I was recently granted the opportunity to review the new wargame Landships: Titanic Battles in the Age of Iron and Steam by Voxelhouse Games Studio. The game was written by Manoel Garcia and will be released in May 2019 on the Wargames Vault. This review is based on the pre-release core book. The game is now available HERE.

Landships is set in the mythical world of Artrusia, which is peopled by Humans, Orcs, Dwarves and Elves. The latter two will be covered in later releases and the core book deals with the Humans and Orcs. There is also a mysterious race known as the Tripeds. All the races of Artrusia are in competition for the miracle ore called Aerolite used to power flying machines and the Landships of the opposing races. In the period before the game's setting was a Great War against the Lords of Oblivion, which left many dead and a continent ruined. Although the races banded together to fight the Lords of Oblivion they have now turned their attention to mining as much of the Aerolite as they can from the blasted continent. This has led to the agreement that wars may only take place in that area, so that the homelands of the races themselves are not affected by more devastation. Think Warhammer 40K meets Steam Punk. 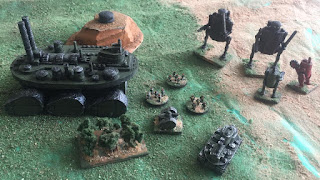 Landships has a well thought out background with plenty of room for development and has what is called a living lore, where gamers are invited to add to the story. I like this approach, things can develop in the world of Artrusia organically through interaction with battle reports and blogs, etc. It feels like it's the player's game as well as the designer's. 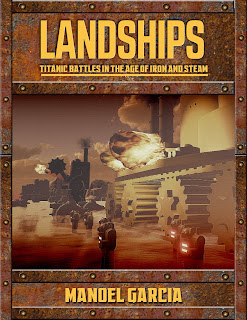 That said, how does it play? Simplicity is the key here along with rules that you can hold in your head. Essentially the game is an IGOUGO, with the player taking the first turn being dictated by rolling initiative dice (unless a scenario dictates the initiative sequence). This dice roll can also be influenced by playing an Action Card. These are specific to each particular race. In this way, you can steal a march on your enemy if you need to! All units have a series of stats, including Movement Class, the maximum amount moved in inches per turn, Structure Points, or the amount of abuse a unit can take, Armour Resistance, which, as the name suggests is how much armour the unit has against hits in combat, any Special Actions and Steam Points amongst others. The latter are points generated by the unit and can be used to play the Action Cards, each of which have a Steam Point cost to play. The Action Cards have various effects on the game: 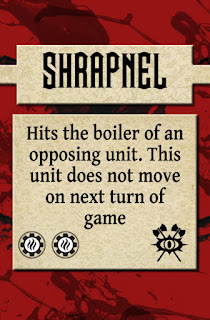 Ranged combat is based on D6 rolls, with the player trying to score higher than the 'to hit' number of the weapon firing with range and terrain have modifiers for the hit roll. Then the attacker rolls the weapon's damage dice, hoping to score higher than the defender's Armour Resistance. If the score is higher, then the difference between the two is amount the defender loses from their Structure Points. Once this reduces to 0 the unit is toast! A very simple process that means you are not looking back and forth between the manual and the table figuring out various modifiers. 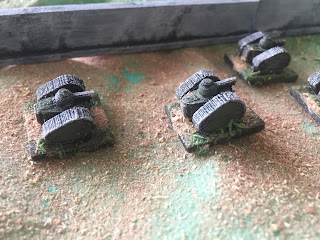 There are many units represented in the core book, including the eponymous Landships, Steam Mechs, Steam Tanks, Infantry, Artillery and the mysterious Tripeds (think War of the Worlds...). More are to come in future releases. Voxelhouse are also releasing a range of miniatures to represent these units, all of which can be easily 3D printed with any home unit. I'm not sure if they are going to be selling the actual miniatures at a later date, but it would be an easier way of getting into the game for many people, as a lot of us don't yet own a home 3D printer. Not that you need many figures for a game anyway, a handful of units on a 3ft by 3ft table seems to be the average scenario size. 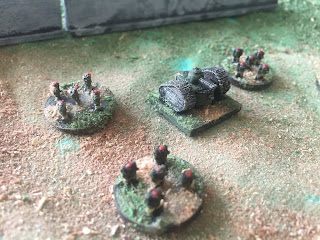 One minor point, as the rule book is written in the author's second language there are occasionally difficult passages, but a couple of readings will iron out any misunderstandings. As a first release, this is a nice looking rulebook with plenty of background fluff for those that like it, some simple rules for what is a fun game set in a genre that has rarely been explored on the gaming table (as far as I know!). Check out Voxelhouse Games Studio on the Wargames Vault for the game's release. (edit) The game is now available HERE.