Continuing with my Star Wars Legion project is this T-47 Airspeeder that I got as part of a job lot. I wasn't intending on buying one of these, but I thought I could do something with it anyway. I didn't want to paint it in the usual snow camouflage, so I went with another scheme instead. 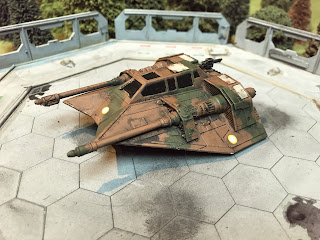 I took my inspiration from British aircraft during the Battle of Britain and gave it a two tone RAF style camo scheme. This was also augmented by the addition of a couple of small roundels, modified to not look too obvious. 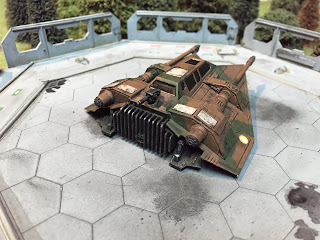 I think that these vehicles are too fast for the table top, so I am going to use it as an objective or scenery piece instead of part of a force. To this end I scratch built a small landing gear to go underneath and to raise it slightly off the ground. Also, I bought a few droids from Heer46 who makes a handful of 'definitely not IP' Legion style figures. These are two nice astromech droids, along with my favourite, the gonk droid. 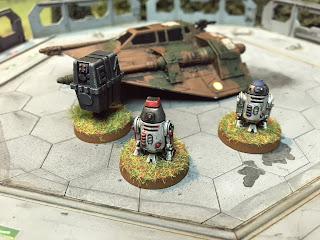 Like the Airspeeder, the droids won't have much use until Fantasy Flight Games produce some new  rules (or make my own), but they are nice additions to a table and bring a real Star Wars flavour to games. I guess they could be used as repair droids or even medical ones.

Don't forget that Storm of Steel is also now on Youtube, check out the channel below and please subscribe: