The final units of the Anglo-Allied army for the 100 days campaign that I have to complete are mostly artillery batteries (apart from the Life Guards). I have already completed two batteries, but they are foot batteries. I also need two Royal Horse Artillery batteries and this is the first of them: 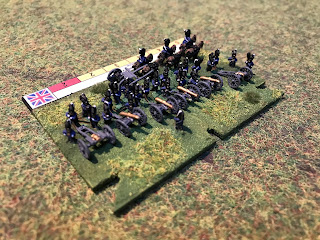 As you can see, the battery has six guns (four 6 pounders and two 5.5 inch howitzers) along with a limber to designate the battery is horse drawn. This also means that the battery has the trait Mobile, meaning it can move and fire in a single turn. A pretty good trait to have for artillery! 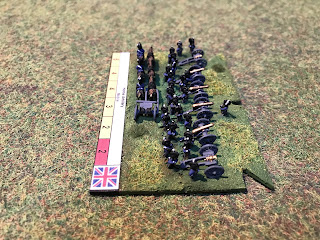 The artillery batteries were one of the reasons that I decided to change the base labels, as their firepower doesn't drop down in a regular fashion as they fire. This was hard to emulate with a dice, so making the base with a tracker will make things easier to follow in a game. 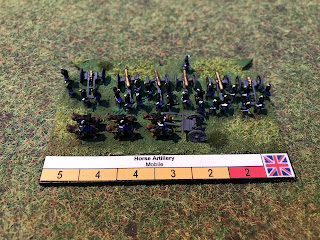 I have another RHA battery and one more foot artillery batteries left to paint to round out the artillery. This is the number of artillery cards that are in Sam Mustafa's 100 Days Cards box, so I am really close to finishing the Anglo-Allied army now!

As this post has been Tangoed over on TMP, for those of you calling in here, please take a look at the new Storm of Steel Youtube channel, which has a lot of gaming content (with much more to come) such as this How To Play video of Command and Colors: Napoleonics: