Recently Fantasy Flight Games released their new Scout Troopers for the Imperial forces of Legion. As one of my favourite trooper types in the Star Wars universe, I just had to buy a box. As with the other white-armoured Imperial troopers they were pretty easy to paint:

There are seven in a box, a squad of five troopers and a two man sniper team. I will probably be using them in this configuration in games. They have skills similar to the Rebel Commandos, using stealth, speed and scouting abilities to move across the battlefield. Their pistol is also pretty heavy hitting at close range.

The two man sniper team also has the ability to penetrate armour and has a low profile making it harder for opponents to target them. 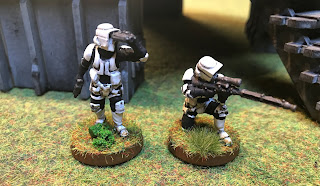 The two man team is fragile, but should be able to give the enemy a run for their money with the long range and hitting power of the sniper rifle! 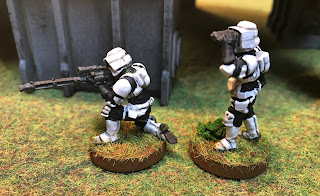 These should be a good addition to the game and I may even fork out for a second squad at some point in the future.

Last weekend, Dean and I went to Fiasco in Leeds, but unfortunately my camera decided that was the day to stop working so I don't have any pictures of the games. However, I did come away with a new book: Decisive Victory by Derek Clayton. It is about the Battle of the Sambre, the anniversary of which is tomorrow. It is generally only known for the death of Wilfred Owen, but it was the British victory was the straw that broke the back of the German army and pushed the German high command into accepting all was lost and signing the armistice the following week. This is the first indepth study of the battle and is very welcome on my bookshelf!