As I wait for the final figures I need for the Anglo-Allied 1815 army to arrive, I finished off the penultimate cavalry brigade. This is the 6th Brigade under Major-General, Sir Hussey Vivian. It was made up of three regiments of Hussars, the 10th, 18th and 1st King's German Legion. 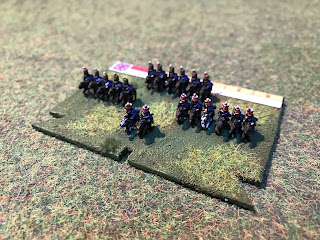 The unit held the extreme left (east) of the Allied line and saw little action until the evening when it was moved behind the centre during the evening. The unit was finally involved in several actions against the retreating French cavalry. 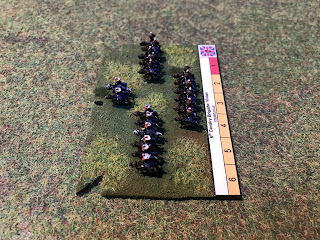 The unit only suffered 208 casualties (of a strength of 1,504), or 13%. The KGL only suffered one man killed and nine wounded, making it the least affected Allied unit at Waterloo. 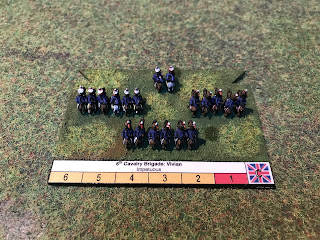 You may have noticed the new base label that this unit has. I redesigned the old labels, as I was never fully satisfied with the dice holder solution and their lack of design generally. So, I sat down and came up with a new label, using the Union Flag and Tricolour, easier to read text and a damage counter that can be marked with a dry wipe pen. 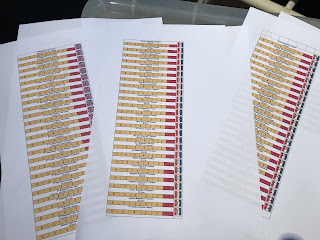 As I use small artillery markers for attached artillery, I didn't need that section either and after laminating the new labels this is how they look on my Brunswick contingent. 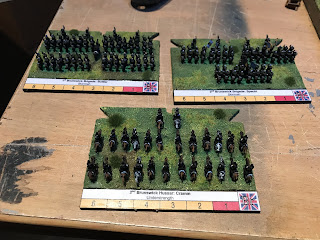 The new labels will make games better, without the fear of dice falling out of their holders and losing track of unit damage. I also think they look cleaner and clearer.