The Great War: The French Army Expansion: A Review

In Britain it is often forgotten for a lot of the First World War the French army bore the brunt of the fighting. The great battles of Verdun are the usual starting point for most people when asked about the French efforts, but they fought from the opening days until the last hour and suffered 1.3m military deaths in doing so. Richard Borg's new French Army expansion for The Great War boardgame from The Plastic Soldier Company enables players to re-fight the battles of the French Army. 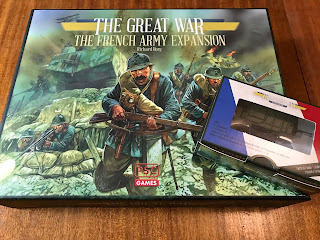 I backed this expansion on Kickstarter when it was first announced in November of 2017 and it has taken almost a year for the game to get published and arrive, thankfully before the centenary of the war's end! Mine actually arrived on Wednesday, but I was away in Scotland, so couldn't get hold of it for a few more days. However, I was not disappointed when I did and here is a quick review of the box contents.

Do remember that this is an expansion and NOT a full game, you will need the original game to use this.

From the striking artwork on the box to the well produced components this expansion has the usual high production standards of PSC. There is a full colour 38 page rule book, with extra rules for the new range of specialists (see below), reference sheets and extra terrain and fortification tokens, along with gaming components such as the new mortar aiming tokens. As with the previous Tank Expansion, the French Army Expansion has new scenarios, this time for the French Army specifically. There are 18 in total and many are set during the struggles at Verdun along with the 1917 offensives meaning you can re-fight them chronologically almost like a campaign. I was surprised to not see any of the 1915 or 1918 battles included, but we may get some of those in future expansions. 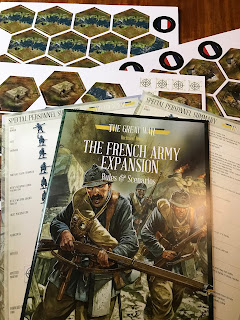 But you can't fight a battle without soldiers and The French Army Expansion includes 125 plastic figures! Unlike the previous The Great War releases these are in bendy plastic rather than the hard plastic that caused a lot of problems when people (including me) snapped brittle bayonets. They are also pre-cut so no fiddling about with sprues if you want to get straight into the action. 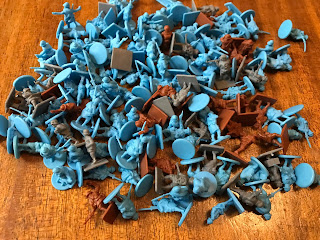 There are 50+ French infantry, mortars and machine gunners all in similar poses to the Germans and British of the original box. The basic figures are mounted on circular bases so they can be easily identified from the specialists. 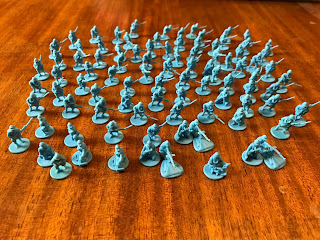 Speaking of which, the new expansion adds new specialists to the previous bombers. we now have elite figures, engineers, flame-throwers, Heavy Machine Guns, heavy mortars, LMG figures, marksmen, officers and spotters for both mortars and artillery (FOO). These come with new rules adding to the existing game giving it another layer of complexity and choice, should you choose to. These figures are all mounted on square bases to set them apart from the non-specialists. 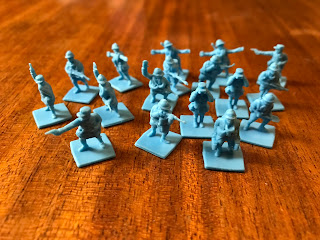 Along with the French specialists, PSC have helpfully added in the German specialists (not the bombers, as they come with the original release). 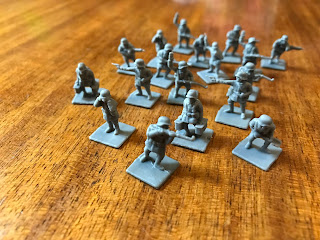 And of course, the British specialists. Both of which are in their national colours. 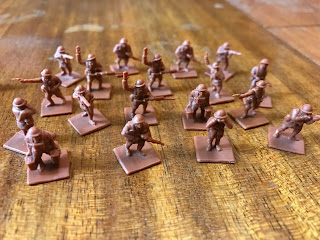 I mentioned that I backed the Kickstarter for this project and as a backer I got a few extra goodies, including two extra scenarios, another set of dice, 1/100th scale tank decals, French tank tokens and a French tank reference card. 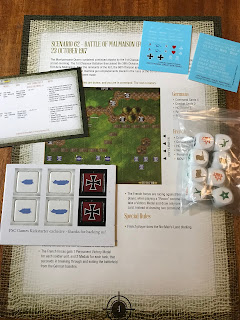 I also bought a box of the new French tanks and they were included in my package. The two tanks are the Schneider CA-1 and the heavy Saint Chamond. Both of these are excellent models, really full of detail and crisp moulding. They are unpainted, but they should paint nicely and it's something I'm looking forward to doing. The models are weighty little pieces thanks to their construction of plastic and metal parts. 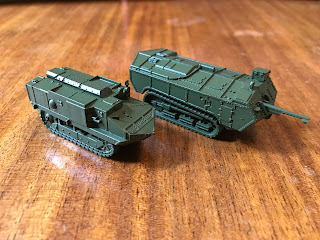 First impressions are of a box full of delights. However, I am not so sure about the bendy plastic figures as they seem a little cheaper than the sprues of hard plastic figures, but they should take more punishment. PSC got a lot of stick about the broken bayonets, so I guess this is the best compromise and you'll always find someone who is unhappy about things. I am not sure whether to base the new French figures for Square Bashing (four to a base, still works for The Great War) and make them into the core for a new SB French army or just use them for The Great War games. I am going to see how I get on with painting them and if the paint is too flaky on bendy figures, I might have to base them anyway.

All in all, I am happy with the new expansion, I am now looking forward to getting a game in to test the mettle of the French!
Labels: 15mm Board Game Review board games French Infantry Plastic Soldier Company Product review Tanks The Great War