The Cold War Board Game: A Review

Warm up the Novichok and sharpen those poisonous umbrellas ready to play The Cold War. The Cold War is the new board game release by the Plastic Soldier Company in the Quartermaster General series. This game drops us straight into the tumultuous decades following the Second World War where superpower blocs fight for control. It was originally produced as a Kickstarter and as a backer, I got my copy last week and the following is a quick review of the game. 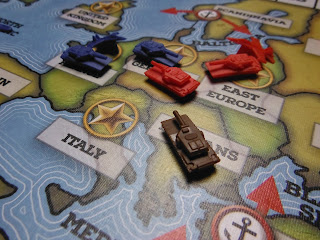 The Cold War follows on from the Quartermaster General: 1914 and has basic rules that are similar to that game and the original Quartermaster General set in the Second World War. However, there are significant changes in The Cold War, which make it a standalone game rather than a re-skinning of a previous mechanic. The designer's notes state that Ian Brody wanted to make this game a three player game and although up to six people could play quite happily, three people would easily take the roles of the the West, the Soviet and the Non-Aligned blocs. Good news for those of us with a small gaming circle! 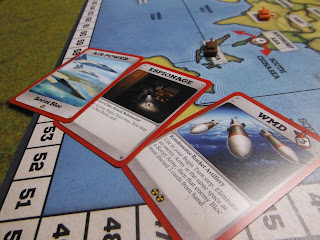 We also see new card types in The Cold War. Air Power cards are used to attack enemies along with the previous land and sea battles. The Espionage cards, which are concealed from the opponents until such time they are used with varying effects. The WMD (weapons of mass destruction) cards which generally attack your opponents hand of cards, reducing their ability to continue the struggle. Most of the cards have historical events or weapons to add to the flavour of the period. 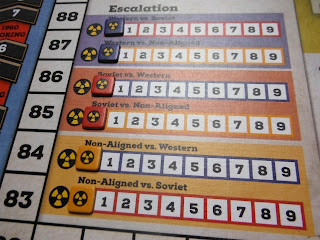 Another new addition to the game sees the escalation tracker, each player's attitude towards their opponents is recorded here and can reduce the cost of using WMDs. WMDs cost victory points to use, but if your escalation is high enough, this cost drops!  Escalation can be affected by espionage, air strikes and other events, meaning you can bide your time as your opponent commits a series of small attacks, then drop the big one! Armageddon was never so much fun! 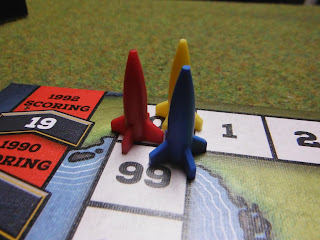 I backed this game on Kickstarter and for that, I got a couple of extras, including the nuke victory points markers above and the extra espionage 'collector' cards below. Any game that includes David Hasselhoff is obviously good. 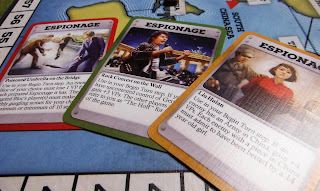 All in all, this looks like a fun game. Not as intensive as Twilight Struggle, but enough flavour and atmosphere to feel like the Cold War. Also, having three opposing blocs means that there should be enough ebb and flow in the game to keep it interesting. I'll give my impressions of game flow when I get a chance to try it out, but for now I just need to stop worrying and learn to love the bomb.
Labels: Board Game Review board games Cold War Modern Plastic Soldier Company Product review