There is nothing better than making Star Wars Legion feel like Star Wars than adding the personalities that are at the centre of the Star Wars universe. None more so than the scoundrel turned hero, Han Solo. 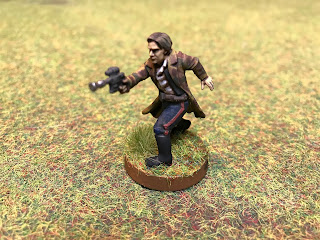 I bought the commander figure to use in future games and painted him in a scheme similar to my other rebels. Han's abilities combined with the cards that come with the figure give him a hefty punch in combat and a good defense. His basic attack with his DL-44 blaster is two red dice (the best dice for hitting) along with the sharpshooter ability that reduces the defender's cover rating! Added to this is his gunslinger double attack and uncanny luck, allowing Han to reroll two dice in defence! 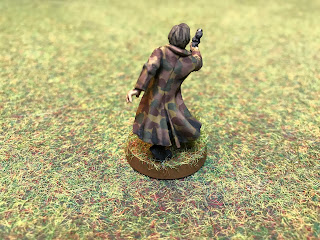 True to the films, one of Han's command cards allows him to literally shoot first: 'Sorry about the mess' gives Han the upper hand by adding an aim token and dodge token to the figure! Among the other cards that Han has is the 'emergency stims' equipment which will allow a unit to delay some wounds until the next turn, keeping them in the fight for longer.

I think Han will be fun to use, he isn't as powerful as Luke, but certainly is useful for the troopers around him; he's hard hitting, lucky and a strong commander figure.

You may have also noticed that I have added a Patreon button to the top of the blog, if you think it is worth supporting me for $1 a month, that would be ace!
Labels: Fantasy Flight Games Legion Product review Rebels Science Fiction Star Wars