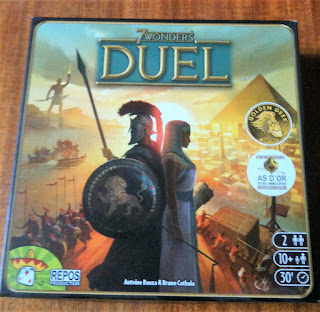 Each game of 7 Wonders: Duel is split into three ages, defined by different age card decks and the advancements therein. The cards range from simple building stuff, bricks, wood, stone, for example, mixed in with economic and scientific cards, along with military developments. The card abilities get better as each age develops, adding a nice flavour to the game that feels like progression.

In each age the cards are laid out in three different stacks with players only able to draw a fully revealed card at the bottom of the stack. Revealed cards can either be taken by a player (if they can afford to pay for the card) or can be discarded. Taking a card adds to a players' civilization and gives benefits in future turns. Discarding a card gains the player gold coins and it's a quick fix if the player needs cash, can't afford any of the revealed cards or wants to get rid of a card they know their opponent wants! 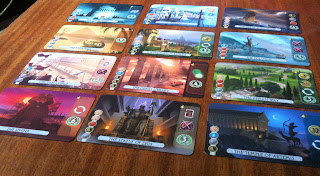 Alternately, a player can take a card to build a wonder. Both players begin with a hand of four random wonders, but only seven can be built in a game (hence the game's name!), so the first player to build their fourth wonder has an obvious advantage for the rest of the game and in the final scoring! Building a wonder is always beneficial and should be a priority!

There are three ways to win 7 Wonders: Duel; a points victory calculated from the cards you have collected and their benefits; a military victory by overpowering your opponent; a scientific victory by collecting enough science tokens. Most games we have played have ended in a points victory, but a ruthless general could quite easily go for the throat! 7 Wonders: Duel is a simple to learn, yet involved game that gets better with each play as you learn the card abilities. This development allows you to progress as a player and make better choices in each new game. 7 Wonders: Duel fits a niche if you want to play a quick game or two, or fits in nicely at the beginning or end of a longer gaming session. It's highly recommended.
Labels: Board Game Review board games Card Games Product review