Dantooine, They're on Dantooine, A Star Wars Legion AAR

Having completed the figures form the core box of Star Wars Legion, I've been eager to try out the game properly. On Sunday Ninjasaurus Rex and I met up to fight an introductory game, using the basic elements of two squads of five Stormtroopers and five Rebels, with the Rebel AT-RT and two Imperial 74-Z Scoutbikes, with Luke Skywalker and General Veers as commanders. It was a meeting engagement with the winner being the one who survived after six turns! 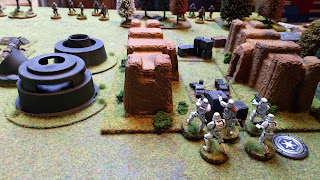 The first move saw my Stormtroopers advancing and occupying the defensive positions around the junker huts. As the Rebels also advanced, I set my other unit of Stormtroopers on stand-by to catch any Rebels unawares. 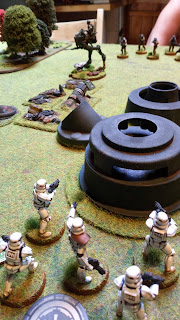 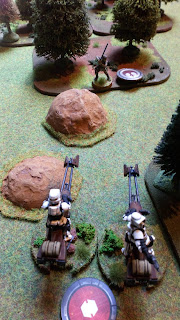 Quickly closing on them he cut the fins off one of the bikes and sent it spinning into a tree! 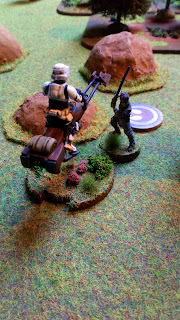 I was having better luck in the centre of the field as my Stormtroopers almost destroyed a Rebel unit, by killing three of them! 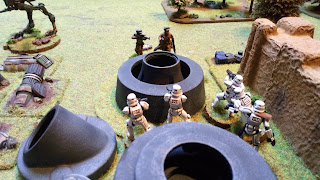 Escaping the dreaded lightsaber, my second Speeder Bike made an attack on the AT-RT, but only damaged it. 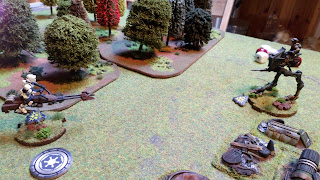 Another unit of Rebels moved into cover and started exchanging blaster fire with my other Stormtrooper unit. 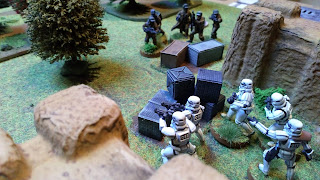 Losing the second Speeder Bike to Luke's lightsaber, Veers moved up to support the troops, who were trying hard to destroy the Rebel unit. They were only causing suppression though and the AT-RT began threatening their flank. Using it's flamethrower, the Rebel scum took down two valiant Stormtroopers... 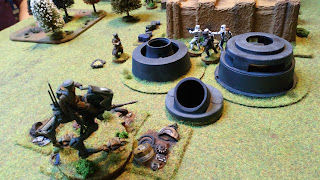 The second unit of Stormtroopers had also taken heavy casualties and decided that living was the better part of valour and retreated behind more cover. 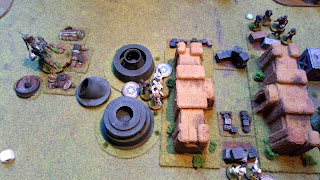 The AT-RT moved in closer to the sheltering Troopers... 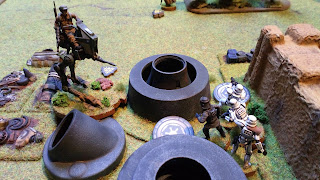 ...And killed the remaining three whilst also wounding Veers! 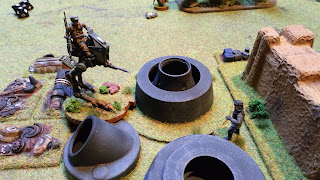 Sensing victory was close the Rebels moved in against the remaining Stormtroopers. 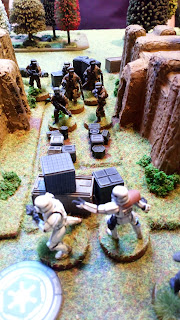 Veers joined the remaining two Stormtroopers, but was unable to add much to their defence. 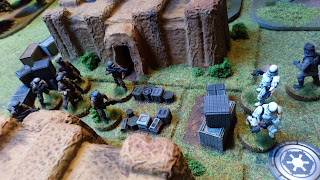 As the villain in the movies always attempts to escape, so did Veers. He ran as the Rebels closed in against the last surviving Stormtrooper. 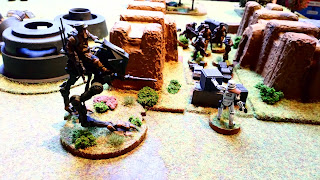 A valiant, but futile death in flames awaited him! 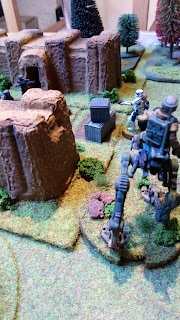 The Rebels gave the Imperials a good kicking and ended the game on turn 5. Overall, it played very well, it took about two turns and we had the rules in our heads and things flowed much faster. We both agreed that we liked the movement rules, which see the unit commander moving and the rest of the unit conforming to him. The combat was fast and effective and the heroes did as they should have done, especially Luke with his single handed attack on the scout bikes. However, the 'heroes' weren't overpowered and didn't unbalance the game. Luke acted as you would expect in combat, for example.

Using a small force and a small table obviously has it's limitations, but we were able to use basic tactics which removed a lot of the usual meeting engagement limitations that gamers face. With Luke being off on the flank attacking the speeder bikes it made it difficult for the Rebels to coordinate their attacks initially.

This was the very, very basic game, so it will be interesting to see how it changes with the addition of more command cards, heavy weapons and other character skills, but it's very promising so far!