The last unit for the Anglo-Allied reserve Corps is the 7th Brigade of 7th Division. This unit was made up of the 2/25th (King's Own Borderers), 2/37th (North Hampshire) and 2/78th (Highlanders) and was commanded by Major-General Kenneth MacKenzie. 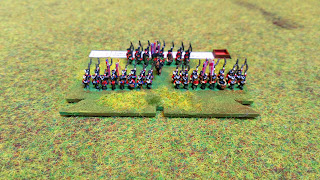 The 7th Brigade was made up of the 2nd Battalions of the parent regiments and was on garrison duty during the time of the 100 Days Campaign and took no part at all in any of the fighting during June 1815. 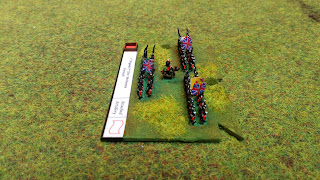 It's an average British unit, with an Elan of  6 and the skirmishers that are found in most other British units. I have included it as I am replicating Sam Mustafa's 100 Days Campaign Cards set for Blücher and it can be attached to other Corps in fictitious battles. 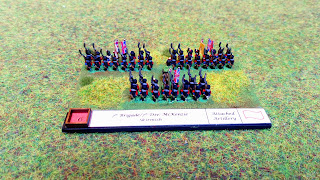 So this unit brings the Anglo-Allied Reserve Corps to a finish and with it all the infantry that I need for the Anglo-Allies. Here is the Corps all together: 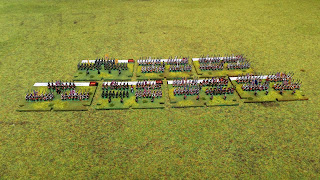 Just the Cavalry Corps to complete now and the Anglo-Allied Army will finally be finished! Then I'll be swapping back to the French, to try and finish them off! I have no idea how long that will take, but stay tuned for developments!

In other news, I have started a Facebook Page for this blog, please give me a like HERE.
Labels: 6mm Baccus Infantry Napoleonics Waterloo Wellington