Into the Valley of Death

This weekend, I met up with Ninjasaurus Rex for a game of Cross Fire of Irony, the modern/near future rules he has been writing for about a decade. Maybe one day he will publish them on his blog, but until then you'll have to take my word for it that they are a heavy reworking of the Cross Fire World War 2 rules.
There isn't much left from the original rule set really, just a couple of mechanics n moving and firing.

He wanted to try them out and as he had recently completed some work on Soviet and Afghan figures we thought we'd have a bash at a small skirmish in the 1980s Soviet/Afghan war. It was also a chance to use his excellent terrain: 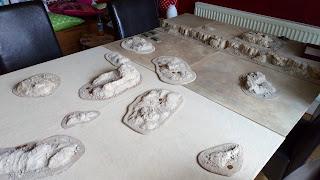 The forces were split equally, he took the Soviets in their BMPs and I took the Afghans. The Soviets would win by getting off the edge of the board, along the 'road' that ran from one end to another. The Afghans had to stop this happening anyway possible. I was also allowed to use hidden positions to set up in the rocks and so I spread my forces out along the path of the road. I was heavily armed with mortars and RPGs along with the usual bolt-action rifles. 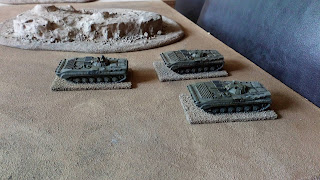 The BMPs began their scouting mission and moved into the valley bottom. This movement allowed me to react and I unveiled an RPG group on either side of the road. 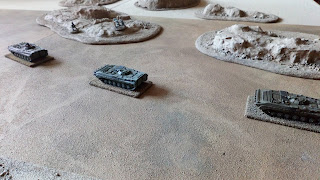 On the cliff face, I revealed a mortar team, who was being directed by a spotter on the valley floor. 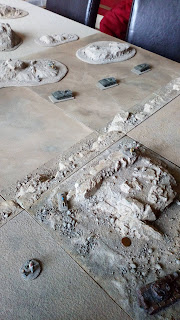 My first RPG shots had no effect and I lost control of the turn, so he quickly debussed the Soviet infantry on the BMPs. 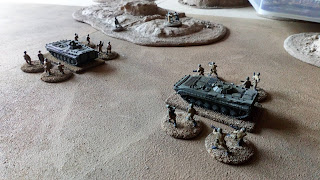 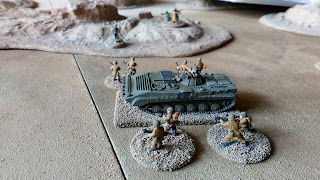 This allowed me to react to is movements and I let loose with the RPGs again, this time disabling the front BMP. 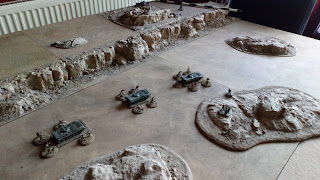 Another salvo of rockets took out the second BMP and mortar fire pinned and suppressed the Soviet infantry around the front vehicle. 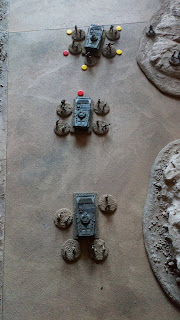 If you are able to pass a test you retain control of the turn, so I continued firing rockets and destroyed the last BMP in the column. 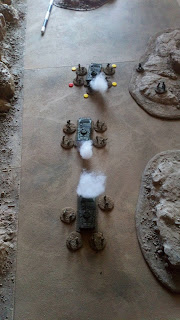 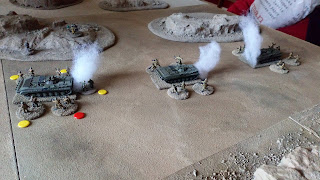 Laying down more mortar fire from my high positions, I was able to take out a base of Soviets. 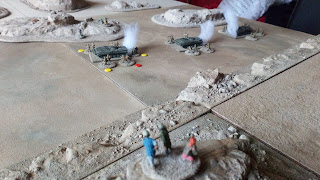 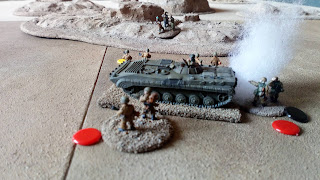 However, it wasn't all to go my way as he managed to get control again and with the heavy fire power of the Soviets managed to destroy all the Afghan units he could see. 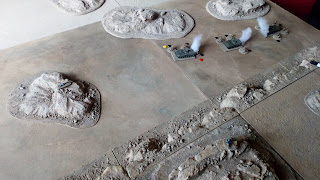 I still had a rifle group and sniper in the rocks though and they were making themselves known by taking out the front Soviet section and threatening the platoon commander. 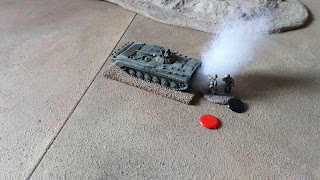 However, we ran out of time (I had to go and feed the cats), but the final stage looked like this: 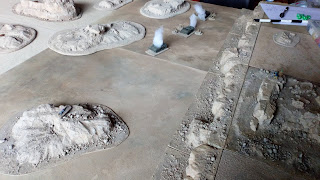 The Soviets had literally not left their starting positions and had been shot to pieces in the valley bottom. The remaining Soviet infantry were going to have to try to get off the board on foot, and with the rest of the table fat with Afghans it was going to be a difficult journey.

The rules worked well, he is still hammering out a few bits here and there, but overall it worked well. It seemed like it would be an Afghan walk-over, but as soon as the Soviets got back in control it tipped in their balance. However, it was still an Afghan victory!