Welcome to the 500th post of this blog! Blimey, doesn't time pass fast!?

I arrived home on Friday to find the new Star Wars Legion box set had arrived! I ordered it on Tuesday as I had come into a little bit of money recently. As with all Fantasy Flight Games it is excellent for its production values alone. Everything looks great and all the figures were sorted into separate bags so that their associated tiny parts don't get jumbled up together. 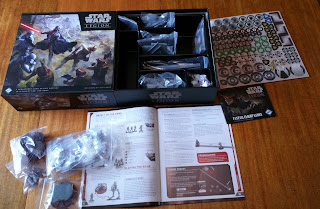 Obviously, as it has only just arrived I haven't had a chance to play it yet, but I have read the rules and it seems very similar to X-Wing, another great Star Wars game by FFG. Each unit has a unit card with its abilities. Units can be a group of troopers or an individual character (in the core set it is Luke and Darth Vader, obvs). The game takes place over six turns and in each turn players take turns in choosing individual units to act, in a slightly less clumsy IGOUGO system.

Combat is decided by the players taking a pool of dice equal to the firing strength of the the unit and their weapons then counting out the hits, minus the defence dice rolled by the opposition. The number left over is the amount of wounds caused on a unit, with most troopers only taking one wound each. Pretty simple. There are cards to increase attack and defence dice, so that can change the landscape of combat nicely.

Also, movement is handled very well, only the unit commander moves and the rest of the unit are placed within a certain distance of him at the player's discretion! This does away with lots of time consuming individual movement and is an excellent solution to moving large numbers of figures. Vehicles have their own rules as well, but work as smoothly as the ground troops, it seems.

This streamlining of rules is a welcome relief as I have played Star Wars Miniatures Battles in the past and although it is a great game, it is very much of its time with a lot of bookkeeping. SWL does away with that by keeping the information in simple form on unit cards.

So, what are the pros and cons of the game as I see it? Well, let's start with the cons:

A lot of people have argued that the figures (at 32mm) are too big to use with other FFG games, like Imperial Assault. This may be true, but I don't have IA, so it's not such a great concern for me, but I did think the choice of scale is a bit strange when there is an already massive 28mm market out there that this could have been tapped into.

Some of the rules mentioned in the rule book are online; this was slightly disappointing as I would like everything gathered in one place in the core box. That said, I understand the need for a 'living rulebook' and updates are easier on the net. It seems to be something FFG are moving more towards anyway, and I can only see other companies following suit in the future.

The plastic figures are not very convertible and you get two sets of seven figures for each side that are the same seven poses. In the age of multipose plastics this was perhaps the biggest disappointment. In a skirmish game I like to see each figure in an individual pose, it also seems that expansion sets suffer from this monopose issue as well. Even Games Workshop have got this right.

And finally, people have said it is not a full game. It is, it is just a slimmed down version of the recommended 800 points game which seems to tap into the 'buy more plastic' market of collectible gaming. I'm not a massive fan of using points in games and prefer real life unbalance anyway, so this is not such an issue for me, but it may affect some people's choice of playing, especially as it also seems geared towards tournament play, which I don't like.

IT'S STAR WARS! It's a fully licensed Star Wars game so that means no scouring wargaming companies for Star Wars stand-ins. Everything looks like it does in the films!

The figures are really nice sculpts, there are lots a detail and they go together really easily (use superglue though! Polystyrene cement will not work with the plastic). The poses are well thought out and look realistic, the Speeder Bikes in particular are excellent.

High production values. As mentioned, you get what you pay for with FFG, the price tag may be high, but you see where your money is going.

The rules are simple, well written and look like a doddle to hold in your head once games begin. This is great bonus for us hard-of-thinking folks who prefer to spend a game playing rather than looking up the angle of deflection of a particular armour plate versus velocity and trajectory of a HEAT round in cold windy weather at night.

It's an actual wargame, not a board game. I had been put off Imperial Assault as it looked too board gamey for my tastes. I like board games a lot, but it didn't seem to suit the Star Wars universe (you may disagree with me on this). I wanted to play a sandbox skirmish, so that is why I initially went for the more complex SWMB. Legion perfectly scratches that itch.

And finally, IT'S STAR WARS!! That can't be said enough.

I mentioned the figures and I was eager to get started with painting them, rather than reinventing the wheel, I watched a few tutorials by Sorastro on his YouTube channel (there's some great general painting tips there as well). I pulled out the two Stormtrooper commanders and they took me about an hour to complete. Here they are: 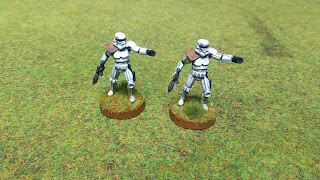 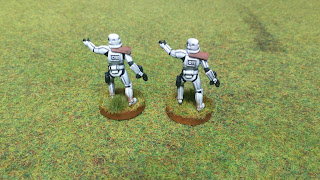 They are not perfect, but are a gaming standard and I'm happy with them. So, all in all, a highly recommended game, bursting with Star Wars goodies and what looks like hours of good times ahead. Check back in the future for some AARs and a better discussion of the rules. If you are interested in the game, you can buy it through this link:

Doing so will take you through my Amazon Associates account and I'll get a small cut, which will help me write 500 more blog posts!