Last weekend was the 100th Anniversary of the Battle of the Lys, known by the Germans as Operation Georgette. It was part of the wider German 1918 Spring Offences more commonly known as the Kaiserschlacht. Overall the operations achieved great results very early, but the logistical organisation of the German army was not up to the task and they quickly ran out of steam, helped by the stopping power of the British and French armies. Also, strategically the operations were aimless, it really was a last desperate gamble by the German army to win the war and it didn't work.

The Battle of the Lys opened with a two day barrage on the Portuguese army who were holding part of the Allied line. Tired and demoralised the Germans cut through their defences initially. The Square Bashing scenario we were playing was based on this attack. Ninjasaurus Rex took the German attackers and I had the British (Portuguese) defenders.

The German attackers consisted of:

The British faced them with:

There were four objectives that the Germans were aiming for: the crossroads, two urban areas and a wood. I figured that my defences wouldn't be strog enough to hold all four, so I packed out the two urban areas and the wood with infantry and MGs. After depeletions my line looked even weaker... 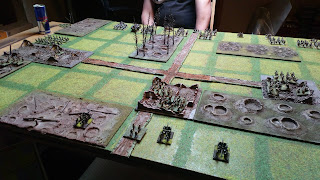 Looking across the field the German army looked very strong... 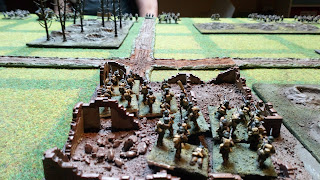 The German Stormtroopers were set up after the defenders had organised their line, and they faced off against the depleeted British battalion in the woods objective. 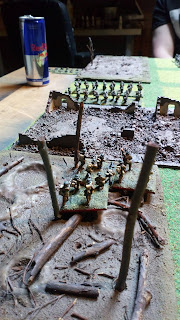 The first move was opened by the Stormtrooper attack, they charged across the ruined villages and attacked both the woods and the MG based in the ruins. 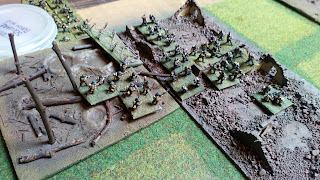 Despite their extra five dice in the attack they failed to penetrate the British defences and my men stood firm! 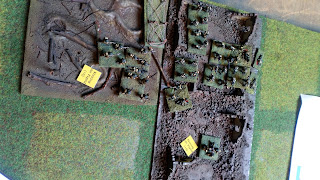 A German Point Effect Barrage landed on target and disrupted the British rear where the HQ and field guns were positioned. 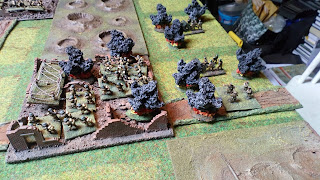 Meanwhile the main German assault began with the battalions streaming around the broken ground. 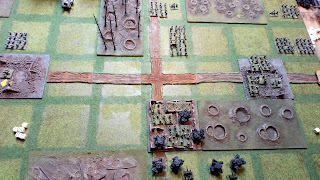 In my first turn, I held fast and all my attempts to bring in support failed! Next, a German aircraft appeared to threaten the soldiers in the village ruins objective. 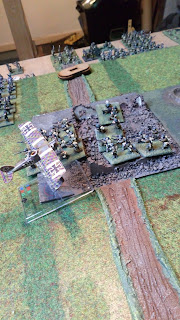 The German troops got into position to assault the objective: 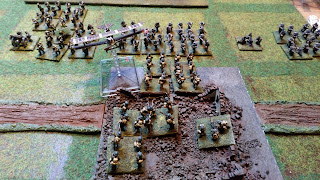 I had brought in reinforcements on my left flank to bolster the defence of the woods, meanwhile the German attacks were trying to break the line, only damaging the MG in the ruins. 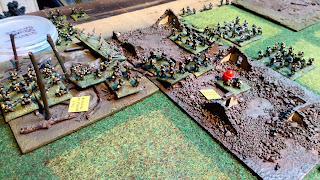 An unrelenting  German artillery opened up again and a rolling barrage landed on my defenders, further disrupting my defence efforts. 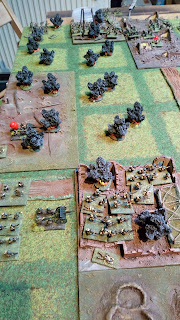 On my extreme left, a new arrived reinforcement battalion took a heavy hit from the artillery, causing two casualties! 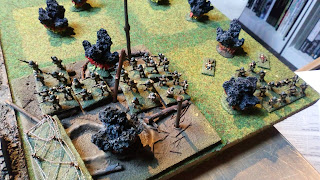 Meanwhile, a German Beutepanzer was making it's way slowly across the field. 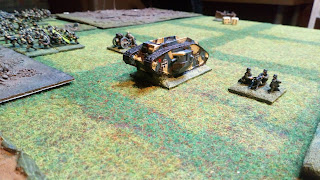 Heavy fighting in the village objective on the British right flank was causing casualties amongst the defenders. 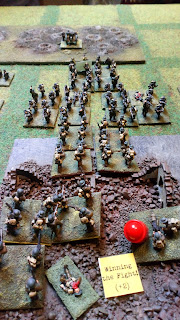 Finally, my messages got through to the artillery and a suppression barrage halted the German progress on my right flank. 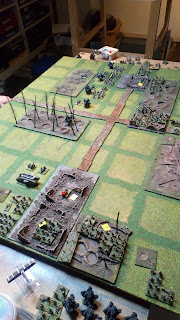 It didn't help though as the German attack forced the British out of the objective by attacking in the flank. 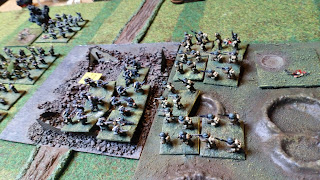 On the left flank more Germans crowded into the ruins to attack the woods. The defenders there were still holding out though. 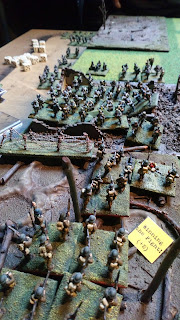 It wasn't going well, with the crossroads quickly falling to the German attack, they now held two of the four objectives. 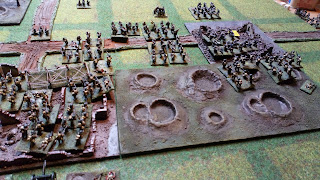 And quickly afterwards, the woods fell to repeated German assaults! 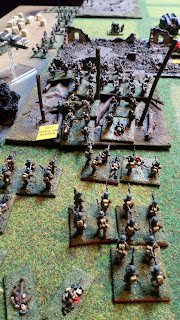 I did get help from a circling Bristol Fighter, but I feared wasn't going to swing the battle. 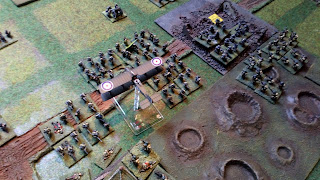 The British defenders in the final objective steeled themselves for more assaults, and held off the attacks. 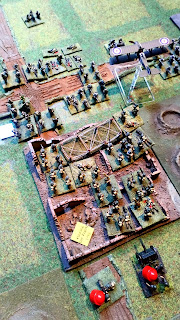 Bringing up reinforcements, I was able to add an MG to the right flank, but they wouldn't be great if I was to get the village objective back. 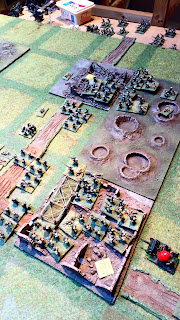 Another German attack saw them gain more casualties and fail their morale to fall back away from the assault lines! A breather for the defenders! 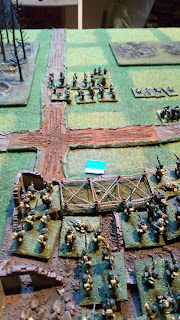 It wasn't for long though as more Germans fileld in the gaps in their lines, also attacking from the flank. 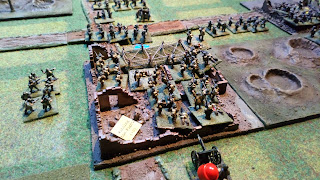 In desperation I attacked the village objective on my right flank, the outcome was more casualties for the British though. 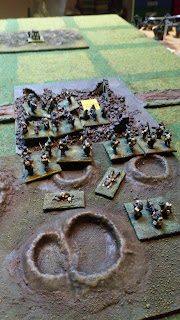 Then it was all over, the countdown timer was reached and the game ended. The Germans held three of the four objectives, so it was a German victory! 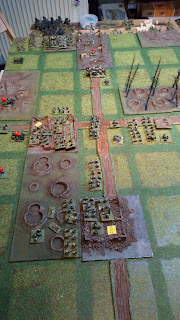 Normally, Square Bashing favours the defender, but this can be weighted by overpowering numbers. In this case, Ninja's Germans hit their targets with overwhelming numbers to capture them. It wasn't easy, but a couple of blows was enough to dislodge the defence. Once a defender has been thrown out of a position, it is very difficult to take it back, unless you are able to gather enough reinforcements.