German and Soviet Artillery for Rommel

As I have played a lot of Rapid Fire! over the years, I have never really had much need for the bigger artillery pieces as RF usually uses smaller field guns and anti-tank guns and rarely needs much bigger pieces. However, Rommel is a higher level game so artillery is also on the larger side. This prompted me to buy a couple of pieces to up my game.

The first up are these two German 10.5cm leFH18 from Forged in Battle. Each come with five crew and are really nice models. 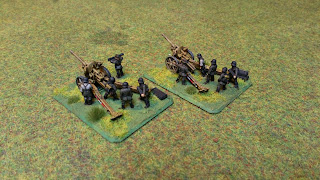 I painted them in Middlestone so they can be used for mid to late war (I have a couple of others in grey that I got for Stalingrad). The FiB models are really nice and crisp with a lot of detail. I added a couple of Plastic Soldier Company's shell boxes to round out the bases. 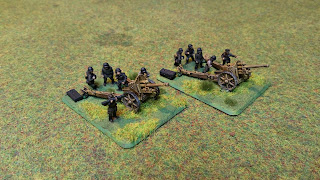 Facing them on the other side of the hill are these two Soviet 122mm obr 1938 howitzers. 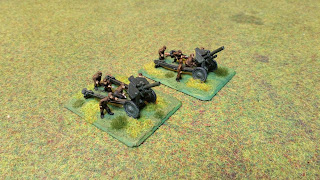 These two pieces came from Battlefront and again are full of detail, like the extra shell cases. 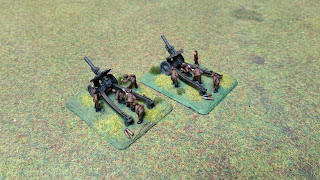 These will add a bit of firepower to future Rommel games and means I don't have to use proxies anymore!

In other news, today is the 100th anniversary of the Kaiserschlacht; the series of German spring offensives on the Western Front. The German army initially smashed through the British and French lines, but ultimately it was a desperate last roll of the dice to end the war in a favourable position. However, the offensives were without an overall strategic goal, quickly ran out of steam and was stopped in many places by the defenders and all gains were quickly retaken later in the year. 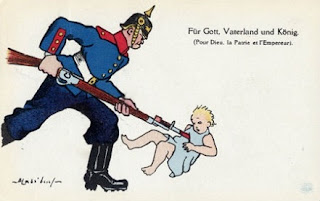