Along with the wrecked vehicles I found in a box, there were also a couple of other non-wrecked vehicles. So I dealt with them and added them to their respective forces.

The first up is is this 75mm GMC M3 from Battlefront, again bought by Ninjasaurus Rex and passed over to me to paint. It's a resin body with white metal gun, wheels, tracks and crew. 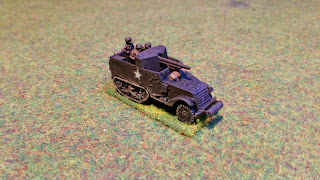 I added some stowage from my big box of stowage and it was done. These were used as an early tank destroyer, using a French 75mm gun as a stop gap. The M3 TD was quickly obsolete after the fighting in North Africa ended, but a couple ended up in Italy, so it will be added to my small American force for Rapid Fire. 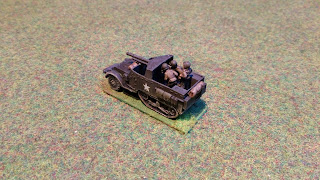 Next up was this Command Decision SDKFZ 251c. I had bought this as a bridge layer vehicle for Stalingrad, but only ended up using the bridges on a Plastic Soldier Company 251 and the body of the halftrack stayed in the box. Until now: 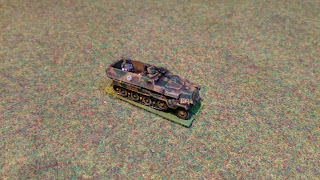 I painted it in the late war three tone camo pattern and added a few PSC crew to round it out. 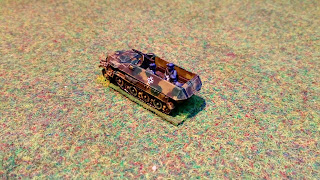 I think that you can never have too many Hanomags!

In other news, I am selling a few bits and pieces on Ebay, have a look by clicking the links below:

If you click on the link to see my other items, I am also selling some Judge Dredd books and comics and 2000AD and Batman comics.