After finishing the Berlin House recently, I started work on some of the Commission Figurines buildings that I have had sat around for a few years. The first one I chose was the Potsdamer Platz building. This is a lovely model and very highly detailed, but only on the exterior.
So my first job was to cut out a piece of embossed plasticard to fit on the floor space (you'll never see this as it's covered with rubble, but I know it's there...). I also took some matchsticks and glued them around the areas where the floors would have been, as though they are the remains of joists and other architectural features. The interior was then painted, with each floor having a different colour to add some interest. Finally, this was all washed with oil paints and weathered before glueing the walls together. 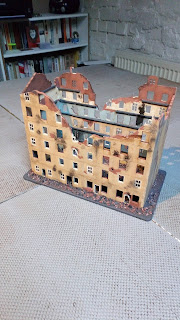 I used polyfilla to seal up the joints in the laser cut MDF at the corners of the building and painted the whole building in Iraqui Sand, with window frames and doors picked out in Pale Sand. I also painted in the exposed brickwork and lined the windows that were missing frames with brick coloured paint. Then this was glued to the base. 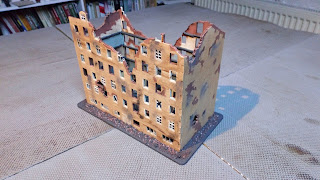 My next job was to add the rubble, which was dead easy as I have a ton of home made rubble in a few different colours. All I did was paint the areas that were going to have rubble on with PVA glue then tip the rubble mix over them and let it dry! In the meantime, I put a load of broken matchsticks into a black mix of water and tempura powder and let them soak up the colour. Once these were dry, I added them as burnt and broken beams. I didn't make enough, but I have another batch drying now, so I will add more at a future date.  The final job was to add weathering powders to the exterior, which took no time at all and it was all done! 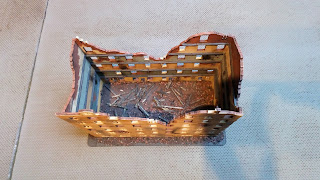 I have two more of the Commission Figurines buildings on the build pile and have started assembling one of them, but as I am away with work again next week, I think it will be a while before I get a chance to tackle it.

In other news, Dean has started a blog about his Spanish Civil War project that he has spent the last few years working towards (longer than the actual war...). Read it here: To Meet Within the Sund of the Guns.