I've had Rommel for a while now and have been itching to try it out properly. All my chums have been busy for the last few weeks though, so I thought I'd try a solo game using a Soviet and German force, each of 100 points. I used the scenario number three in the book, which is the meeting engagement, with four objectives to be captured.

The Germans had three elements, two infantry brigades each supported by a StuG and a Panzer Brigade mainly of Panzer IVs, but with a couple of Marders thrown in. The Soviets faced them with four elements, two rifle brigades, a small motorized infantry brigade and a armoured brigade of T-34s, KV1s and T-26s. As per the scenario, I separated each force in half and left one half off the table as reinforcements. Then I set the table up: 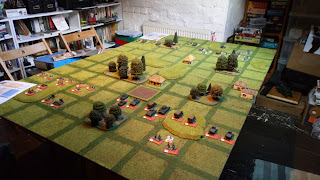 The first couple of moves saw the German infantry advance on their left flank, whilst the armour sped forward on the right. Meanwhile, the Soviets inched forward, using mutual protection. 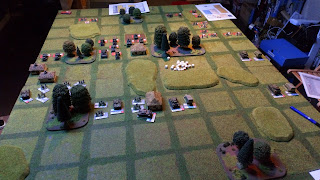 Then the first clash occurred outside the small village. The first German assault was repulsed by the Soviets, who immediately counter attacked. You can see that some of the German units are 'tipped' which means they have taken an action (in this case an attack) which means that they are now at risk and half their combat values. Units untip at the start of their turn, so it means that you have to act fast to attack a tipped unit. 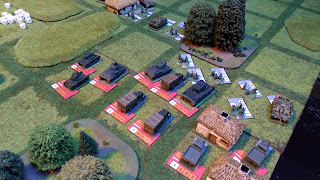 Although the Germans were tipped, they stood the Soviet armour assault and the Soviets fell back. The stacking value of a square is three units, so the KV1s had to fall back behind the other tanks. The motorised infantry could stay where it was as it was already in a square with two other motor rifle units (the trucks). 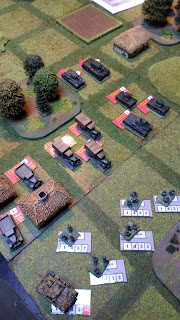 Then as the Germans were untipped at the start of their turn, they went into the attack again, this time supported by StuGs. In armour attacks, one side ha the armour advantage depending on how good your tanks are compared to the enemy, in the attack the StuGs are as good as the T-34s, so neither had the advantage. However, StuGs, along with other tank hunters are better in defence and had the Soviets attacked the Germans would get an advantage, which means that they cause an extra casualty on enemy armour. 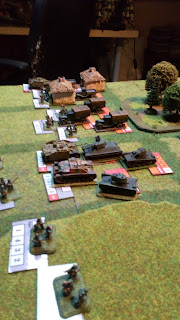 In this case, the attack was repulsed. The game is a game of attrition, given it's high level and it means that attacks seem desultory, especially when there are the maximum amount of units in a square. However, units soon take hits and get slowly ground down to breaking point. 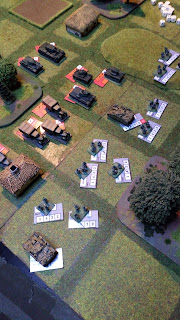 On the German right flank, the Panzer IVs and motor infantry were grinding away at the Soviet defenders with little luck on either side. 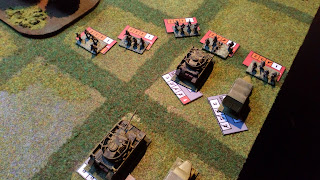 Back on the other flank the fighting was still vicious with little gained, but everyone taking plenty of hits. 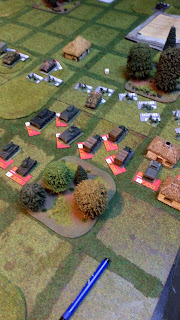 Until the tipping point occurred and a combined attack from infantry and StuGs broke the defending Soviet motor infantry! 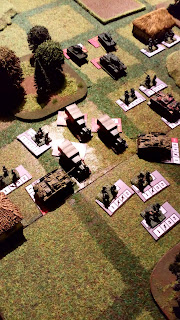 However, the Russians rolled for their reinforcements and they appeared on the table! 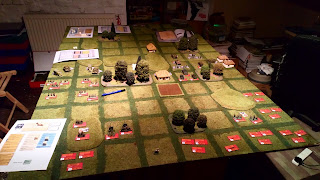 I stopped the game at that point, it was five moves in, the German's right flank was crumbling as the Panzer IVs were battered and broken, but the Soviet right flank was also starting to give under the continual pressure.

It was a very enjoyable game as a tester, the rules were simple enough to be held in your head for the most part (there was a few things I forgot, like the optional extra tactical movement phases, for example) and the grinding of attritional warfare works well at this scale of game. I found the Command Post sheet to be too big to sit on my table, especially when it was full of dice, so after this game I remade the German and Soviet ones as a deck of cards instead (you can find a link to the PDF of them on this blog post HERE, print them in their nations colours and laminate them for use).

I also found it helped a defence by packing a square with the maximum amount of units (three) as they hold on for a long time, and the attacker needs to have fresh waves of units, plus artillery support, plus the support offered by the tactical Ops choices to have a good chance of breaking the line. Basically, it needs combined operations, as the Second World War did.

I'm looking forward to trying the game out properly against another opponent. Thanks for reading!
Labels: 15mm AAR Germans Rommel Soviet WW2