I was going through some boxes the other day and came across these Plastic Soldier Company M3A1s that I bought a long time ago but had forgotten about completely! I thought they would make an nice addition to my small American forces (something I intend on expanding in the future) to give them some armoured transport.

As with most of PSC's kits they went together really easily and construction was not a difficult task. 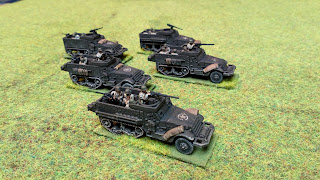 There is some nice stowage included in the kit and the detail is crisp and clear on the vehicles. Also, the crew are nicely posed and fit in their places well. 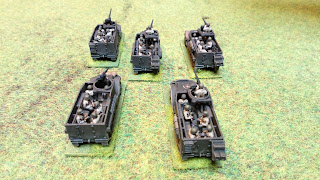 As with most PSC kits there are a lot of variations that can be used to make different vehicle types. I went for the M3A1 versions, with the winch and armoured machine gun position. 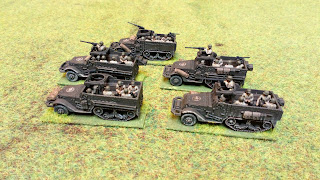 As I mentioned, these will be used for my Americans, they can be used separately in Rommel to designate armoured infantry or Rapid Fire to transport the infantry.