'They Got the Rose and Crown'; Battle of Britain First Play

On Sunday Ninjasaurus Rex and I got together to have our first game of the new Plastic Soldier Company board game Battle of Britain. Obviously, this was a chance for me to break out my vinyl of the Battle of Britain film soundtrack. 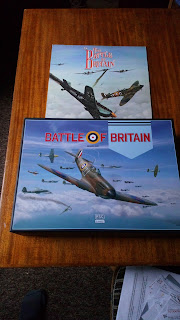 Each turn is split into seven phases, beginning with the British production and repair phase. This allows the RAF to use the functioning cities to help repair any damaged aircraft, airfields and radar stations by rolling dice. Next up was to deal out the squadron cards for each flight of each RAF Group and Luftflotte. Here the British get three cards per flight and the Germans get six. These cards represent the different aircraft used by the opposing sides. Then the Germans deal out their mission cards, check them and assign the missions to their flights. Obviously, the idea is to try to give the mission to the flight that is most likely to achieve it, by being close or having the hitting power to knock out the target. 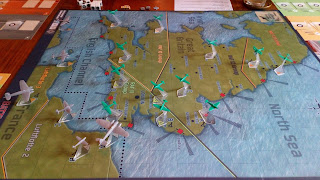 With all this over the Germans get to move. The German aircraft have a three token fuel limit that dictate how long they can stay on the board, but they get to move up to five squares for one the use of one token so most places are within reach. Actually, this isn't the full story because when the Luftwaffe aircraft move into a square covered by British radar they have to stop. The RAF player then gets to decide if they want to intercept the German flight with an RAF flight that is close enough. If the RAF decide not to, the Germans can continue moving towards their targets. However, the radar screen covers the entire British coast and the Luftwaffe have missions to knock out these stations and create gaps in the defence. Until gaps are made, they are halted at the radar screen wondering if the RAF will pounce. 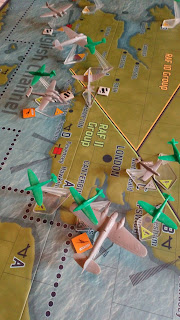 Next phase is the RAF movement, this applies to all RAF squadrons that haven't intercepted the Luftwaffe at the radar screen. The RAF can move up to three squares, but don't have a fuel limit. The RAF use their movement to move into a dogfighting position with the Luftwaffe, but they are limited to five combats per turn, so they have to choose their targets carefully.

Once the RAF movement is done, the game moves onto the aerial combat, consisting of the previously mentioned interceptions and dogfights. The dogfighting combat rules are simple and elegant. Each player chooses a squadron to fight with and they reveal them at the same time. Each aircraft has an attack strength and damage strength and the attack strength is the number of special dice you roll in combat. These dice are in two colours, white for the RAF and black for the Luftwaffe and on each dice are a set of symbols, three RAF roundels and one cross for the Germans and three crosses and one roundel for the British, the remaining two faces being blanks. In dogfighting the player who rolls the highest amount of their opponent's symbols is the winner and they inflict damage on their enemy's aircraft. If this amount equals or exceeds the enemy's damage strength, the squadron is shot down. The Germans lose their permanently, the British planes go into the damaged pile of their group (and may be repaired in the first phase of the the next turn). If there is a tie or not enough damage caused then both planes go back to their flight's box in the player's area. Otherwise, the winning side's plane stays in the dogfight and fights the next opposition squadron. This continues until one side has no planes left in the fight. 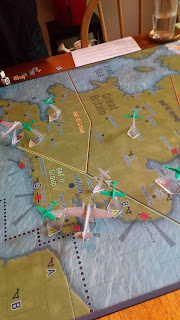 If the RAF have any intercepts then the fighting is vicious and devastating. The RAF player uses the three cards in his flight and draws three random cards from the German player's flight. The attack strength of the three cards on both sides are counted and this is the amount of attack dice rolled by both sides. In the intercept any amount of damage is enough to destroy the enemy. In a typical three squadron versus three squadron intercept, two squadrons on both sides will be downed. In a dogfight only one squadron will potentially be destroyed, in an intercept all six squadrons could be downed! It's particularly nasty if the RAF player manages to draw three German bombers!


Once the combat is over, the RAF have the choice to land their squadrons, this will help them in future to re-equip the flights with more aircraft, or continue patrolling. Obviously, if you have suffered casualties in the combat phase it's a good idea to replenish your flights. 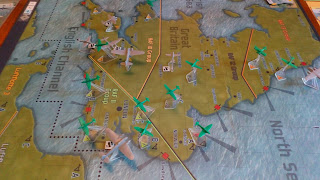 Then, if the German aircraft are over their mission targets they begin their bomb runs. Each bomber has a bombing level and this equates to the number of dice rolled to see if hits are scored on the target. Airfields and radar stations are knocked out with one hit, cities take three hits. After the bombing run has been calculated the Luftwaffe reach for home and this is dependent on how much fuel they have left, so a long time in the air means a perilous flight home!


That concludes the turn and the game cycles back to the British repair and production phase again. Each turn is long and took us about half an hour to forty minutes to complete each, but with only four turns per scenario our game took about three hours from beginning to end. In our game, I took the Germans and won with a score of 50 points to 28. 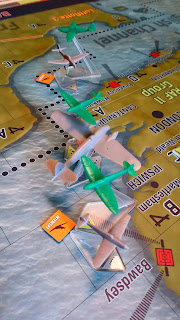 Overall, our first game was a success and it was really enjoyable and fast flowing once we had gone through one full turn.

However, I do have a couple of gripes, one is about the aircraft. It's not that they were bent when they arrived (this was easily fixed with two bowls of boiling and cold water, dip the planes in the boiling water, bend them back into place and drop them into the cold water. Mine took about ten minutes to do.), but that the Roundels and Crosses are etched on so they stand proud on the models. This may help with free hand painting, but using decals may prove a little tricky. It's a minor point really and doesn't affect game play at all.

The second issue is the lack of reference sheets. There is one for the turn sequence, which is very useful, but one for the combat rolls that are required for the dogfighting, interception and bombing would have also been useful. It's all in the rules, obviously, but they get lost within the wider paragraphs and a succinct reference would help to keep the game flowing.

Thirdly, we were a bit confused as to what happens with German bombers that go through a dogfight and survive. Are they driven off from the final attack run or do they stay with the bomb run unaffected? We played it as the latter, which put the RAF at a disadvantage instantly as, odds are, there will never be enough RAF planes to shoot down all the bombers before they reach the bomb run. This may be because the RAF are supposed to intercept the German squadrons as soon as they can to carve them up, but this has the effect of also putting the RAF planes at high risk of being destroyed as well!

I'd rather not end this review negative, the three things mentioned are minor gripes in what was a very exciting and fast flowing game that we completed within about three hours. I'm looking forward to trying it again but as the RAF.

And in other news, I have been tinkering with some of the bits and pieces for Rommel. First of all, I tried a few turns out (a quick review will come in the future) and I realised that the firing charts are slightly too small for my eyes. So, I redrew them and have saved them as PDF file which I have uploaded to my Google Docs. Click this link to download them: Firing Charts There are two fitted onto an A4 sheet so you can print them, laminate them then cut the page in half and have one for each player. 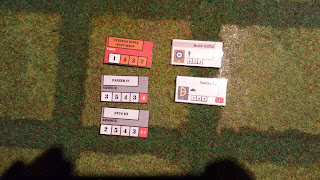 My cards on the left, Sam Mustafa's on the right

Also, I came up with my own version of the Unit Cards, again, I found the official Sam Mustafa cards too small to read, so I made them a bit more obvious. You can find mine here on my Google docs: Unit Cards. They are coloured in red and grey for the Soviets and Germans, but if you want to, change the colour schemes to suit your own needs. It's a Word doc so it is easy to change what you need. And finally, I built two forces of Germans and Soviets, of 100 and 99 points respectively. These can also be found here: Armies. I realised that I gave the Soviets one too many of each of the field guns (76mm and 122mm) in each of the Divisions, so just remove the extras. As a final extra point, I used the free font STENCIL for all the writing on the cards, so you might want to find that online and download it as my cards are formatted for using that font.

Phew! A long post! But thanks for reading to the end!
Labels: AAR Aircraft Battle of Britain board games Plastic Soldier Company Popular Post WW2