I am a bit skint at the moment, so the 100 Days Campaign project is on the back burner until I can raise the funds to buy the figures I need for the Allied Reserve Corps. However, I have a lot of left over figures from other Corps and I was able to put together the Nassau (reserve) contingent from spare Baccus French Infantry. The uniforms are reasonably similar and at 6mm, who's going to tell me that the facings are the wrong pattern? No one, that's who!


The Nassau Contingent consisted of a single brigade of 2,841 soldiers under Major-General A.H.E. von Kruse. 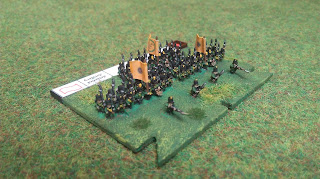 This brigade was formed of two battalions of Line infantry and one of Landwehr. The latter is the one at the back with the larger flag. The brigade was deployed on the right centre of the Allied line initially, and helped with the repulse of the French cavalry and also fought to prevent the loss of La Haye Sainte. The majority of the soldiers were inexperienced, but the officers were veterans in many cases. 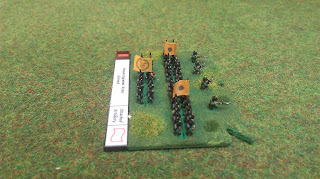 This unit is unattached, which is why the flag on the base label is blank. However, this means it will cost 2 points to move during a game, rather than 1 for Corps movement. 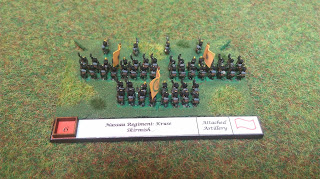 As I said, this is the first unit of the Allied Reserve Corps, but don't expect any more for a little while until I can justify spending money on lead rather than food...