Although I'd finished off the French Imperial Guard recently, when I bought the figures I'd also got myself a set of heavy 12lber cannons, to use as either a battery or attached artillery. These didn't take long at all to paint, with only about 31 figures on the base, so I just sat down and cranked them out one afternoon. 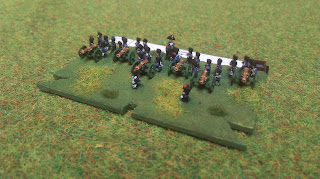 The six guns are modelled nicely and represent Napoleon's 'Beautiful Daughters', his pride and joy and the heavy battery at Waterloo whose bombardment started the battle. 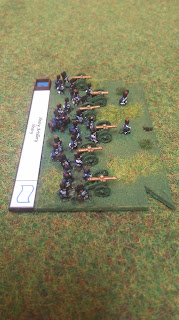 The heavy artillery in Blücher get certain bonuses for firing at long range, so are pretty good for softening up advancing infantry. 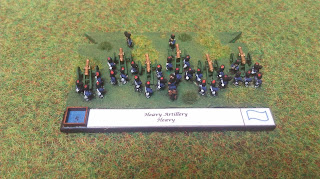 As mentioned, I also made a couple of attached artillery tokens from the spare guns and crew. This will slot on a brigade base during a game. 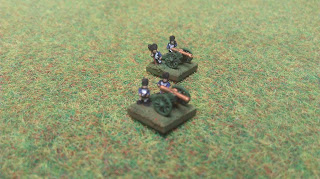 This then brings the total of 6mm figures now painted to: 3,335!

I have been busy on other projects as well, as I got Rommel by Sam Mustafa in the post recently, I decided to extend my Square Bashing board to be able to try it out. The two games are based on a 6" grid, so I repainted the underside of my second 4 foot by 3 foot board with Burnt Umber, then added flock in 6" squares to double the board size for Rommel. 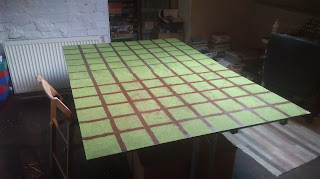 I've not had a chance to try the rules out yet, but reading them gives me confidence they will be an interesting take on the usual WW2 rule sets. Time will tell!