Over the last weekend, Dean emerged from his pit and called over to my house clutching his copy of Zombicide for an afternoon of shooting and clubbing zombies. Or at least their 28mm equivalents. I am surprised at the very few times we've actually played Zombicide, it's such a good and tense board game (and bloody difficult!).
We played a scenario that was actually deemed too difficult between editions and the winning conditions were reduced. However, being idiots, we decided to play it in it's original form. This meant the team had to find three specific items in searches AND collect six objective tokens (the red Xs in the pictures). The team began the game holed up in a tiny room in the centre of the board. I didn't take a lot of photos, but here are a few to illustrate how the game played out.

As luck would have it, all the team spent the first couple of turns searching and we found two out of the three items! Off to a good start! 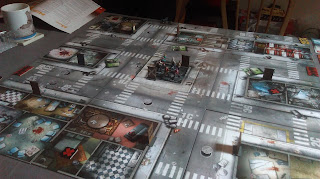 However, it wasn't too long before the dead rose to walk the earth and as the characters broke into a large building it seemed to be crawling with zombies! 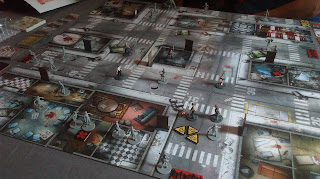 Having cleared the rooms and got hold of the objective marker, the board suddenly seemed full of zombies, all desperately trying to get into the building where we were holed up. 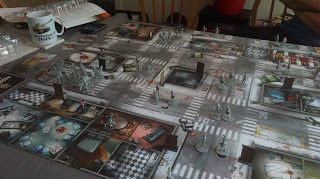 All seemed lost, until Amy found enough items to make a Molotov cocktail and clear the area outside the building. 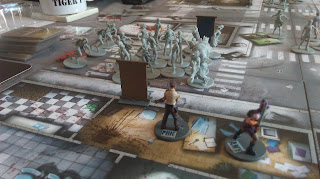 Unfortunately, the balance was weighted against us and Amy and Wanda were forced into a corner to try and take down as many zombies as possible. 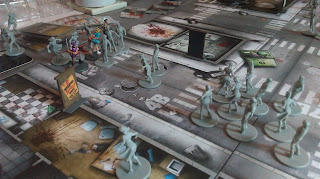 Zombicide has again proved to be an enjoyable, yet bloody difficult, game. It was well worth every penny of Dean's money. With the inevitable end in sight we finished the day off with a quick game of Seven Wonders Duel, a great two player game that is worth a few pennies of your savings.

Back at the painting table, I completed another Judge Dredd figure, this is Max Normal, Judge Dredd's narc. 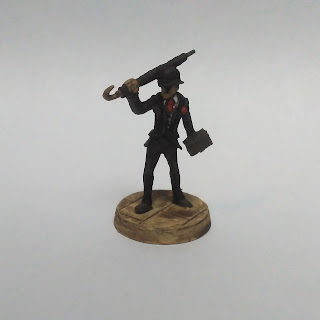 In his sharp suits he really stands out in the urban zoo that is Mega-City One. 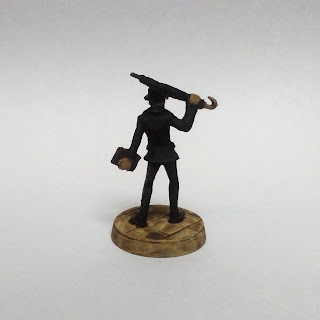 That's all for now, so thanks for reading!
Labels: 28mm AAR board games Citizens Judge Dredd Science Fiction Zombicide Zombies