Sunday 9 April 2017 was the 100th anniversary of the Battle of Arras, which featured the smaller but important Battle of Vimy Ridge, where the Canadian Corps captured the German position. This was done with help from British support troops, British artillery, British aircraft, British Commanders (Byng) and British tactical reforms developed from the Battles of the Somme in the previous year. But try telling Canadians that... Canadian Memorial at Vimy Ridge overlooking the Douai Plains,
showing the tactical and strategic importance of the position

Ninjasaurus and I decided to play a game of Square Bashing on Sunday, based loosely on the Battle of Arras, in that I used 1917 army lists to draw up the forces. The British consisted of:
Facing them were the Germans consisting of:
We rolled a dice to decide on who would take which side and I got the British, Ninjasaurus got the Germans. Then we went through the pre-game steps to decide who was the attacker and defender. The British were attacking (which was lucky for me, as tanks are useless in the defence...) and during the pre-game steps I was also able to increase the quality of the two Reservist battalions to Regular and ramp up my artillery support. The next step was for Ninjasaurus as the defender to set up the board, I then had a chance to move some of the scenery around, which I did. Finally, we set up the attacking forces: 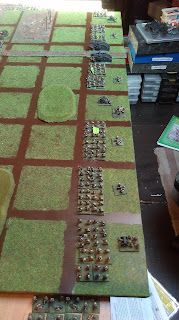 The Germans then set up their defence and we rolled for depletions, which reduced his forces slightly. He chose to move some of his depleted battalions to his reserve off board and we were set: 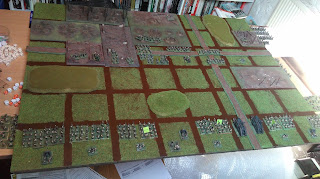 The opening move saw me bring down a point effect barrage on his front line, pinning the Professional Battalions in place as they were threatening the hill objective which I'd just captured (Vimy Ridge). 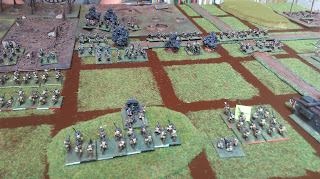 There was also a general advance against the ruined building objectives on my left flank. 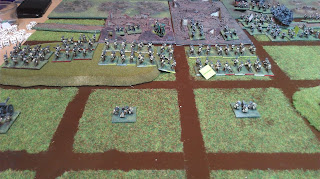 Then on his turn, the Germans ordered a rolling barrage which blattered my attacking left flank, causing a few casualties here and there. 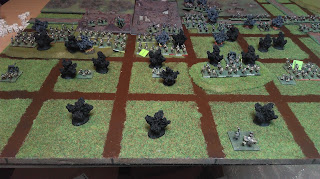 On my right flank the Battalions that had advanced into the broken ground were pushed back by a localised counter-attack, taking heavy casualties in the process! 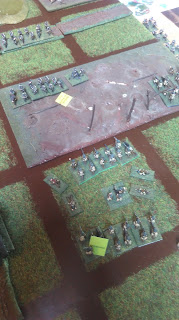 In turn two, I called in more artillery support, this time a rolling barrage. I rolled for the accuracy and it fell short and landed on my attacking soldiers! However, it did also roll onto the German positions, causing some damage at least. 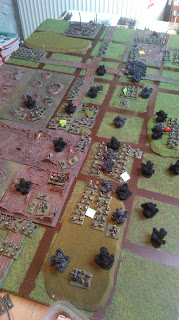 With the barrage falling around them the British attackers stormed into the ruined building objective overrunning the MG and field gun in there. I was now in possession of two of the four objectives. 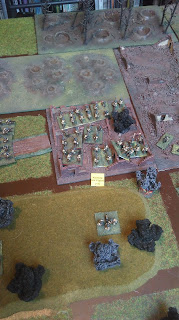 Girding their loins on the right the three attacking battalions rushed the woods with the tanks in support and threw the Germans back to their start lines! 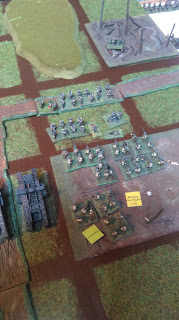 Beware the Hun in the Sun! Suddenly a German ground attack aeroplane swooped down above the battlefield looking for juicy targets. 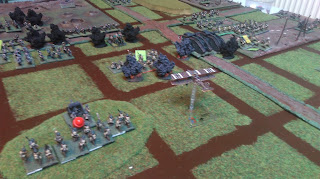 With the barrage markers lifted the battlefield was looking much clearer, the British infantry had possession of most of the left flank buildings and the right flank woods. In the centre my tanks were threatening the crossroads objective and the Germans were being squeezed into a tighter position. 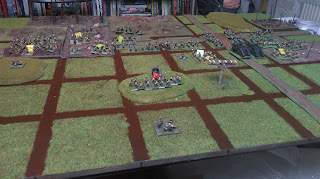 German reinforcements arrived on the road, but the British pressure on the centre saw the Germans falling back in that sector as well. 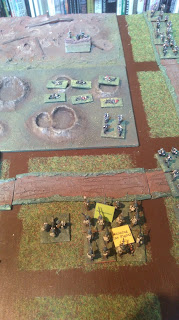 After some hard fighting, the German defenders were largely cleared out of the ruined buildings and the centre, but they still held on to the crossroads and with a reasonably large number of defenders as well. The tanks attacked the crossroads, but lost the fight and both tanks ended up damaged for their efforts! 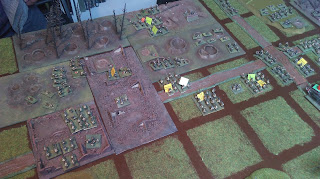 The German ground attack aircraft flew off again, but not before causing casualties on the units holding the hill objective. 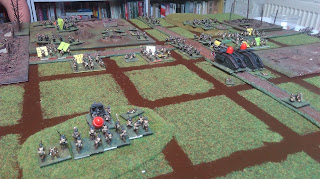 Then another calamity! The tanks were overrun by the German crossroad defenders, both were completely destroyed in the attack and my centre was open for exploitation! 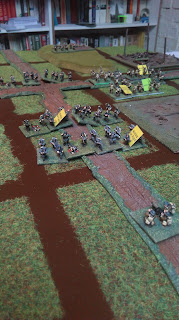 The crisis was averted by pushing in more infantry to plug the gap. The Germans were pushed off the crossroads and took massive casualties (10 in total!) as they fell back. 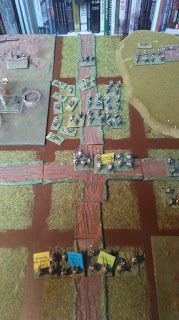 On the left flak, despite being held up in the ruined buildings and damaged ground, the British infantry were able to attack and push the professional German battalions back to their back line. I also called in air support to try and break up the defence further. 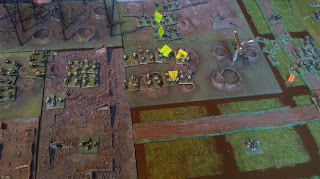 Despite German aircraft also patrolling over the battlefield the defenders were being forced into an ever smaller and smaller spot, the wood objective on the right was also in British hands by this stage. All the objectives were in my hands, but we still had loads of time left on the countdown timer, so we continued playing. 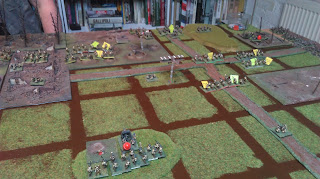 The Germans pulled back together on the road to consolidate their forces, what remained of them... 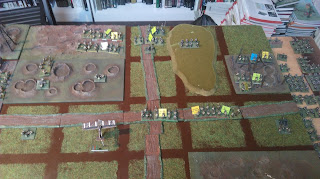 And then brought in a point effect barrage on the British on the crossroads. It fell perfectly and did heavy damage to the battered battalion defending the objective. 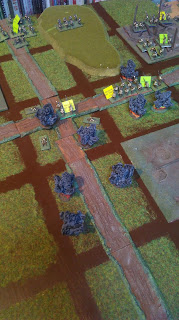 The German attack on the crossroads was stopped short by the barrage, as they were unable to move into it and I took the chance to close off their rear on the road. 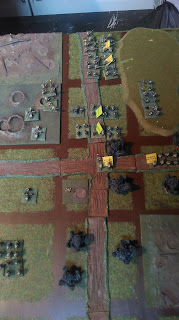 The barrage lifted and the professional Germans attacked and captured the crossroads again! 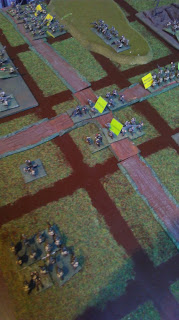 And despite attacking them from three sides I was unable to crush them! 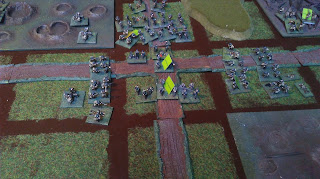 Then in a crazy move, the Germans advanced down the road! This was not so crazy as it was threatening the hill objective, now only defended by two field guns and an easy target for infantry! 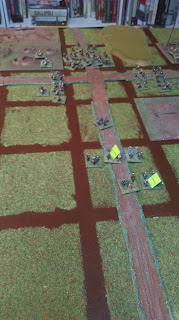 But their headlong advance was checked with another point effect barrage which finally finished them off. 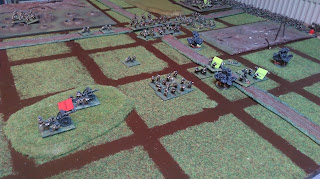 I retook the crossroads, the fourth and final objective. We didn't count up the victory points as it was a pretty obvious Allied victory. Here is the board on the final turn: 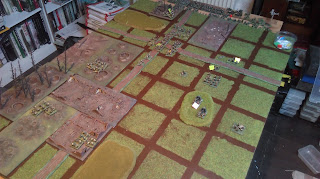 In the end it was a walk-over for the British, I barely lost a full battalion, whereas the Germans were destroyed almost to a man. It was largely down to the dice rolling on the Germans side, there were a lot of poor rolls on his part.

From a tactical point of view the German defence was sound; the MGs were in good positions; but Square Bashing does favour a big and bold attacker. This I used to my advantage and weighted the attacks in my favour. A thinly spread attack line achieves nothing and you have to gather together and pile on the pressure. A sledgehammer to crack a nut, basically.

Square Bashing always provides a fun and exciting game and this was no different, you could even say that the British gave the Germans a good kick up the Arras!