In our continuing Operation Compass campaign, hosted by Dean the third engagement was the Battle of Tummar West, when the 7th Royal Tank Regiment attacked the Italian defenders in a fort. The attack commenced after an hour long artillery bombardment and the defenders capitulated in just over two hours of fighting.

This battlefield was a bit busier than the previous battles, with a village lying in the path of the British (along with four refuelling Italian tanks) and two minefields. The fort was also protected by barbed wire and dug in Italian anti-tank guns.

I took the British and had an ad hoc force of tanks, armoured cars, 2lber portees and some infantry. The Italians consisted of native troops in the fort, a scattering of AFVs and some Blackshirt infantry. I had to capture at least three points worth of the objectives to win, the fort was worth two points alone, along with two other objectives. Ninjasaurus took his Italian defenders again and Dean umpired the game for us.

We were trying out a new way of reducing the IGOUGO system that Rapid Fire! uses. This was done by distributing playing cards to each individual unit. The cards were then revealed and the units took turns depending on the value of the card. So, an Ace card moved before a King, a King before a Queen, etc. If there was a tie on the values, the British always moved first as they were attacking and had the initiative. In the original rules, you move your entire force, before your opponent does the same and this always felt clunky and unrealistic. The card system does away with this and makes you contemplate your moves more. 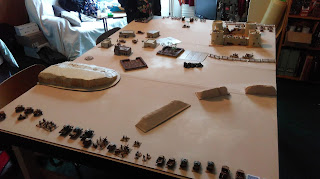 The British opened the engagement with an artillery barrage from two 25lbers which destroyed an Italian anti-tank gun and damaged the other one. As we revealed the cards, the British began advancing, unfortunately my tanks were to make slow progress in the centre. My plan was to try and knock out the refuelling Italian tanks in the village, whilst using the Vickers light tanks to run over the barbed wire defences in front of the fort to allow my following infantry to attack. 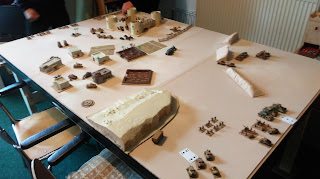 Using the speed of the scout cars I was able to get in close on the Italian M11/40s and brewed two up in quick succession. 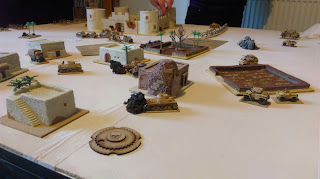 However, on my right flank I had knocked out the Italian artillery, but one of my Portees was knocked out by fire from the fort along with a transport truck and the infantry passengers. 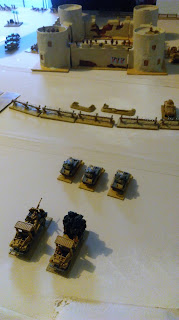 As another Portee bit the dust, without firing a single shot, I was able to crush the barbed wire. However, my following infantry had almost been destroyed by the Italian defenders! 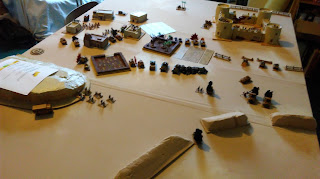 Things were heating up on the left as the Blackshirts arrived to defend the village and the M11/40s were refuelled and exchanging shots with my scout cars and tanks. 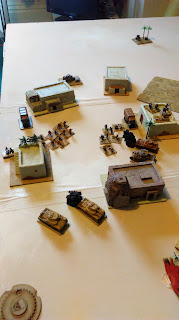 As more Italian light tanks arrived things were looking sketchy for me and I actually considered throwing in the towel at this point. 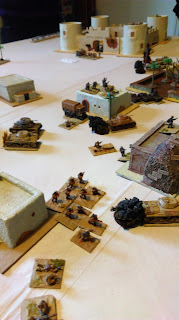 Fortune favours the brave though and my Vickers light tanks pushed themselves forward as more Italian tanks brewed up under fire from the 7th RTR. 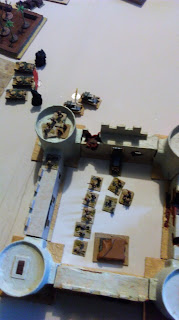 The Vickers tanks burst into the fort against defenders with no anti-tank capabilities. 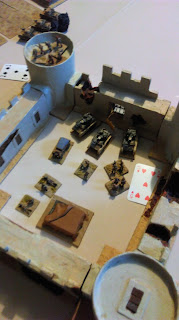 A few good dice rolls saw the defenders quickly dispatched as the fort fell to the British! 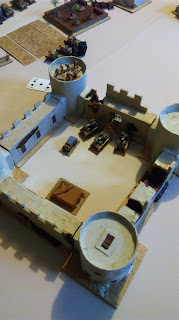 On the left flank the artillery were giving the Blackshirts a hard time, although I lost a British A-10 to anti-tank fire. 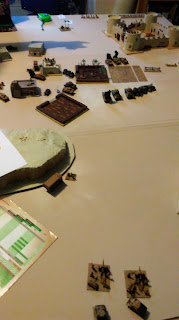 This was when the Italians threw in their towel! It was game over, they had lost all their anti-tank capabilities and we thought it would just be a case of the British mopping up from this point on. 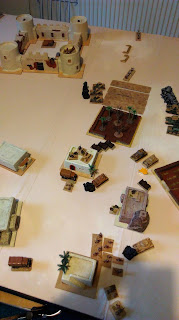 The game had lasted three full turns, almost as long as the real battle! another British victory, just like the actual Operation Compass, but this one had cost me dearly. Most of the British infantry had been wiped out and vehicle losses were high, including two Portees which added nothing to the attack!

The use of the cards as unit activation worked really well and it something we will be using for all RF games in the future. It can be tweaked to give favours to one side or another, or just used as it is, either way, it's a good system and one player isn't waiting ages to take their turn, which was the reason for using them.