A Little Farm Of My Own

Although I'd completed the Icelandic Viking Age Turf House I decided not to rest on my laurels and expanded the farmstead. Two more structures would suffice for now, a piggery/outhouse and a cattle/sheep enclosure.
Both of these were simply made from plasticard and mounted on vinyl tiles about 8cm square (give or take a centimetre...). The outhouse was basically a box shape with a doorway and the enclosure was is five strips of plasticard mounted in a square. I made the gate of the enclosure by gluing together two bits of embossed and thin plasticard for the planking and four strips of thin plasticard for the horizontal elements. 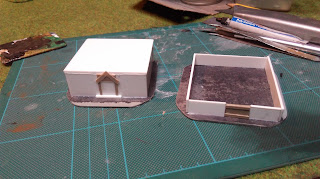 The next stage was to add the DAS modelling clay, this was simply pressed out flat into strips for the enclosure and folded over the plasticard. Similarly I draped it over the little box shaped outhouse, but also added a lump on top to create the hog's back style roof. Finally, I painted some PVA and sand over the bits of the vinyl tile that was still exposed to give it some texture and to make it look as though the cattle had poached the ground. 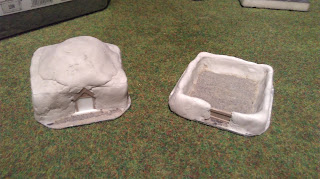 Then they were left to dry, I painted them all over with German Camo Dark Brown, the wood was painted with Khaki Stone and inkwashed and the sanded areas drybrushed with Khaki. Then I painted them with a thinned down PVA mix and flocked them: 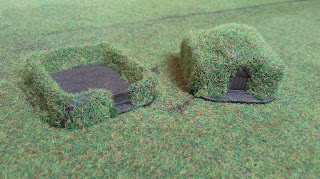 So now the farm has grown, but I haven't finished just yet. The next step is to make a small courtyard between the buildings, but this will have to wait as I work away these days. 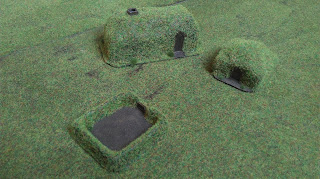 So far, so good, but I also need to populate the farm with livestock, but I have ordered several packs of pigs, sheep, cows, dogs and assorted animals, so stay tuned for them!