Unfortunately, I missed my self imposed deadline of completing II Corps by New Years Day. Instead, I put the finishing touches to Général de Division Comte Piré's 2nd Cavalry Division on the 2nd of January. Well, a day late isn't bad, really. 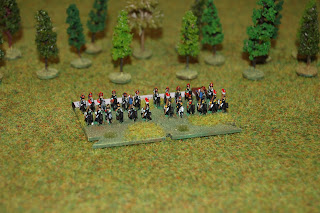 The 2nd Cavalry Division fought at Quatre-Bras where it supported Bachelu's attack and routed two Dutch cavalry regiments. It was also involved in attacks on the British squares. 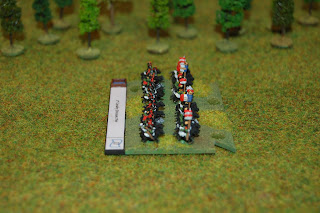 On the 18th of June at Waterloo, the Division was posted on the extreme left flank of the French army to cover and support the attacks on Hougoumont. It was the second strongest cavalry divisions at Waterloo with over 2000 men after the Guard Light Cavalry Division. 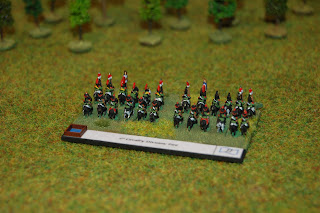 The 2nd Division brings to a close the II Corps, the Christmas break proved to be fruitful for getting the corps off the painting table!

Next up in 6mm is the British II Corps (which marched through my letterbox this morning). So keep checking back for updates on progress with that unit...