The other Zvezda kits I picked up at the Derby World Wargames was three SU-152s. I wasn't aware that Zvezda had produced these, so it was a nice surprise to see them. They were easy to build as well, having only a few parts each. 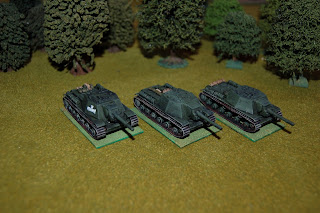 They are nice chunky models with lots of details that are sharp. I put stowage on the rear plates to round out the builds. The stowage came from various sources. 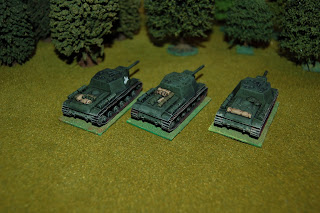 As with all my Russian tanks I painted them in my usual minimum way, most Soviet vehicles didn't have recognition markings, so neither do mine. One has been marked with a patriotic slogan to mark it out as the commander's vehicle. 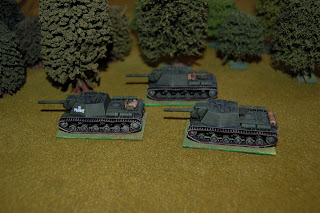 As another addition to my 15mm Late War Soviets, these 152s will be very useful for knocking on Hitler's door in Berlin...