I Predict A Riot!

Another week has passed without me getting any painting done. However, this weekend, I was able to finish off the final two Judges from the box set I bought for my birthday; the two Riot Judges. I was surprised to only have two of these models in the box and would have thought a better idea would be to have a box full of them! You'd hardly get two on their own during a riot...

Anyway, one of these is armed with a daystick and the other with riot foam. 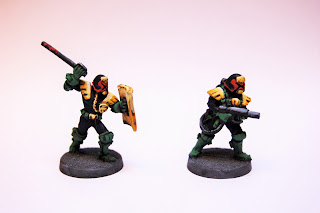 Like, I say, it have been nice to have a few more poses of Riot Judges, that would make for a really interesting scenario... I'm sure these will be put to good use though! 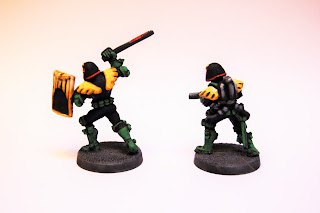 Now, I need to save up for a box of opponents, maybe some fatties or Juves. But that's for the future.

In other news, I bought a copy of Lion Rampant, the Osprey Medieval wargames rules. Dean has been muttering about it for ages and I have been eyeing up Peter Pig's Viking figures for years now. The rules look good at first glance, not too complex and with an army of about forty figures, easily put together and for a low cost. Keep checking back for updates as I start ANOTHER NEW project...
Labels: 2000AD 28mm Comics Judge Dredd Justice Department Science Fiction