On Sunday, Ninjasaurus Rex called over for a game of Judge Dredd, or so he thought. I told him that's what we would be playing, however, given that the 15th of September was the 100th anniversary of the Battle of Flers-Courcelette and the first use of tanks in warfare, this was a perfect opportunity to try out the tank rules for The Great War Board Game

, something we had not done yet. Obviously the scenario we were playing was the Battle of Flers-Courcelette, one of the scenarios in the rule book. This game was carried out 100 years and three days after the actual battle.

I took the attacking British, the infantry were helped by three Mark Is; two Female, one Male and he took the defending Germans, some of whom were based in concrete bunkers. This was going to be one hard nut to crack. 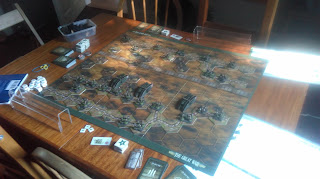 After rolling for the no-man's-land cratering my tanks set off with some infantry support behind them. So far, so good, none bogged down as they plodded their way to the German lines. 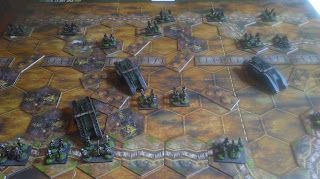 The middle Male tank waddled over the barbed wire and attacked a group of Germans cowering in some shell craters. The defence was soon smashed and the tank rumbled on to over run their position. 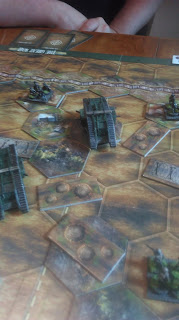 On the right flank a group of German bombers were similarly dealt with and the tank straddled the German front line. They seemed to be invincible at this point! 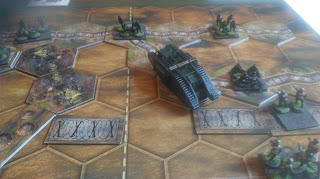 Meanwhile in the centre, getting the Germans out of the block houses was proving difficult as artillery fell around the two tanks, both now bogged down and vulnerable to attack! 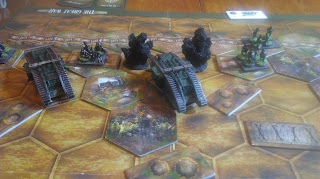 All three tanks had bogged down at this stage and my infantry had barely left their trenches. The command cards I was pulling were not good enough to get a general advance going, so everything seemed to be stuck! 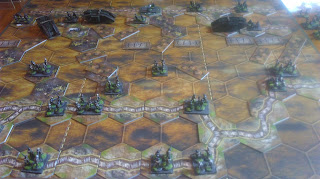 I was able to unbog one tank on the right flank and with the help from some of the infantry that I had managed to push forward the advance continued! 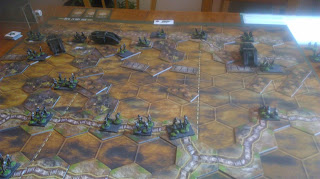 Keeping up the pressure on the right the German defenders faced a combined force of tanks and bombers! 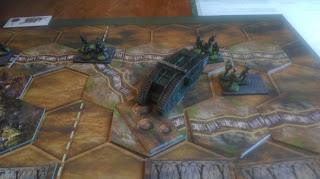 Then on the left flank the other two tanks freed themselves from the mud and poured fire into the bunkers, with the destruction of a machine gun and infantry unit I had the six victory points I needed to win! 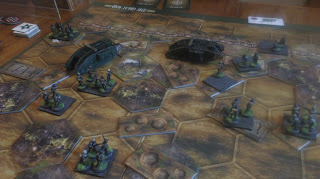 This is how it looked on the final turn of the game. This had been a particularity tough fight despite the tank's great start. My infantry had hardly moved and those that did were battered by the German defence. 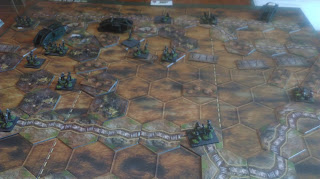 Had the game gone on for one more turn, then victory would have been handed to the Germans. They were on five points at this stage and just needed to destroy another British unit to win and they were facing a couple of badly damaged units. Fortunately for me, they were not allowed this opportunity!

The tank rules were slightly complex and took a bit of reading to work out properly, the one thing missing from The Great War is a good play sheet and we were looking through the rule book a bit too much. Maybe it was the first game using tanks, we'll see when we use them again! They seemed pretty tough to kill, having to score a hit on them and then effectively having to roll a six to cause one point of damage from a total of two. Once this was realised, Ninjasaurus stayed well away from attacking the tanks and concentrated his fire on my soldiers instead. However, they didn't seem to over balance the game too much as it was a close result.

And a bit of advertising for me, I am still selling some British WW1 20mm figures on ebay. Take a look HERE. Have a look through my other items as I have few wargaming items and board games on there, like these copies of Miniature Wargames.