As previously mentioned, I thought I'd do a post on how I painted my models from The Great War Tank! expansion. In this case, these are the three Whippet tanks which I got for my original Kickstarter backer £10 bonus. The principles I have employed on these three tanks are exactly the same as all the other vehicles that came with my package and are very simple to follow.

First off, here is how the models actually arrive. There is a basic paint job on them, the markings on the tracks and a garish red exhaust. But other than that they are pretty plain, some may like them like that, but they are too plain for me! The first thing to do was give the models an inkwash with some slightly watered down Vallejo Black Ink. I don't remember the exact ratio, but it was probably three lots of ink to one of water. I'm not very precise about these things... This was liberally applied to the entire bodywork of the tanks and left to dry for a few hours. 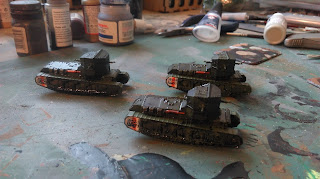 Once the ink had dried, I painted the tracks in Matt Black, I used Coat D'Arms, but any paint will do. This doesn't have to be incredibly neat as any mistakes can easily be covered up with the weathering later in the process. 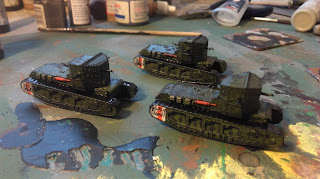 Then, once the black has dried, using Vallejo's Hull Red and a size 3 brush, I go over the tracks. Again, this does not have to be neat and even having patches of black showing through can be a bonus. You'll notice that I didn't bother painting the exhausts on these and left them in their original colour, but with an inkwash. 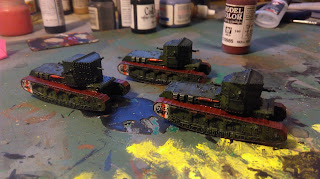 The next stage is to paint Games Workshop's Bolt Gun Metal thinly but roughly over the top of the tracks and the exhausts. Again, neatness is not necessary and having the lower colours coming through the metal is a good thing and gives the tracks some depth. 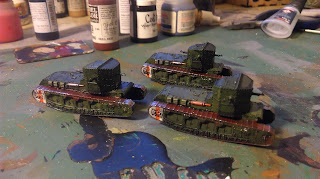 The penultimate stage is to inkwash the tracks and exhausts again in Black Ink, mixed with a little water. I usually leave the Boltgun Metal to dry for a bit longer than the other paints as I find that the inkwash reactivates the paint and it spreads it about a bit. 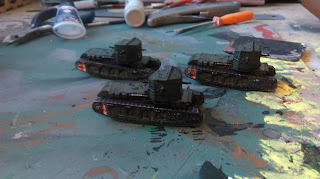 The final stage before spray varnishing is to get a flat soft brush and apply some drybrushed Vallejo Khaki around the tracks and hull undersides to represent the dust and mud that would congeal there. I did try adding sand mixed with PVA to represent this on one of the Mark IVs, but I thought the effect was a little too clichéd, that everything in the First World War was covered in mud... The good thing about applying the Khaki is that is covers any transgressions you may have had in the earlier stages... 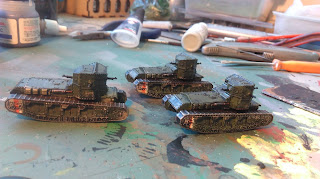 So there you have it, some painted models in reasonably easy steps and with minimal work time. 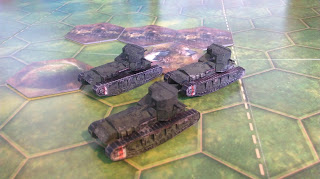 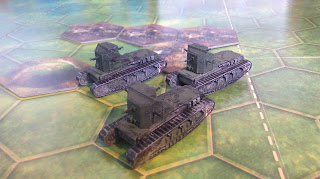