In a break from 15mm and 6mm figures I decided to start work on a Fokker DVII kit that my girlfriend had bought me for Christmas. It was a cheap one from a Czech company I had never heard of before called Směr. I wanted to make another First World War biplane, but wasn't bothered about sorting out rigging again, so the DVII is perfect as it has very little.

Looking at the kit initially, I saw it was pretty basic, there were only a few parts and should be an easy build. However, this didn't sit right and the cockpit looked too bare for my likings... So I decided to build a rod for my own back in the shape of the steel frame that the pilot was surrounded by. Also, as the aircraft was mainly fabric, I thought it pertinent to show the lozenge pattern that the plane would have originally been produced in. First step was the cut off all the little lugs that held the seat and other things in place, then paint the interior in white. 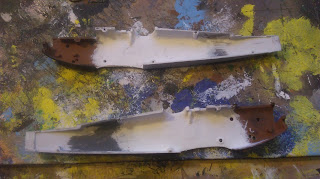 The white paint was used as a pimer for the interior decals. I bought a set of Fokker DVII lozenge pattern decals from Aviattic. They were a little expensive, but definitely worth the money. I added the interior lozenge decals on the fuselage and a liberal dose of Micro Sol to soften the decal and help it form properly. 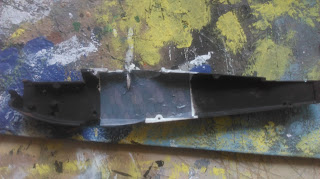 Once this had been left to dry for over 24hrs, I then took a sharp scalpel and cut off the excess decal material and painted black up to the decal edges. 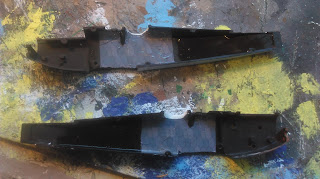 Next stage was to create the frame for the cockpit. Now, I decided not to make the entire frame, but just enough that would be seen if someone were to look into the model. I used some thin round plasticard rods and followed the amazing instruction booklets that come with the WingNut Wings Fokker kits (I'd love to make one of these one day, but I fear I'd ruin it...). I carefully glued the frame in place and left it to dry. I also cut a small rectangle of plasticard for the cockpit floor and painted the dashboard, seat and floor in brown. 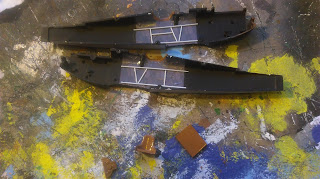 Once the frame was dry, I painted it in Gun Metal and fixed the engine in place along with the other parts of the cockpit. Dryfitting the two fuselage halves, I found, to my amazement, that it all fitted together! 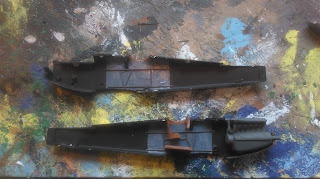 That was enough for now, this is a slow build as I have been quite busy recently, but there is more to come, so watch this space!