Duel in the Dunes AAR

On Sunday Ninjasaurus Rex and I gathered at Dean's place for our second game in the desert campaign that Dean has started running. This was a fictional encounter between an Italian defence force facing against a British recce unit. Both sides were expecting reinforcements which would enter the game at a random point and randomly along the start lines.

The Italian defenders were dug-in and consisted of two companies of colonial troops, a couple of heavy machine guns, two mortars, higher command and two field guns. The British attackers had two sections of engineers and higher command in Universal Carriers, three Vickers MK IV light tanks, three Humber Mark Is, two companies of infantry in trucks, supported by mortars, a 6lber Portee truck, a towed AA gun and two towed 25lbers. A quite light force, all in all. The reinforcements for both sides consisted of various tanks.

A wadi ran the length of the table, which gave protection from fire and spotting, but could only be entered in two places. The Italians held the top of the table helped by two mine fields and belts of barbed wire. I took the British and this was the initial set up. 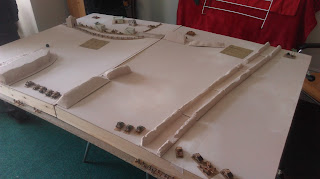 With the threat of reinforcement coming at any time, I felt it better to hit the Italians hard and pushed forward into them. 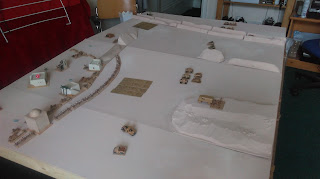 However, his initial round of reactive fire took out a Universal Carrier, a Humber scout car and heavily damaged another Humber. 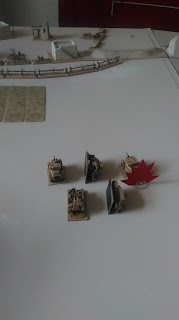 Not only that, but he destroyed the AA gun and truck along with the truck for the portee gun! I was complacent about the Italians from the previous game and things were not looking good! 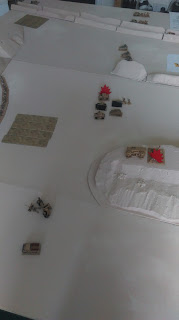 Mind you, once my forces began firing things shifted, I silenced a machine gun and one of the field guns. 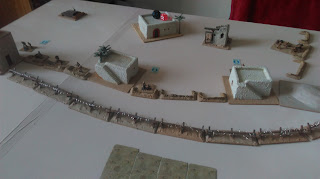 Nosing forward, I directed the two remaining Humbers around the mine field and got the Vickers tanks close to the sand dunes where more Colonial troops were hiding. 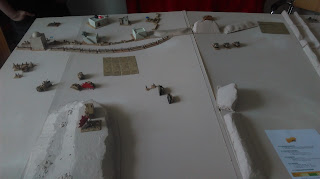 Italian fire was not as successful this time as my infantry de-bussed and exchanged shots with them behind their defences. 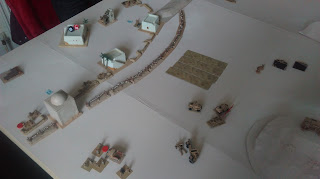 The engineers began clearing the large minefield in front of the Italian wire and the 25lbers set up behind the safety of the wadi in order to commence firing on the Italian positions. 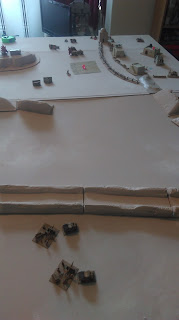 There was hard fighting in the centre with the Italians losing out to my armoured cars and infantry. 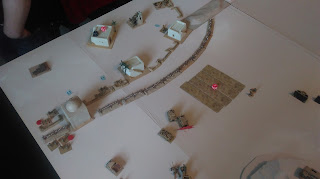 On the right flank the three Vickers crested the sand dunes and started firing at the colonial troops behind them. 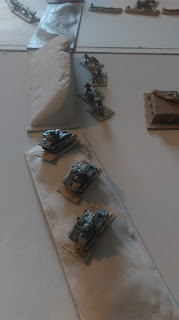 The British higher command in the Universal Carrier directed the 25lbers to fire on the Italian positions, but with very desultory results. 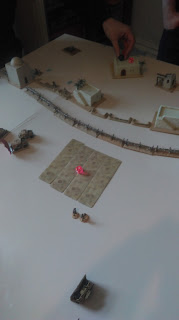 It was the rifles of the infantry and machine guns of the vehicles that were causing the most damage. 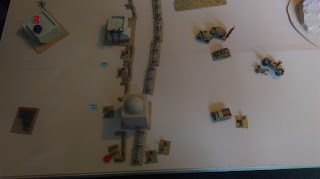 The minefield was cleared and on the right flank the Vickers tanks had forced the colonial troops back to the defences, British infantry on the left swarmed over the barbed wire and the Italians were very much on the back foot at this stage. 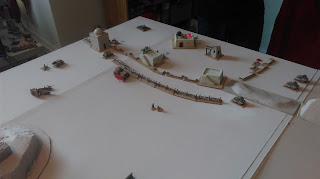 It was looking decidedly empty on the Italian side of the lines as the British tracked vehicles chewed up the barbed wire. Still no sign of reinforcements from either side though! 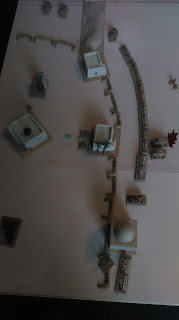 Then suddenly swooping out of the sun an Italian CR.42 Falco strafed the British higher command in the Universal Carrier. They were easy pickings with no AA fire from my side. 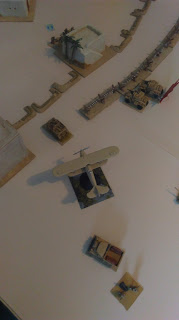 The aircraft killed the passengers and the loss of my commander as a spotter effectively put my 25lbers out of action. 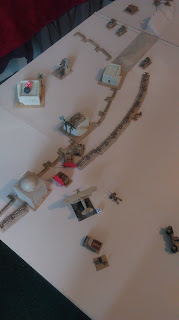 Despite taking heavy losses, my morale stayed intact and the Humbers and Vickers were able to destroy the remaining Italian defenders. We decided that the reinforcements would have been shot to pieces as they arrived so finished the game there with another British victory. 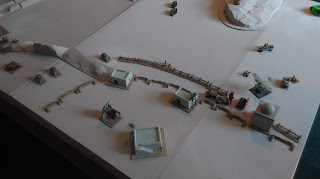 It was another exciting and action packed fight in the desert. The Italian defence looked pretty sharp initially, but was soon knocked about by the armoured vehicles. The high losses on my part were due to a reconnaissance unit being forced to attack rather than heading back to the main unit to report! It certainly looked touch-and-go when the Italian fire started wrecking my attack...

We finished the day off with two games of Memoir '44, which Dean had got for Christmas but had not yet played. I won both of those as well...