As my 6mm Blücher project has progressed I have been wondering what do with artillery. In the rules, artillery is used either as a battery or a single gun attached to brigades. Making up a battery is a pretty simple procedure as they are mounted on the same sized bases as the rest of the forces. I haven't made one yet, but it is on the list. More tricky is showing attached artillery. I put together a small base of a British 6lber, just to see how it would look. Mounted on a small Flames of War base it looked quite nice. 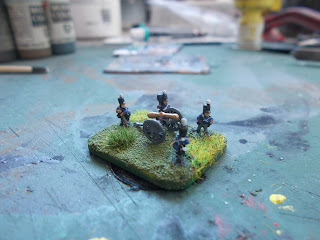 That then gave me an idea of how to represent the attached artillery for brigades. My original idea was to have the player circle the space on the base label with a dry wipe pen to signify an attached piece. However, using the guns would look much better in a game. The guns are just big enough to fit on a 15mm x 15mm base with two crew. 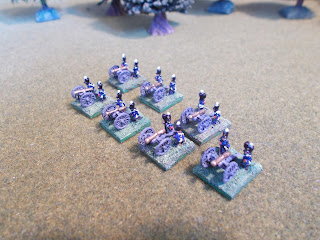 This sized base sits perfectly well on the space of the label and to my mind looks a damn sight better than my original idea. 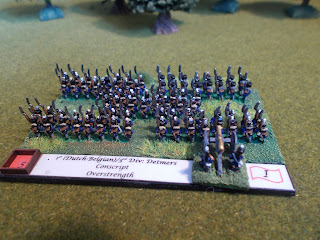 The gun is small enough to be dropped almost anywhere on the base, so I am pretty pleased with how these turned out! 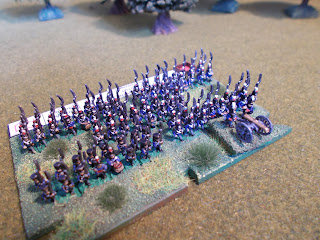 I only have seven completed for the British at this stage and I need more for the French. If I make up enough of these for every brigade I have, then I will have enough for any game!