Back at Vapnartak one of my purchases was some of Baccus' 6mm buildings from their Napoleonic range. I bought the village set, which included four buildings at a cheaper price than if they were bought separately, so they are a good bargain. In recent days I have been able to paint three of them. The reason the fourth building is still unpainted is because, in Blücher built up areas are designated by a square that is slightly bigger than a base width by a base width in size and I haven't got enough buildings to cover the base at the moment, so it can wait until I buy more. In my case, my brigade base widths are 3.5 inch, so these building bases are just slightly bigger than that so that units can be accommodated easily. 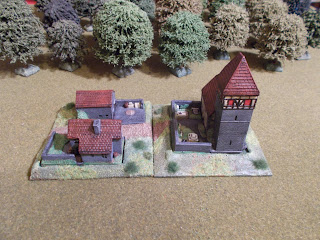 The village set consists of a barn, a small cottage and a church with a graveyard (plus the bigger as yet unpainted Manor House). They all come on their own base, so I used these to hold the buildings in place on the base but to also make them removable. 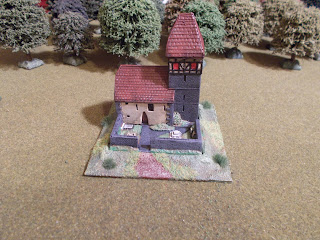 With the base on the base and some Polyfilla applied, the church appears to sit on a small hill, which I quite like. 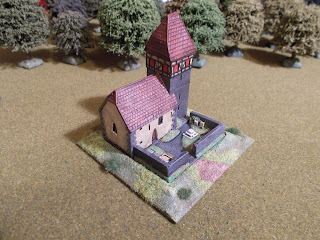 The barn and the cottage also come on their own bases, again, they were used to form the base of the built up area. 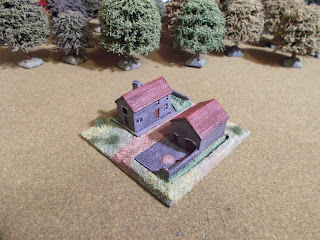 The buildings can be removed, which is a bonus as it means I can use them in games other than Blücher. I lined up the road running through the village with the one from the church so it looks like the main street of the built up area. I'll do the same with other bases that I make in the future. 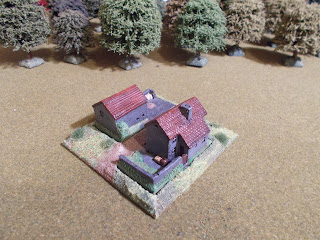 However, my priority is Blücher at the moment, and these two base put side by side make a town in the rules or two villages. One base is a village, two a town and three a city. This last photo shows the church and graveyard removed and one of my British bases occupying the position. 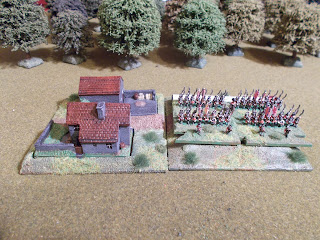 As I mentioned, there is another building to finish from this set, but I am waiting for other 6mm buildings before I start it. I will make some other bases to add more built-up-areas to our board, so stay tuned for those when I start them!