Villains of the Galaxy

Every hero needs a villain to battle and Star Wars Miniatures Battles is no different. Along with the heroes of the Rebellion, I also added the villains of the Empire to my 15mm Star Wars project. Namely Darth Vader and Boba Fett. 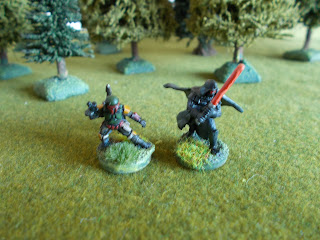 Both figures came from Highlander Studios, the Darth Vader figure is from their 'Kendo Masters' range along with Luke Skywalker and Obi-Wan Kenobi. He was pretty simple to paint, just a basic black base coat which was then drybrushed with black mixed with Khaki, to give a more 'organic' feel to his clothing. The lightsaber was painted red and I gave his eyes a red colour as well, just to make them stand out. 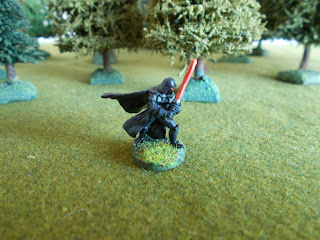 Boba Fett came with Han Solo and Chewbacca in the 'Space Pals' set from Highlander Studios. The bounty hunter was a bit  more involved when it came to painting. I found a great reference page on the 501st Stormtrooper Legion website and used that as a guide. He was then inkwashed with brown wash to give him a bit of depth. 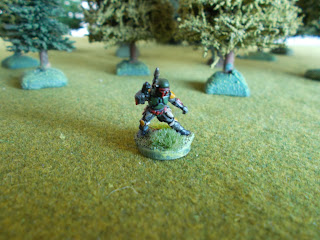 These two will add more flavour to the game and will have their own stats as per the Heroes of the Rebellion. I also bought a bunch of Minions from Highlander Studios but you'll have to wait a while to see how they turn out! Thanks for reading!
Labels: 15mm Bounty Hunter Imperial Science Fiction Star Wars