In our first game of The Great War, I noticed that the plastic figures that come with the game are a bit flimsy, so we used my Peter Pig figures instead. This is because they are not based together in groups, but singly. I had a think about solutions to this, I didn't want to base the figures in groups of four permanently, I wanted to be able to remove figures during a game to retain the board game aesthetic, however, I also wanted to be able to use the figures in other games such as Square Bashing.

I asked around on TMP and settled on the solution of making bases with metallic paper and mounting the figures on small magnets. So, as a tester I bought an A4 sheet of metallic paper, which I found on EBay. Not only was it metallic, but it was also self-adhesive! I then took a bunch of Peter Pig bases that measured 30mm by 30mm and 30mm by 40mm (for the mortars) and stuck them down to the paper, one at a time. This gave me the exact template to cut around: 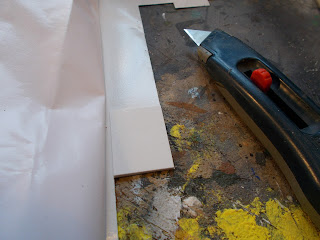 This was dead easy to do and in no time I had plenty of bases with the metallic paper already attached. 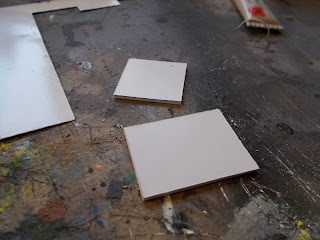 The next phase involved the magnets. I measured the bases of The Great War figures and found that they were about 12mm in diameter. It took a while, but I managed to track down some 12mm diameter magnets, which were also self-adhesive! Handily enough, the magnets are in a dark brown colour, which matches neatly with the colour I used on the base of the figures! Double win! 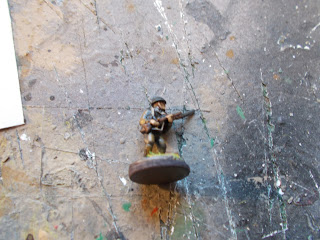 I tested out four figures with the metallic paper and base and found that they sit nicely on the 30mm x 30mm square. 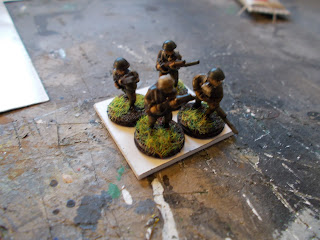 The magnets were even strong enough to hold the base upside down without the figures falling off! 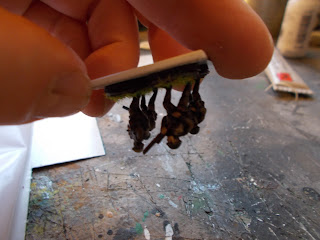 I knew that the magnets and paper worked without paint on, the next step was to test the base fully painted. I also added PVA glue and silver sand to give the base texture. I used the silver sand as it is finer than the usual sand I use for basing and I thought it would interfere less with the magnetic properties. 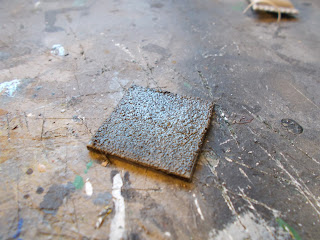 It worked like a dream. The figures still stuck down well to the base, there was little slippage and they still held on upside down! 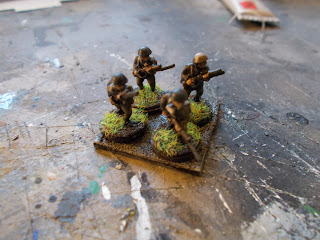 They compare pretty well to the Peter Pig Square Bashing bases that I already have, you can see one on the right here, with The Great War base on the left. This means that I will be able to use the bases should I need to increase my Square Bashing collection. 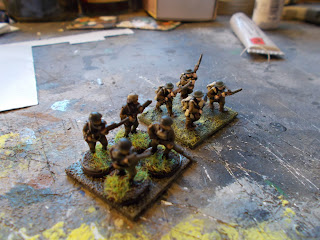 With the success of the magnets and paper, I made enough bases to house all the figures of The Great War and as they dried they looked like freshly baked brownies... 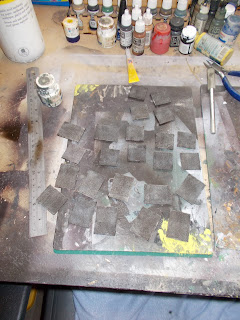 As I said, I made two sizes of base, a 30mm by 30mm size for infantry, but also the 30mm by 40mm base which will house the specialist weapons, such as this bomber and his unit: 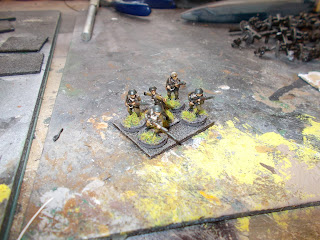 Also the mortar and crew fit well on the 40mm by 30mm base. 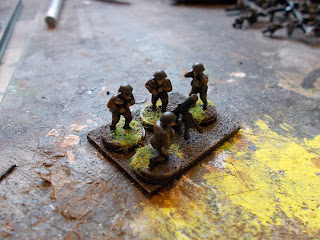 The Vickers MG and crew sit happily on the smaller base: 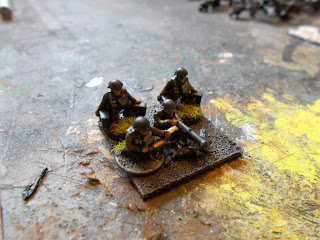 It didn't take very long to produce enough bases to house all the figures that come with the basic game and in cost only a little more that £10 including the magnets to pimp out the game. I'm looking forward to using these bases in a game and see how they handle being moved about and having figures knocked off during the course of the game. I think they will be pretty handy!