They Mostly Come at Night... Mostly...

Who remembers Space Hulk? I'm not talking about the new 'limited edition' version that gives Games Workshop license to print money, but the original box set from 1989. Although the rules were pretty simple, the first edition has a really intense edge to the game play, especially when playing as the Terminators. The few against many with a generally inevitable end. It was ruined when GW decided they could sell more figures by turning it into Warhammer 40,000 in Space and cramming in as many races in as they could.

Anyhoo, Ninjasuarus Rex has been busy buying up second hand Genestealers and even a second box set to augment his original box. He has been working on an idea to retro-fit the Space Hulk game back to its original inspiration, the 1986 film Aliens. This essentially means getting rid of the lumps of plastic that stand in for the Terminators and replacing them with a bunch of human figures that are based on the film. The figures came from Denizen Miniatures in their 25mm Sci-Fi range and are lovely minis; they are really well proportioned and the women look like women, not gravity defying buxom wenches, which is usually the case.

He also undercoated a good number of Genestealers and the Marines, so we were able to play a game last Sunday (waiting for him to actually finish some figures would be like waiting for Godot, so undercoated figures are a damn site better than nothing...). He also scratch built the bases for the figures to look like the metal floors of the spaceship, bloody lovely they look too! With two box sets, he was able to make a large layout for the Marines and Genestealers to fight in. Dean took the Genestealers and Ninjasaurus and I took five Marines each. The basic premise was for the Marines to survive for 15 turns. Did we do it? Well, read on and find out... 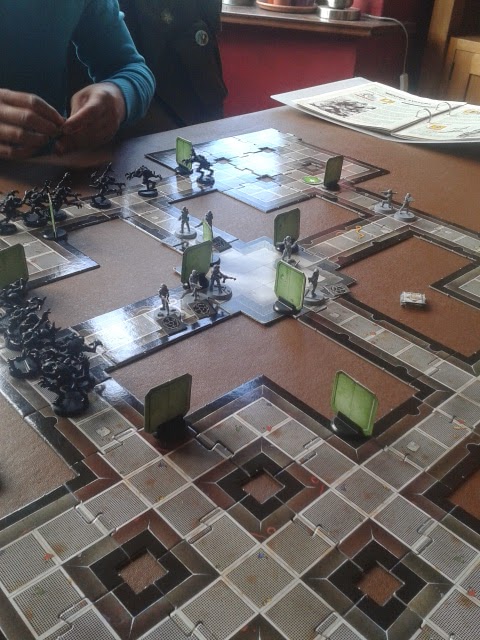 'How many drops for you is this Lieutenant?' 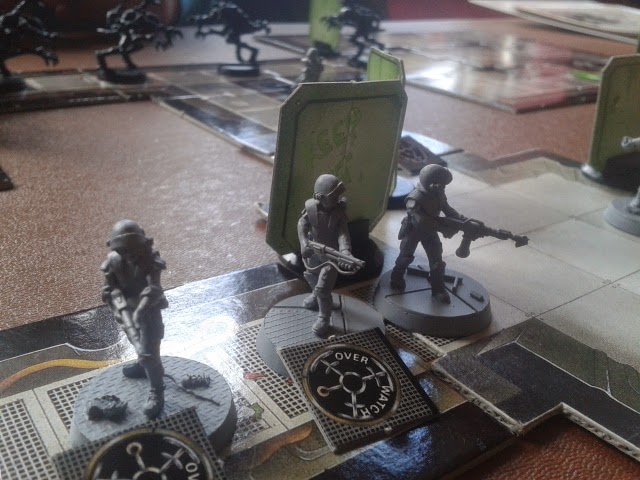 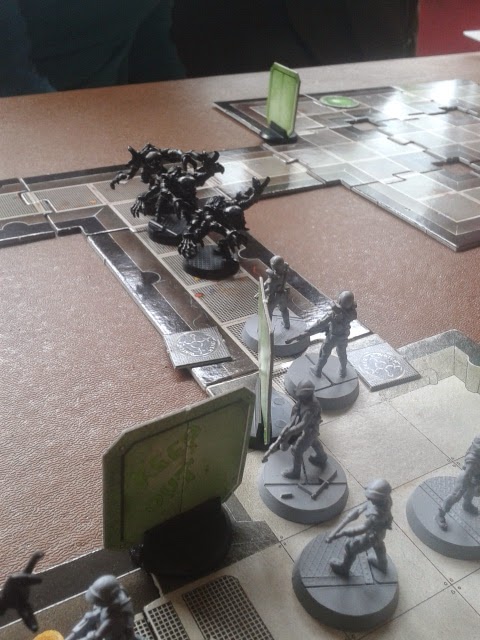 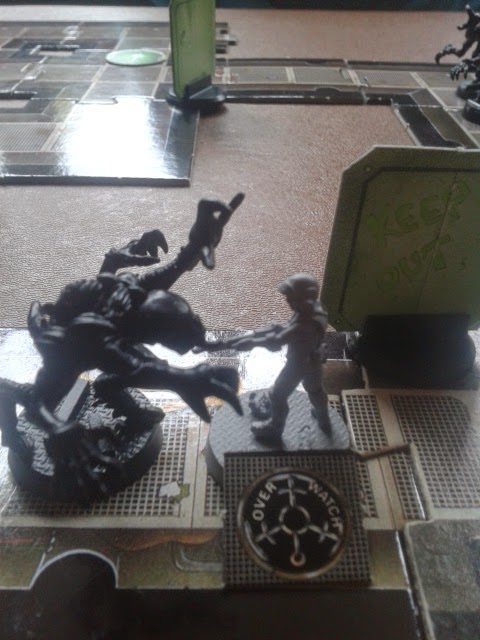 'I like to keep this handy, for close encounters.' 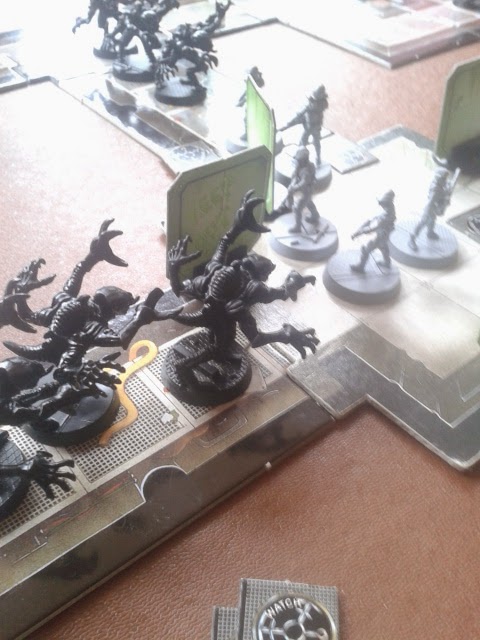 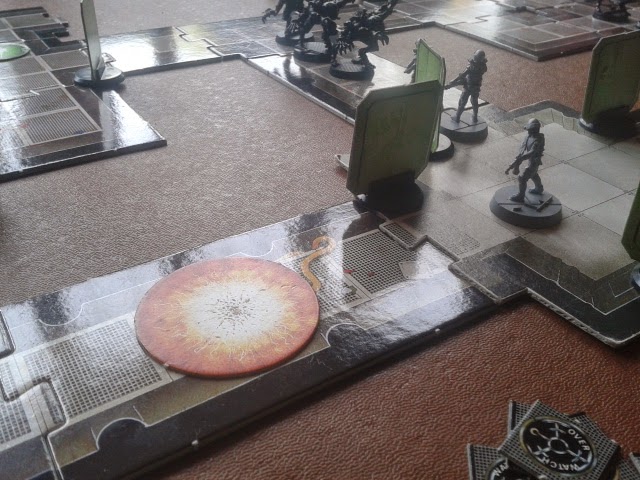 'That's the grenade launcher. I don't think you want to mess with that.' 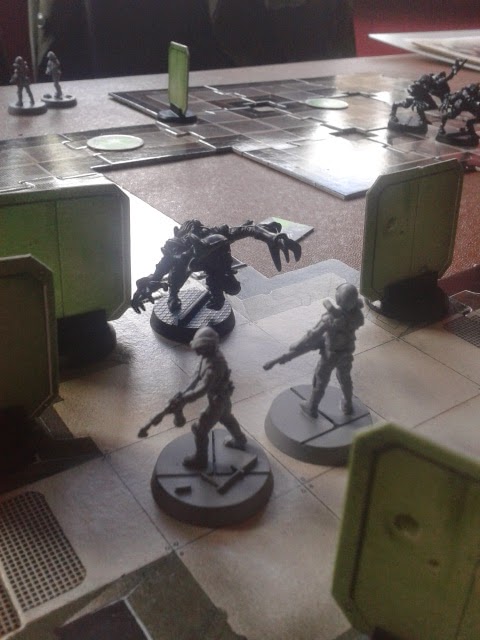 'Maybe we got 'em demoralized.' 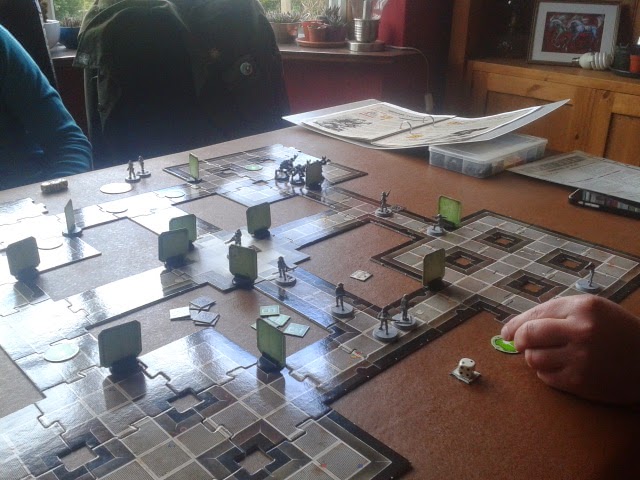 'This installation has a substantial dollar value attached to it.' 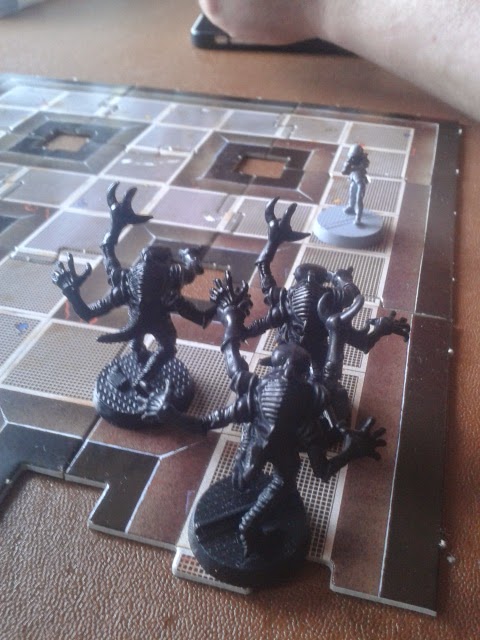 'That's right outside the door. Hicks, Vasquez get back.' 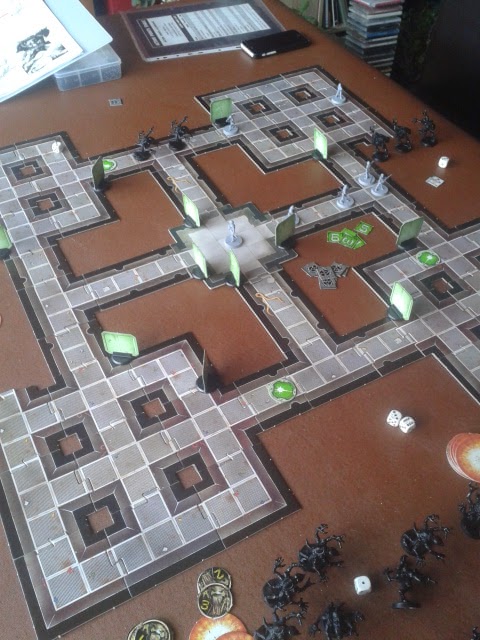 'My mommy always said there were no monsters - no real ones - but there are.' 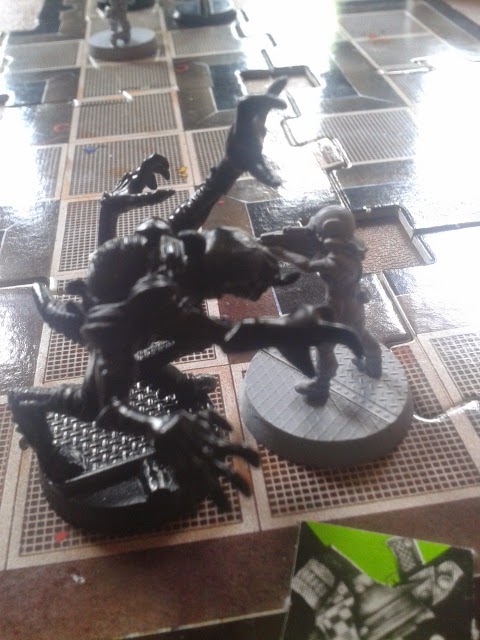 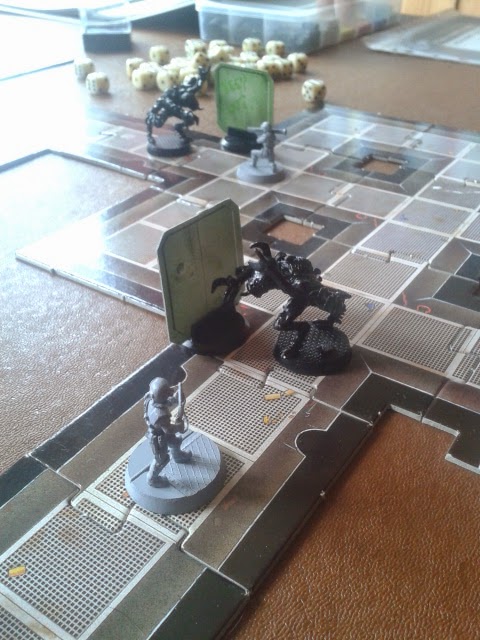 'Oh, maaaaaan and I was getting short. Four more weeks and out, now I'm going to die on this rock. This ain't fair man.' 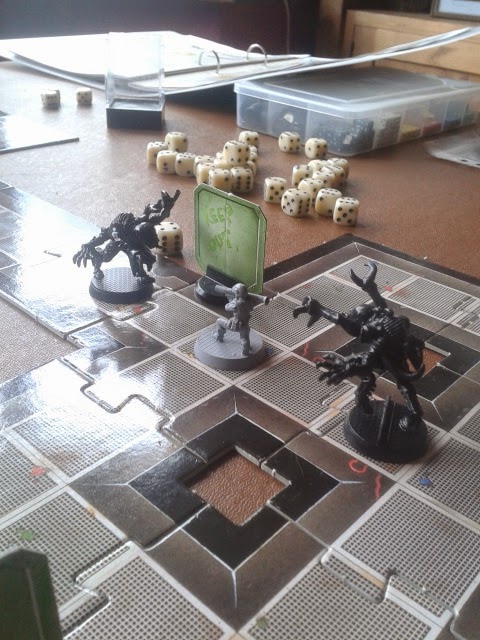 'You always were an asshole, Gorman.' 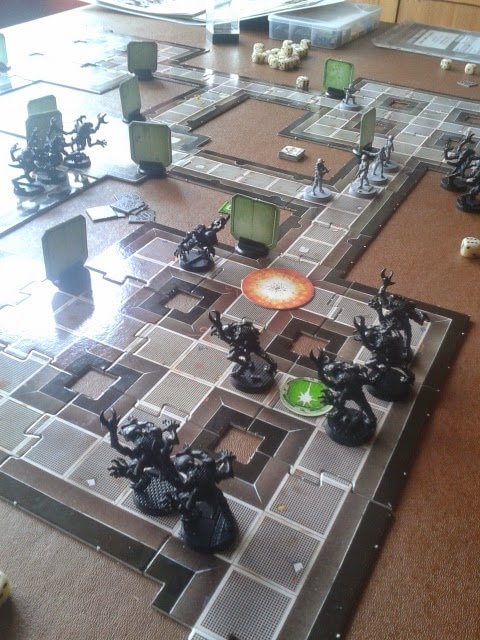 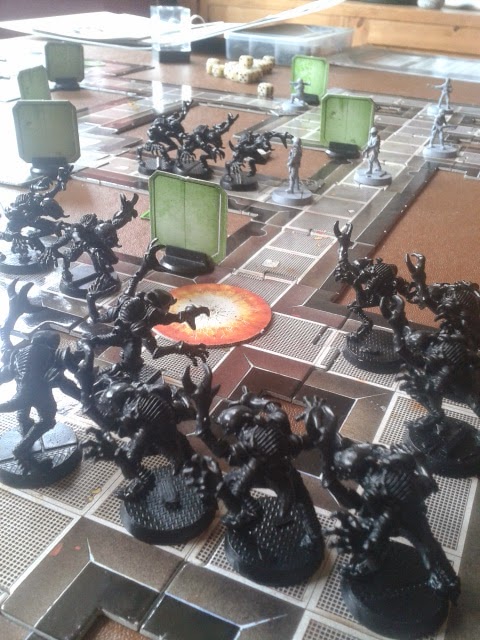 'I say we take off and nuke the entire site from orbit. It's the only way to be sure.' 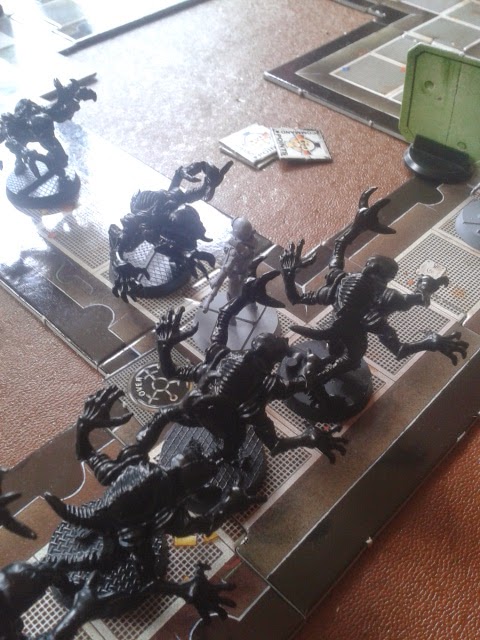 'Look, I'm telling ya, there's somethin' movin' and it ain't us! Tracker's off scale, man. They're all around us, man. Jesus!' 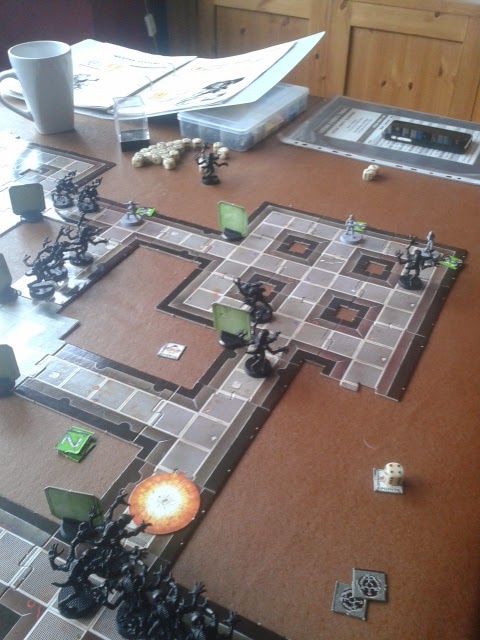 'I got signals. I got readings, in front and behind.' 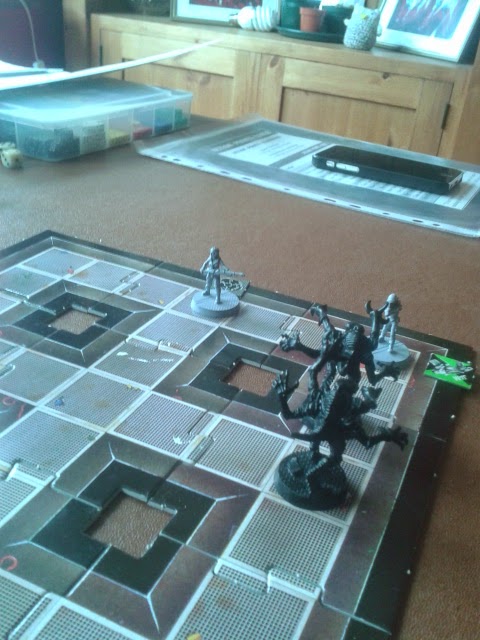 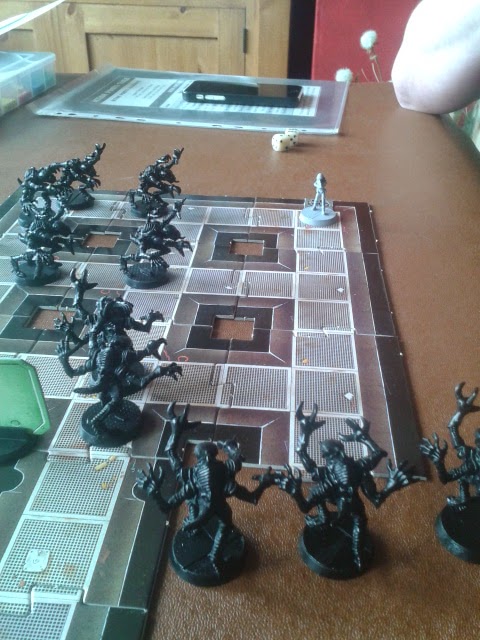 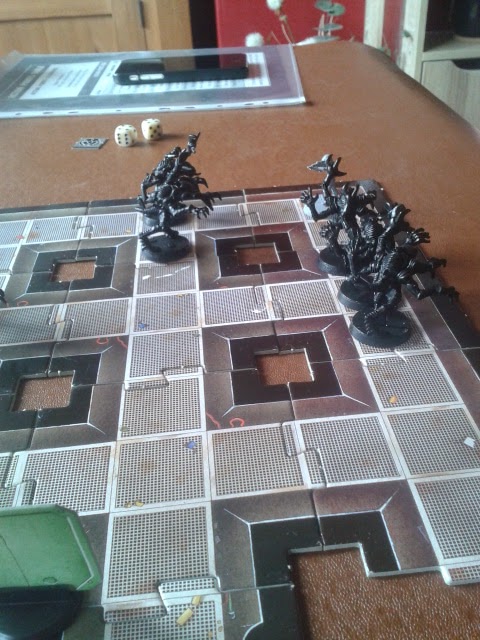 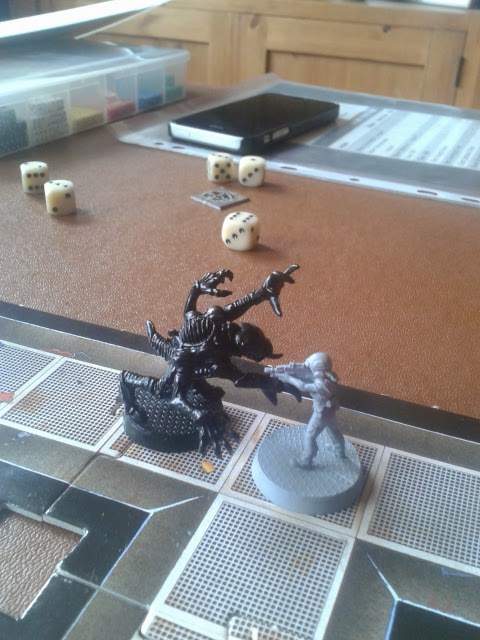 For the Marines it was game over. Our last soldier was eaten by a Genestealer on the fifteenth move despite doing her best to take down as many of them as possible. It was a slow attrition from the start and even though there were long corridors to fire down the xenomorphs just kept coming! As usual, the game was pretty intense and we realised very early on that the room we began in just was not defensible. We were in the process of regrouping elsewhere, when the swarm overpowered us!

I expect we'll have a few more games of this in the future, so stay tuned for more AARs!

Thanks for reading!
Labels: 28mm AAR board games Science Fiction