Unquiet on the Western Front

On Saturday, Ninjasaurus Rex and Dean called over for a game of Through the Mud and the Blood, it was to be our second game of it and I was wanting to try out some of the Germans I have recently painted. This included the heavy flammenwerfer team from Early War Miniatures. As the first game of TtMatB was a German defence against a British attack this one would reverse the roles and have the Germans attacking a British entrenched position augmented by the addition of a pillbox.

The attackers had to attack and capture the pillbox to win the game.The defenders had to prevent this from happening.

The attacking forces (Ninjasaurus Rex and I) consisted of:

The defending British (Dean) were entrenched with:

Everything was deployed on blinds with the Germans spread out trying to take advantage of what little cover there was: 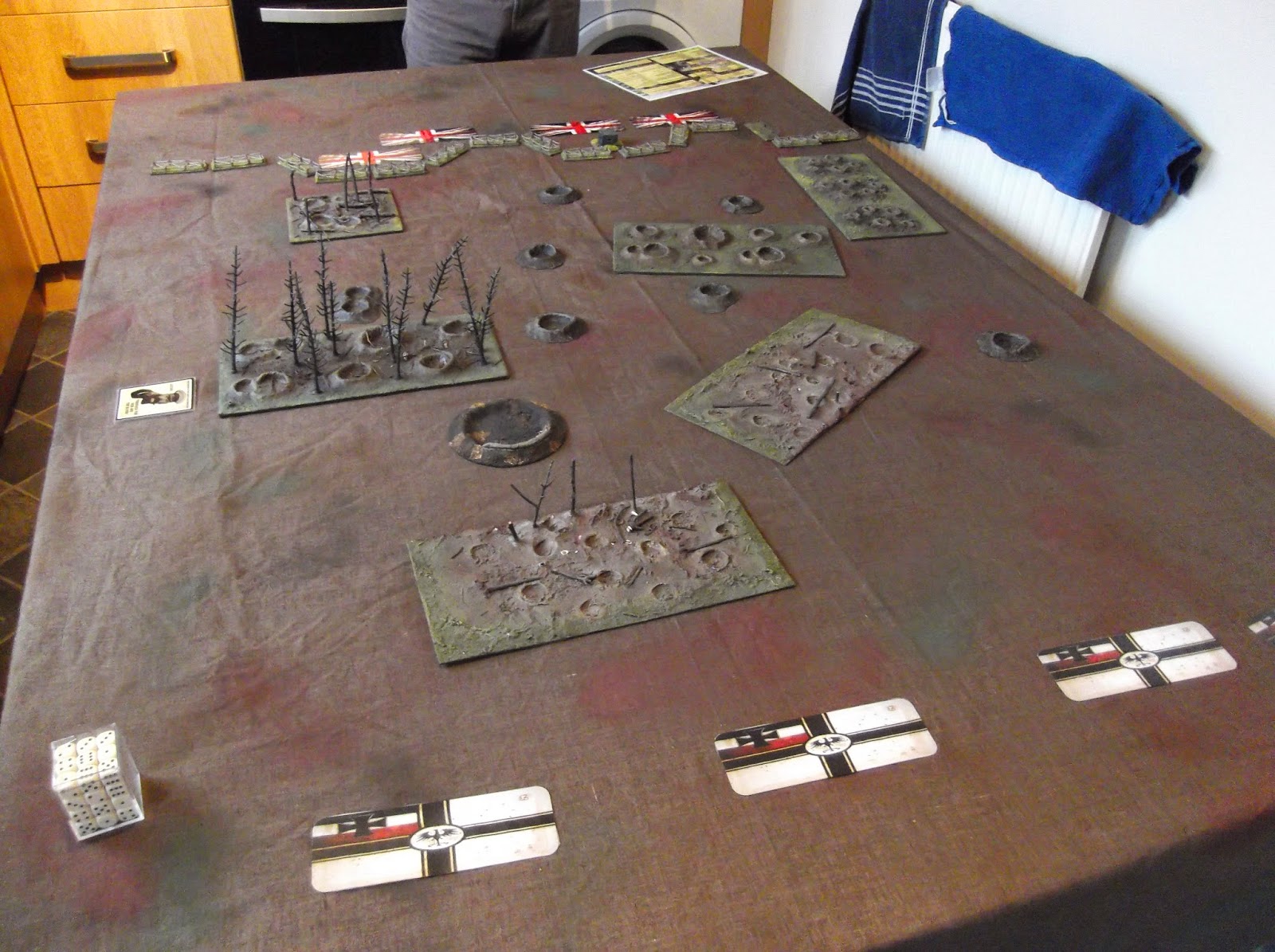 The shattered woods on the German left flank shielded our movement but the flammenwerfer and the rifle group under Lang were spotted on the right hand side. 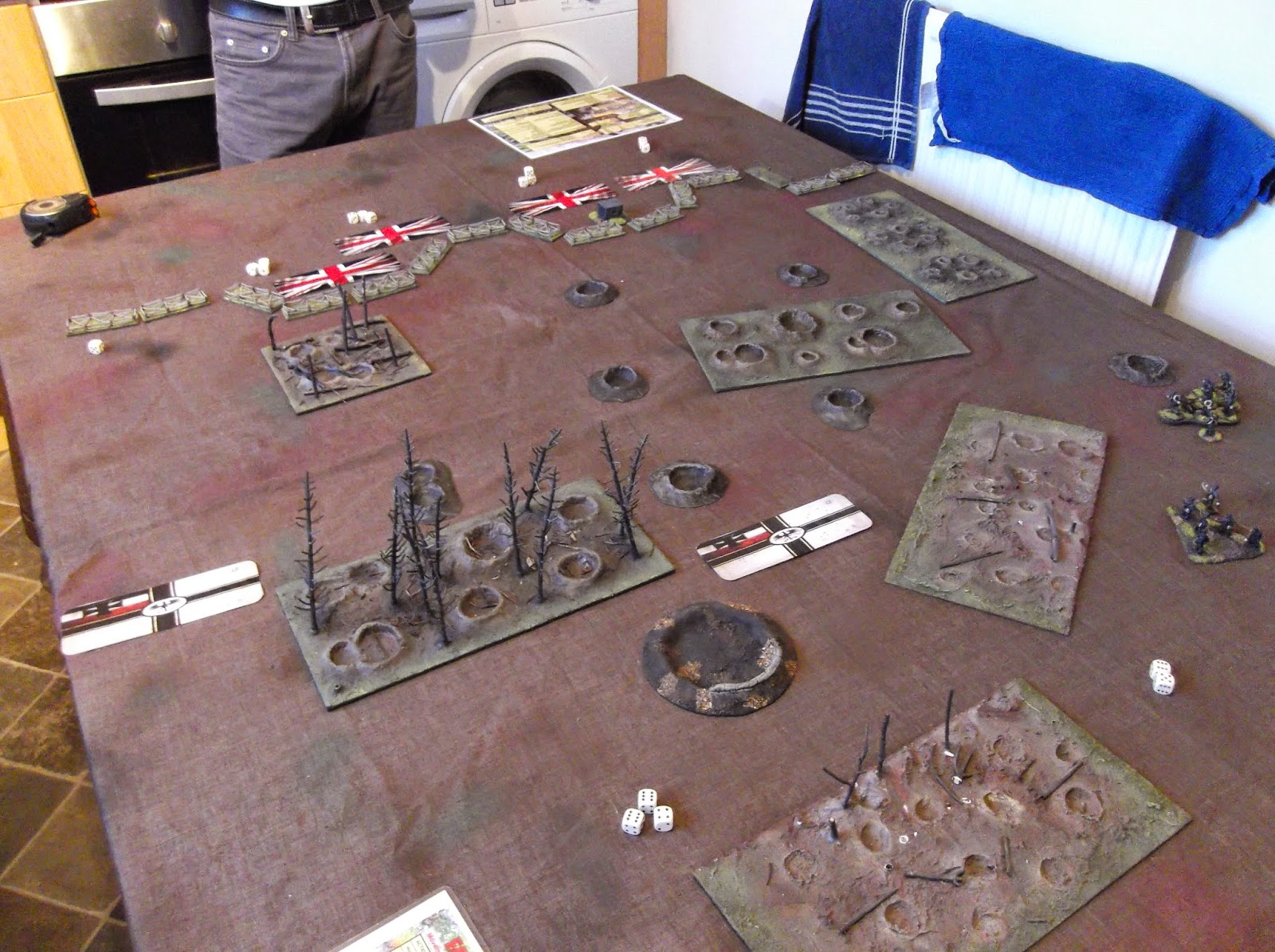 The British defenders revealed themselves on the parapets and opened a whithering fire against our right flank. Meanwhile the other attacking rifle section led by Adler had got close to the British wire by skirting the edge of the woods. This meant that the grenadiers were still advancing as a blind in the centre. 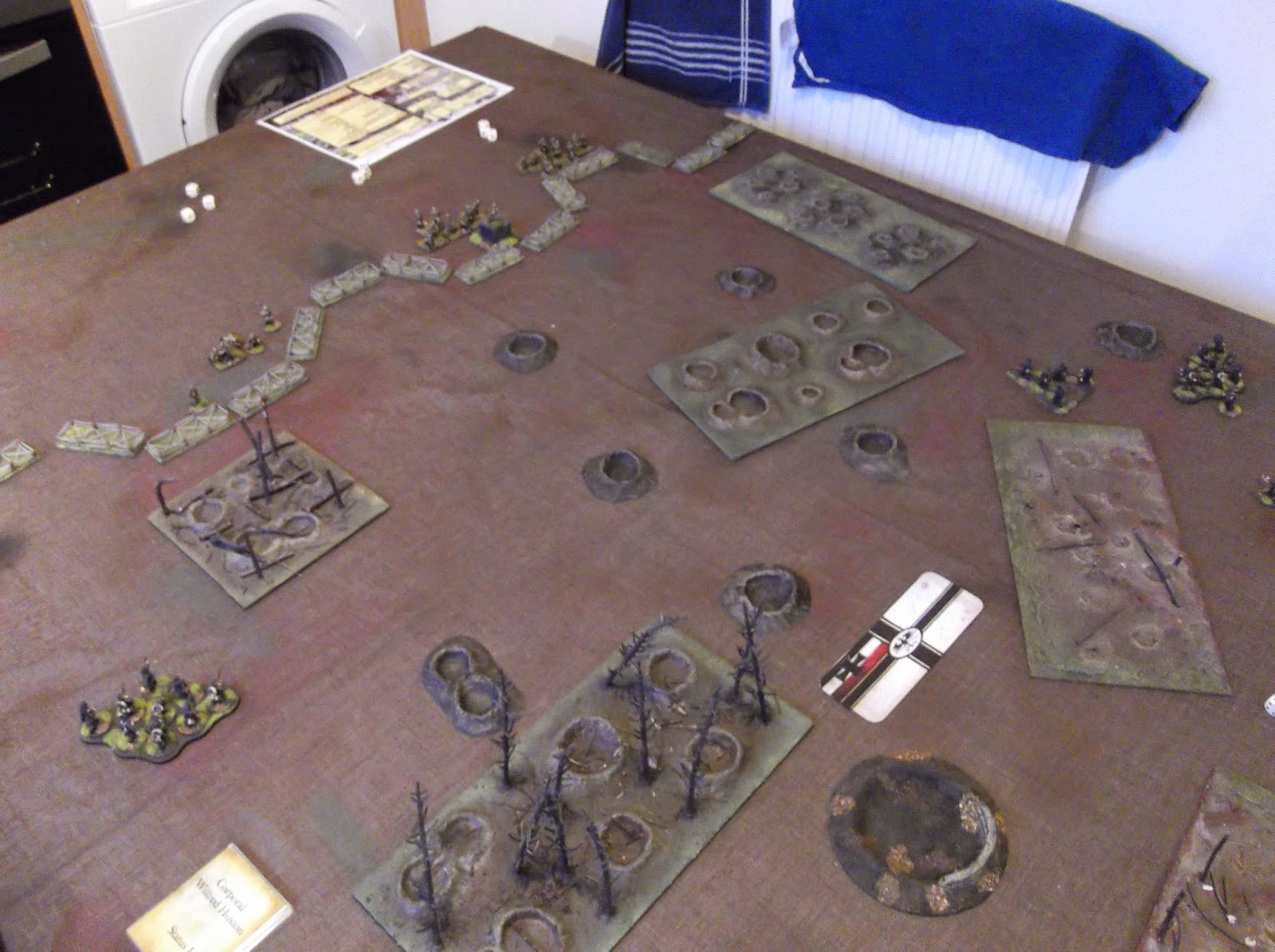 Dean had placed his HMG on his right flank commanded by Becton and Millwall and a deadly duel began between it and Adler's rifle section threatening that area. He managed to get off a burst of fire, but then the gun jammed! 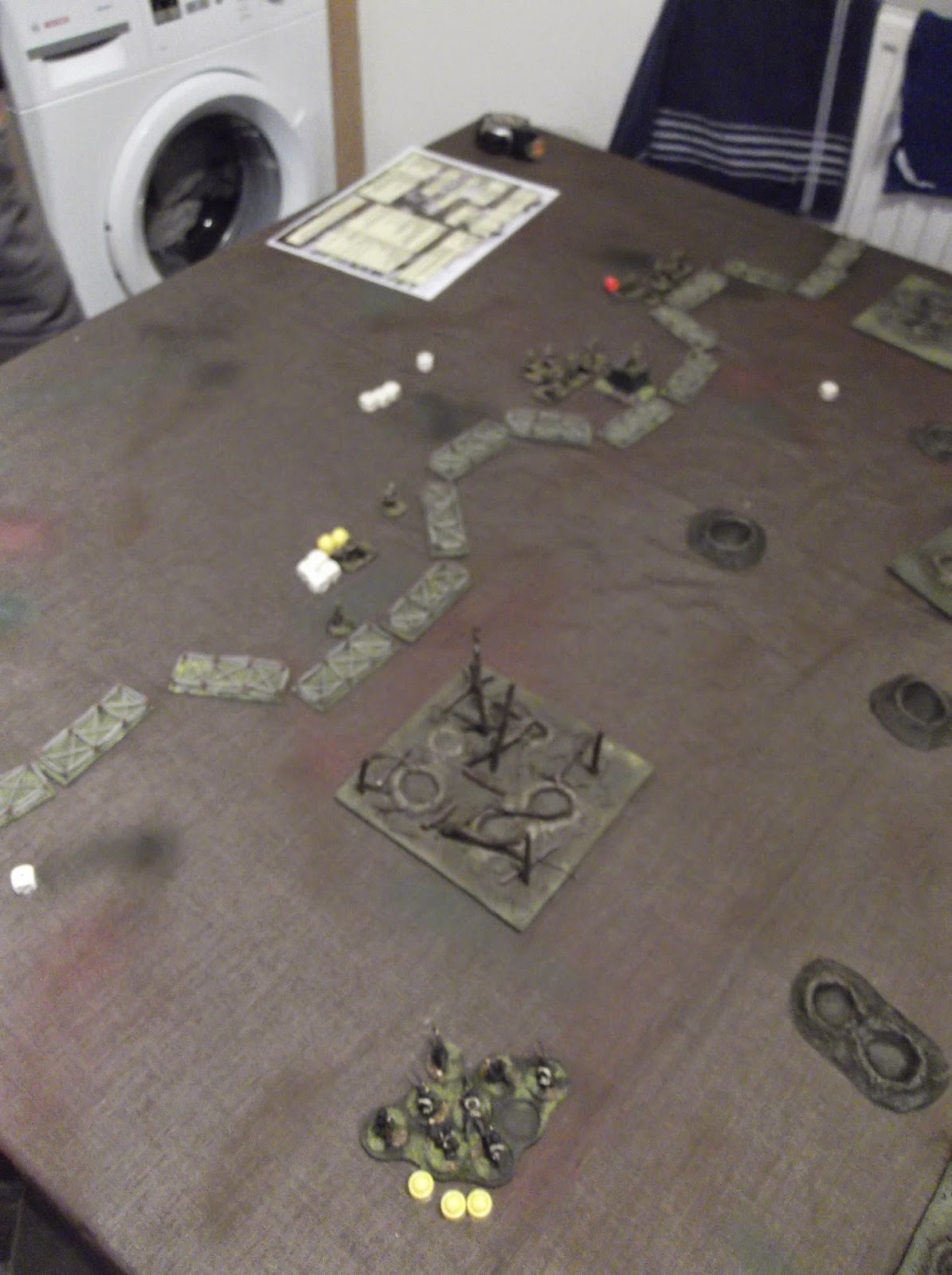 Unfortunately for us the burst of fire badly injured Gefreiter Adler commanding this section and he had to be helped off the battlefield by two other men! This left us with six men and three points of shock. Thankfully a replacement Big Man was found in the ranks and up stepped the thrusting Jager Hans Swartz to lead the men! 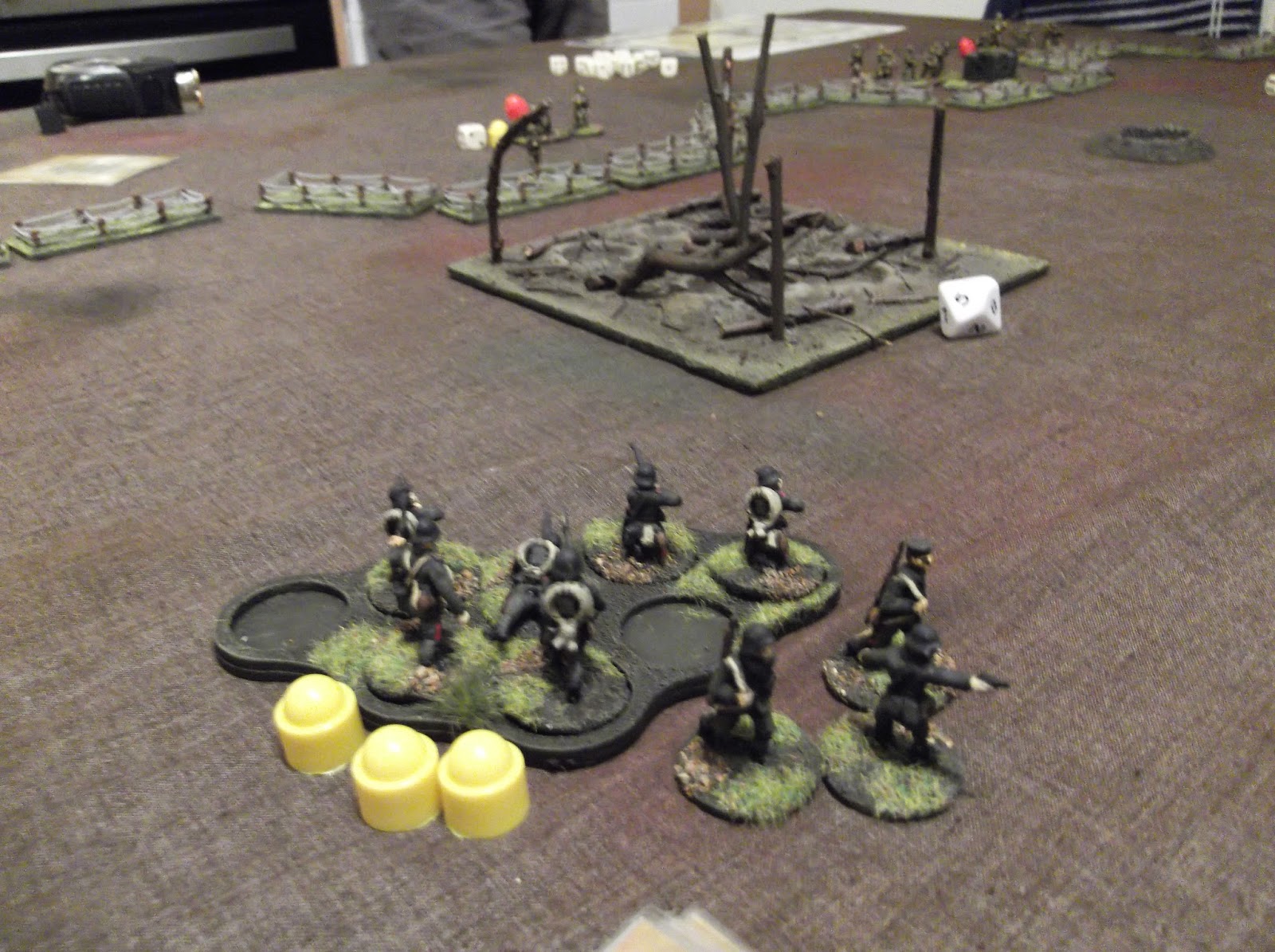 On our right flank the attack had stalled somewhat, the flammenwerfer crew had been killed to a man in the previous round, so Dean had been concentrating his fire on the flanking rifle section. Fortune was smiling on him and a lucky shot hit Gefreiter Lang, injuring him and adding the loss of two more men to help him off the field. 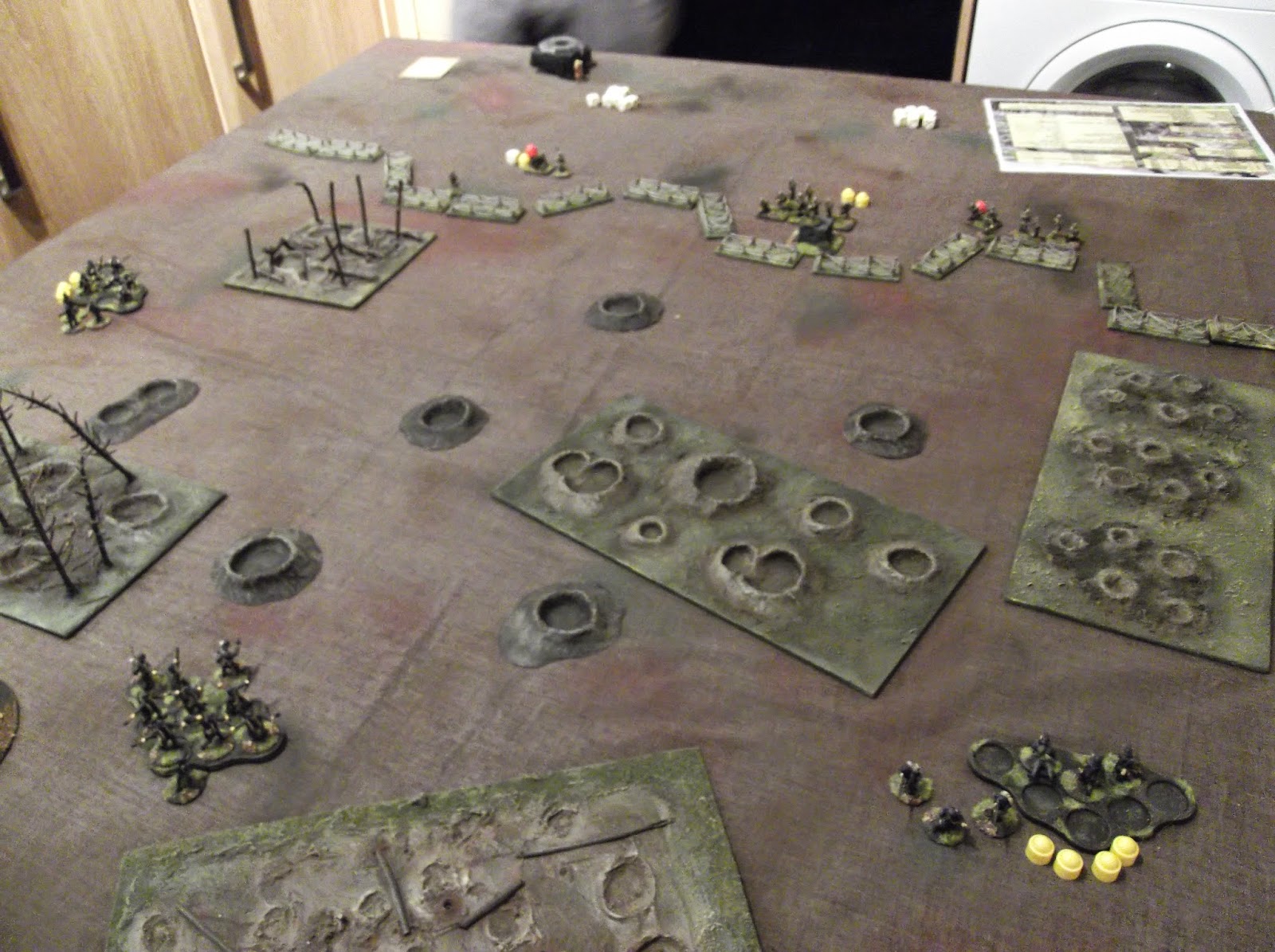 The German men of the match was the rifle section on the left flank who had managed to destroy the HMG and then rush the enemy line capturing the Second Lieutenant Millwall in the process! Swartz was looking at a promotion and an Iron Cross for his part in leading the attack! However, this action had cost them another man who was sent to the rear escorting the captured Millwall. 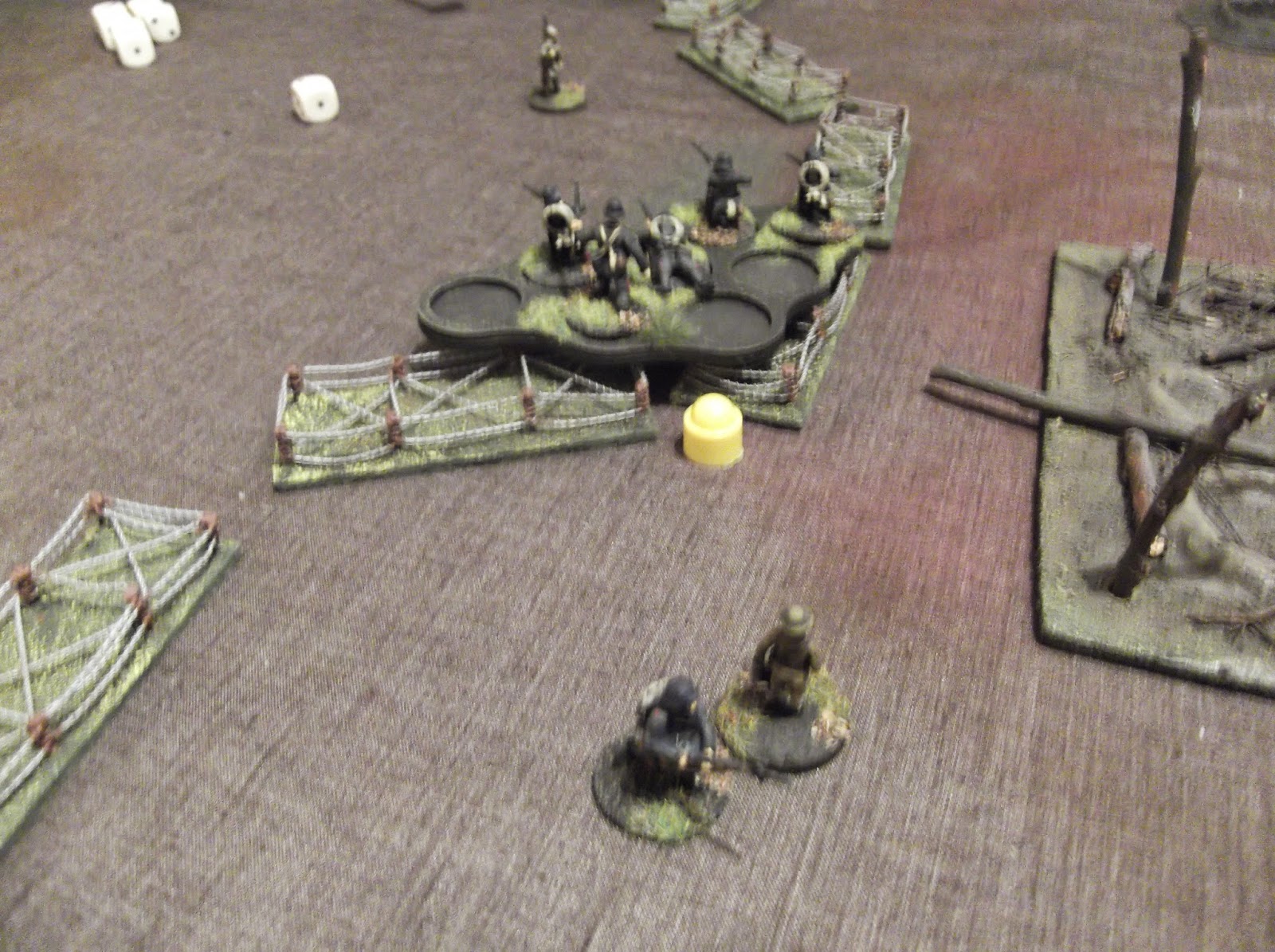 The rifle section was now able to fire at the pill box, but caused very little damage and were stuck on the wire. 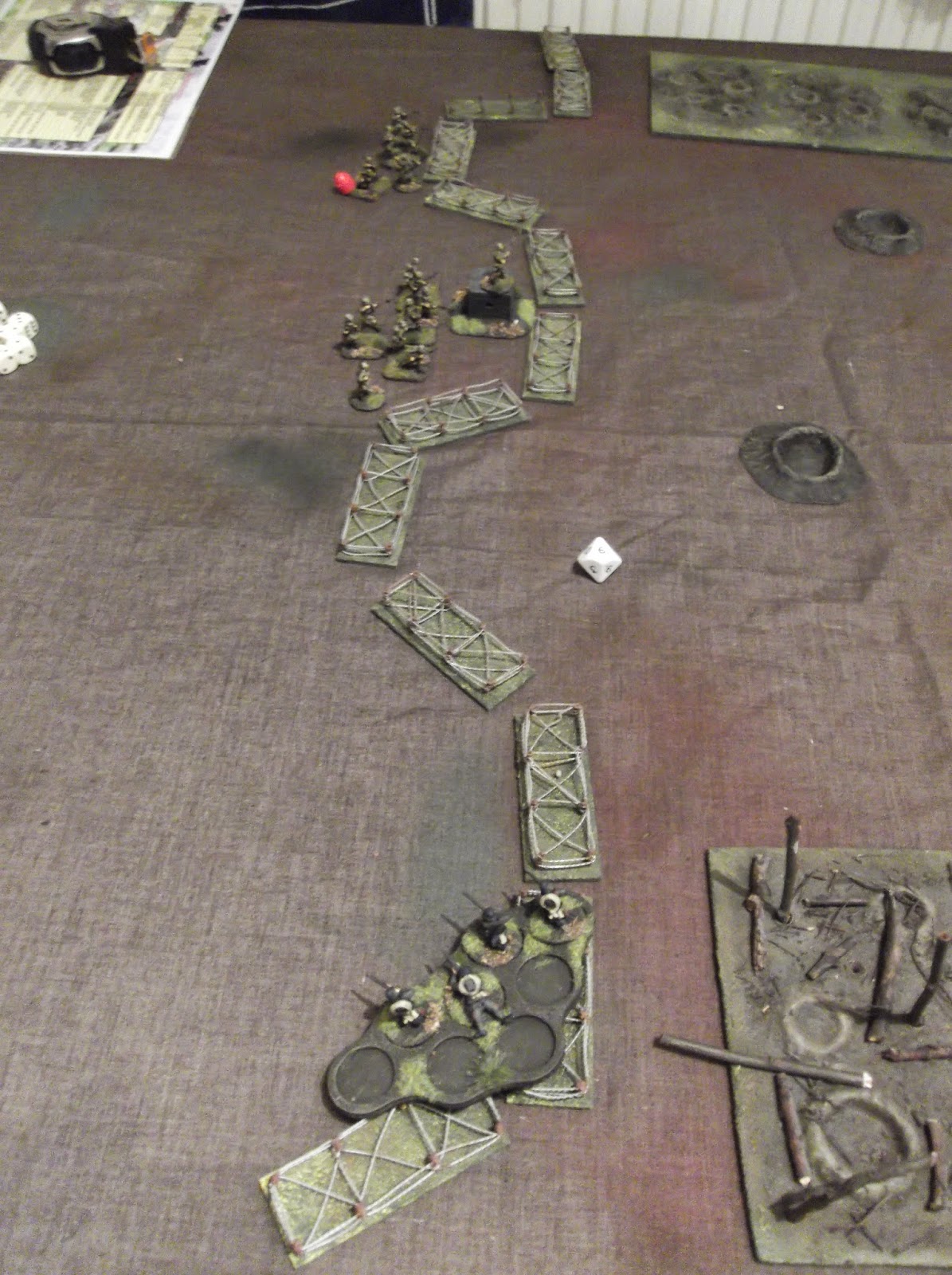 The attack in the centre had failed to materialise even with the accompaniment of Von Beck and Sturmer, the entrenched British had shot down our attackers like fish in a barrel and only seven men remained from an attacking force of twenty five on this flank! 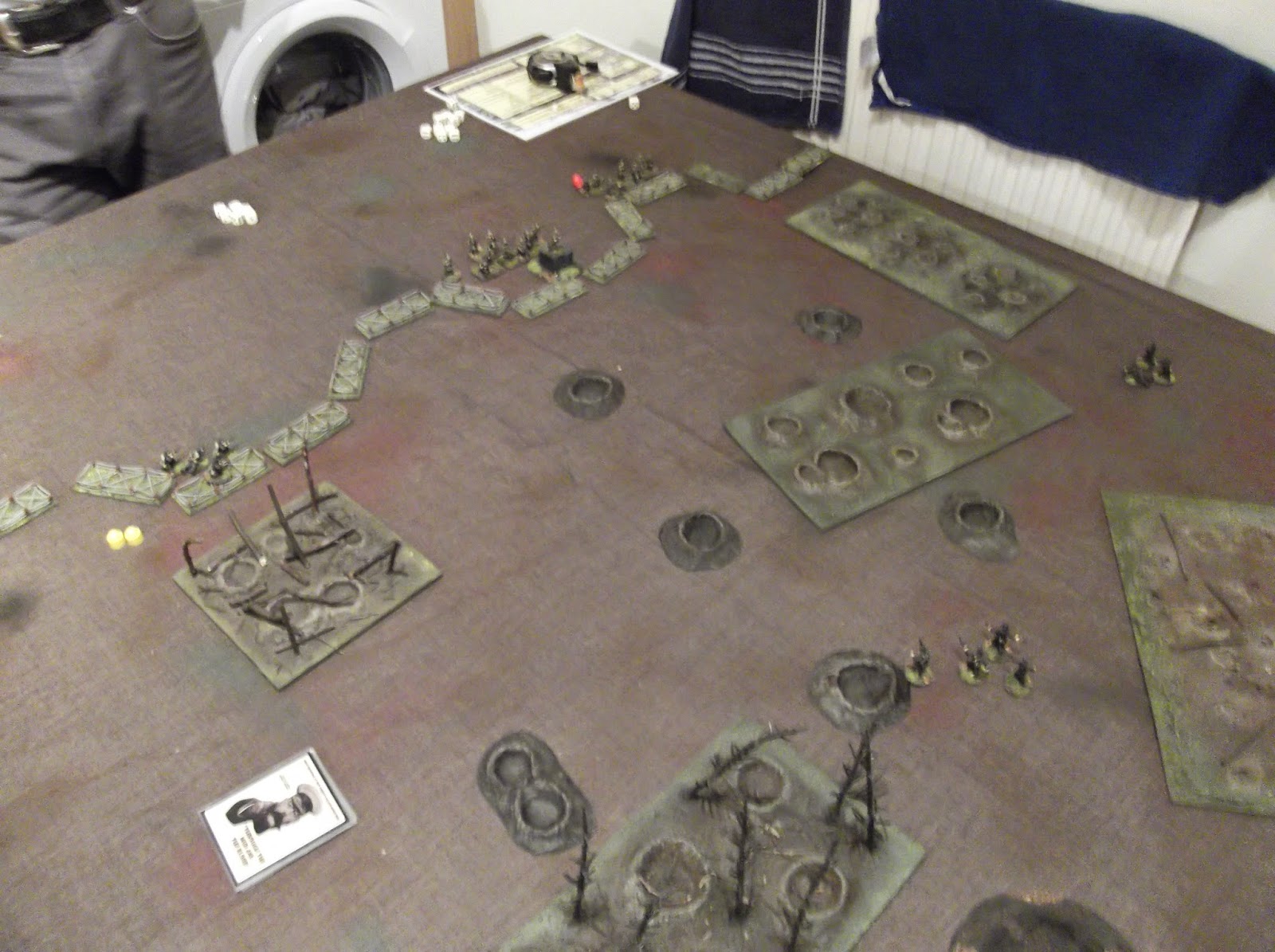 So the game was up, the German push had failed, but in good news we'd managed to capture a British officer. I think the difficulty in this particular scenario was the fact that there was very little cover on the table, so we had to advance in the open. Also, I don't think we are using Big Men to their full advantage, but as this is only our second game, we still have a lot to learn!

Thanks for reading!
Labels: 20mm AAR Through the Mud and the Blood WW1