The Plastic Soldier Company recently released the product I have been eagerly awaiting for several years now; German Stowage and Tank Commanders. To say I was excited to get my hands on this is an understatement. I LOVE STOWAGE!

However, finding it in 15mm is a bit of a nightmare, there are only a couple of companies that I know of who produce stowage, namely, Command Decision, Reiver Castings and Battlefront (there is probably many more, but these are some of the best I have found, let me know if you know of others. I'm always on the look out for new stowage). The latter produce my favourite bit of stowage, a pair of tank wheels with track wrapped around them for the front of a Panzer III or IV. Other than that, Battlefront stuff is expensive and not great, some of the Reiver Castings stowage is a bit on the big side, being designed for both 15mm and 20mm and the Command Decision stowage is a bit ropey in places, the jerry cans in particular.

So the idea that PSC were releasing specific stowage ranges set my heart a'thumpin'. I love PSC's products, they are well proportioned, well thought out and with clean mould lines, so I have very few problems with them. However, one of these problems is the amount of plastic left over from the various vehicle versions that they offer in each box, but I would rather have more choice in a box of tanks than less, so it's a minor gripe, really. But I will come back to this point in this review later.

The German stowage set was released last week, and I ordered mine reasonably quickly and as always with PSC, the customer service was perfect and the box dropped through my door in a matter of days: 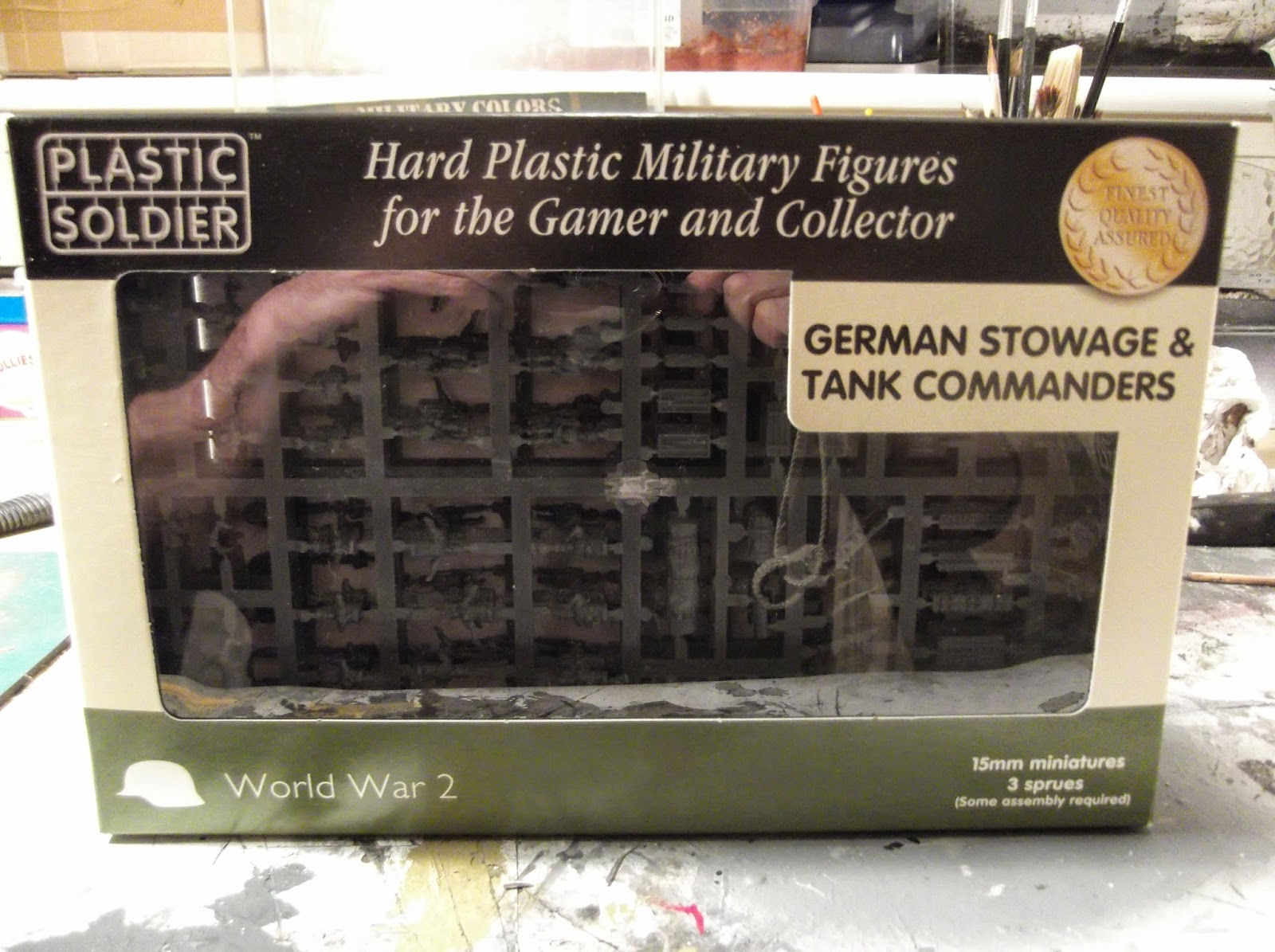 As I said, I find all PSC products excellent from their manufacturing point of view. This one was no different, three sprues full of material, all well detailed and clean in mould lines. However, this is where my enthusiasm waned somewhat. The actual amount of stowage is quite low. I was looking forward to lots of tarps, bags, drums, netting, etc. 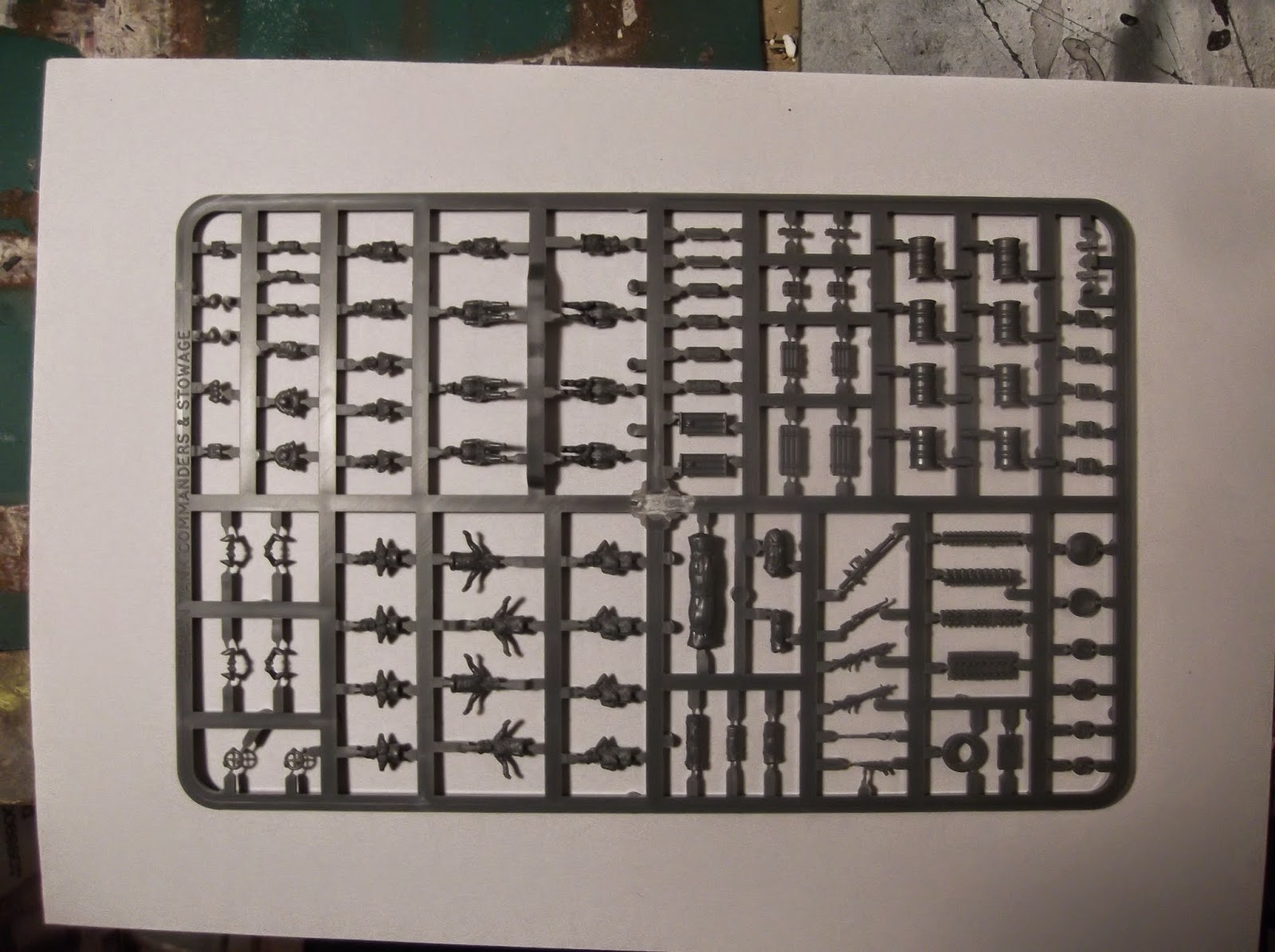 As you can see from the picture of the sprue above, there are only 6 tarps, 4 oil drums, 5 jerry cans and various ammo crates. With only three sprues in the box this still doesn't add up to a lot of my beloved stowage. The other half of the sprue is made up of drivers, passengers and tank commander figures, twenty five in total! That means seventy five in the entire box! I can see the need for drivers and passengers, they could be useful for some open top trucks and cars, but the inclusion of so many tank commanders leaves me bewildered.

This is what I dislike about PSC, the amount of wastage in plastic; For every PSC tank they provide at least one tank commander figure. Personally, I would only ever use one tank commander on one tank in, say, five, just to show which was the unit leader. I know others may be different, but this means that I already have a surplus of commanders and I certainly don't need another 51! I understand that other manufacturers, Zvezda, for example don't provide commander figures with their tanks, but I really think this is overkill. Personally, I would have sacrificed the tank commanders for more stowage and given that these sets are £12.95 the actual stowage you get is rather more expensive than what you get from Command Decision!

I feel terrible about slating a PSC product, as until this point they have been impeccable in every way, but I have to be honest and say I probably won't be buying another stowage set as they are simply too expensive and I will be left with lots of tank commanders that I can't use or pass on. On the plus side, the detailing is great, the moulds are clean and sharp and the stowage itself is well thought out. I am interested in hearing what others thought of this set as well!
Labels: 15mm Germans Plastic Soldier Company Product review WW2