SS 143, Instructions for the Training of Platoons for Offensive Action

With Sunday being the centenary of Germany declaring war on France we decided to play our first game of Through the Mud and the Blood. I have been putting together this project for a while now with 20mm mostly plastic figures and it was time to test the rules. The game was based on the first scenario from the Stout Heart and Iron Troopers supplement, which deals with a British infantry platoon attack on a entrenched German position. In the original scenario the Germans had two sections and a machine gun. However, I don't have a painted machine gun, so I supplemented the force with a third section.
The opposing forces were:

The German blinds were placed in trenches around the crossroads, we used barbed wire to designate where they were dug whilst the British entered on the opposite board edge as blinds. 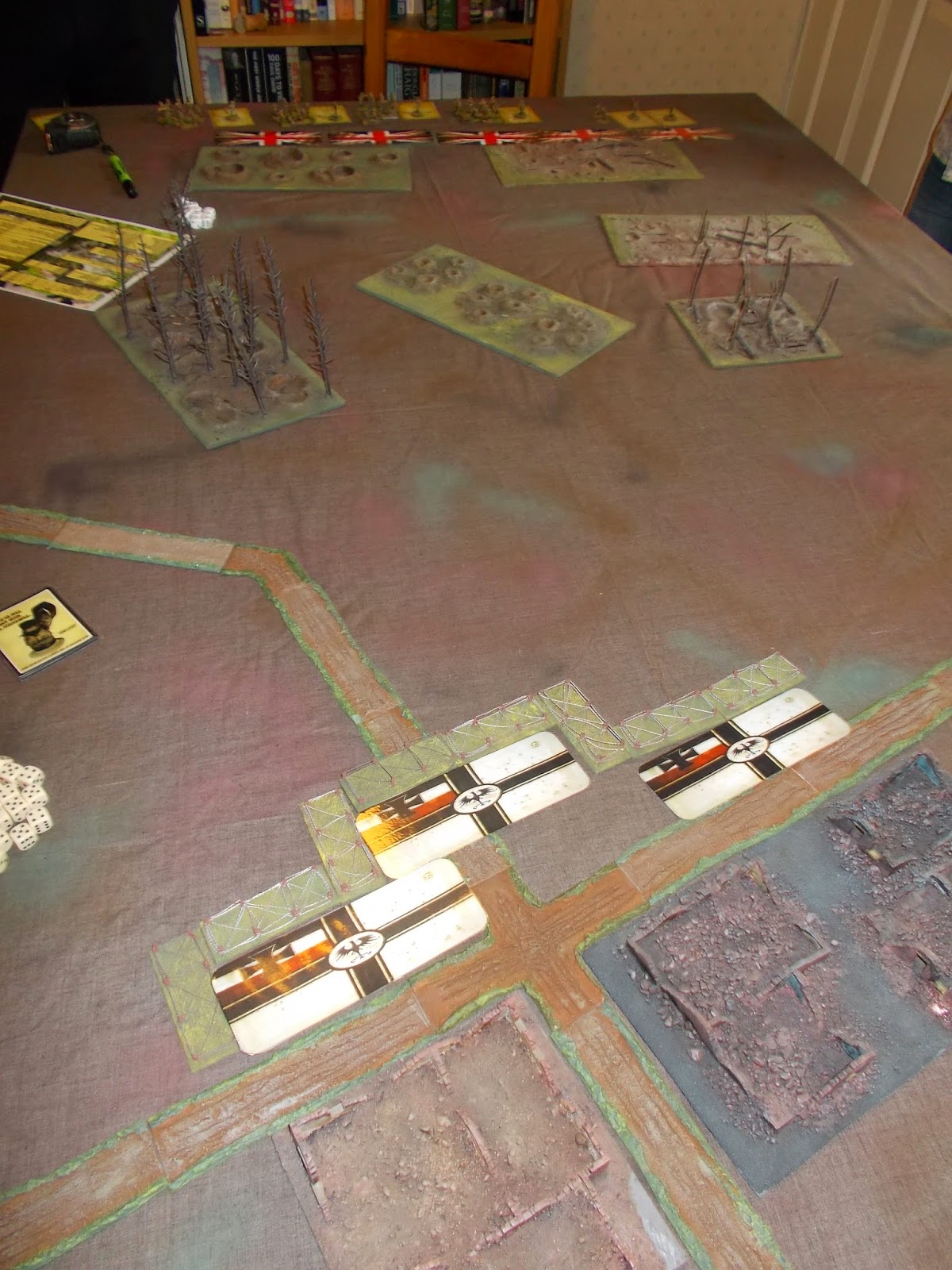 Dean and Ninjasaurus Rex controlled the British and I took the German defenders. I would also act as umpire as I was the only one who had read the rules! The British blinds were all marked on the bottoms as to which section they were, so I had no idea what was advancing where. 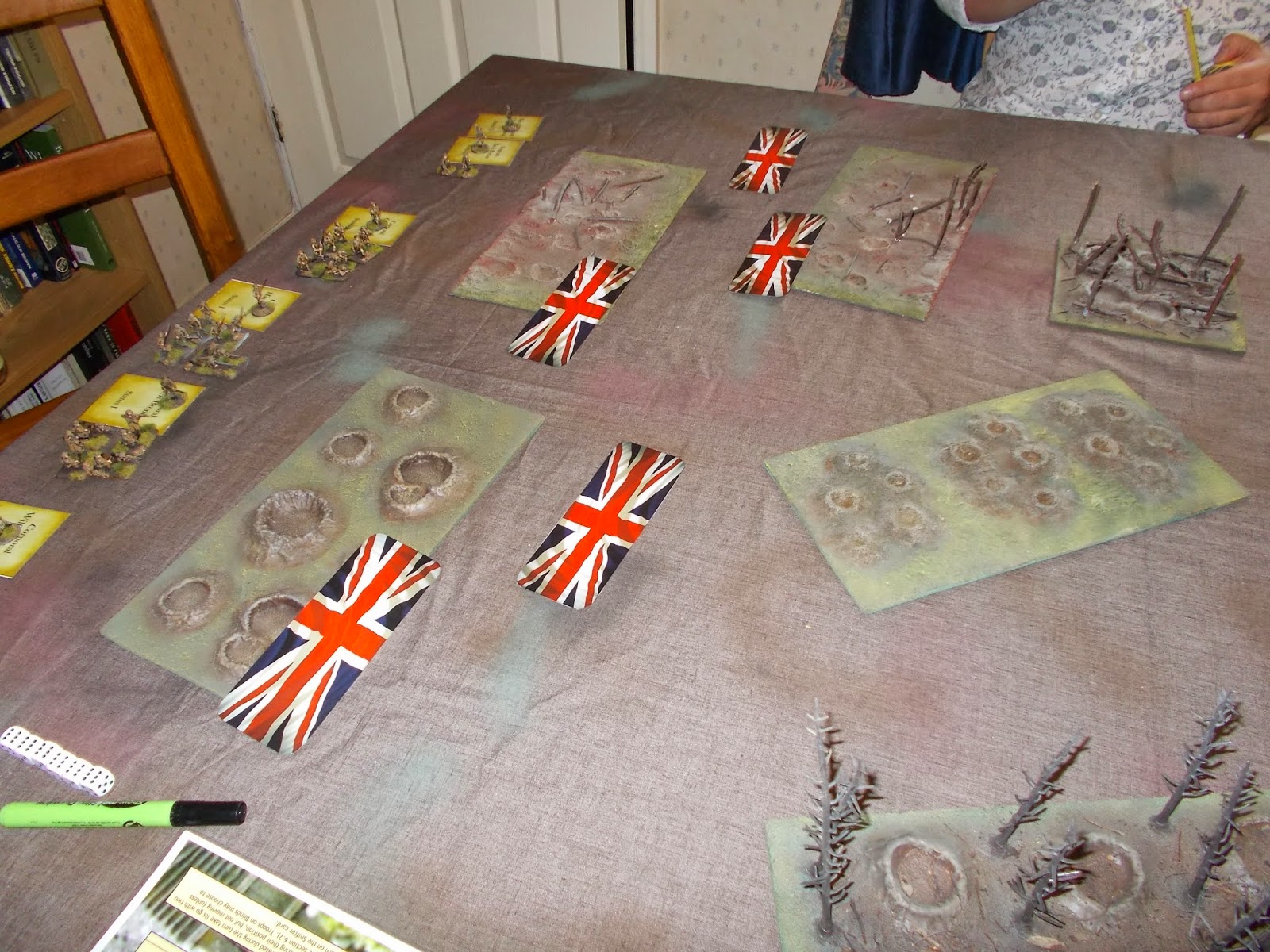 When the German blinds card was drawn, I activated the right flank section and spotted the advancing British rifle grenadiers in the woods and opened fire, causing some shock. 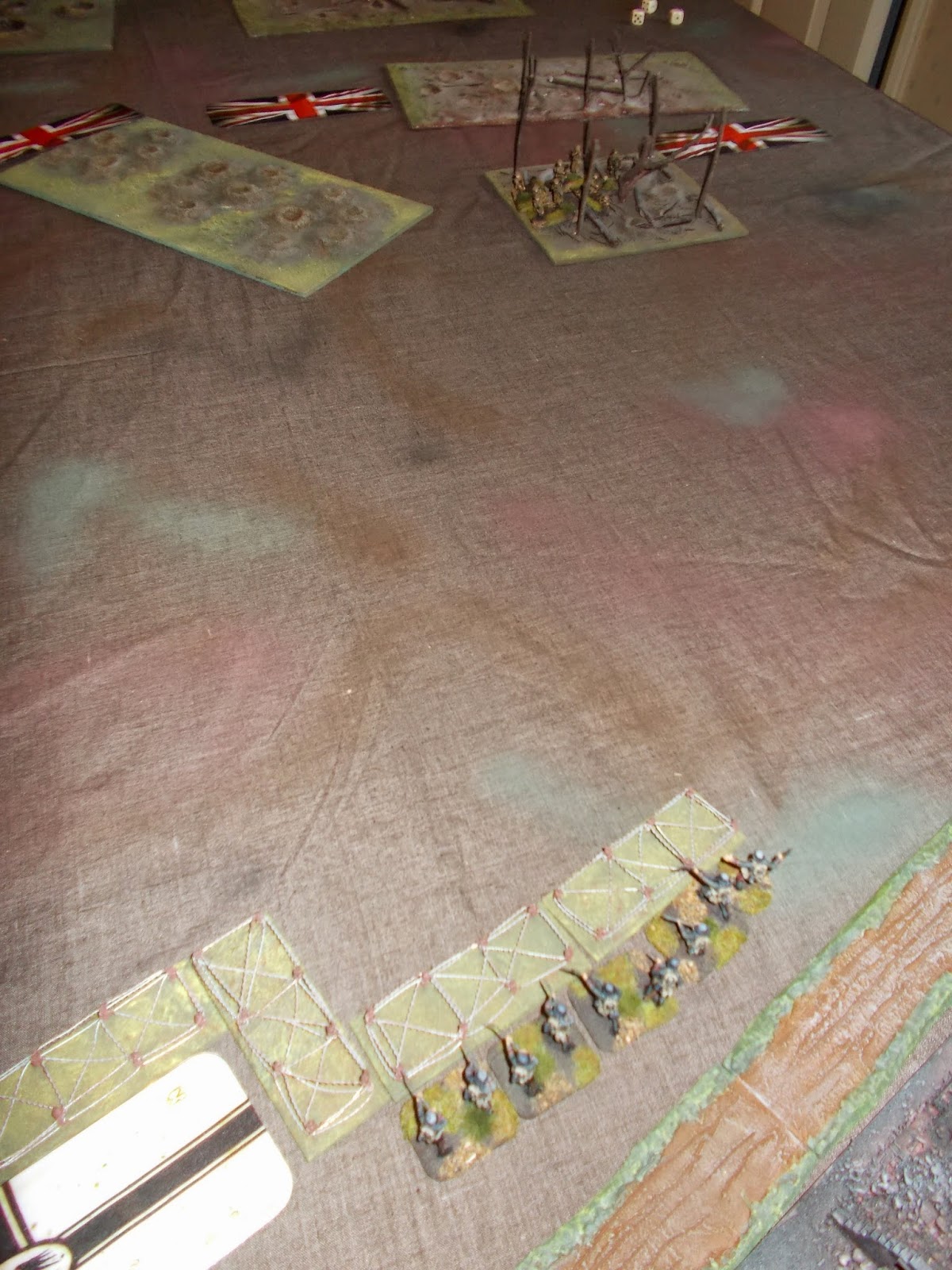 The British continued the advance (with plenty of jokes about Blackadder and Lions and Donkeys, just to upset me and put me off my game...) and the bombers appeared on my flank. 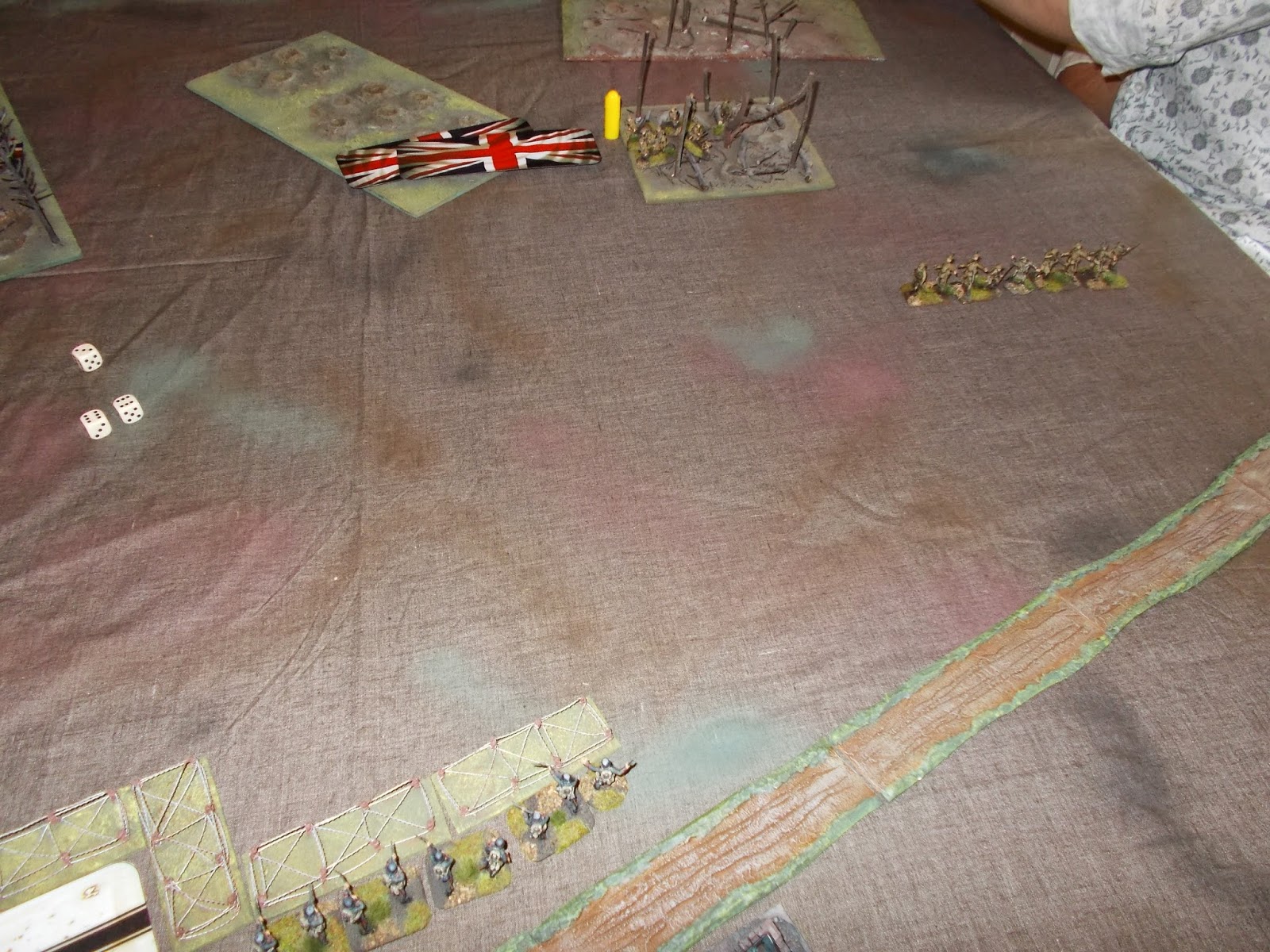 I revealed all the German units and started firing at the advancing British blinds, all the while the bombers crept closer and closer. I was lucky enough to score a few kills before the blinds in the centre had a chance to reveal themselves. 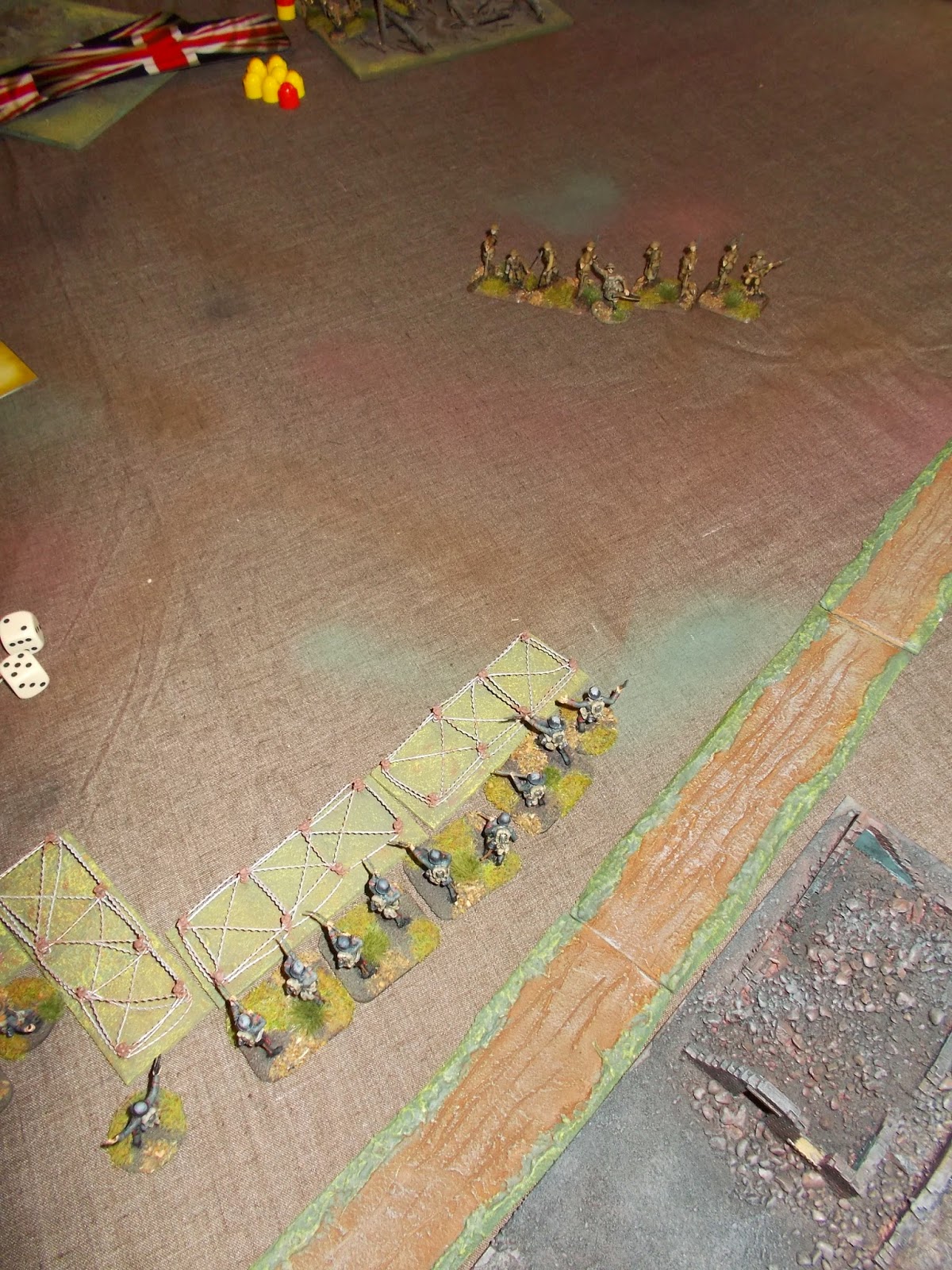 Then the bombers did their dirty work and a hail of Mills bombs killed three of my riflemen. 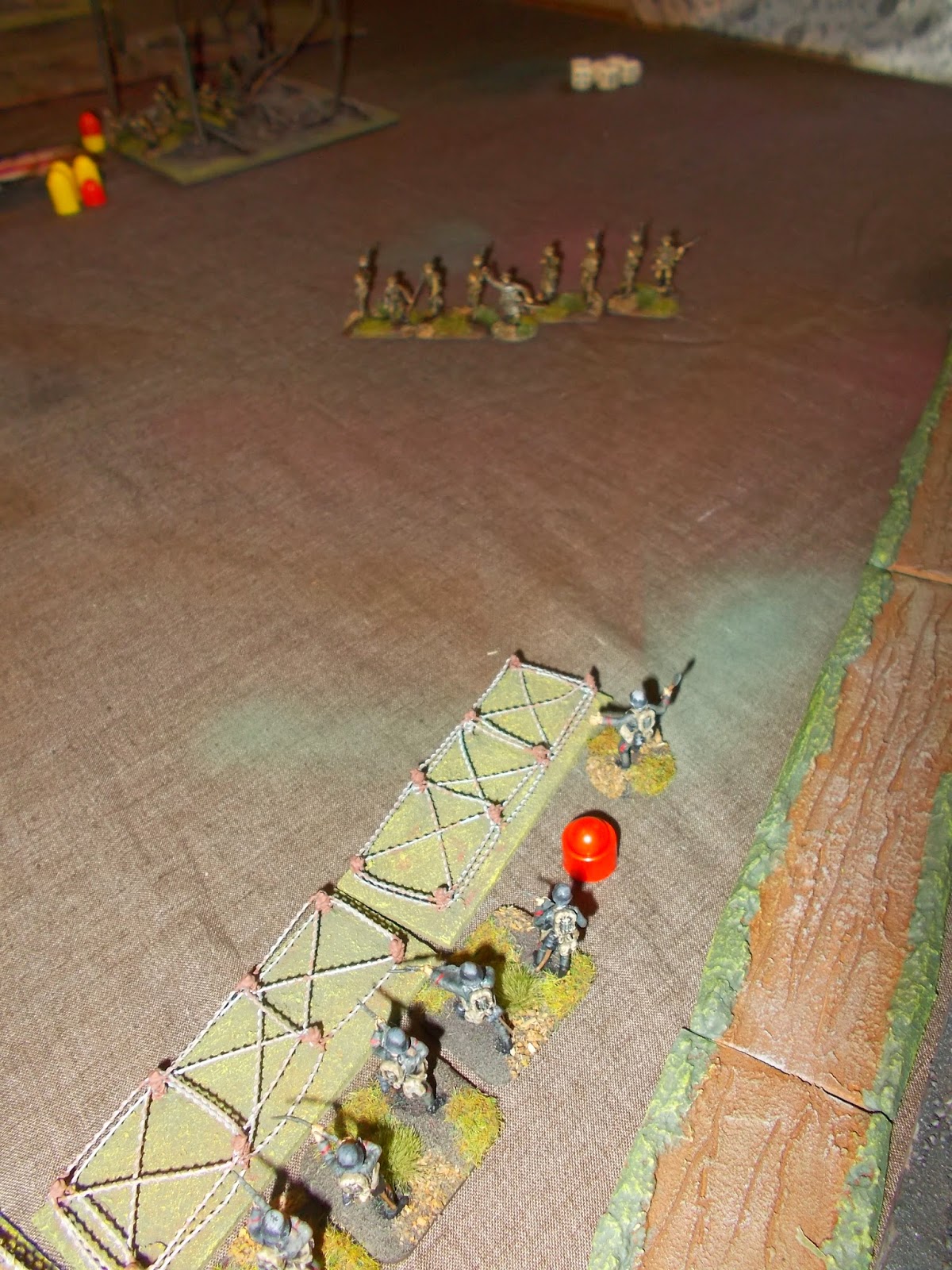 Now all the troops were on the table, the Lewis was positioned in the woods on my left flank, with rifle grenadiers covering the bomber advance on the right and the command and riflemen in the centre. 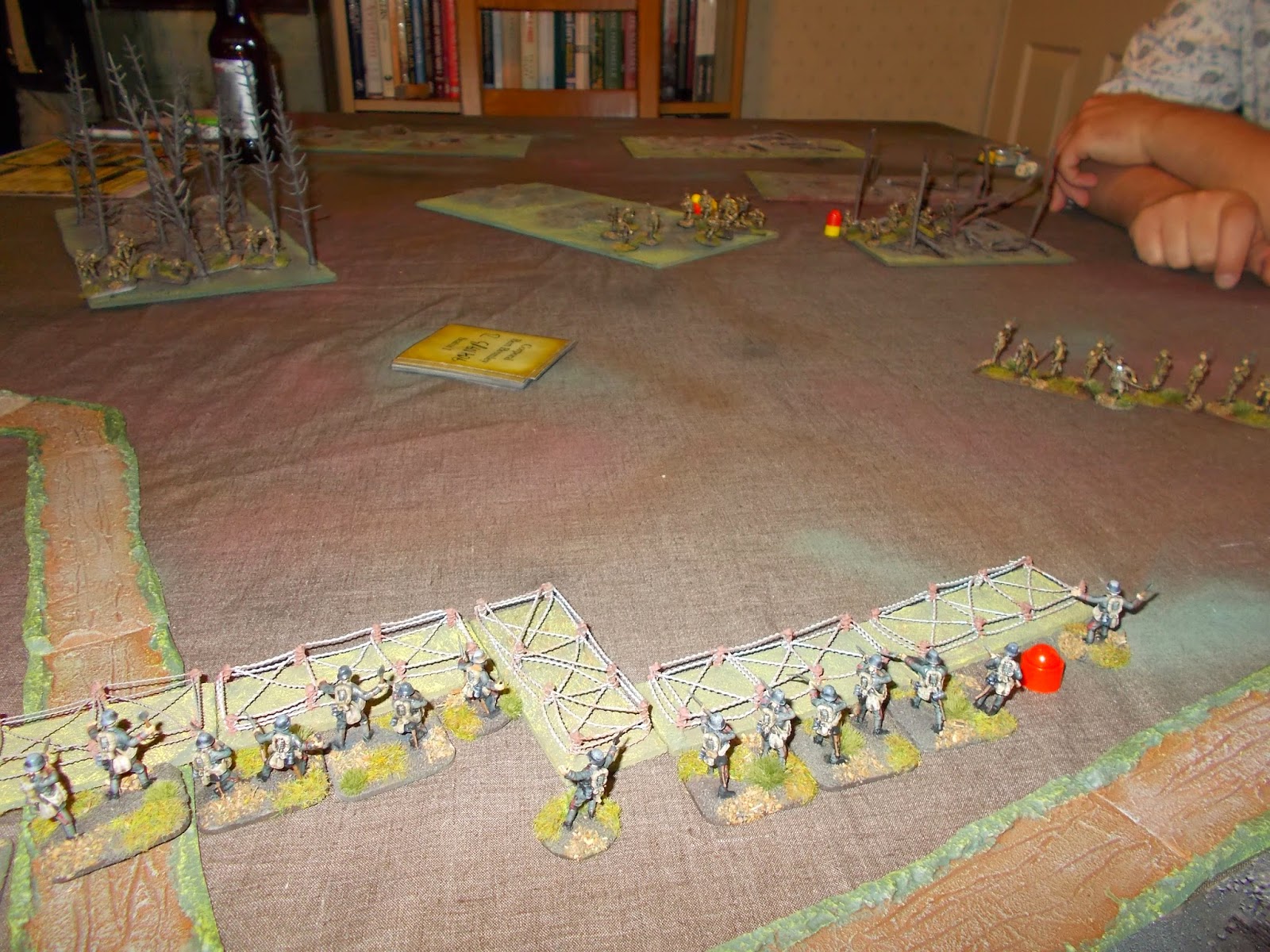 I laid down heavy fire on the Lewis position and was rewarded with plenty of shock points (the yellow tabs). It turns out we had been misreading the rules and this unit should have retreated a long time ago... 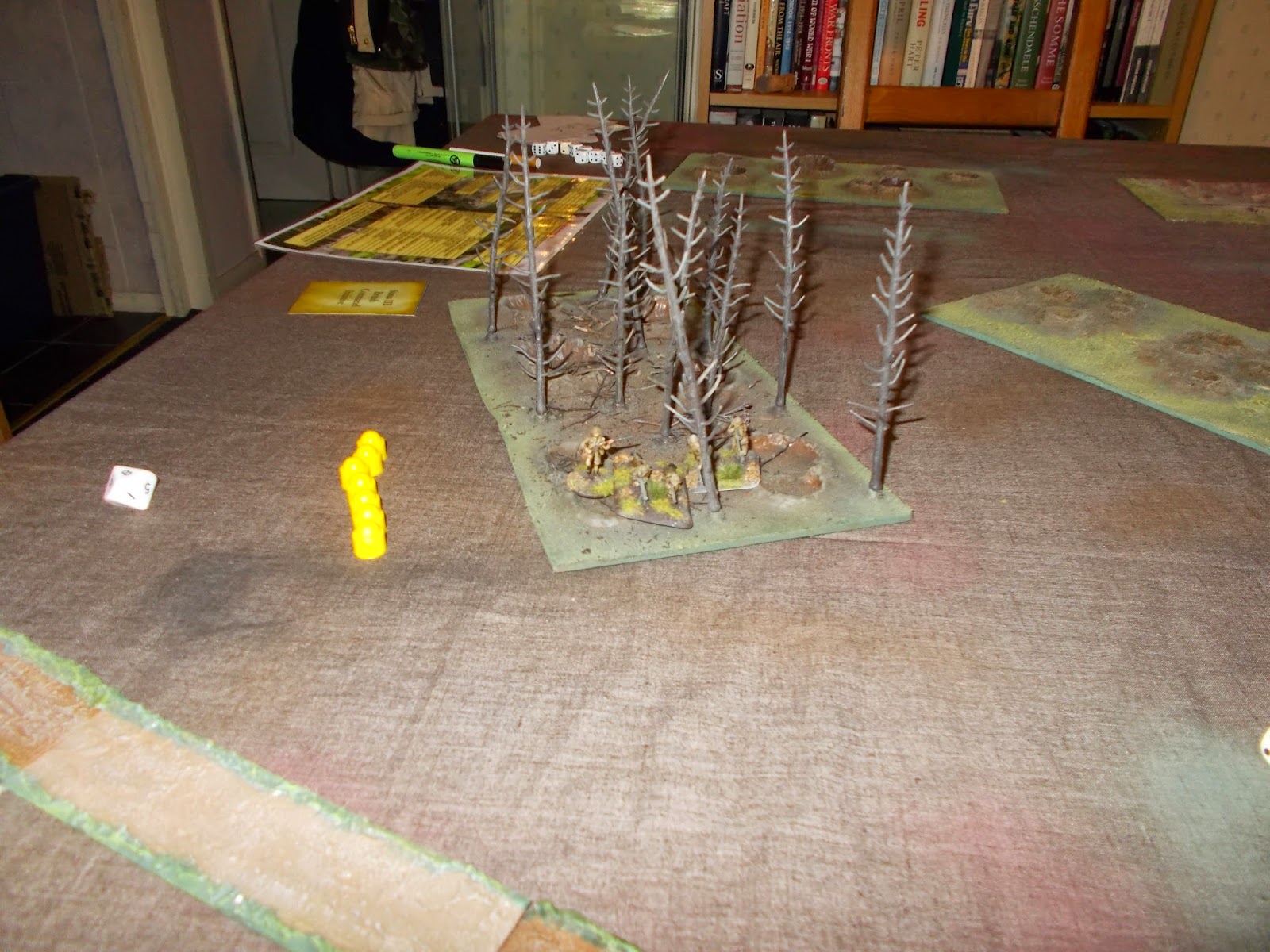 However, I was taking heavy casualties from a combination of rifle grenades, Mills bombs and rifle fire. My right hand section melted away to one man, even the Big Man in charge was killed! 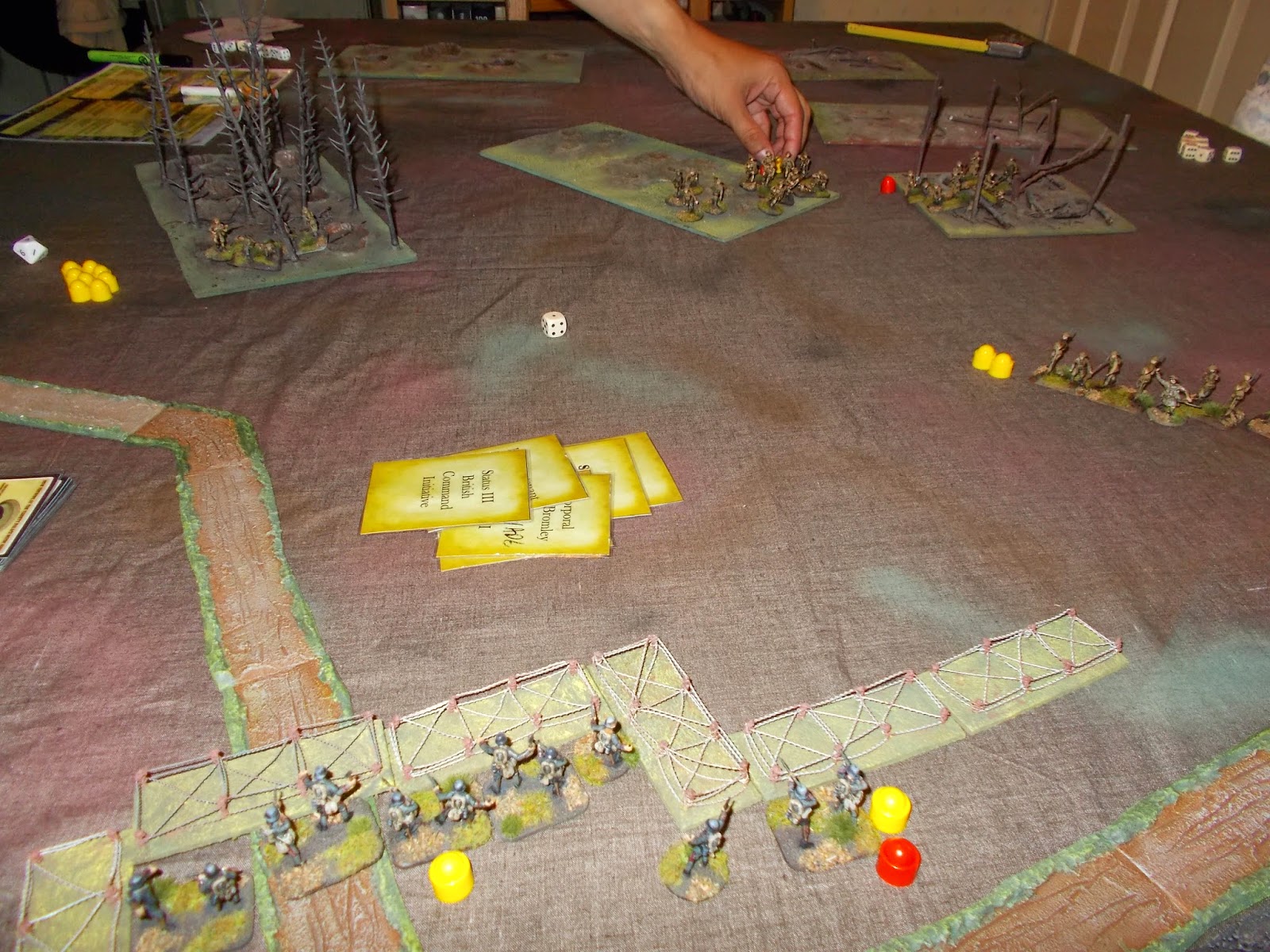 Using the 'Up and At Them' card the Bombers ran to close with the German trenches, whilst more shock was being caused by rifle grenades! 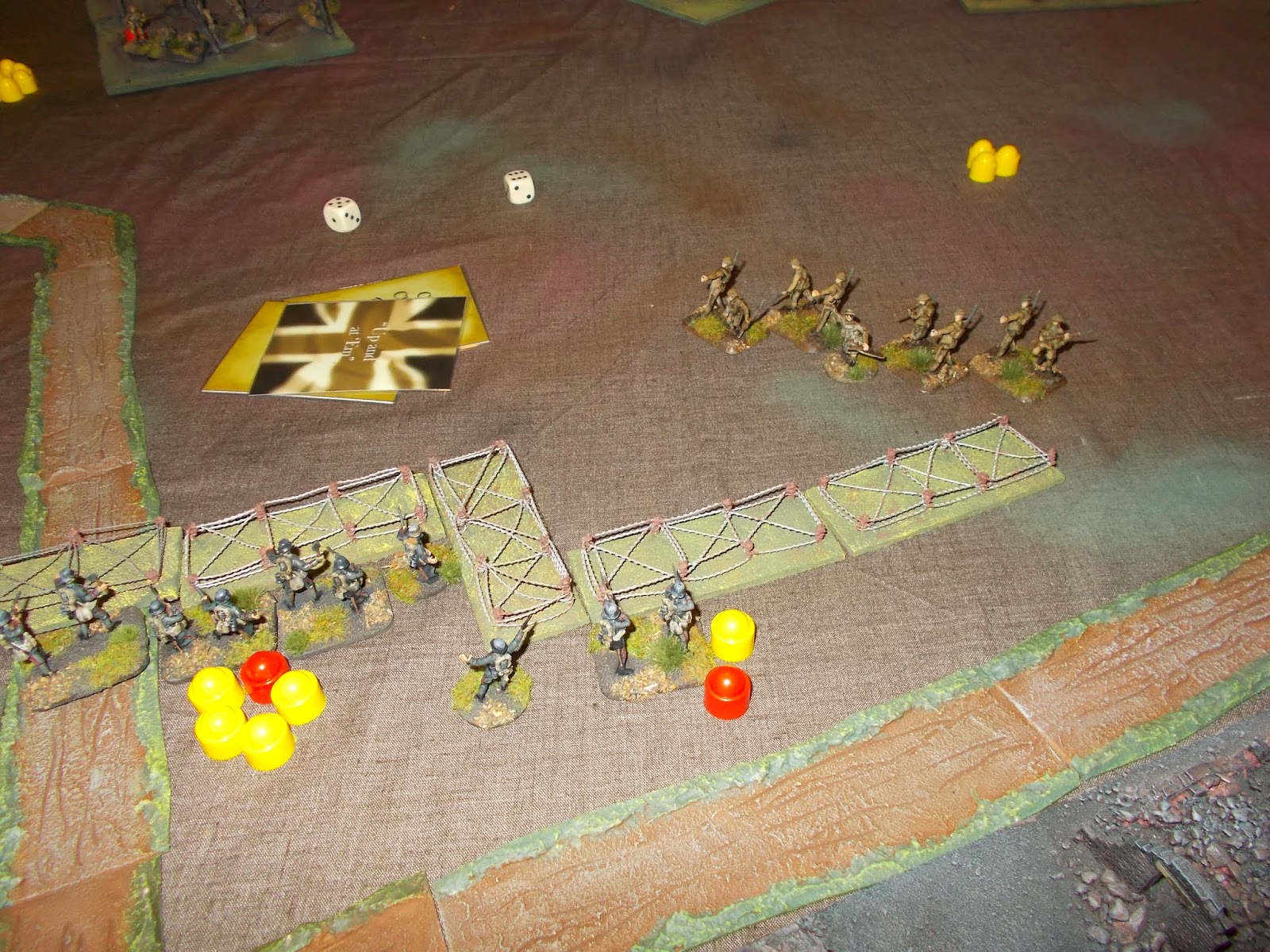 The British HQ moved towards the Lewis gunner to try and reduce some of the shock, even with the heavy rifle fire still coming their way. 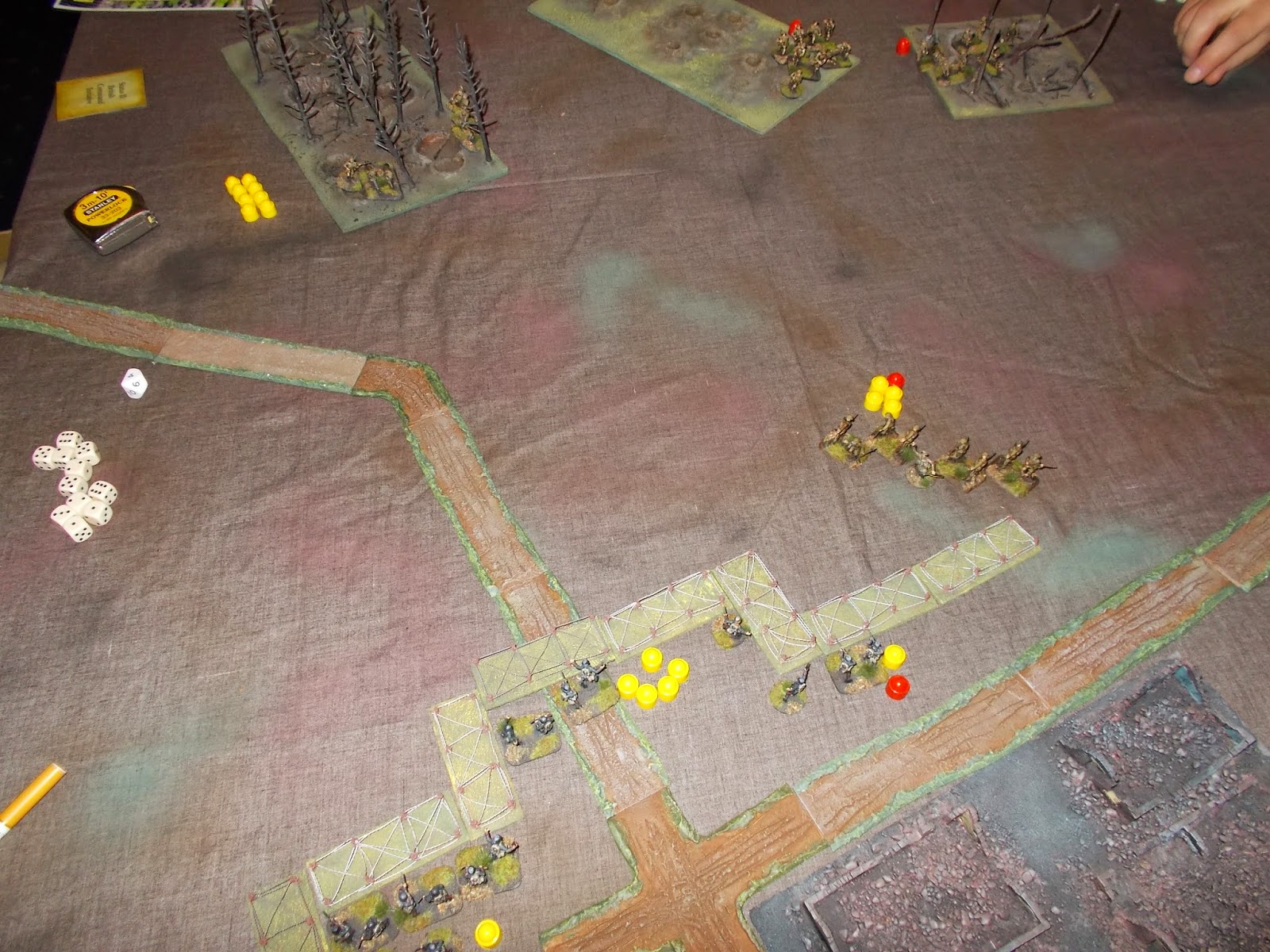 More Mills bombs, rifle fire and rifle grenades cleared out most of the trenches, so I called it a day. There was little point in going on as it was just becoming a grinding match at this stage. 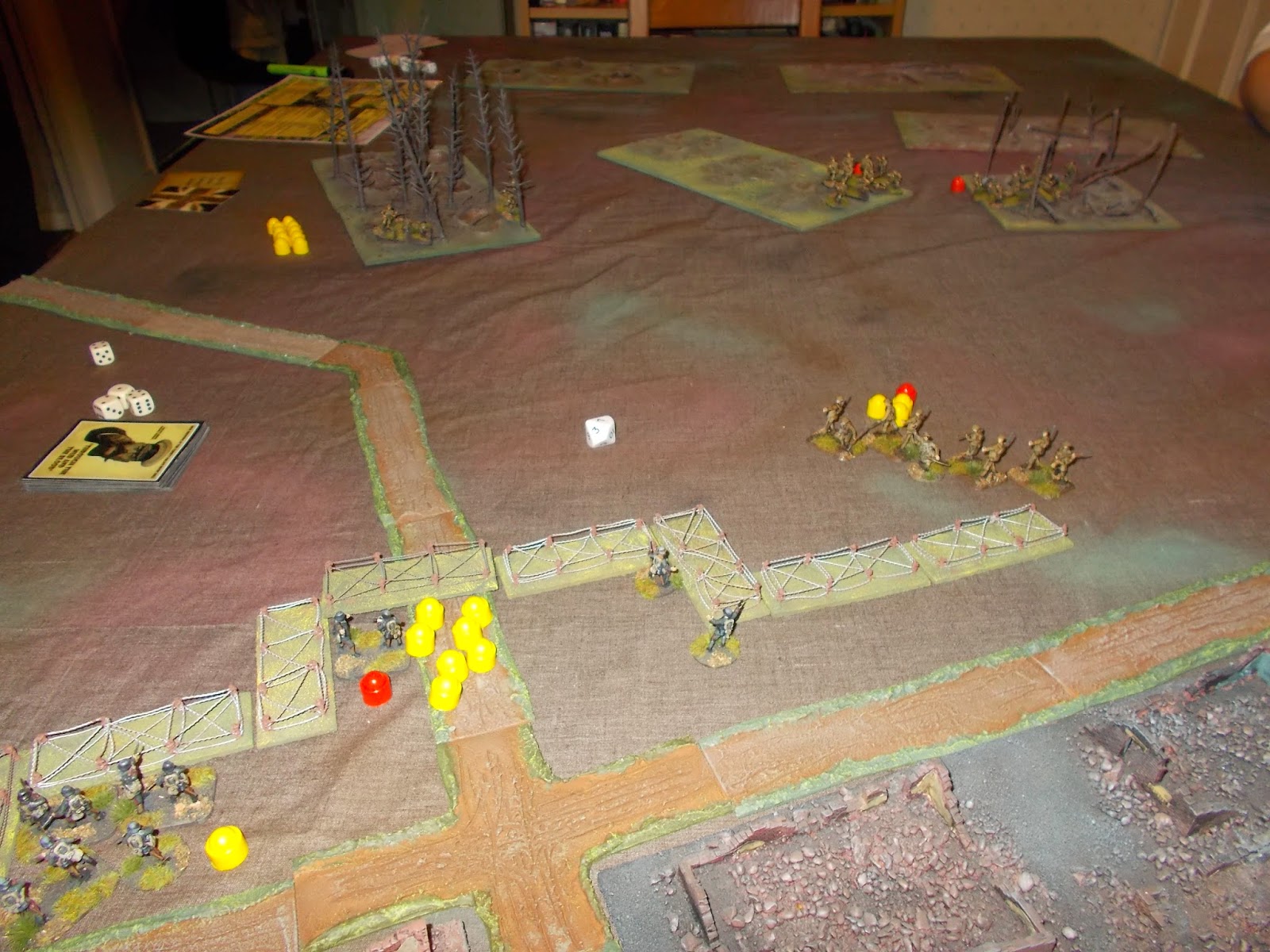 I knew it would be a hard battle to face if the British units were co-ordinated properly, just like in the 1917 training publication 'SS 143, Instructions for the Training of Platoons for Offensive Action'. This split the platoon into four distinct sections, each with their own job when attacking a fixed position. The Lewis and Rifle Grenadiers would suppress and bombard the target whilst the other sections, rifle and bombers moved in to deliver the coup de grace. SS143 is the basis for all modern small unit tactical doctrine in the modern British army and as this game proved, when used correctly, can be devastating against a strong position.

So, the first game of Through the Mud and the Blood played, what did I think of it? Well, I liked it; the game picked up as more units were revealed and added to the card deck and operating units in co-operation with one another is certainly rewarded. There were bits and pieces I kept forgetting, but that was my fault rather than the rules and they seem like they are reasonably easy to hold in the head during games. More practise is needed though!
Labels: 1/72nd 20mm AAR British Germans Infantry Through the Mud and the Blood WW1