On Saturday, whilst the wargaming world concentrated on the beach landings in Normandy, Ninjasaurus Rex, Dean and I were set to play the fifth battle of the ongoing Malaya campaign.

The New Year of 1941/2 in Malaya was brought in with the four day Battle of Kampar, another holding defence conducted by the beleaguered British forces and was the next major holding line after the Battle of Gurun, two weeks previously. This game was set to last for the first three days of the battle, from the 30th of December up to the 1st of January, we decided that each day would be eight turns long with Japanese reinforcements arriving at set intervals (see below), so the Japanese had to break through the British lines by turn 24. Conversely, the British had to stop this from happening. 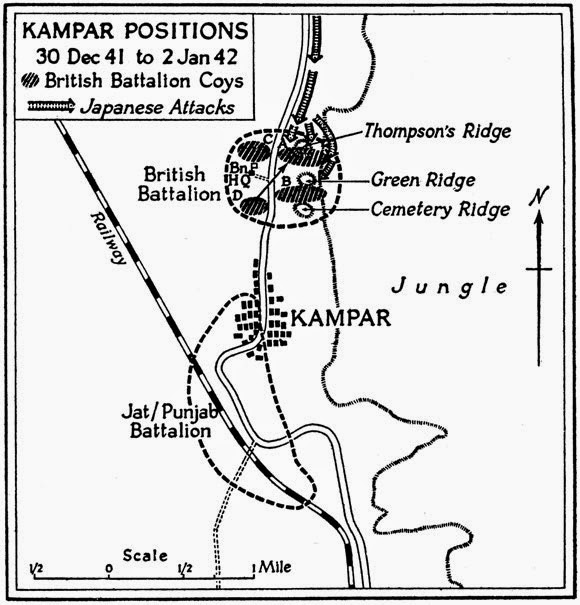 The ground was open at Kampar compared to the previous jungle positions and was a bit better suited for defence, giving large fields of fire. In desperation, the survivors of Jitra and Gurun, the 1st Leicester and 2nd East Surrey regiments were amalgamated into one large size battalion, called the British Battalion. However, they were left with few mortars and light machine guns, but were dug in on the area of high ground just north of Kampar. Support came from the Punjab Battalion based in Kampar itself, similar to the British Battalion this unit was an amalgamation of some of the Indian units that had also been mauled in previous battles.

The British forces consisted of:

The Japanese on the other hand, were still fresh from recent victories, a battalion from the 42nd Infantry Regiment led the attack, consisting of:

The battle would be fought over three days, with additional Japanese support of

Another battalion of the 42nd Infantry Regiment, as above, with 3 x HMG support.

This is how the board looked from the northern Japanese edge, the impassable jungle slopes of Bujong Meleka on the east funnelled the attack down the main road running north to south. 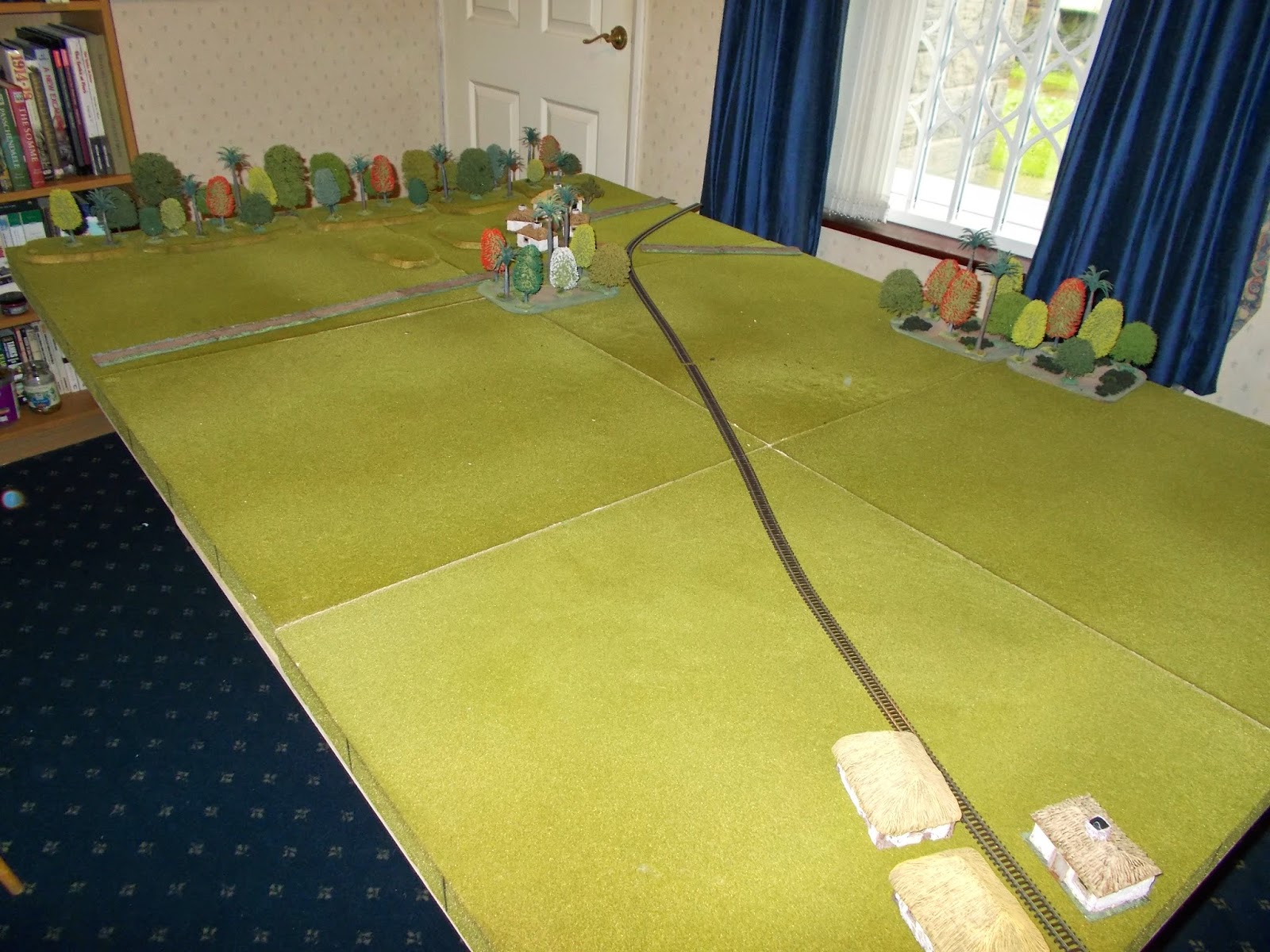 The British Battalion were dug in across the road and on the high ground of Thompson's Ridge, Green Ridge and Cemetery Ridge. The Japanese faced off against them clustered around the road. The Indians were placed in Kampar, I knew how hard it was from previous engagements to get defenders out of buildings. 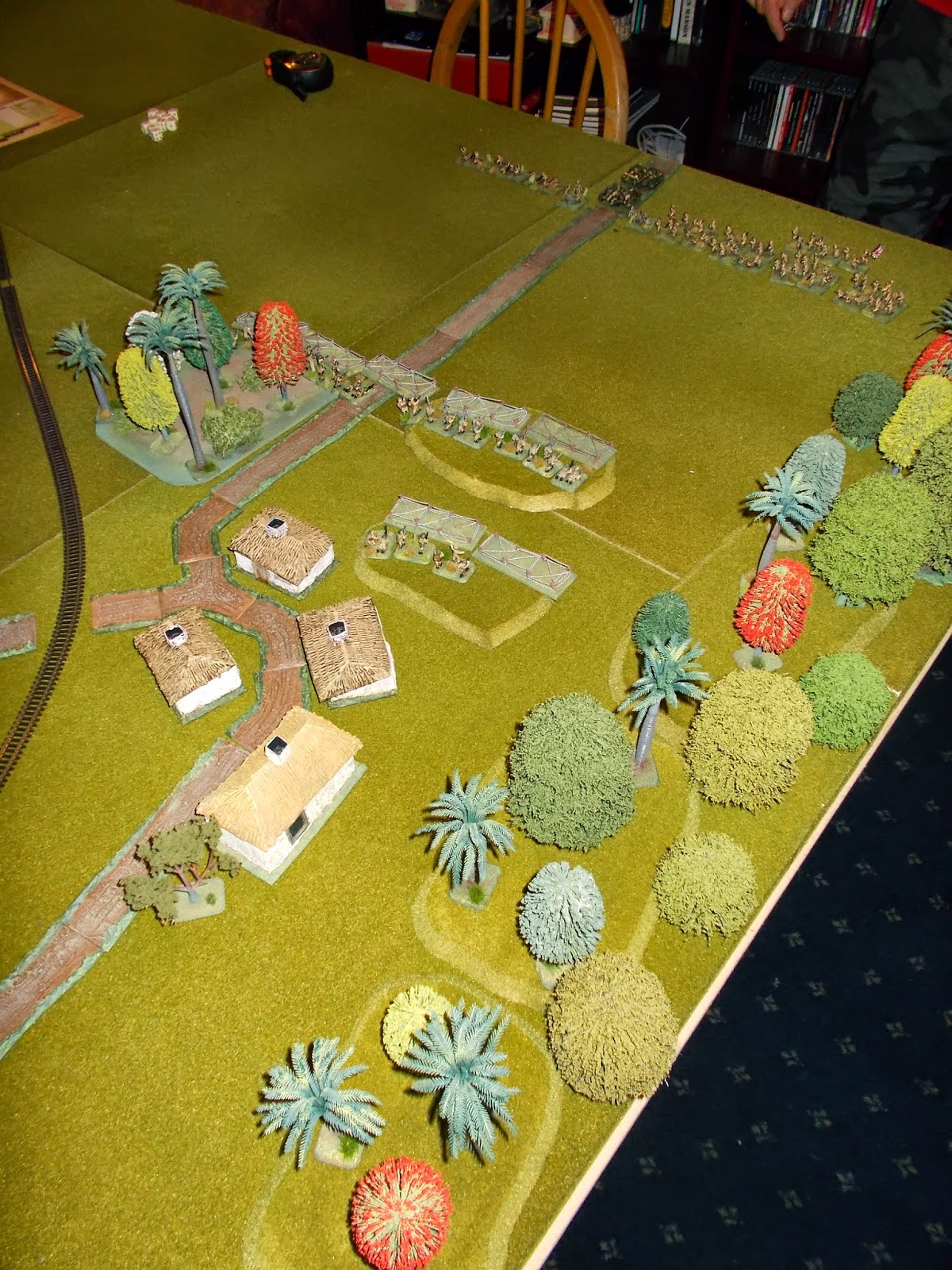 The opening shots went to the British Battalion who caused a few casualties amongst the advancing Japanese. 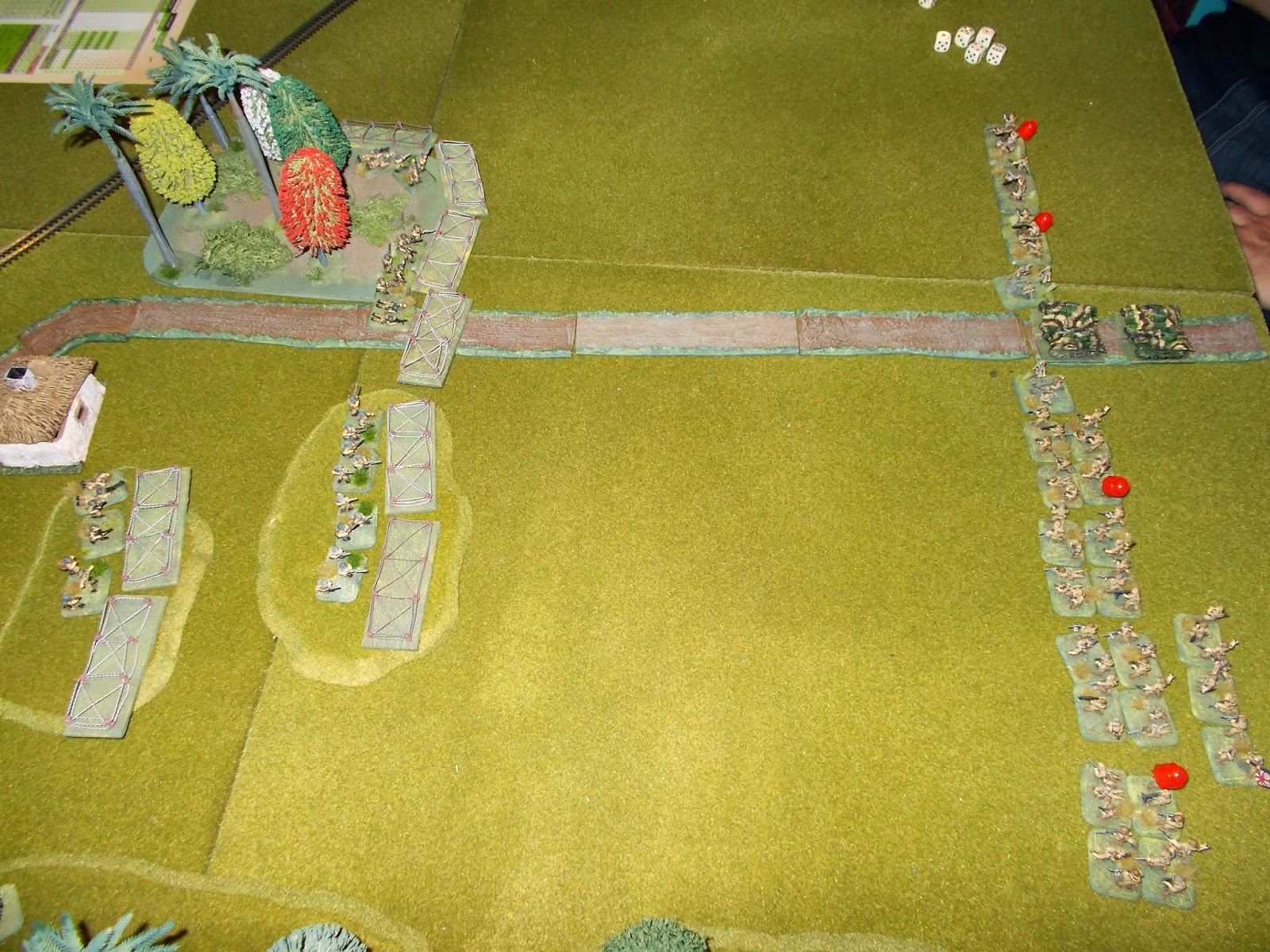 But their victory was short lived as Japanese mortar fire, artillery and rifles took their toll, smashing the defences on the high ground and forcing the men in the jungle to fall back into the safety of the trees. 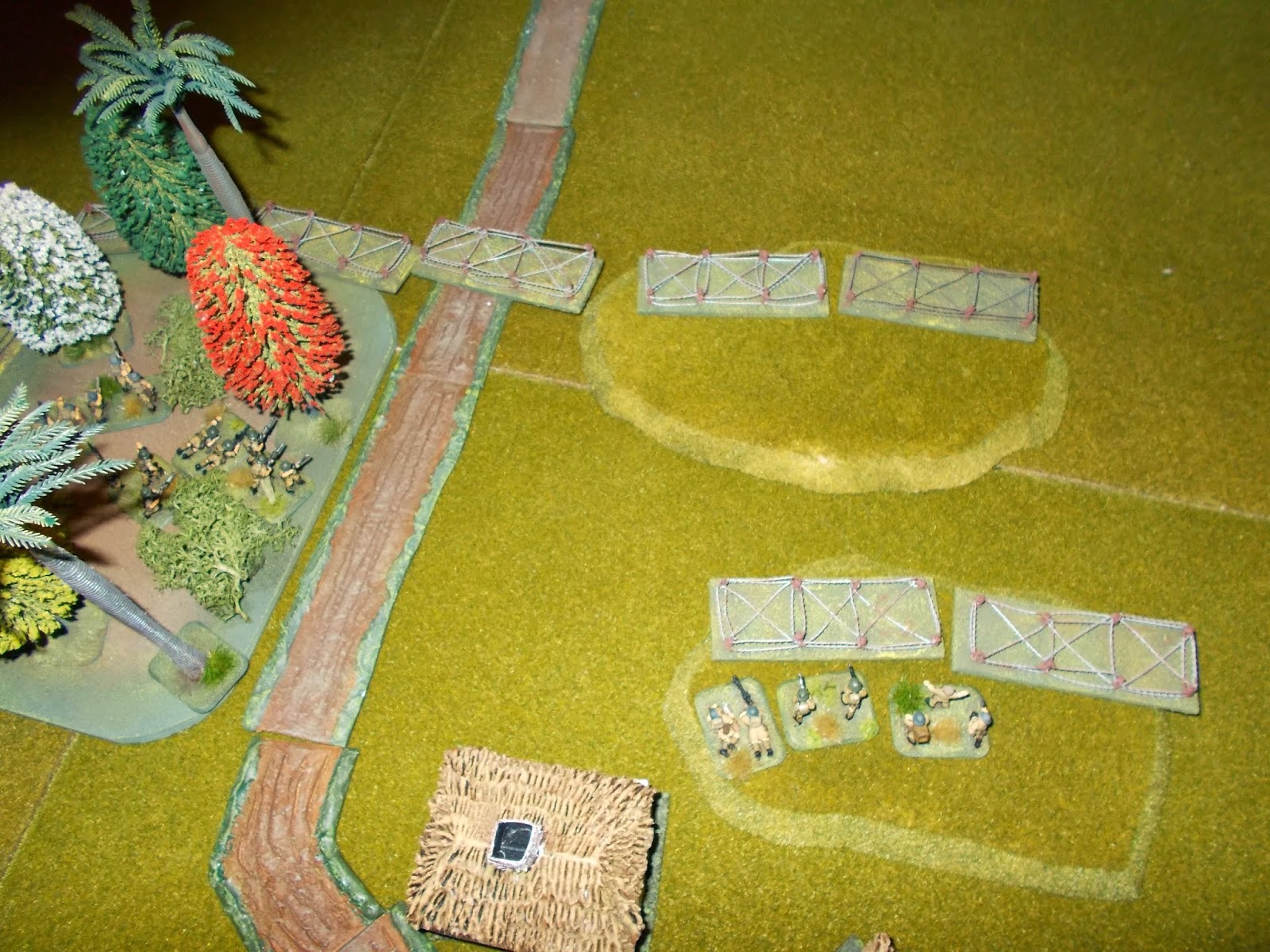 As Japanese shells also fell on Kampar itself, the battalion advanced against the now empty British positions, the tanks rolled their way down the road, threatening the men in the jungle. It looked like it was all over straight away! 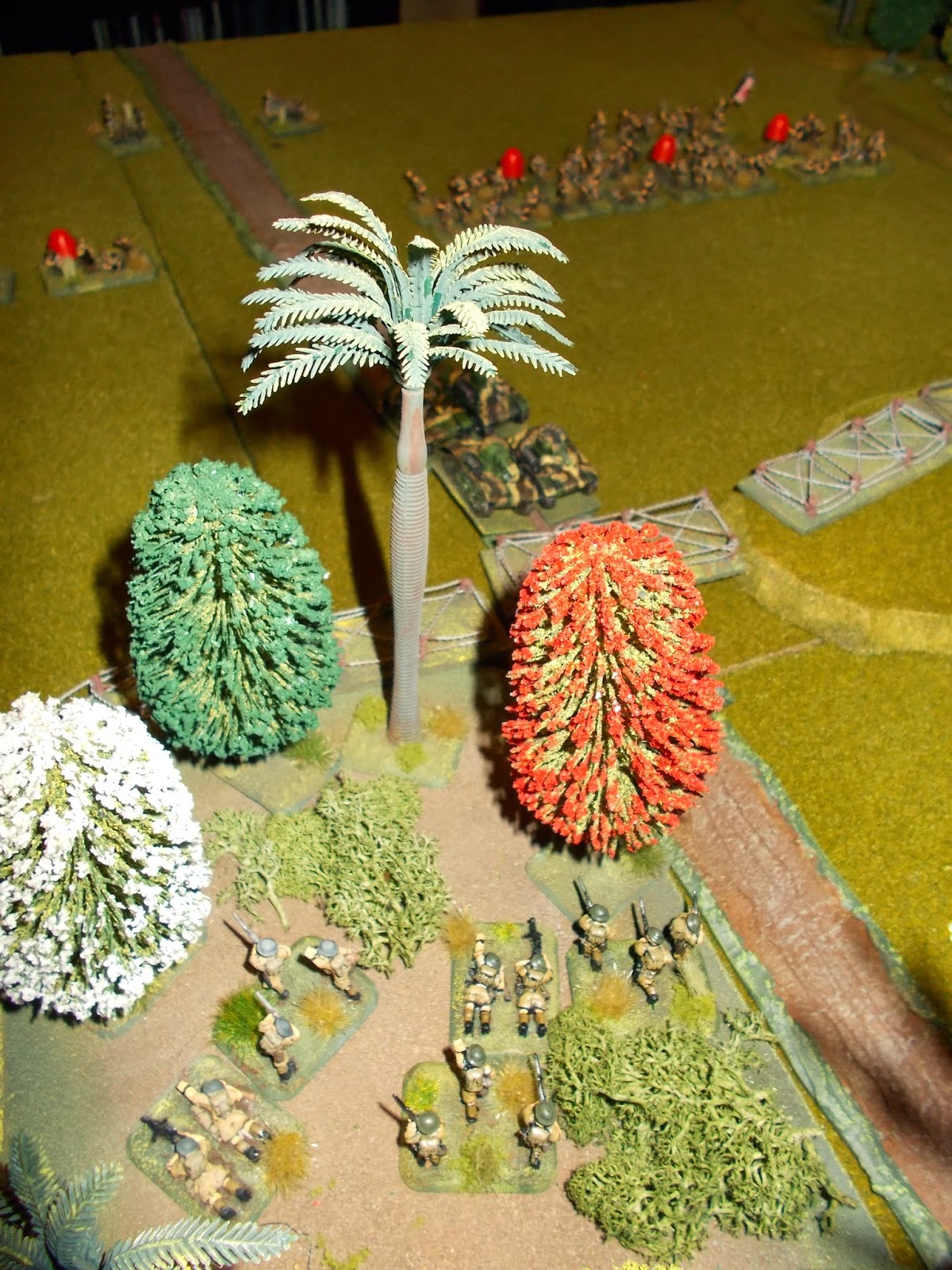 However, the British held tight and accurate anti-tank claimed one of the light tanks. 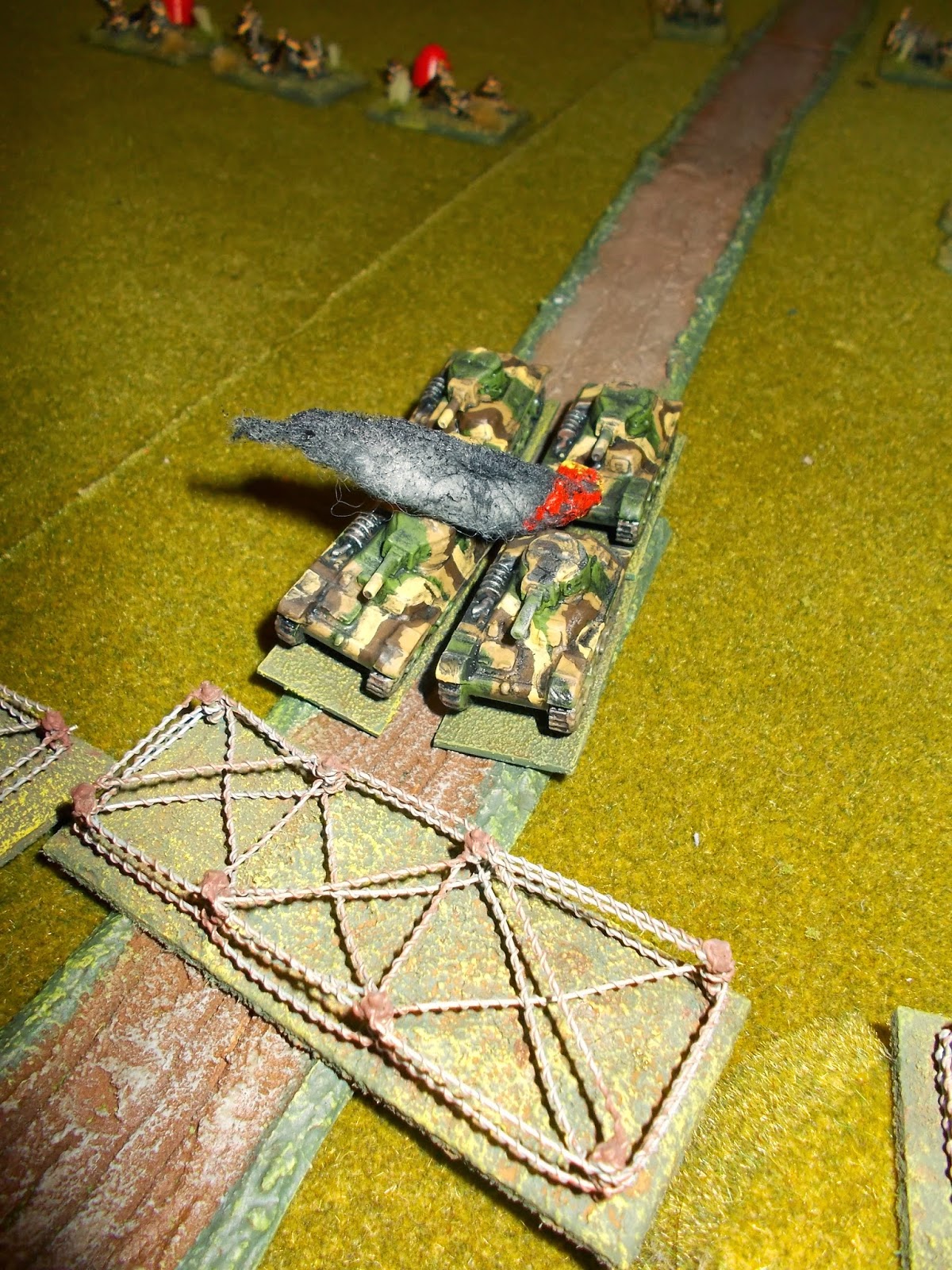 A bad morale result caused the tank attack to falter and gave the British another chance at firing. This time a Te-Ke was heavily damaged. 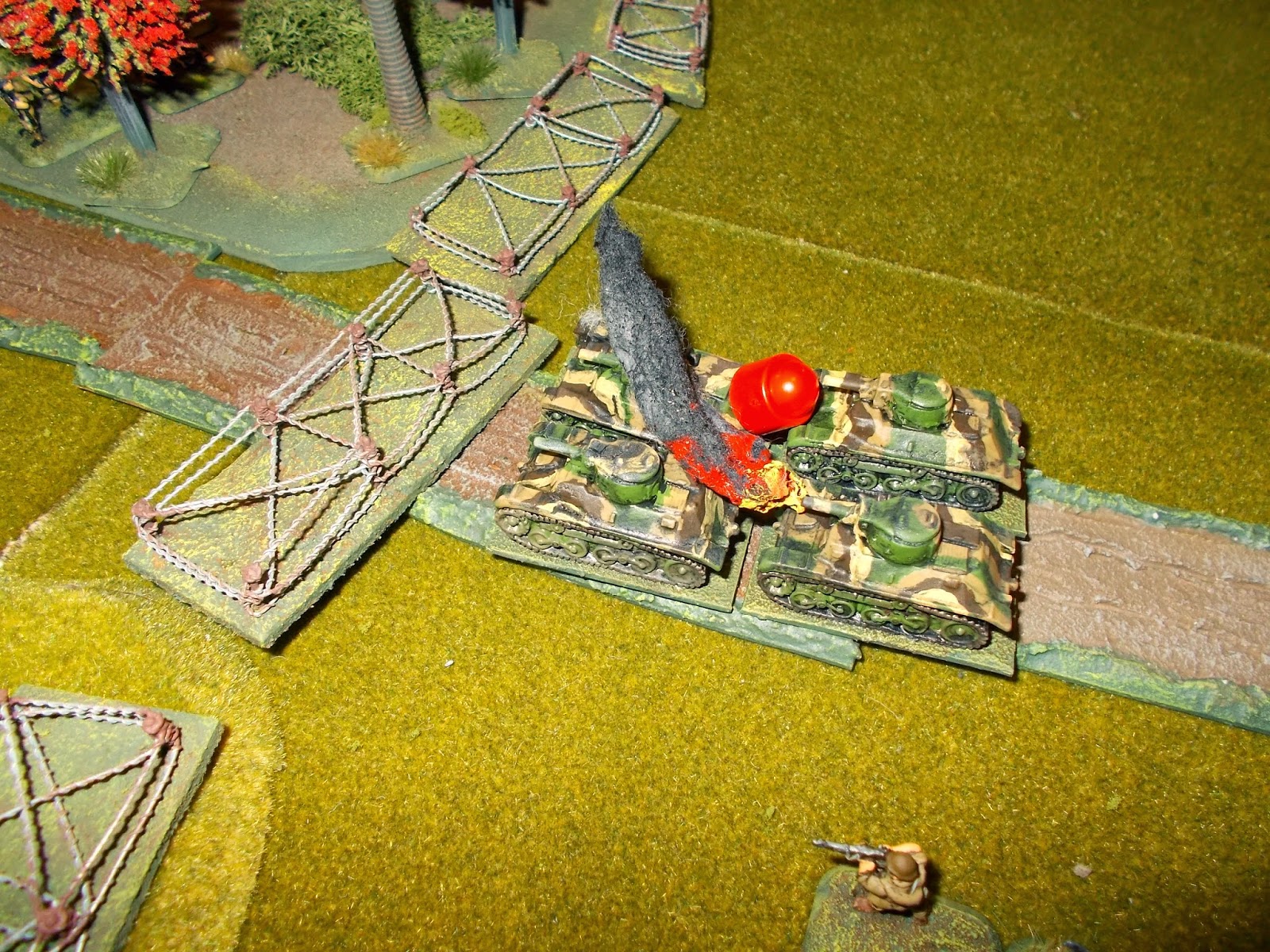 Unperturbed, the Japanese infantry surged over the top of the British trenches and captured the first ridges north of Kampar. 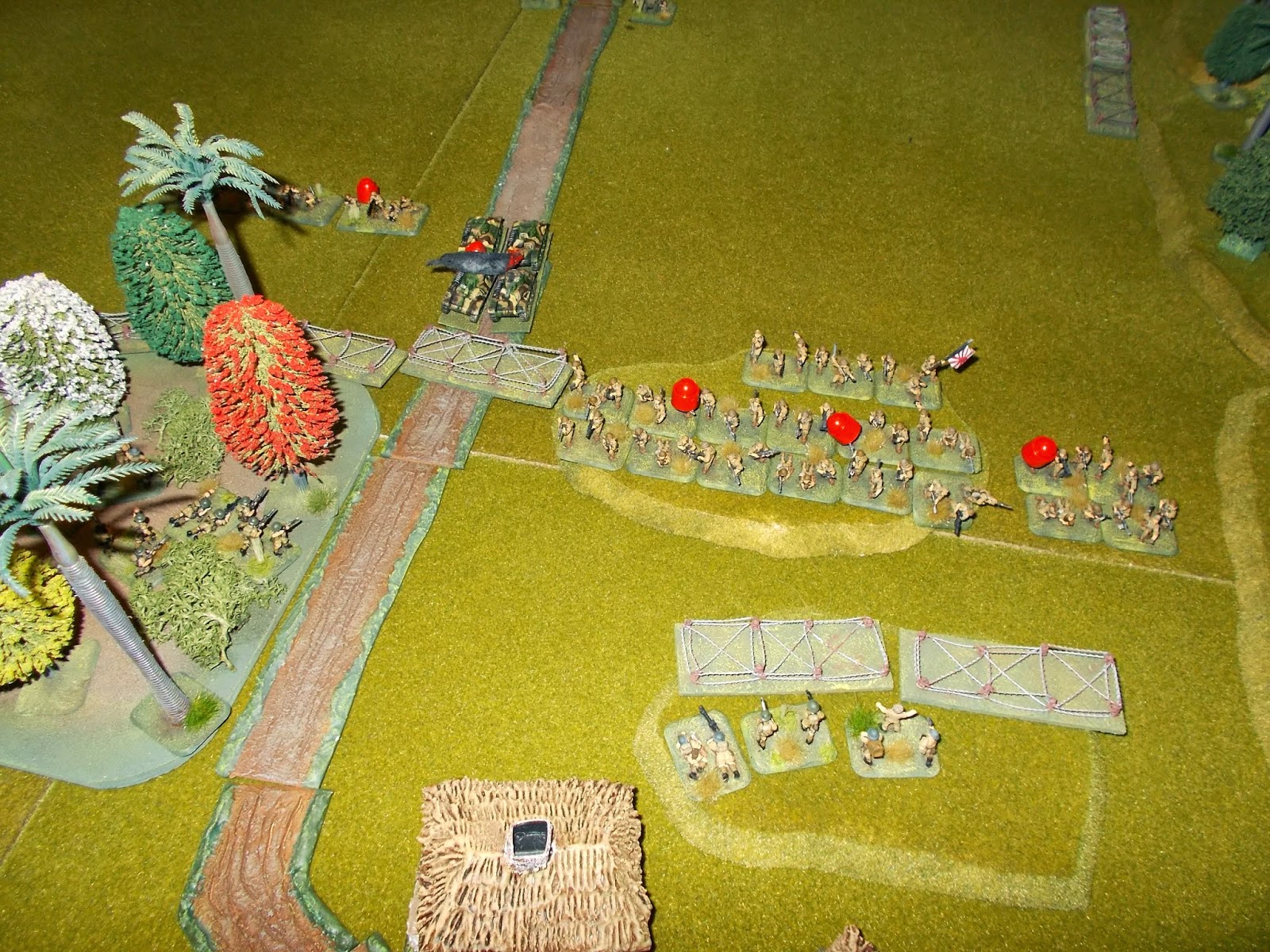 An exchange of rifle fire saw the British Battalion HQ decimated, it was starting to look incredibly bad from my side of the table! 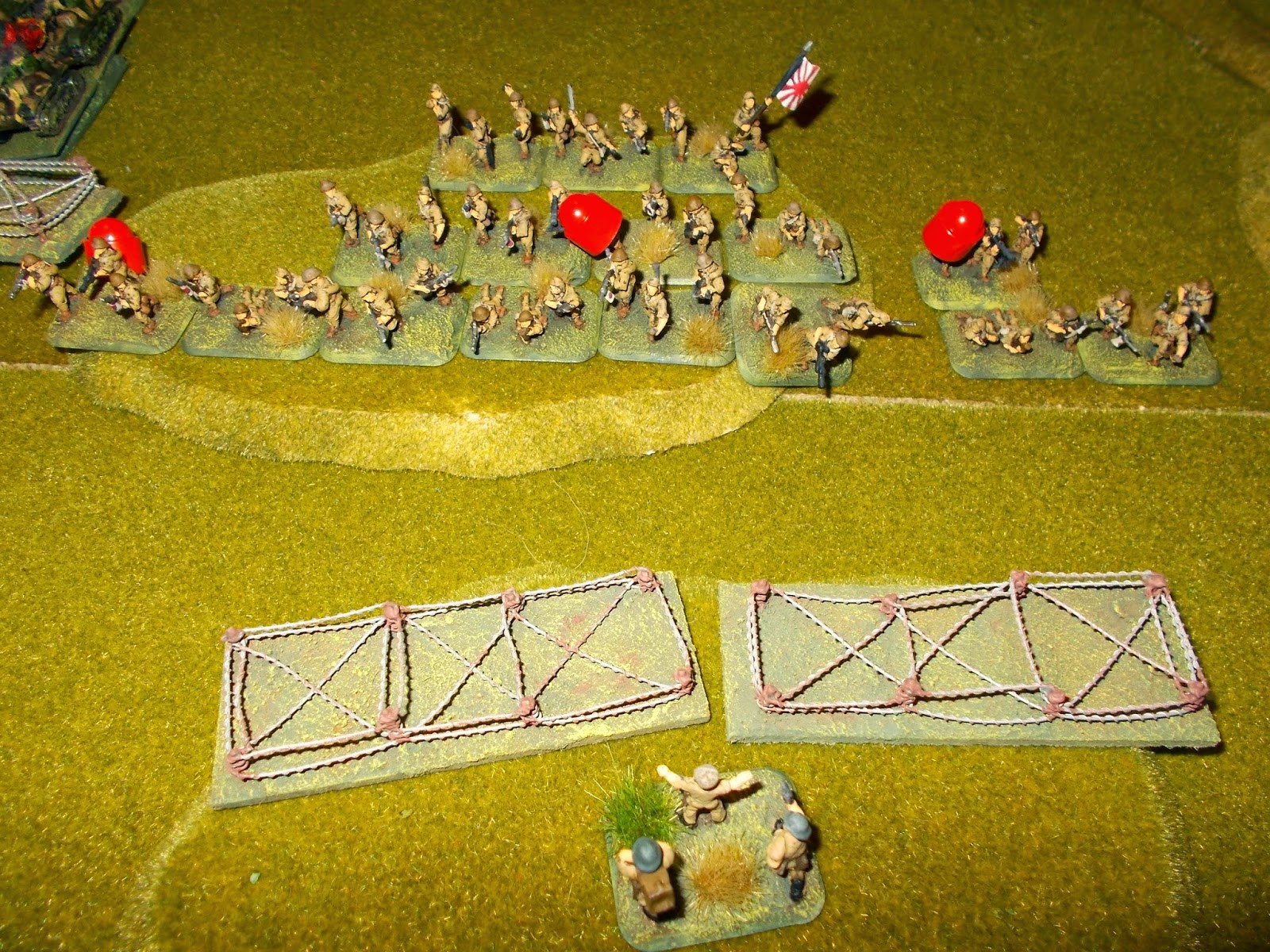 The Japanese were not having all their own way though. Dean declared that the attack on the jungle would be a 'sideshow' to the main event. The remainder of the British Battalion did all in their power to make sure that wasn't the case and their rifles caused many casualties amongst the Japanese HMGs. 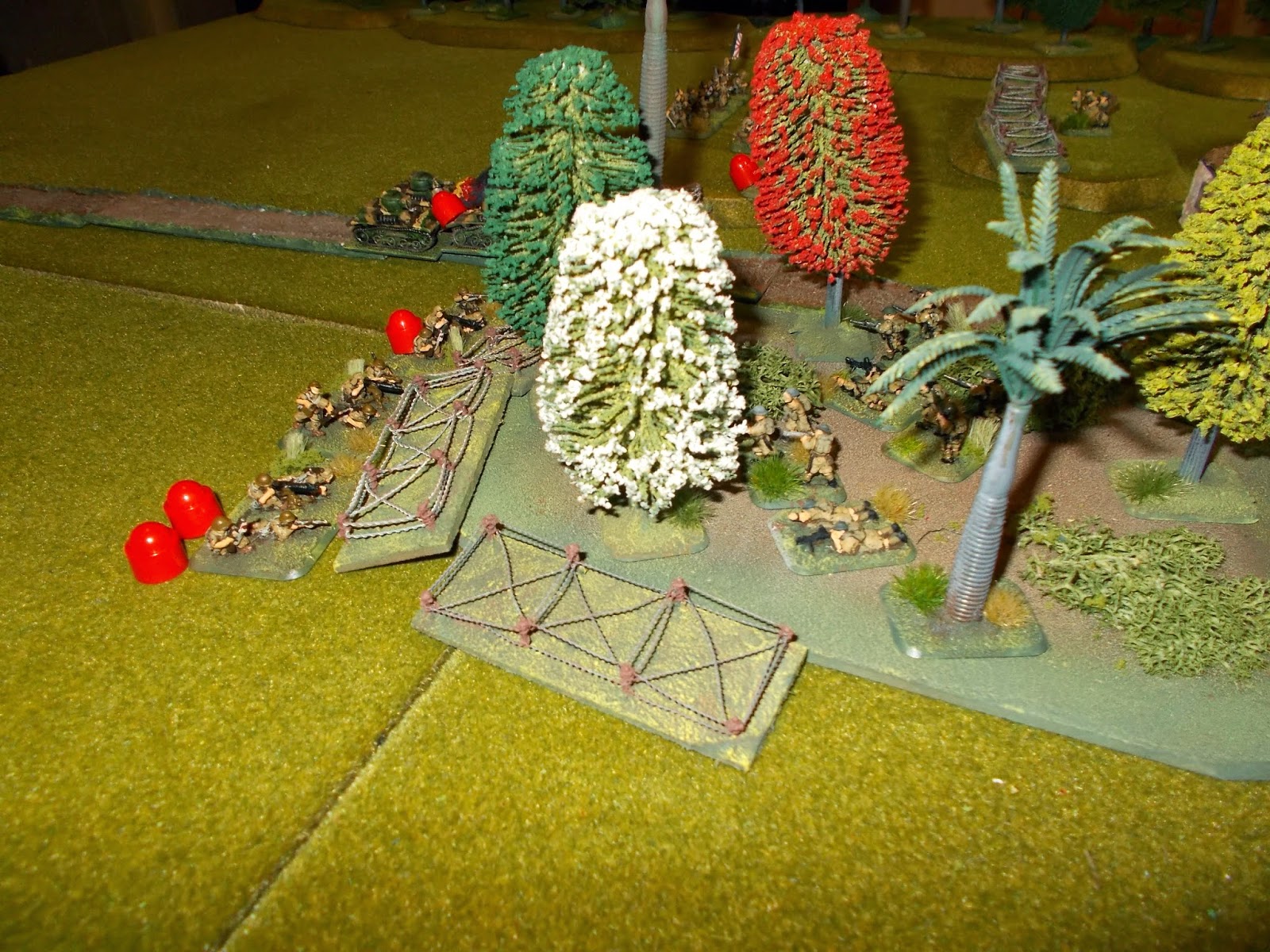 The remnants of the British Battalion HQ fell back into the safety of Kampar as the Japanese infantry passed over the second line of defences. 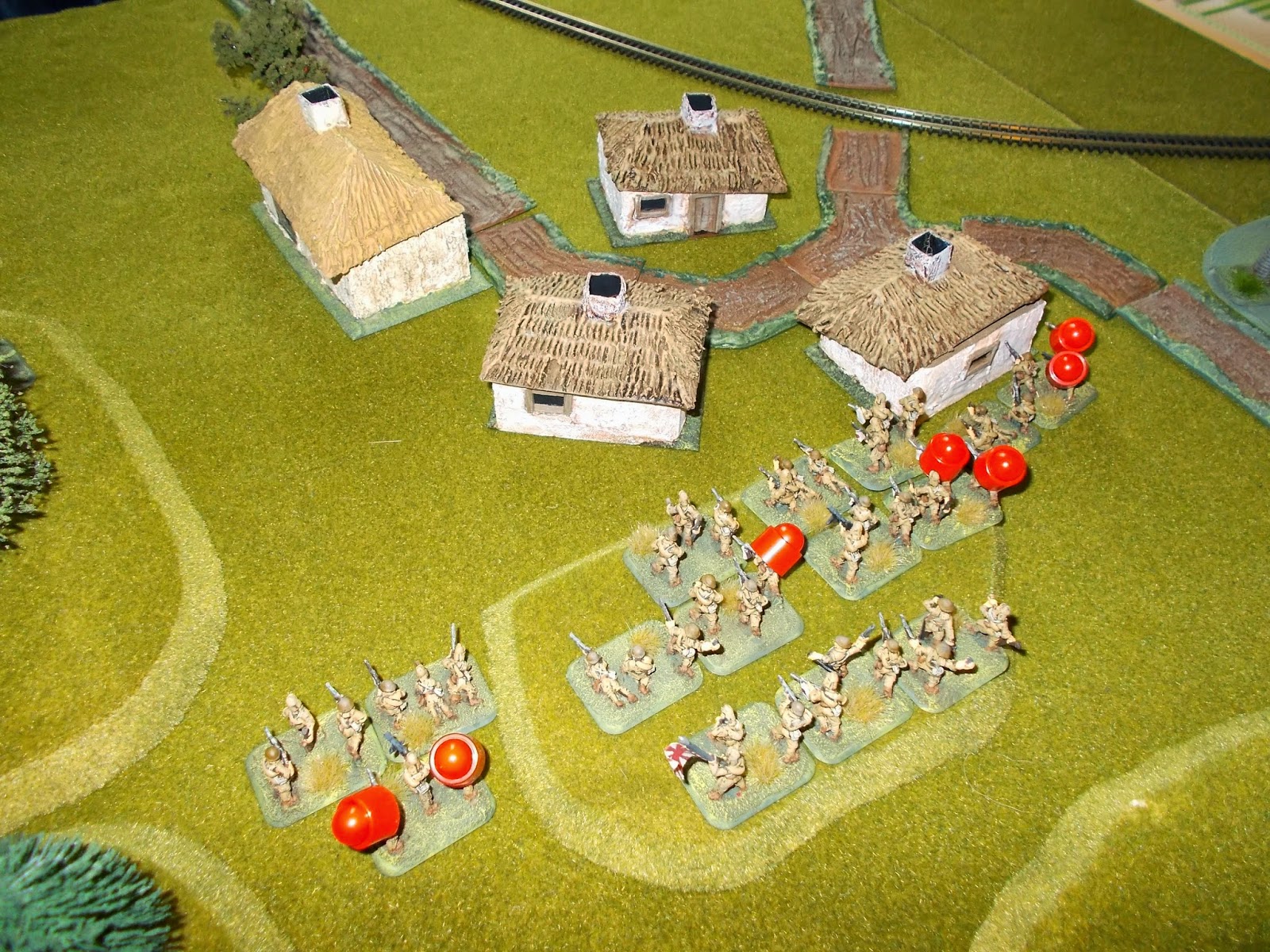 I thought that the best defence was attack and pushed the two infantry companies of the British Battalion back into their original positions, to take on the HMGs. 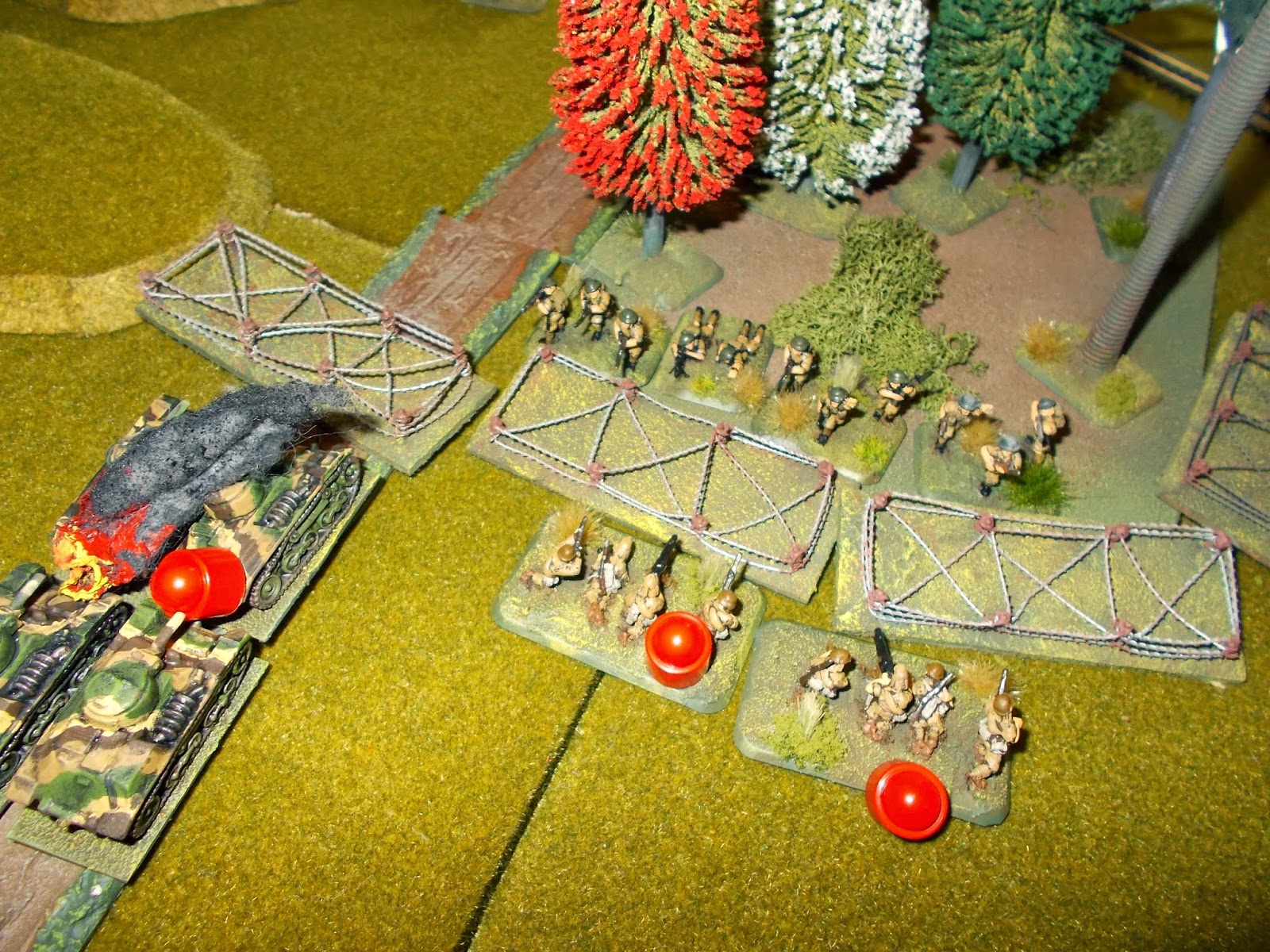 It certainly wasn't just a 'sideshow' as the British fire destroyed the HMGs. 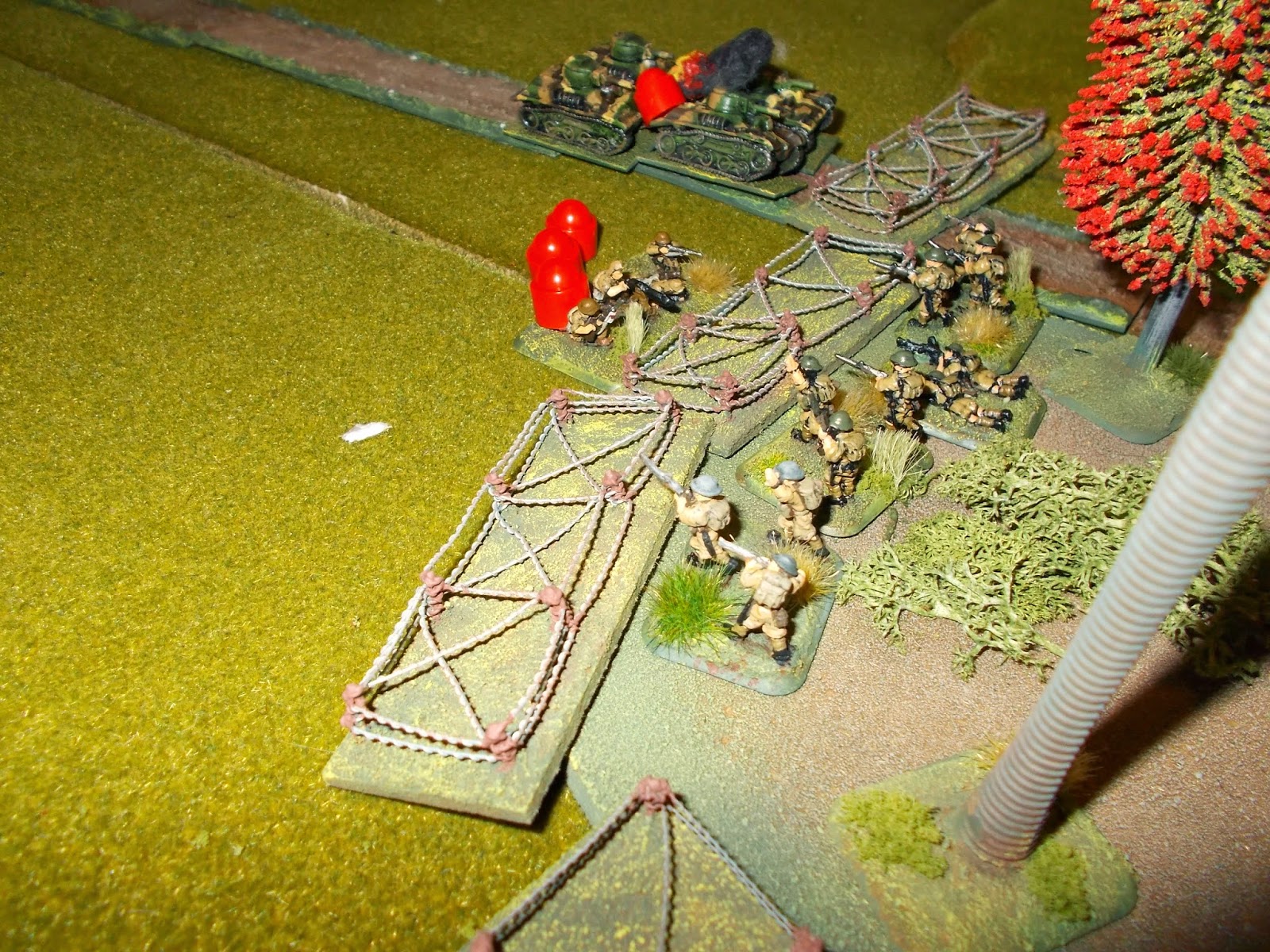 Meanwhile, the Japanese infantry stormed in against Kampar, ready to use grenades. The Indian defenders gave as good as they could and hammered the attackers as they came in. 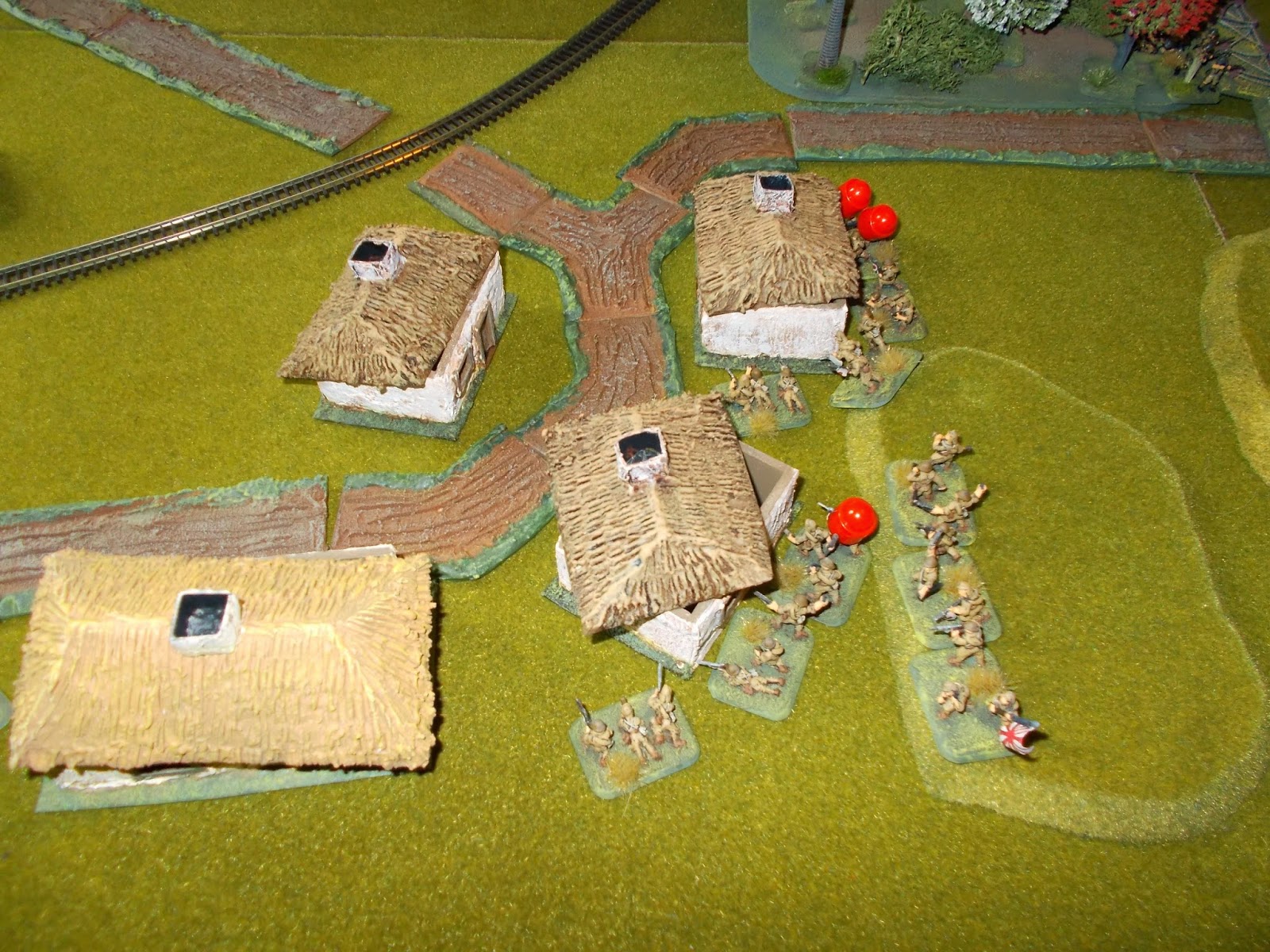 Japanese grenades quickly cleared one of the buildings and they moved towards the south of the town, but a tenacious Indian defence held them up on the east buildings. In the jungle the remains of the British Battalion were routed by tank fire and my defence there finally collapsed. 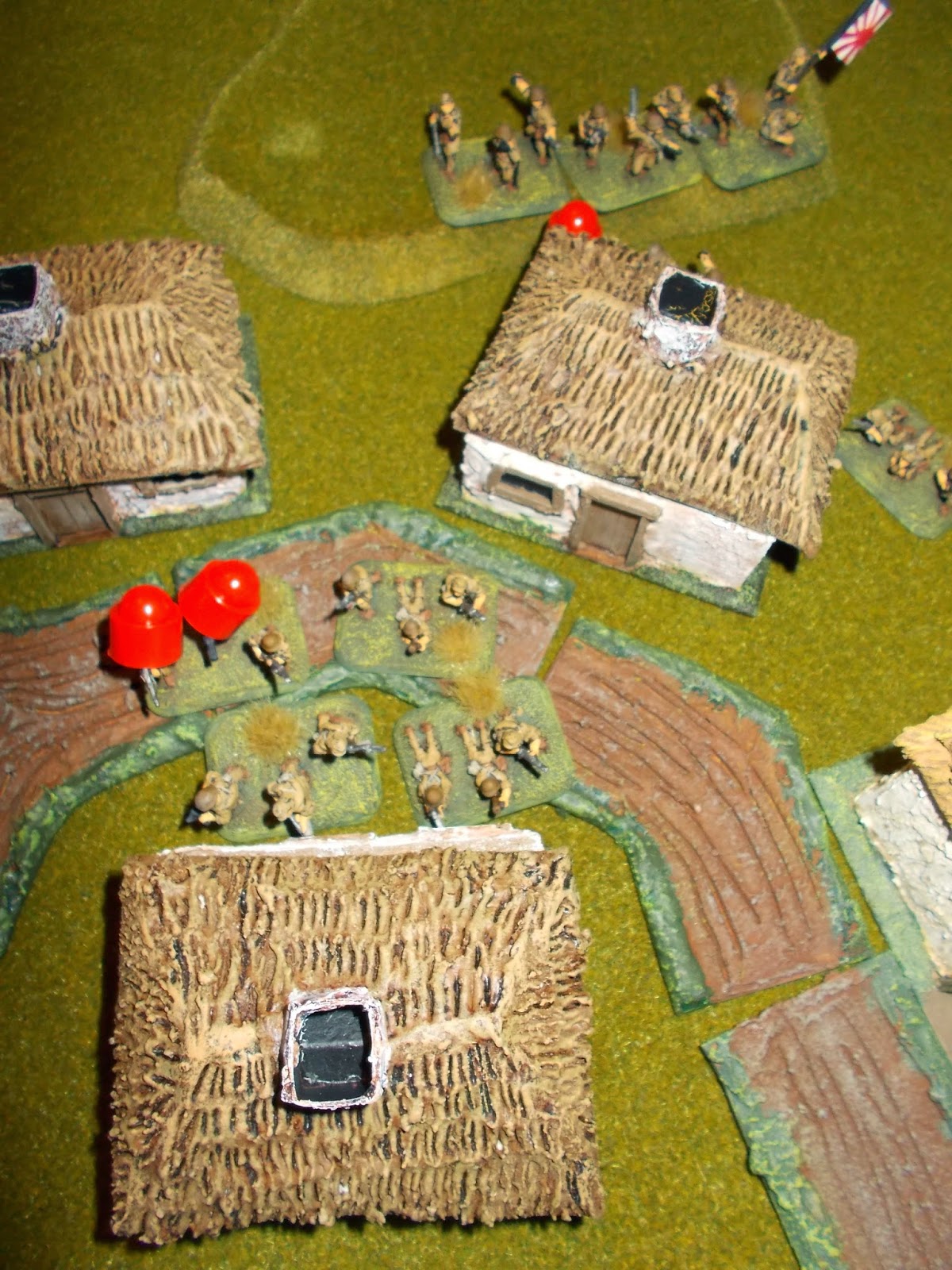 The inevitable happened and the defenders were mauled. Now the Japanese brought in their tanks as support for what they thought would be the final assaults. 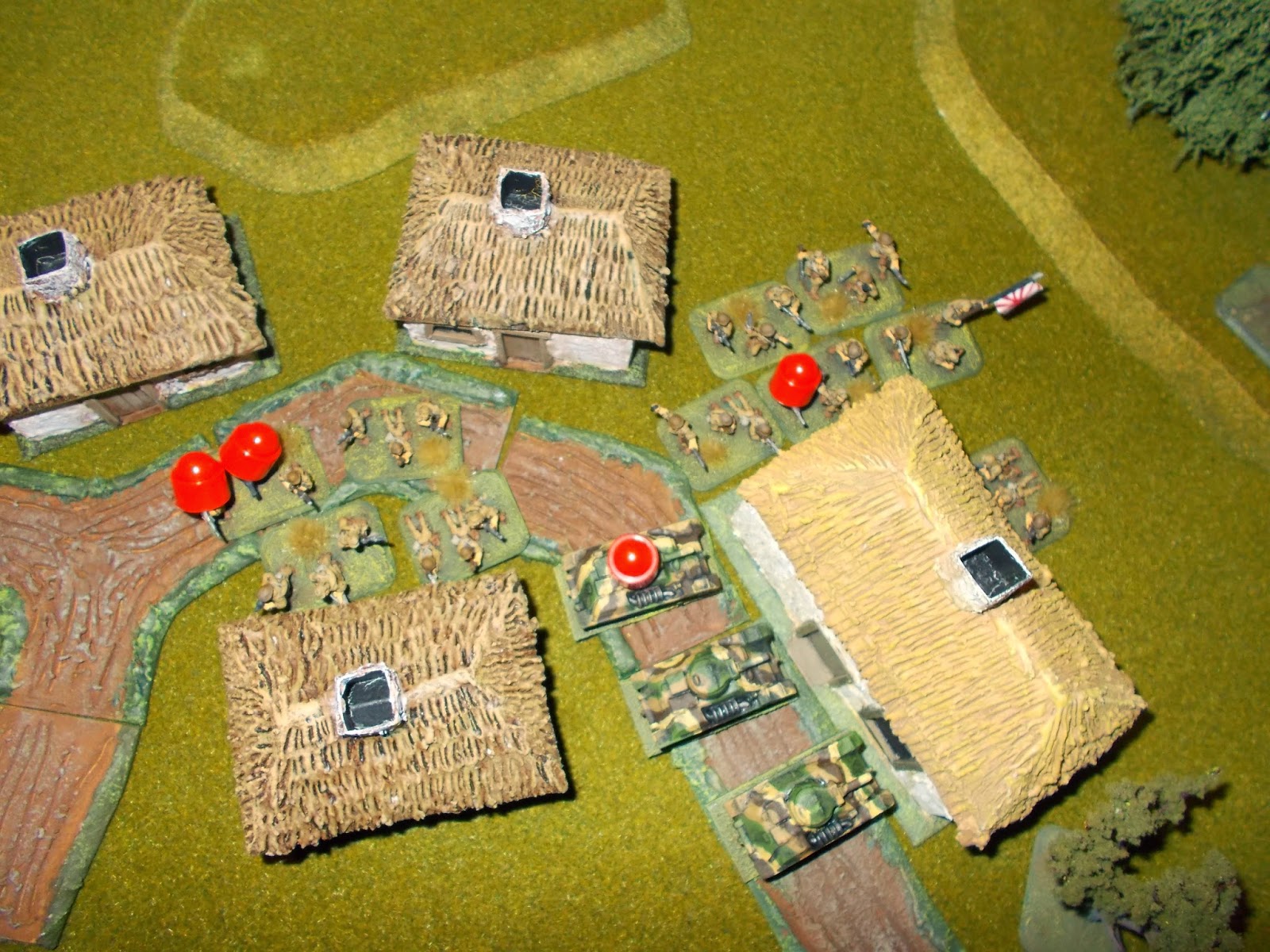 Fortune favoured the brave though and the Indians caused enough casualties to make the Japanese infantry retire to cover, back to the houses they had only just cleared of defenders. 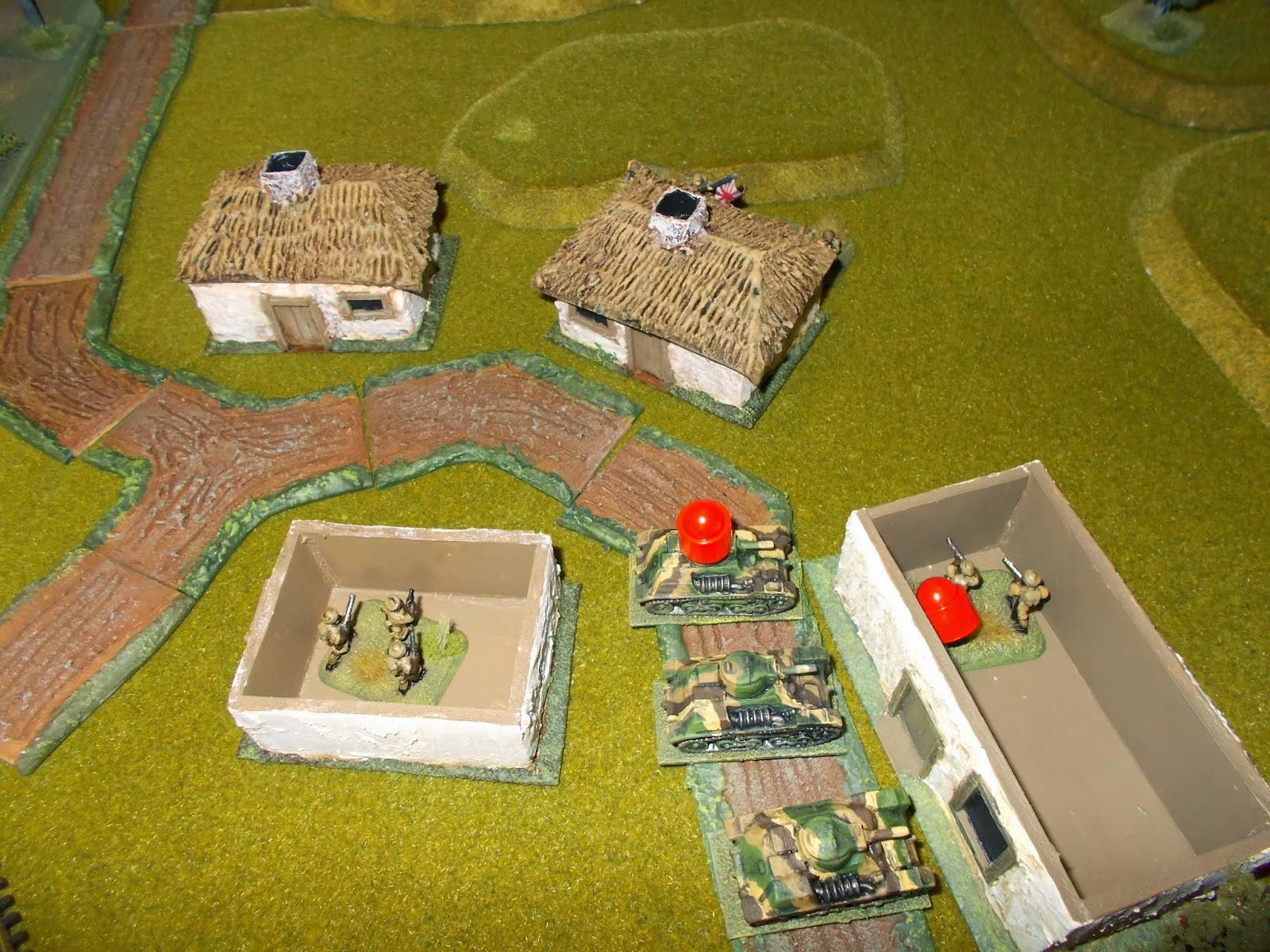 With no anti-tank capability to oppose them, the tanks poured fire into the remaining Indians and they were destroyed almost to a man. The last two survivors were routed from their positions and fled the field. 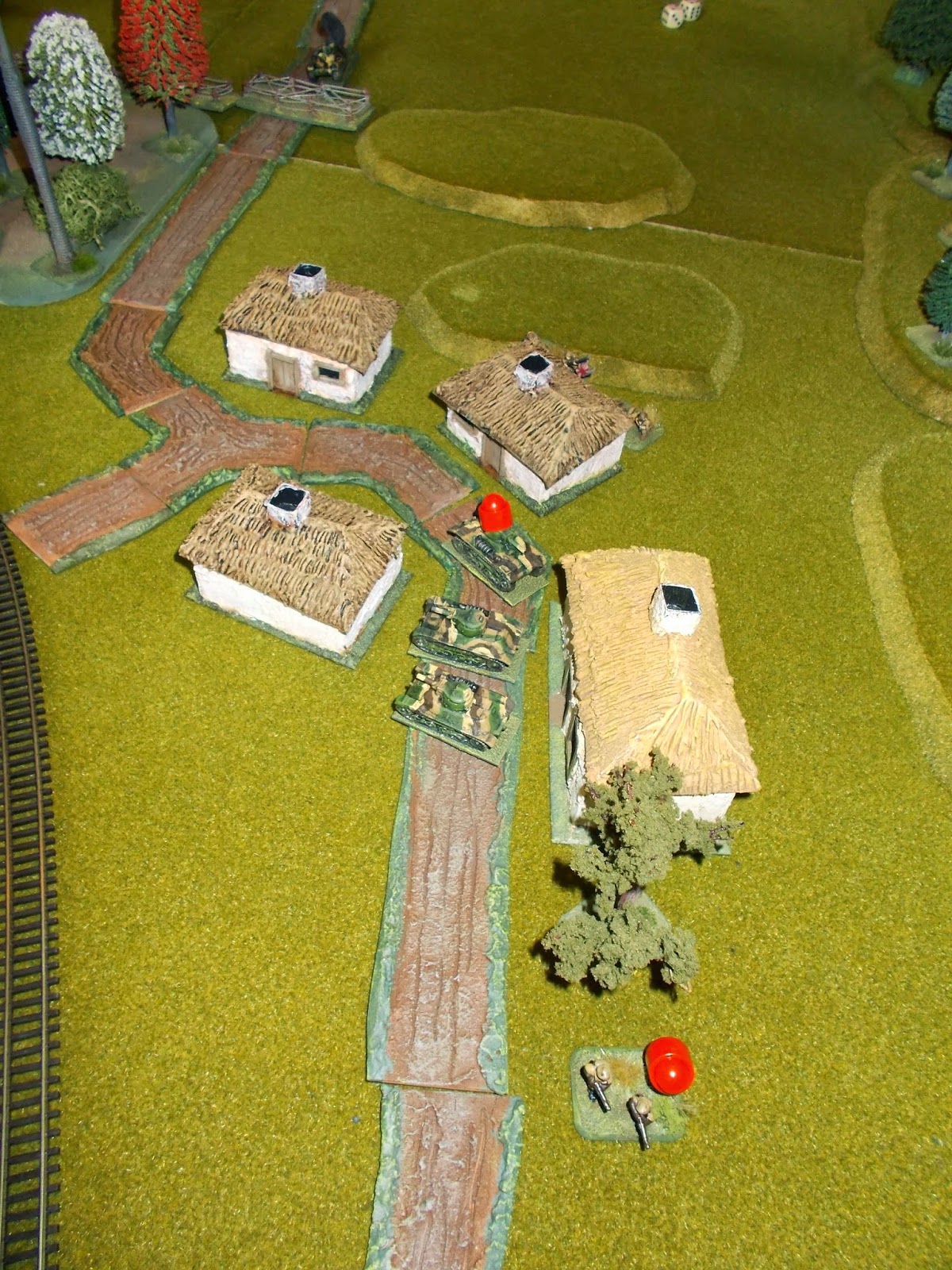 It was all over, we had just turned the clock to turn nine, which signified it was day-break on day two and the Japanese were about to field their extra four tanks, however, they were not needed. In the real battle, the British managed to hang on for four days before Japanese landings on the Perak River threatened their rear areas and they had to withdraw. I was not so lucky and my defence, although spirited, was easily smashed by the Japanese attacks. I was happy to have given a hard defence in the jungle and Kampar itself, but ultimately the odds were against me again!

This  campaign is still definitely heading the same way as the historical events, the British defences failing in front of crushing Japanese attacks. The next engagement is at the Slim River, the last defensible position before Kuala Lumpur, hopefully I can reverse my misfortune there?

In other news, I am selling some Blaze Away miniatures on EBay. They are all original casts from BA and they come from an aborted project to import their figures into the UK and sell them with reduced postage for UK customers. I will be putting more on EBay over the coming weeks, but have a look HERE.
Labels: 15mm AAR British Japanese Malaya Rapid Fire WW2