In the post recently, I received the latest additions to my now fast growing 20mm British force for Through the Mud and the Blood, being two Emhar British Mark IV tanks (Male and Female), plus a box each of Highlander Infantry and Indian Infantry, both from HaT. I put the Male tank together in about an hour and a half, whilst also tackling some Indian infantry. 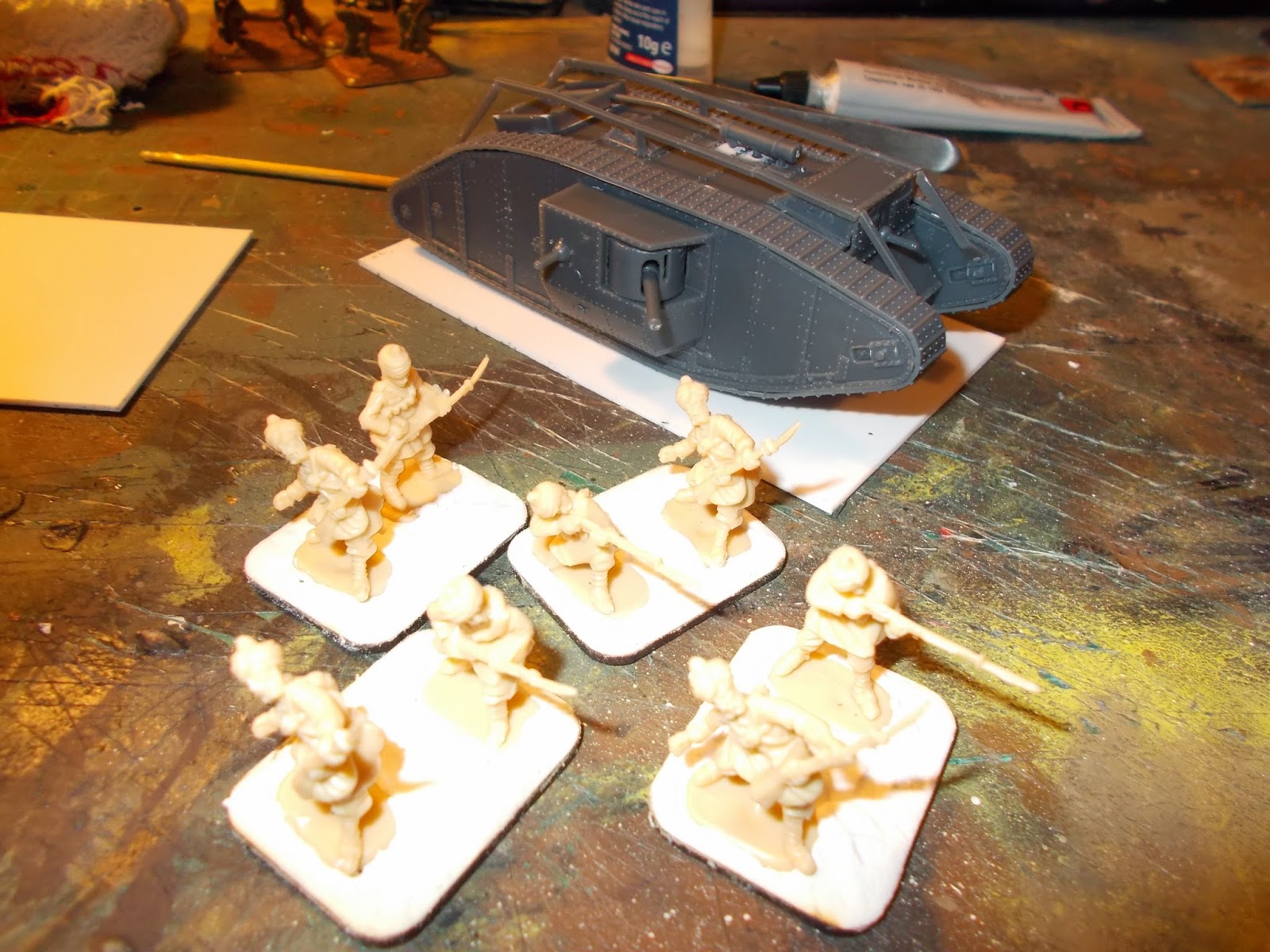 There was a couple of issues with the tank, one being the ditching beam rails. These are wrong when built straight out of the box, like I did, and they are too high at the rear. 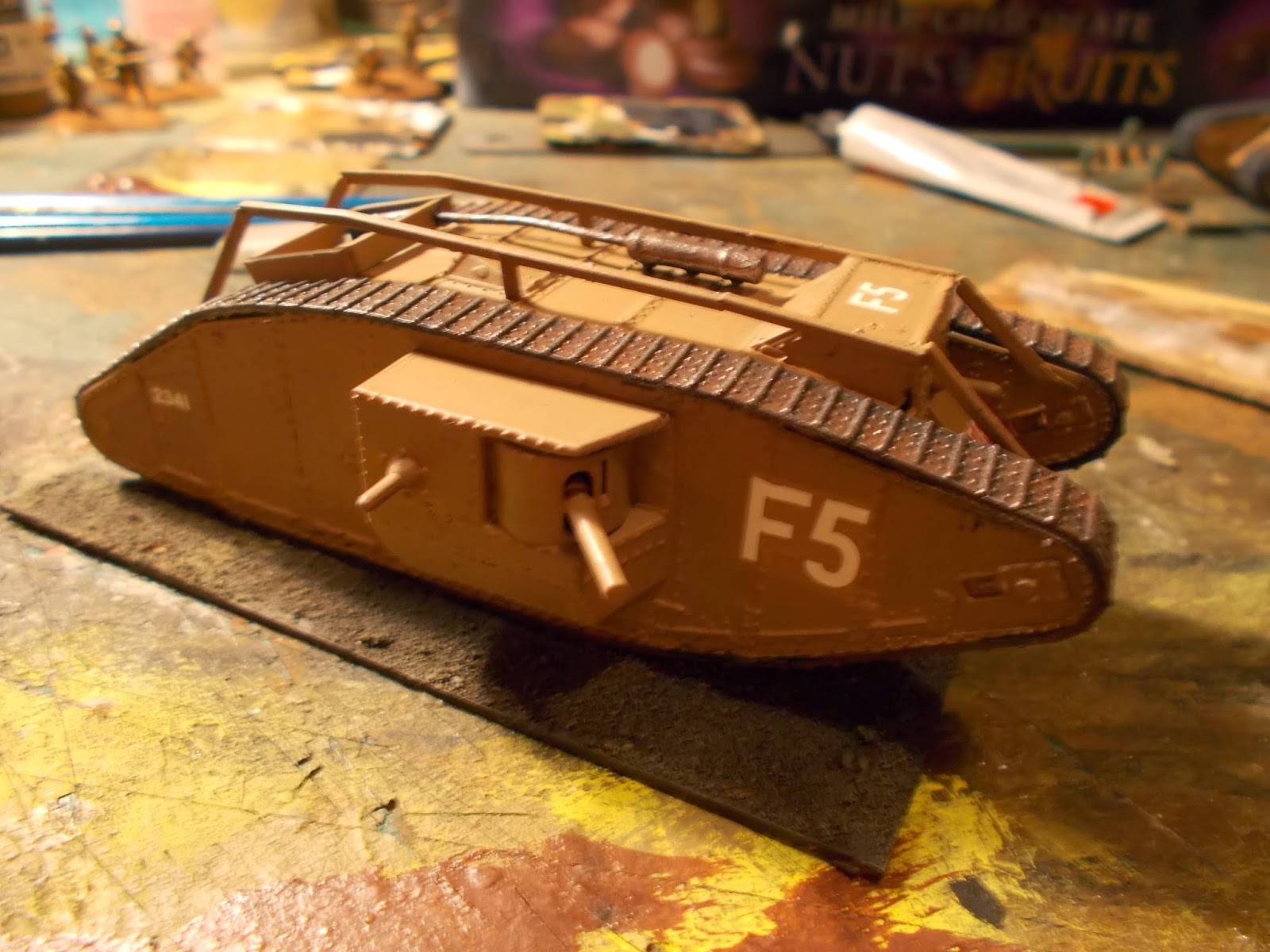 However, it's not a massive problem for me, just a slight niggle really. I could have corrected them, but I didn't bother in the end, other than that it was a simple job to build. These two photos show the tank in a pre-weathered state and there is still a bit more to do, including finishing the base properly. But that is all for the future! 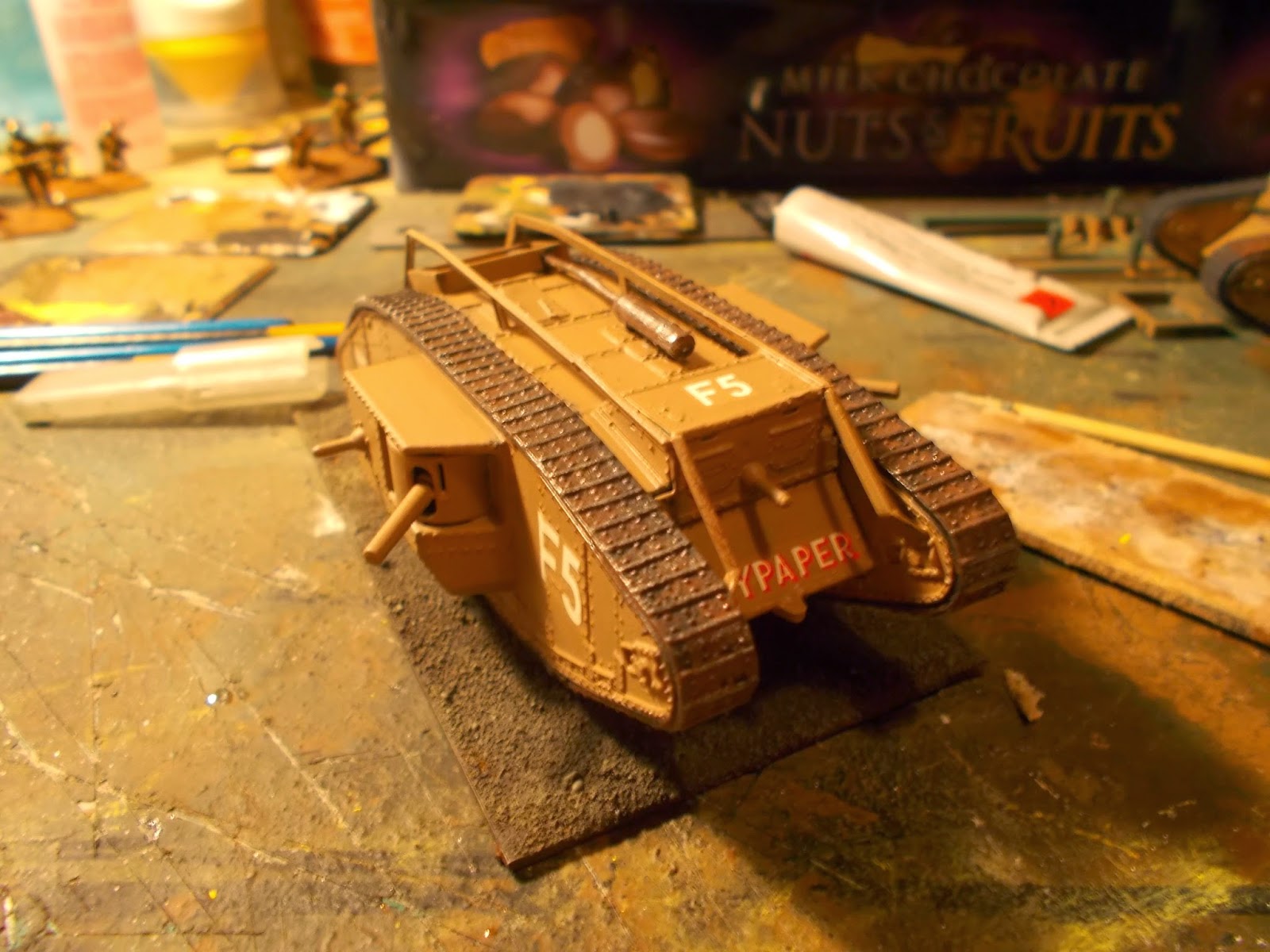 Back to the Indians, I painted the first eight as a group of bombers. There is enough in a box to make a platoon of four sections each of eight men. However, I will also need some Big Men, so I will have to buy another box of these chaps in the future. 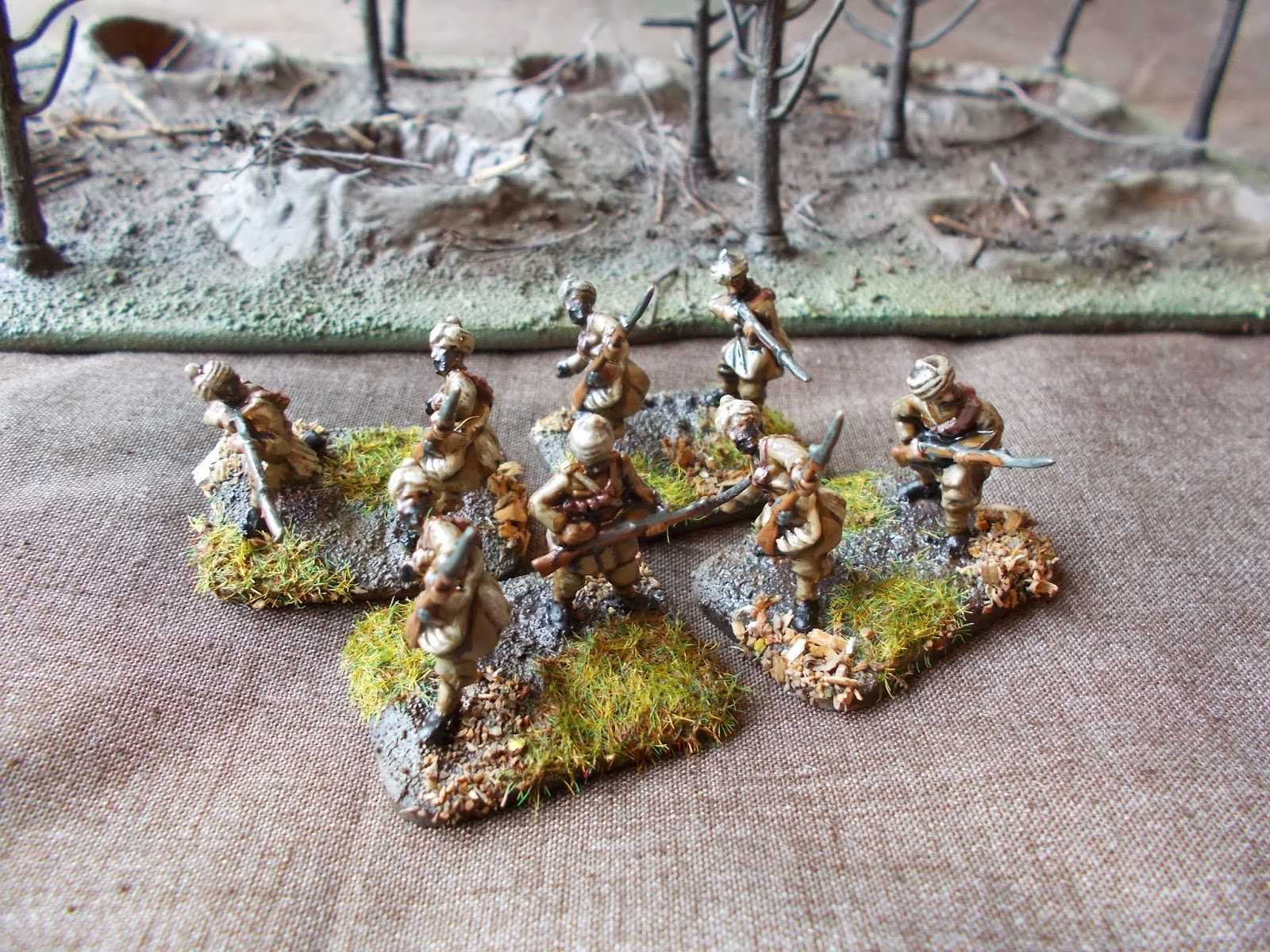 Also I painted these figures with a slightly different paint scheme to my previous British, I found that Sidney Roundwood had provided his readers with a late war British uniform painting guide, so I adopted that. I painted the tunics, trousers and puttees in English Uniform, highlighted with Khaki. The canvas webbing and Turbans were painted in Khaki, highlighted in Dark Sand, leather webbing was painted in Hull Red highlighted with German Camo Pale Brown. Between the base coats and highlights I applied Games Workshop's Black Ink (it's called something ridiculous so proves almost impossible to find in the shop. Why they just can't call it Black Ink, instead of Ork's Armpit Hair, or whatever, I just don't know...). 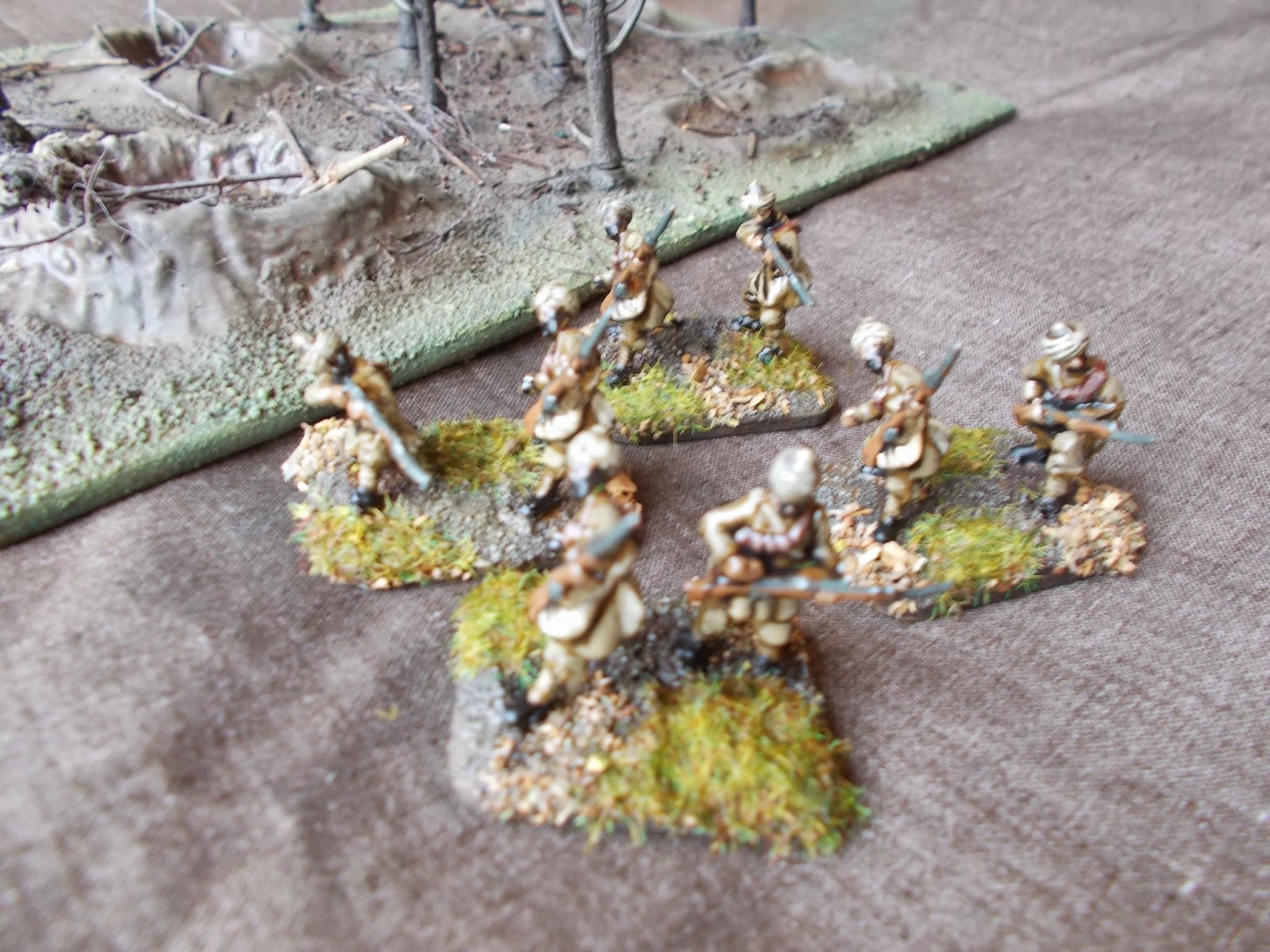 I'm pretty pleased with how these ones turned out and will use the same colour scheme in the future. These Indians will be used for 1915 games, which is why most of them will be riflemen, the tanks will be used for 1917 and 1918 games. So far this little project is growing out of all perceived proportion, so keep checking back for more updates!
Labels: 1/72nd 20mm Indians Infantry Model kits Tanks Work in Progress WW1