Dean and Ninjasaurus Rex called over on Easter Sunday for a game of Rapid Fire! and it's been a while since our last game, which was part of the Malaya campaign. This time, I turned the attention back to the Eastern Front with a scenario set in the early days of Operation Barbarossa. A German unit has captured a small village in Russia and paused to consolidate their position, whilst they awaited the arrival of some armour support. Meanwhile the Russians mount a local counter attack using a mixture of heavy tanks and infantry.

The opposing sides were;

The Germans set up in the village, which was also the Russian objective, with the two 88s covering the centre of the field and the armour just arriving on the German left flank. The Russian forces were spread with the infantry aiming towards the objective of the village and the heavy T-35s in the central position. On the Russian right flank were the lighter T-26s and BT-5s. Ninjasaurus and I took the defending Germans, whilst Dean handled the Russian forces. 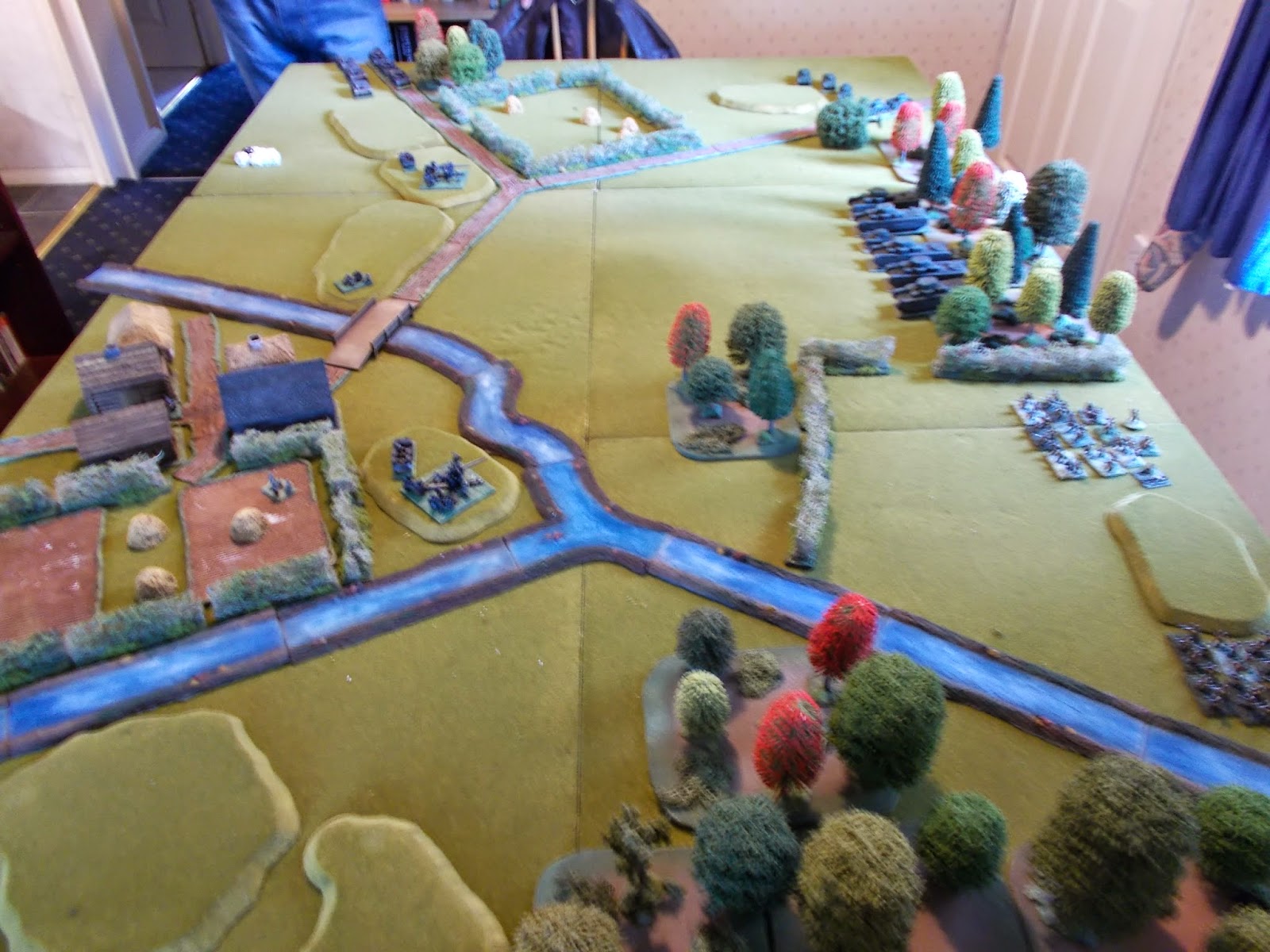 As the Russian behemoths rumbled out of the forest to begin the assault, one immediately broke down. However it was still ale to use its multiple turrets for firing. As they advanced, the T-35s came under heavy anti-tank fire from the 88s, plus the 75mm Infantry gun from the infantry battalion. 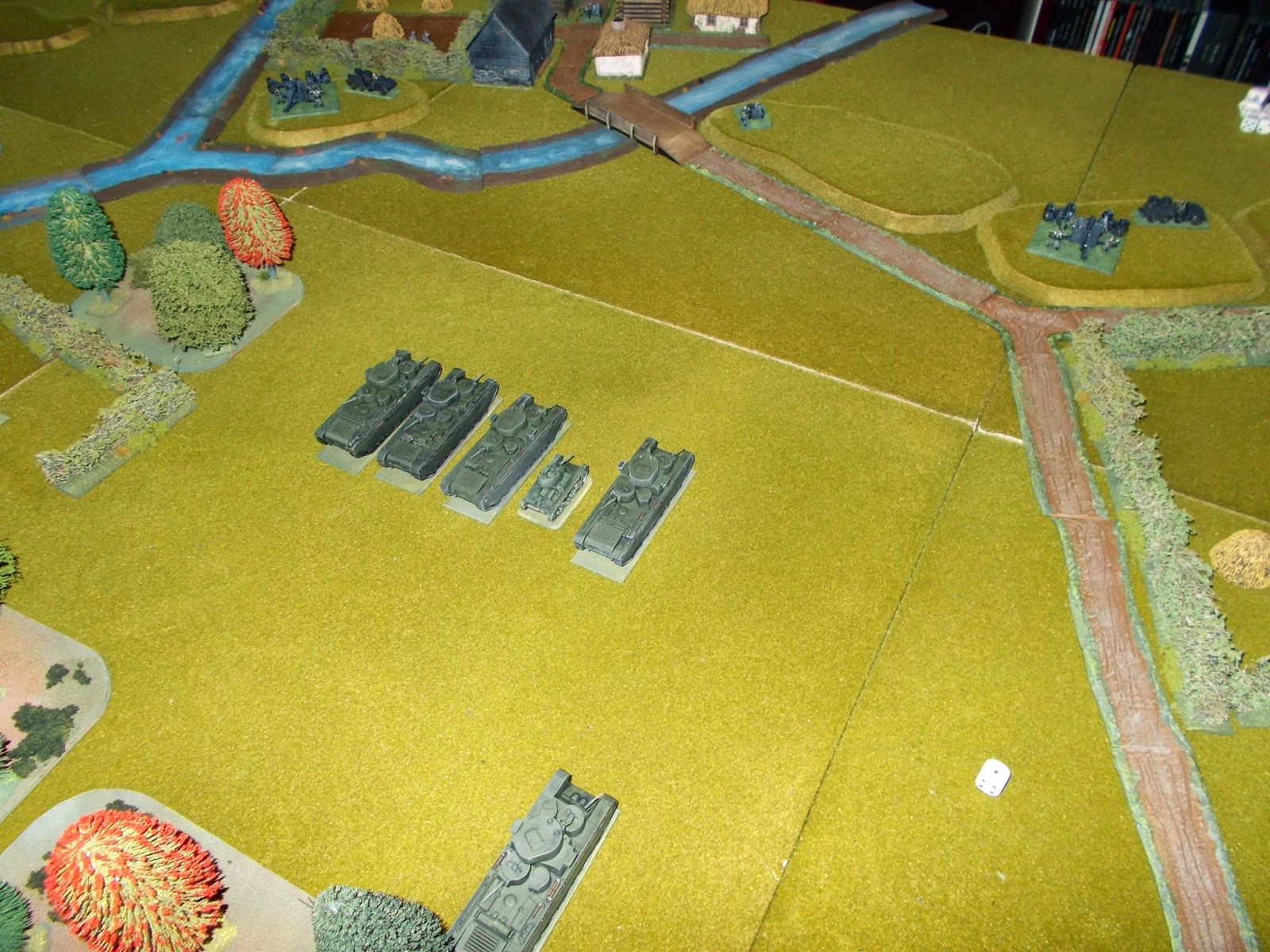 Suddenly, the light T-26s appeared in front of the left Flak gun and poured fire on it, causing casualties amongst the crew! 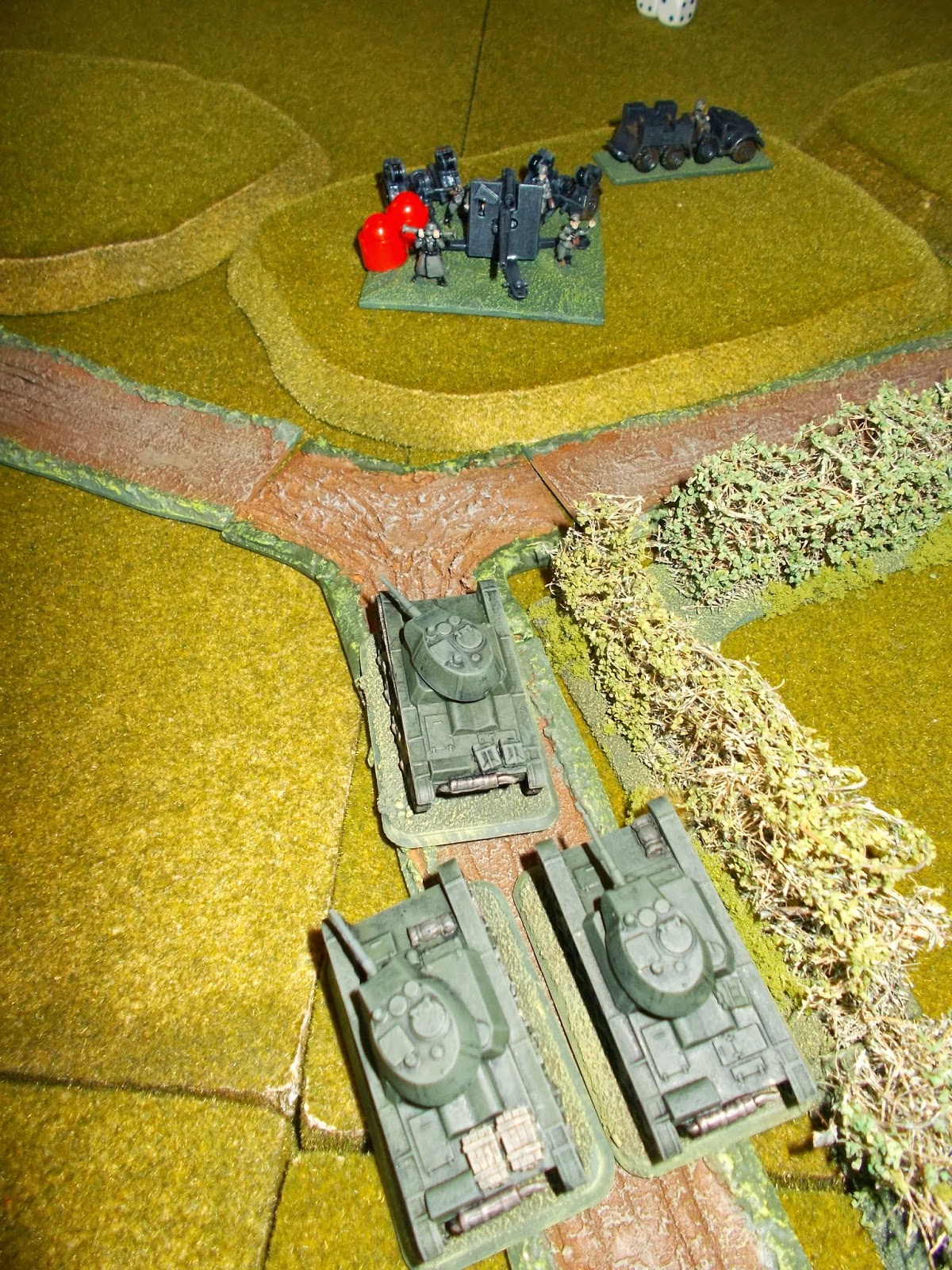 More combined fire from the T-35s saw the whole crew put out of action. 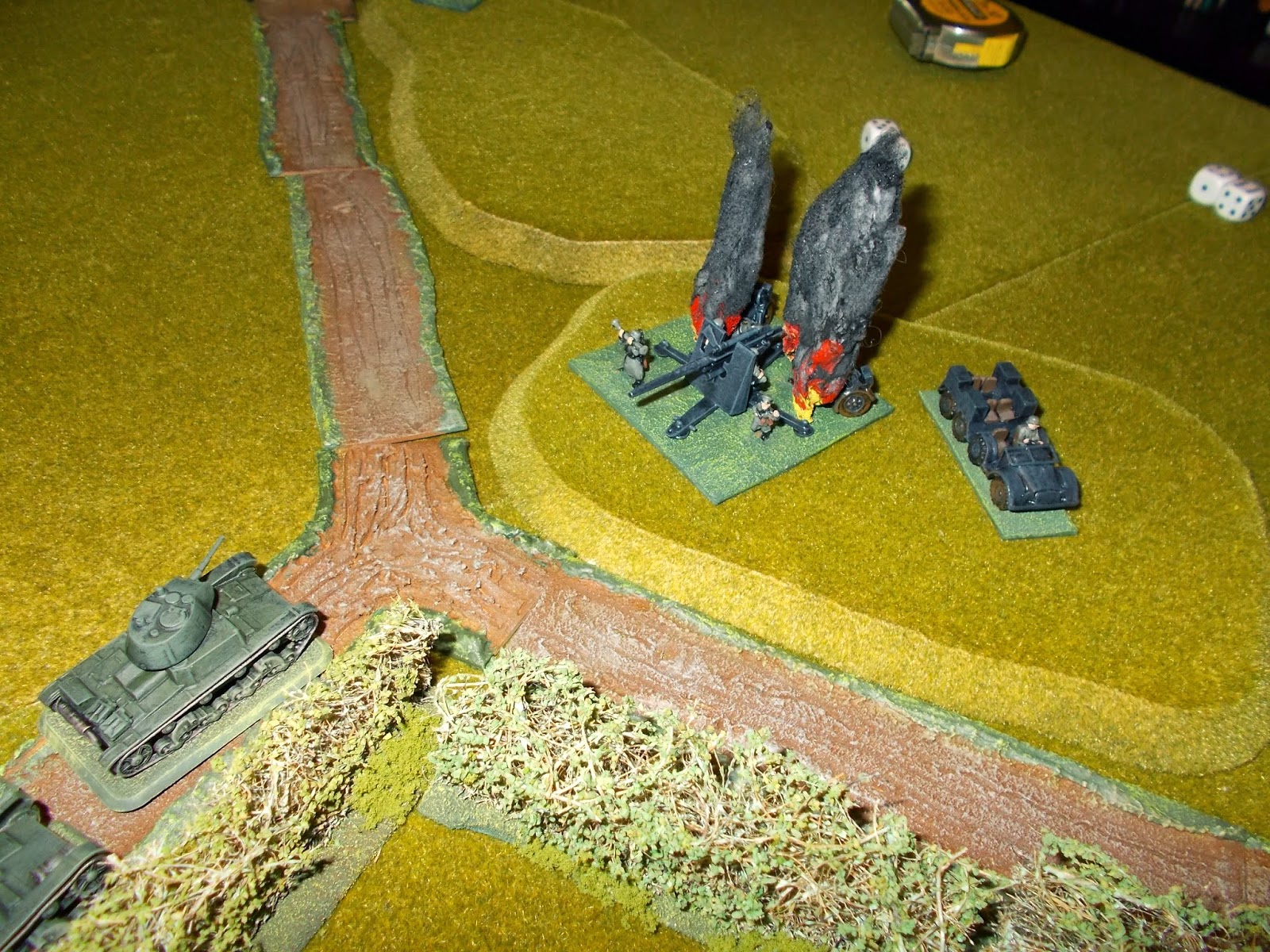 The brief Russian victory was blunted by the arrival of my armoured units, the Panzer IVs sped down the road, backed up by the StuGs on the hills. 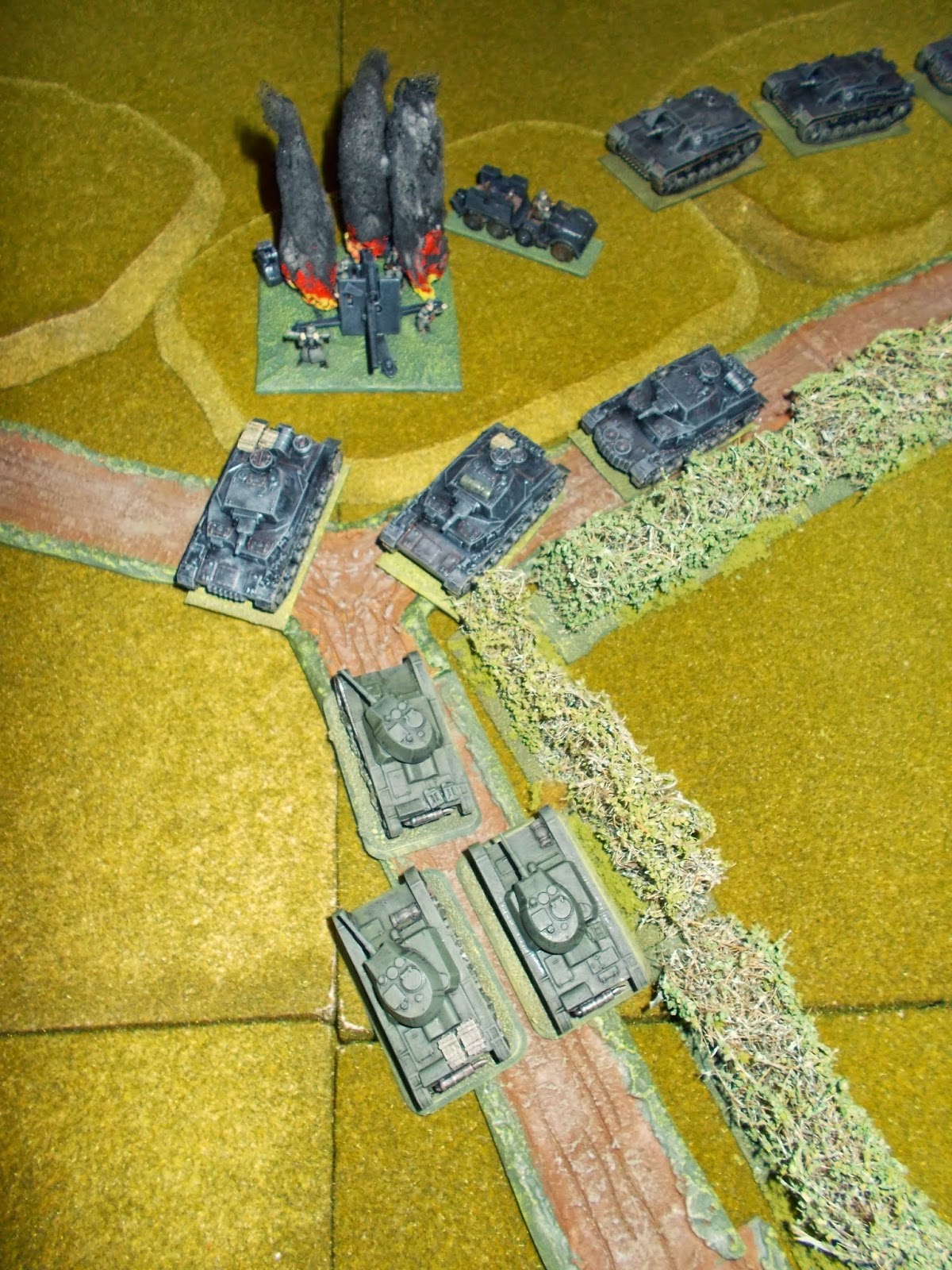 A vicious firefight saw one of the T-26s burst into flames and another heavily damaged. 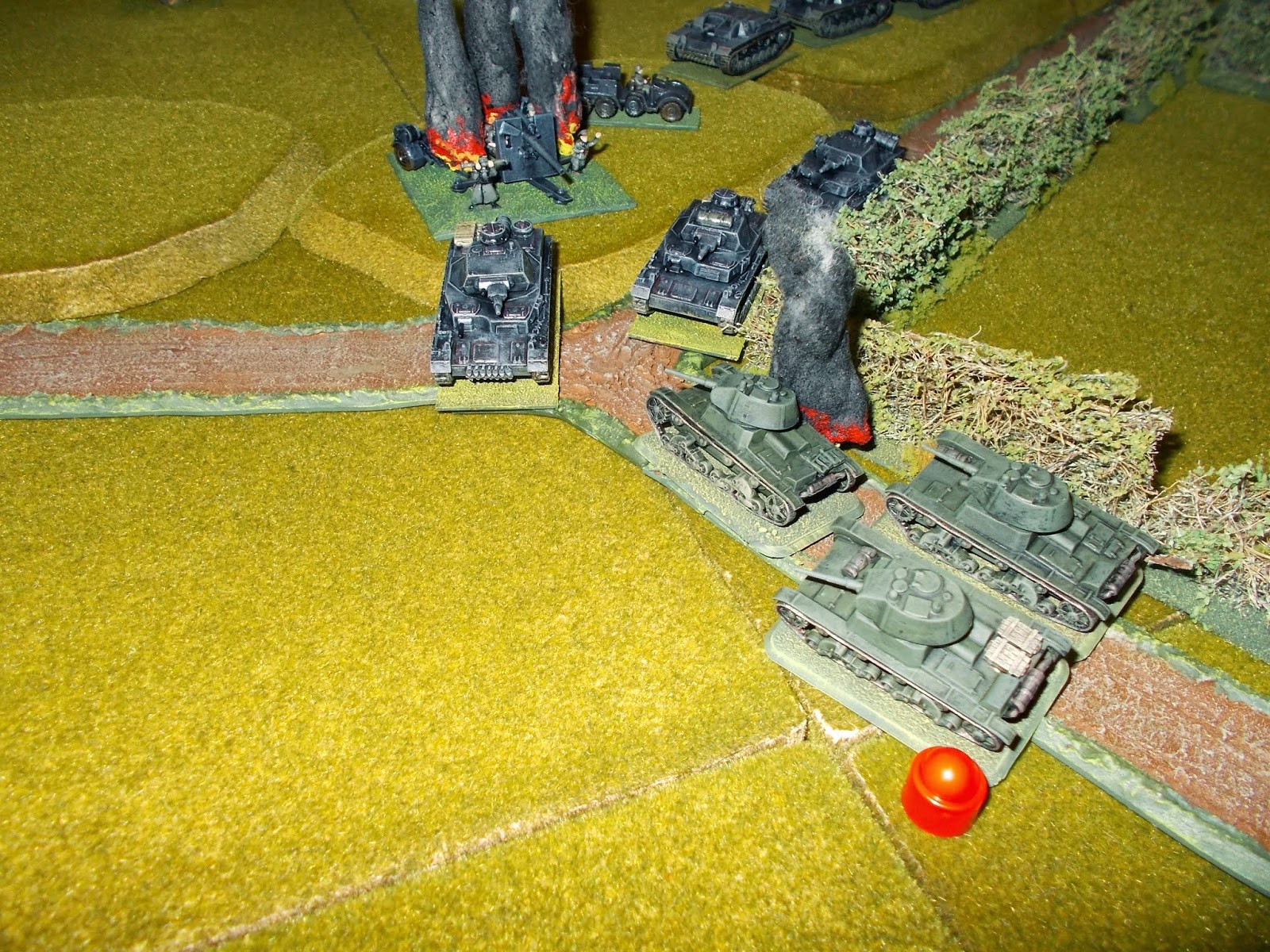 The Russian assault pressed on however, with the three BT-5s bursting through the field hedge and attacking the German armour on its flank. 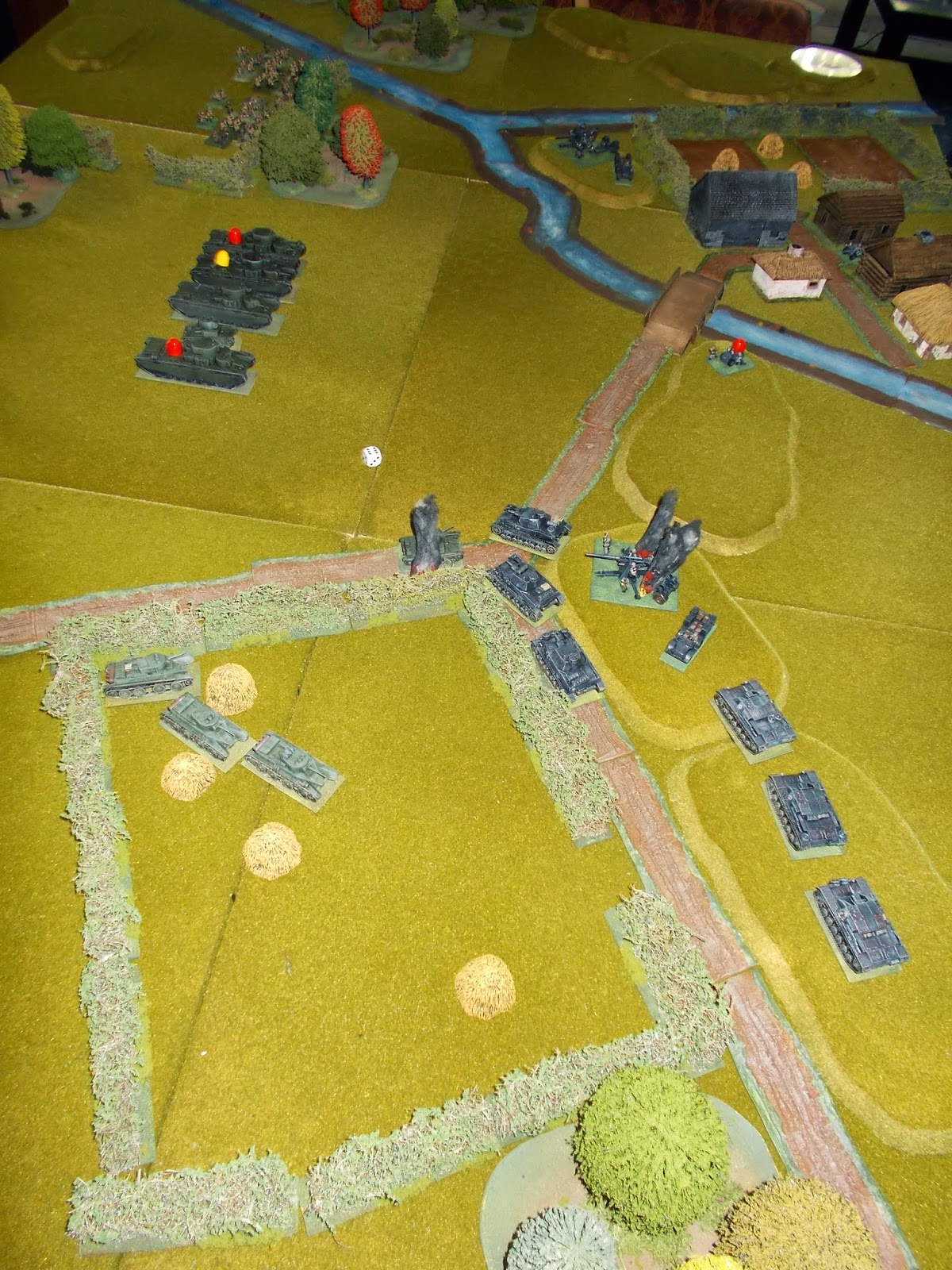 One BT fell foul of a StuG, but the remaining two shot holes through the assault gun. 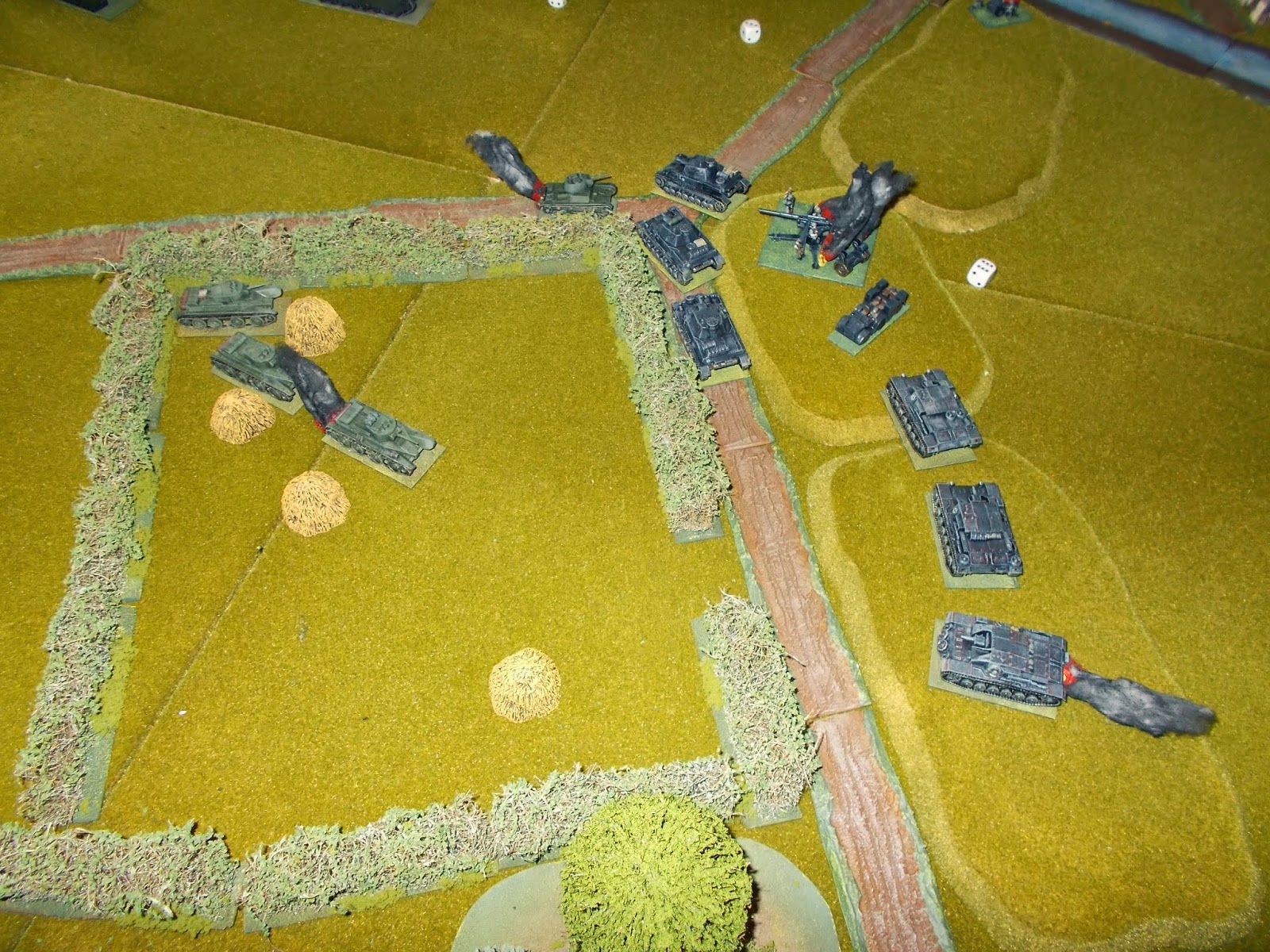 In the centre of the field the second 88 was destroyed under a deluge of fire from the Russian heavies, who's own attack had stalled. 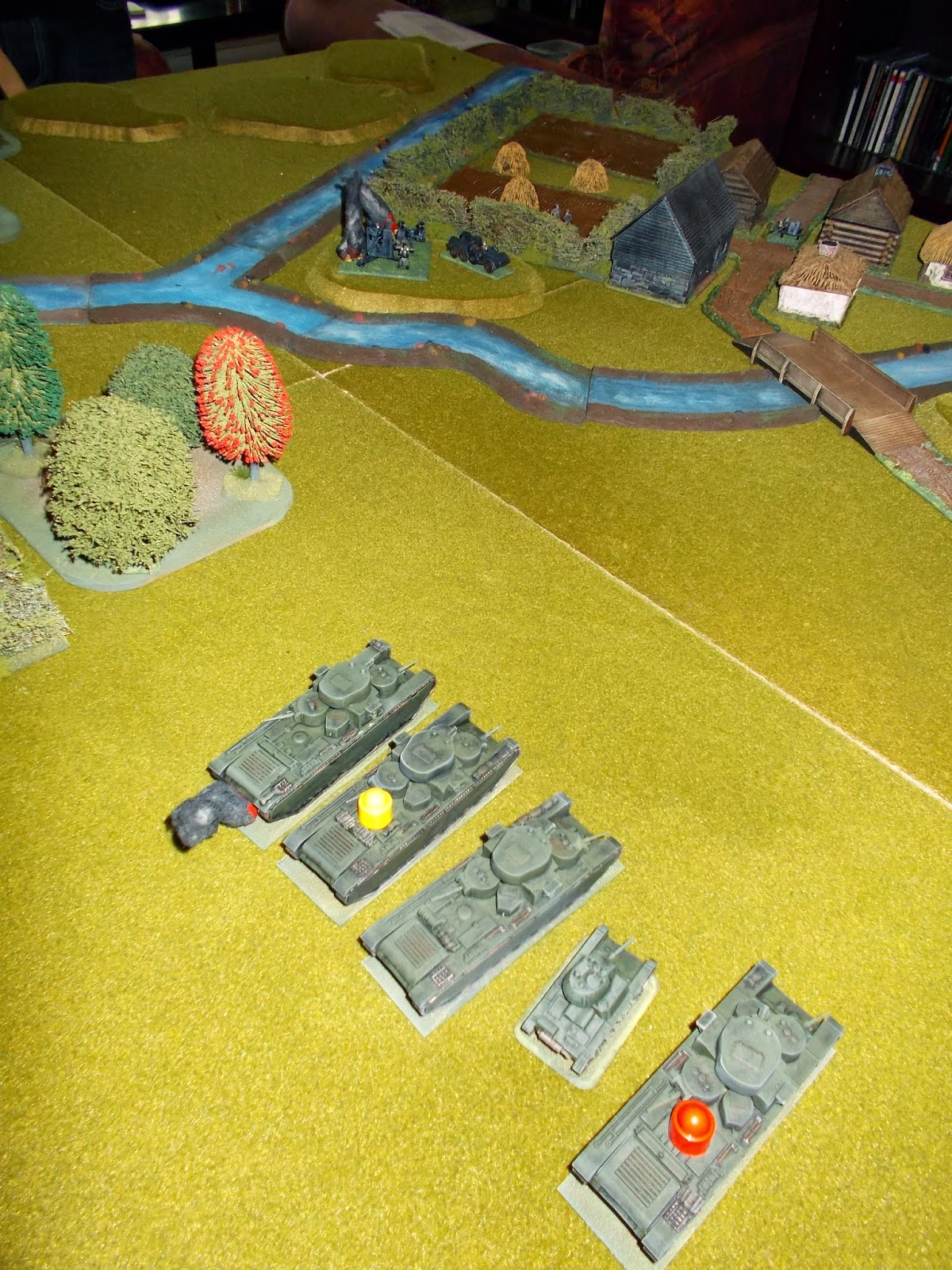 One of the two remaining StuGs confronted the BT-5s in the field and left another one burning. 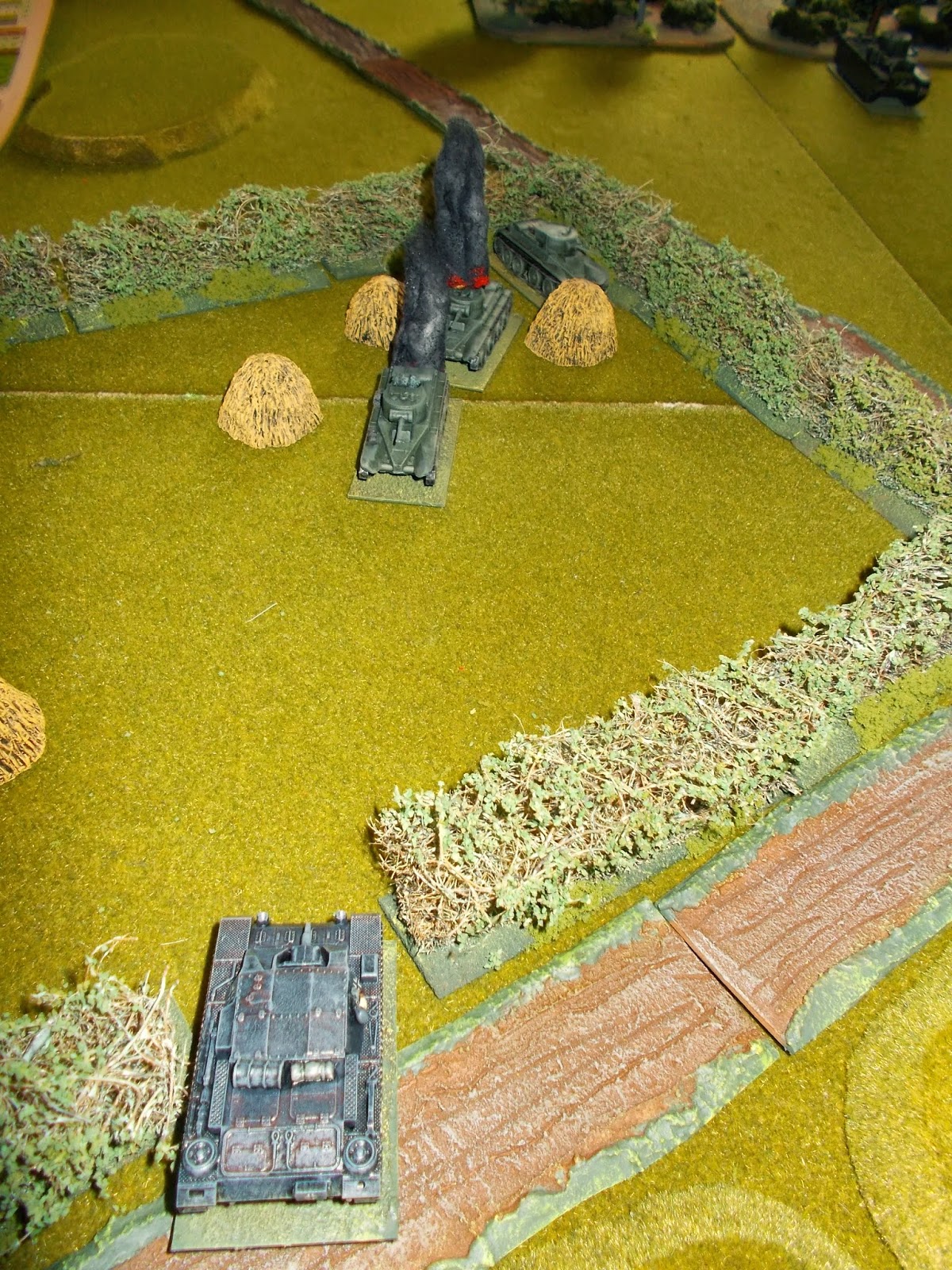 The rest of the German armour exchanged shots with the Russian tanks, but failed to destroy a single one! 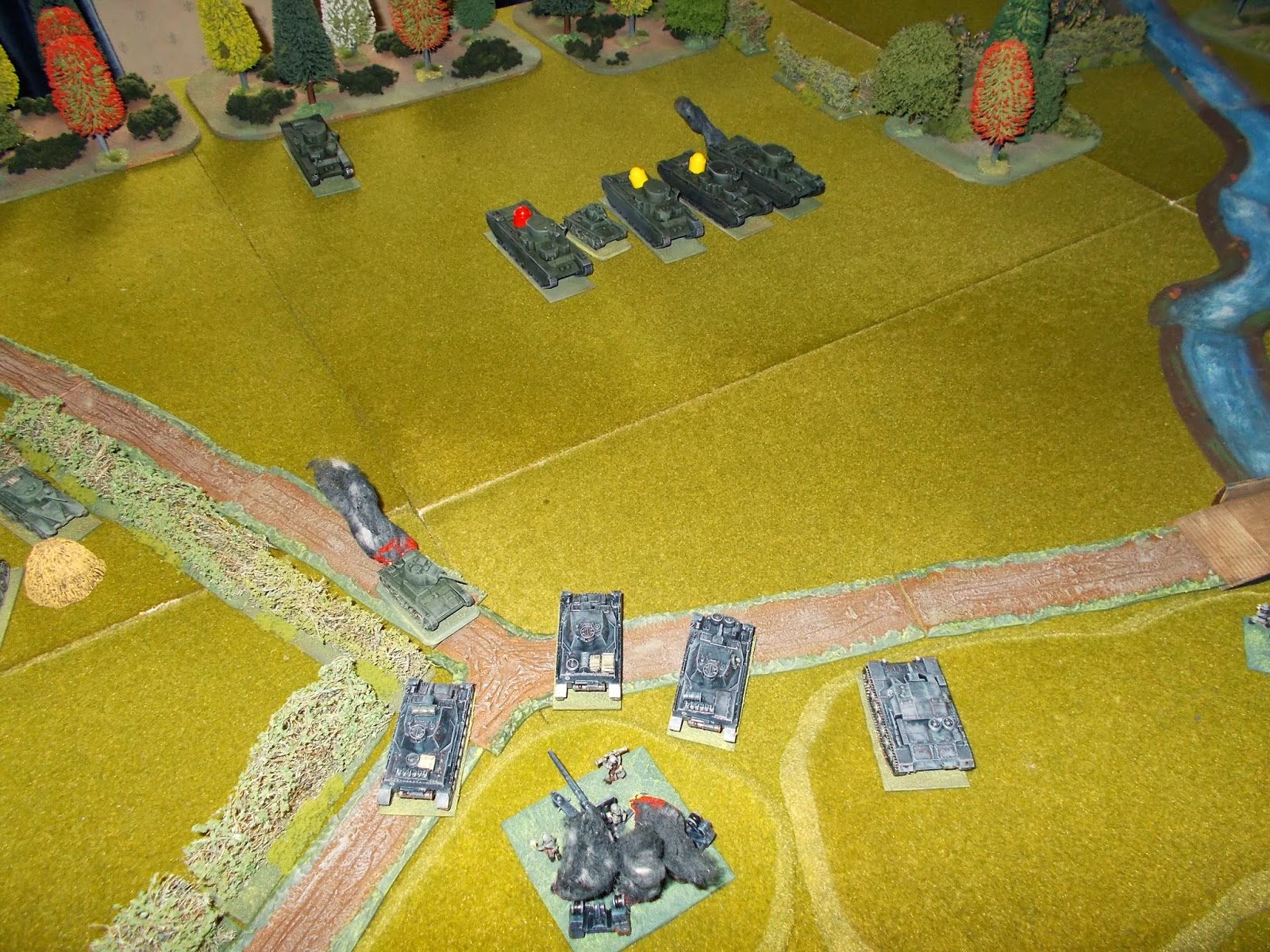 Whilst the clash of armour continued, Soviet infantry cleared the hedges and worked their way around the flank of the village in order to get in close to use grenades in clearing out the defenders. 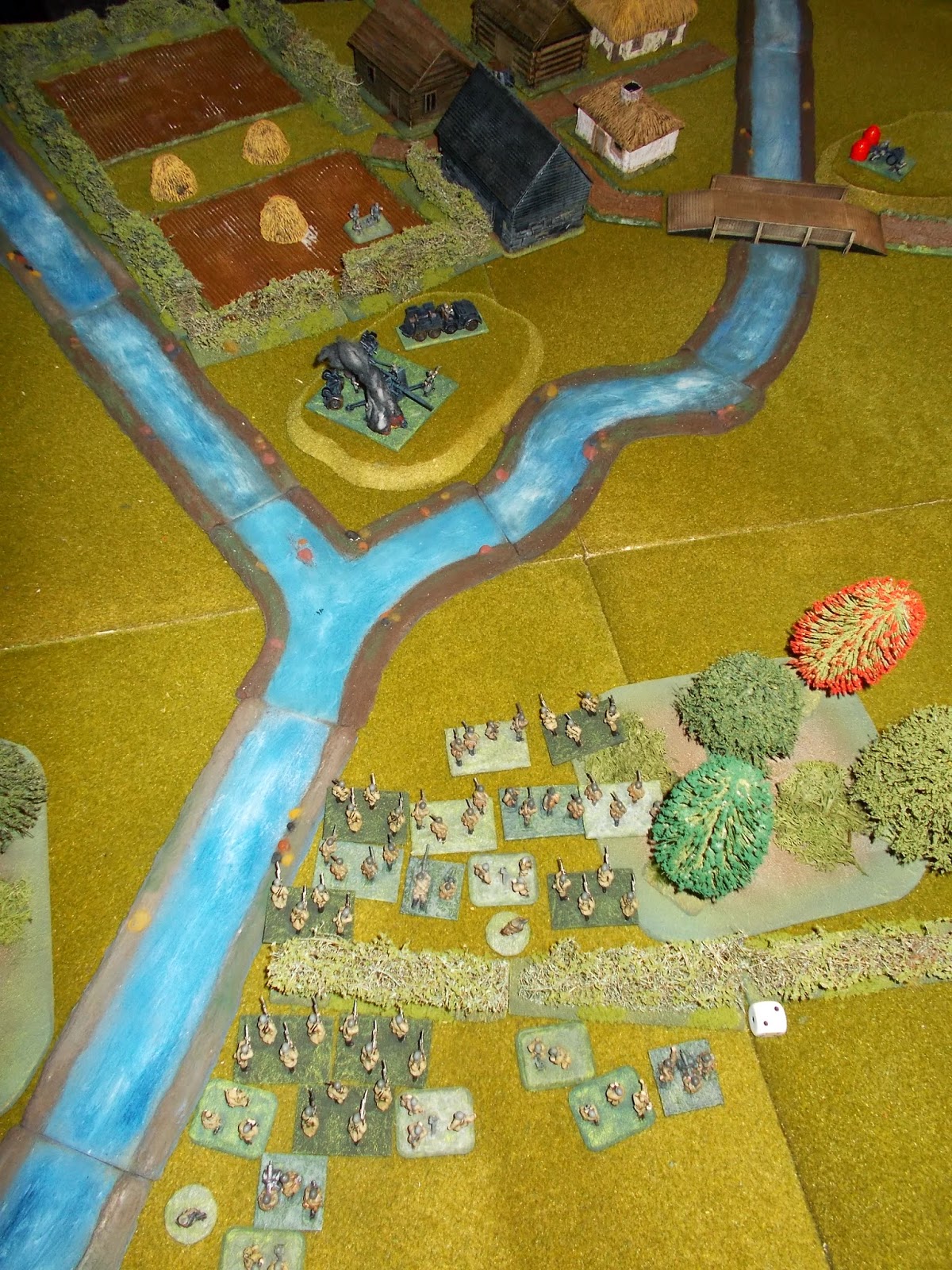 With two of his comrades on fire, the remaining BT-5 fled the field, another StuG brewed up from fire from the T-35s. The heavy tanks weren't getting off lightly though, as three were heavily damaged by the Panzers. 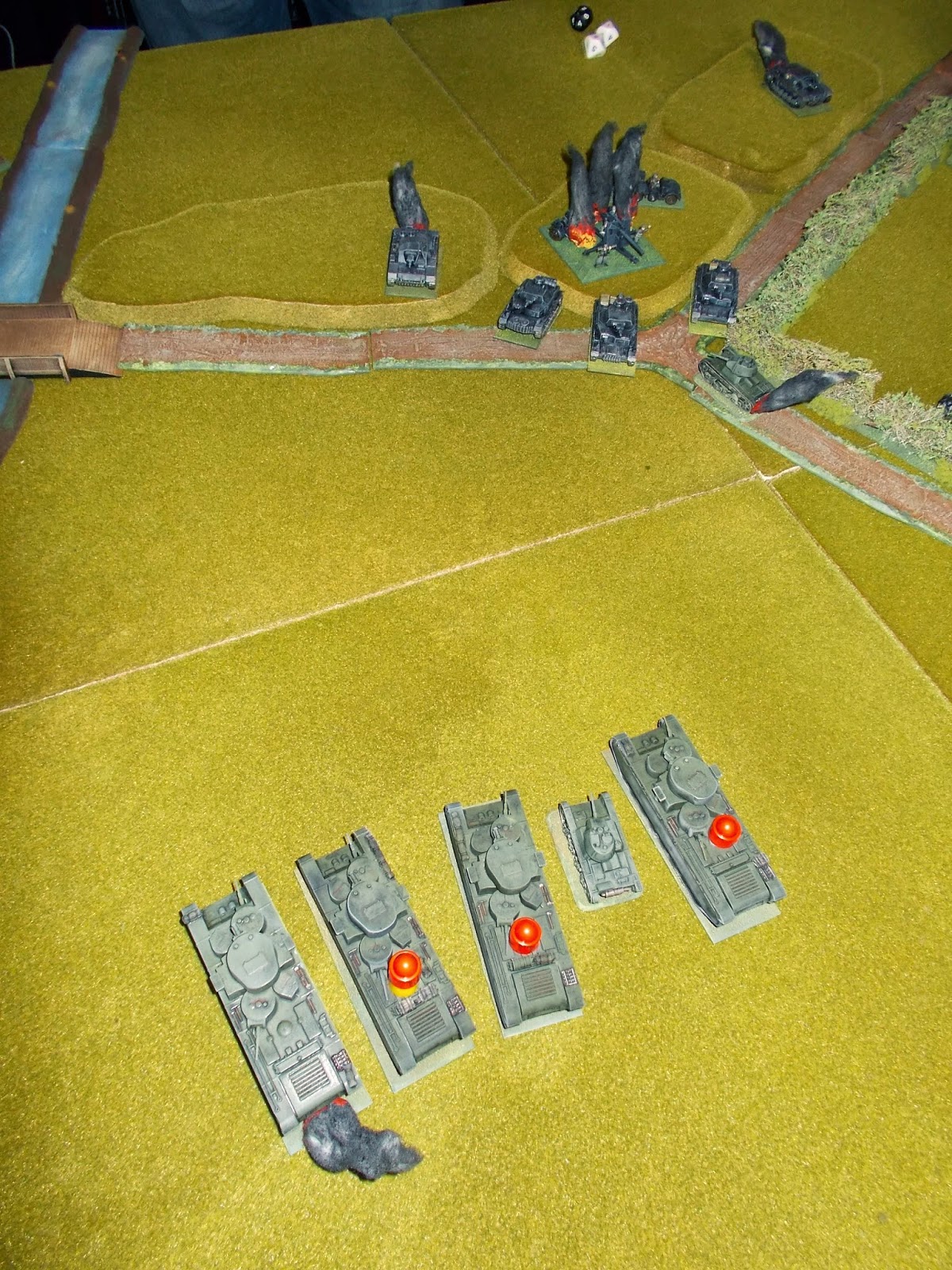 They then failed their morale test. Well, with three heavily damaged and one destroyed it wasn't surprising, and they turned tail and fled the field with the other Soviet armour. 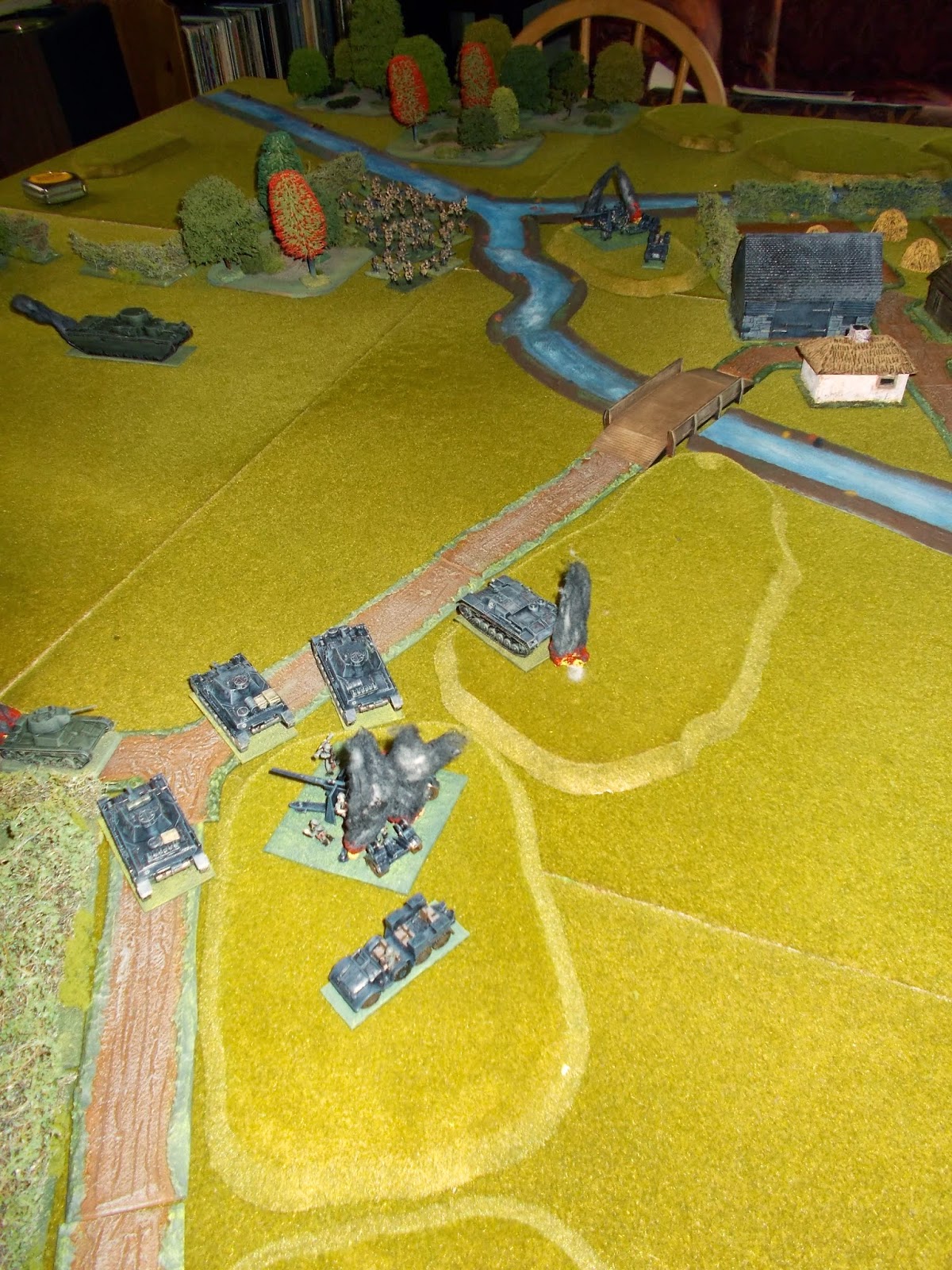 Now it was the infantry's turn to take fire. The MG34s and mortars in the village opened up as the assault came into sight. 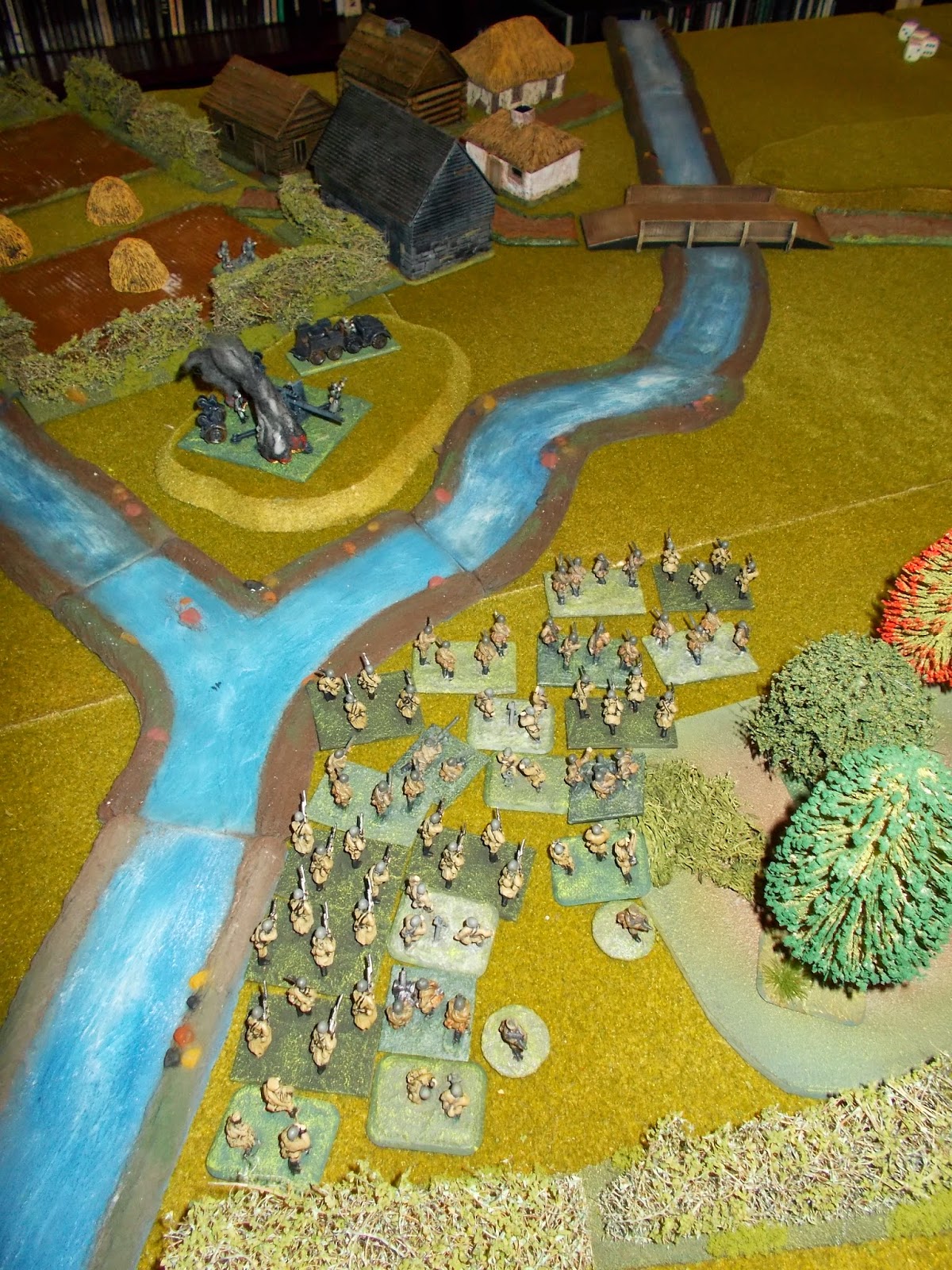 Being in the open the Russians took casualties immediately, but continued their attack. 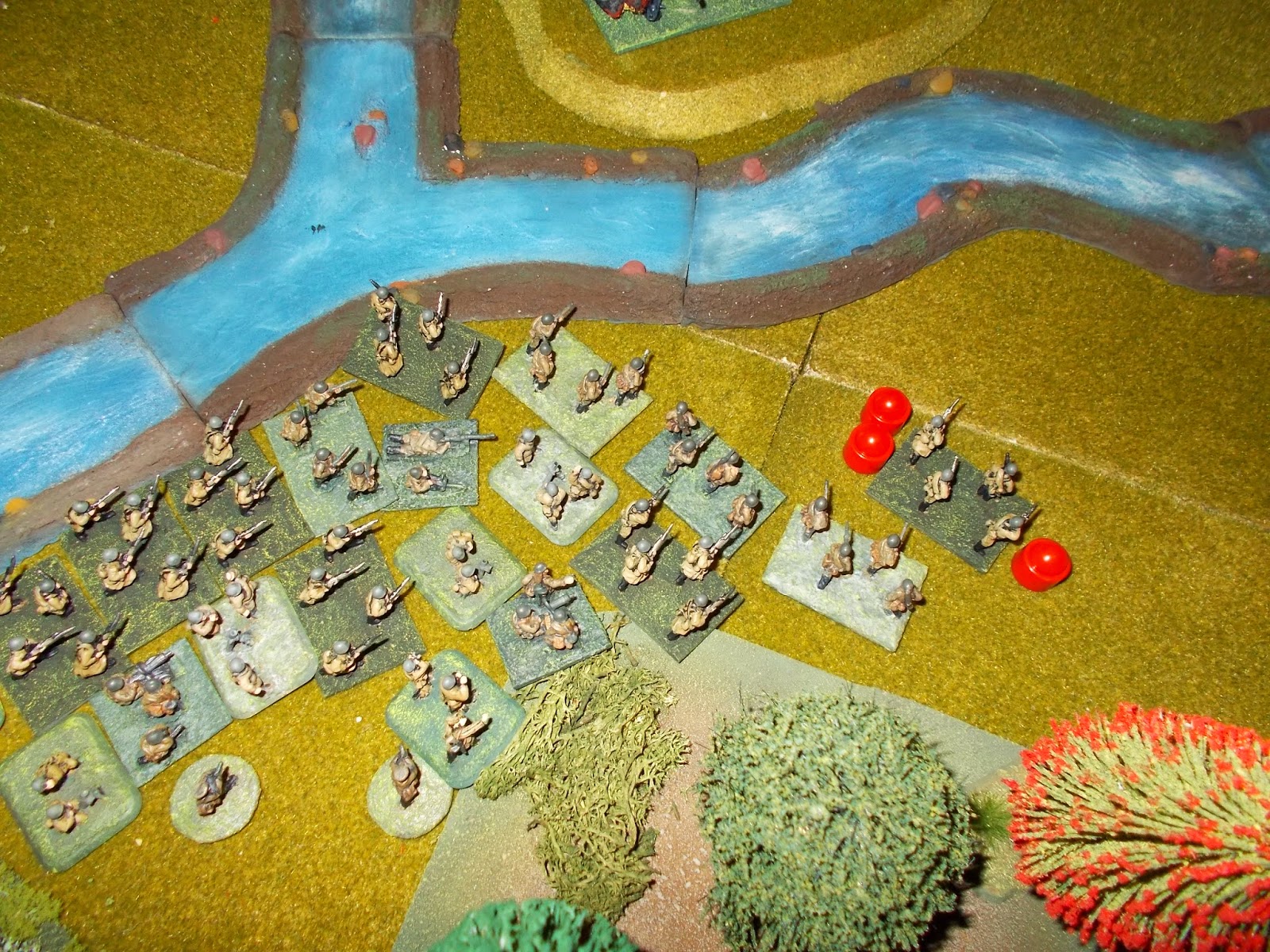 With no Russian armour left on the field the German Panzers turned their attention to the Russian infantry and poured more fire into the massed ranks of men. 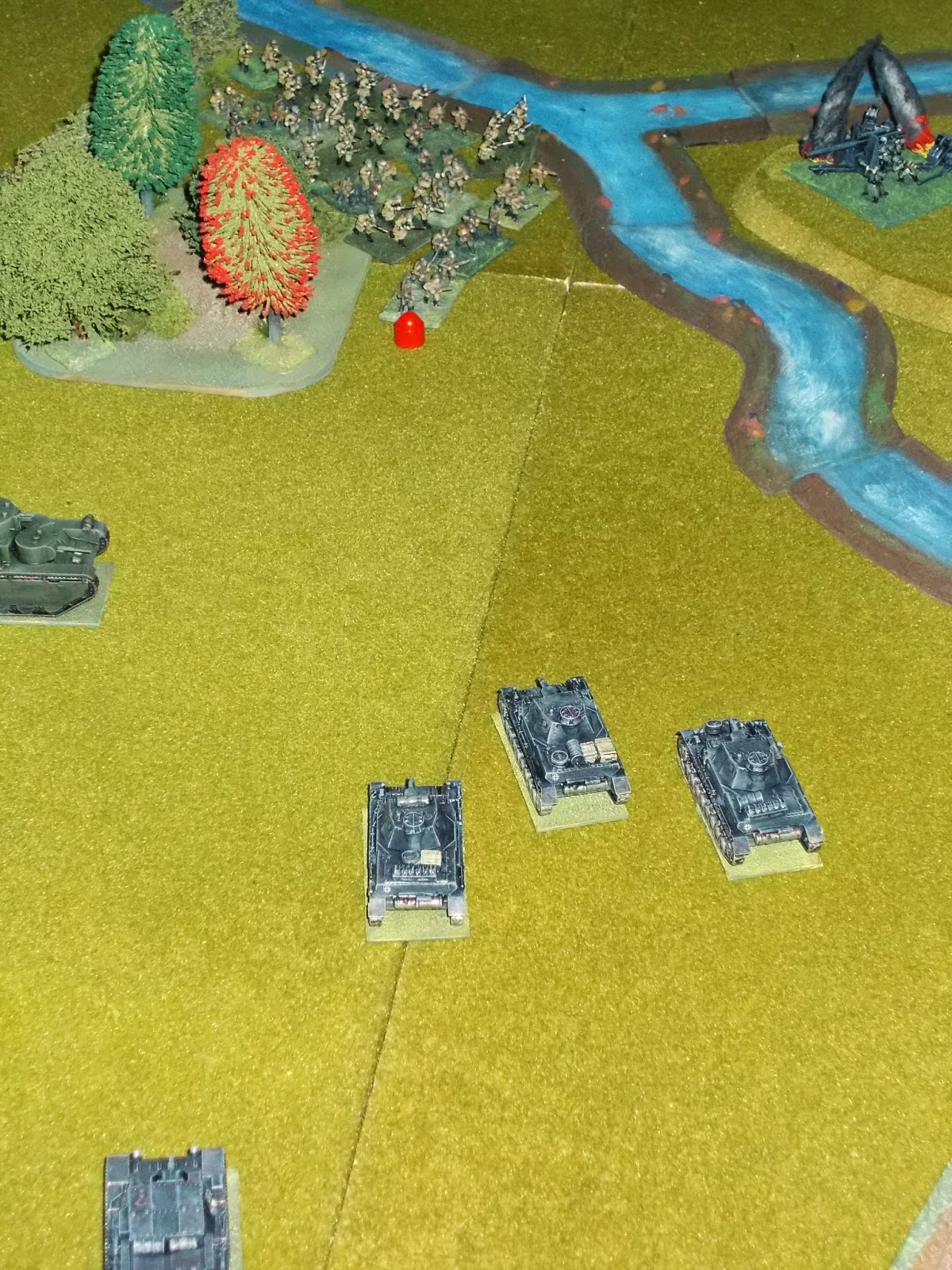 The Soviet attack was stalling at the river. The soldiers were finding it hard to wade across the water and were being enfiladed by the tanks. 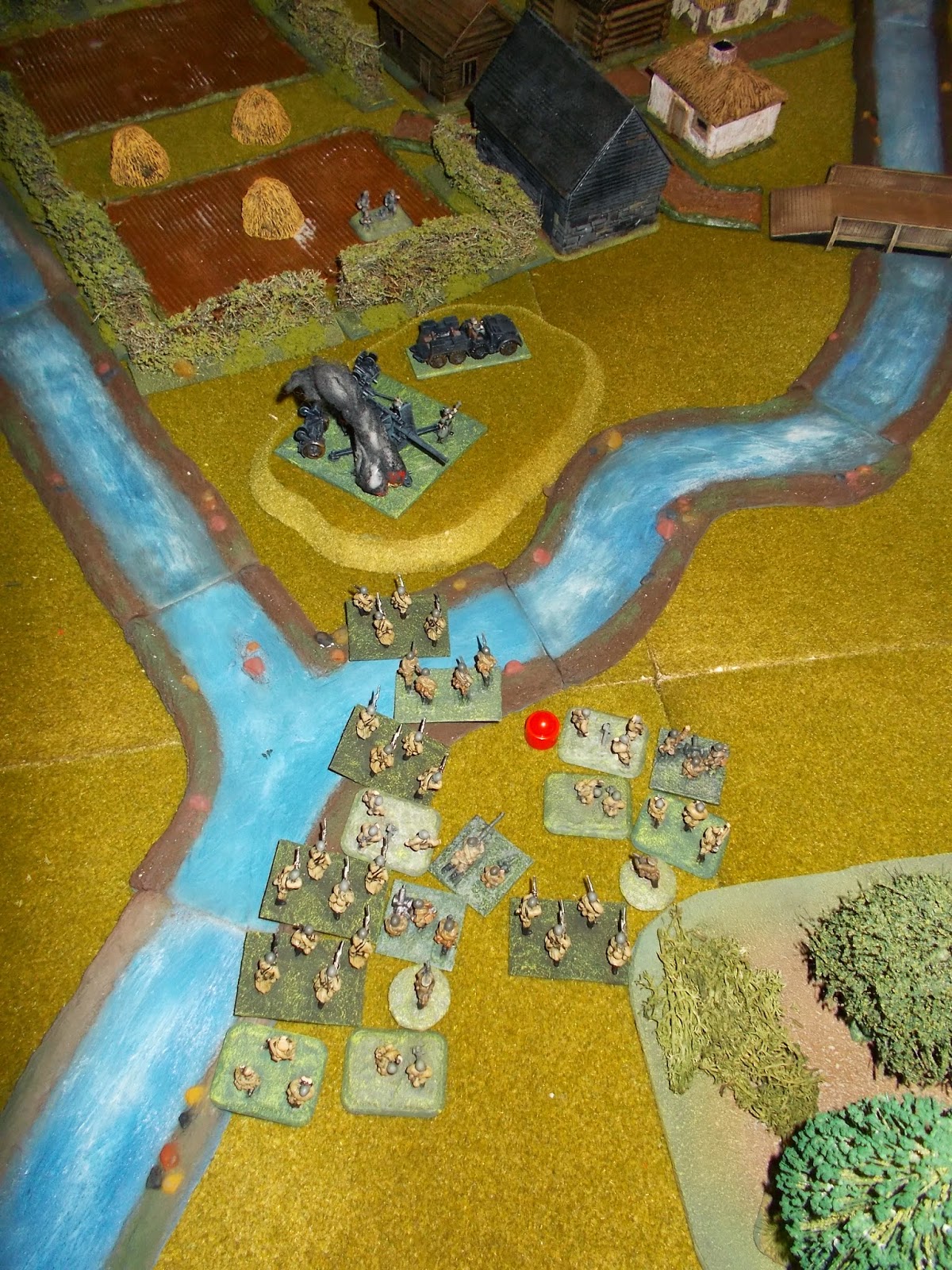 With fire coming from two sides one of the Russian battalion's morale broke and they routed off the field. 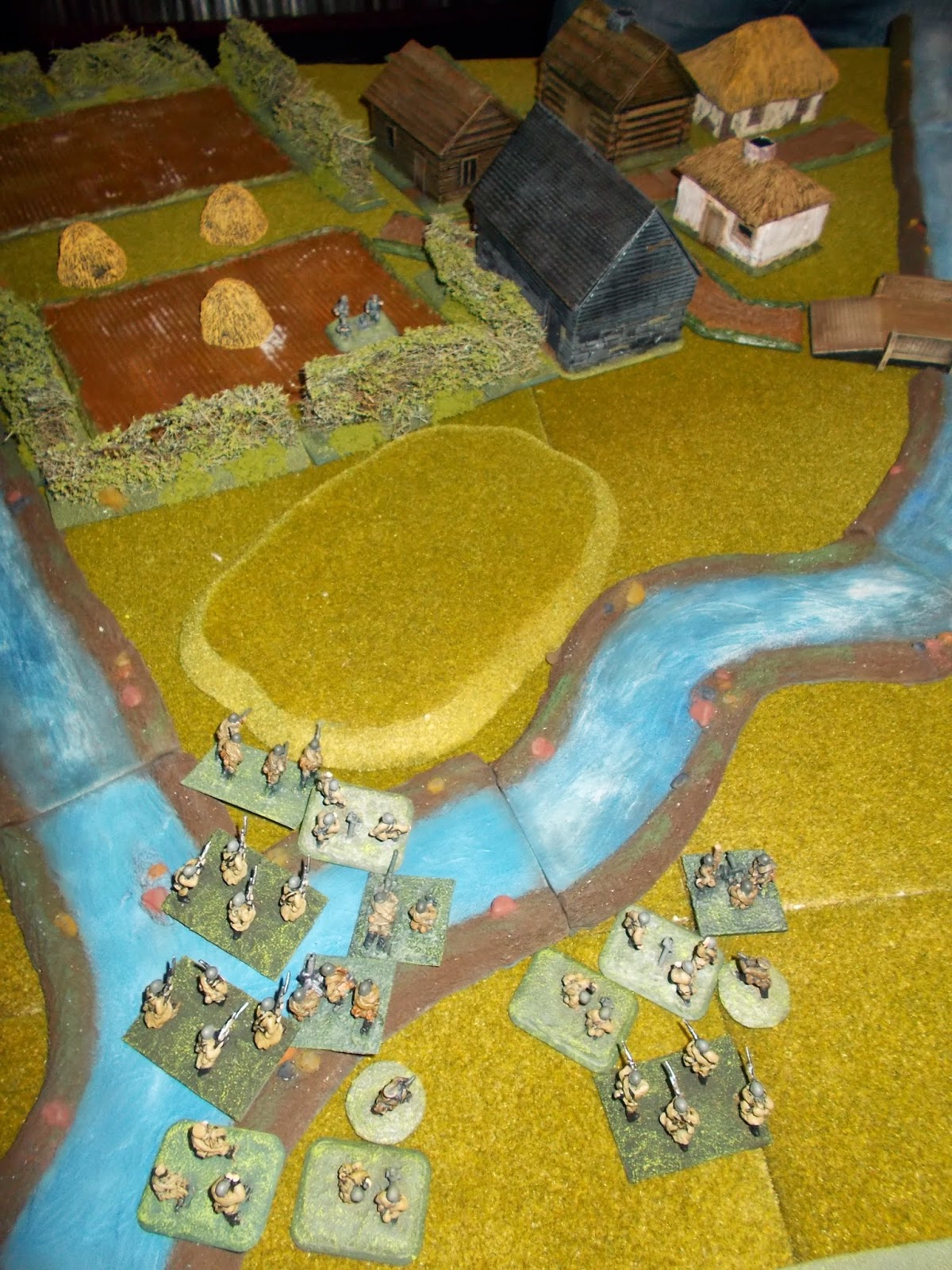 The final move showed the desperate situation of the Russian assault. They were still a couple of moves away from the buildings in the village and the defences were still largely intact. 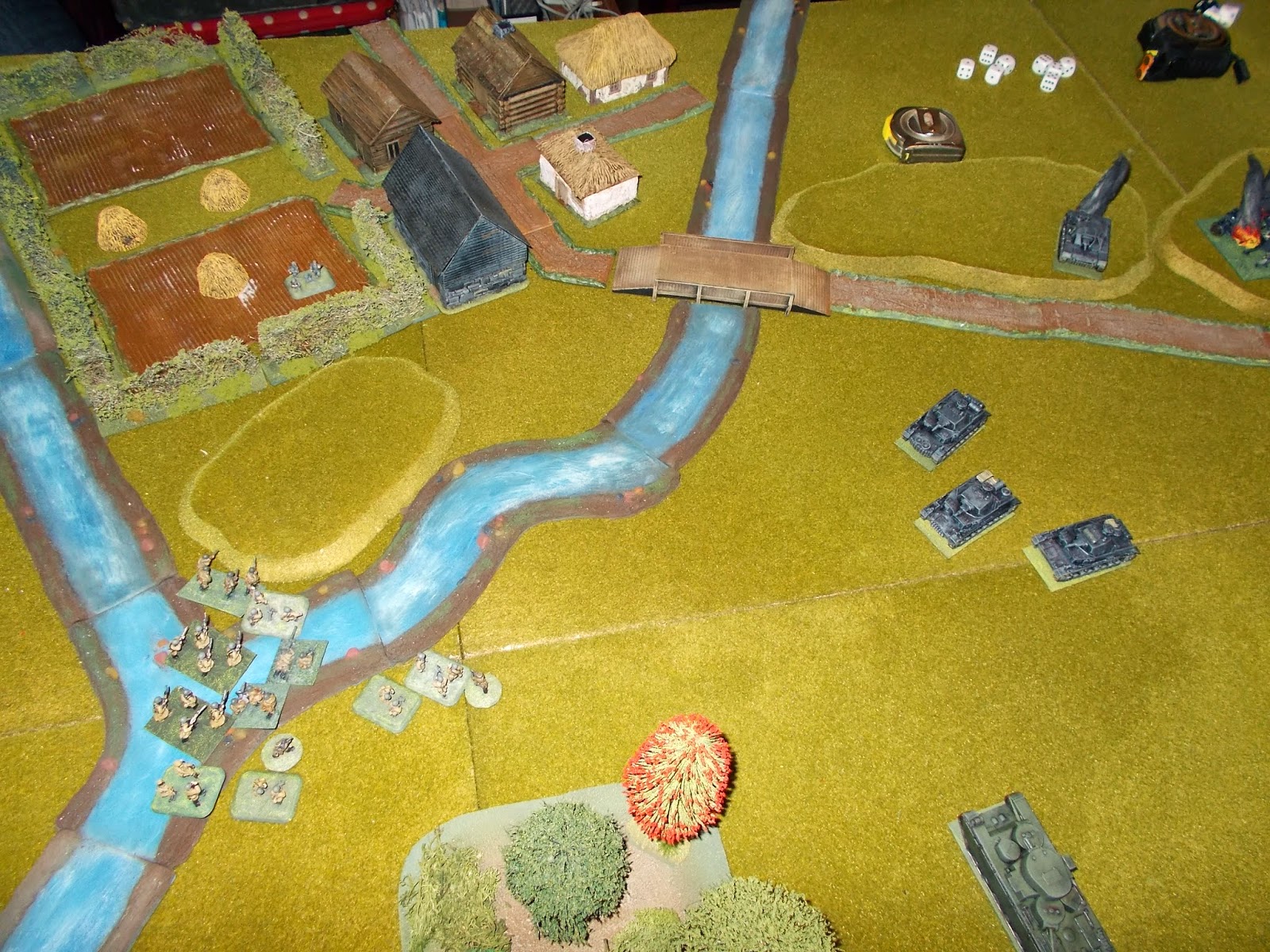 Although this was a satisfying victory for the Germans, it was good to field the T-35s, which have been sitting in the cupboard for quiet a few months now. They instantly became bullet-magnets, due more to their size than their actual performance! The same could be said of the 88s, both of which came under fire immediately and didn't last very long at all!
Labels: 15mm AAR Germans Rapid Fire Russia Soviet WW2