Dean popped over on Sunday for a quick game of Rapid Fire! I decided to use my newly painted Americans against a force of half-tracked transported Panzer Grenadiers, with the Germans counter-attacking a bridge objective somewhere in Holland 1944. The weather was bad which precluded any air support, so the PBI were on their own. However, the Germans were supported by three Panzer IVh and three Marder II. For more equality the Americans had support in the form of five Sherman M4A3s (these were taken from my Soviet forces, hence the lack of stars...). I gave Dean the choice of which side to take and he plumped for the Yanks.
Our initial set-up looked like this: 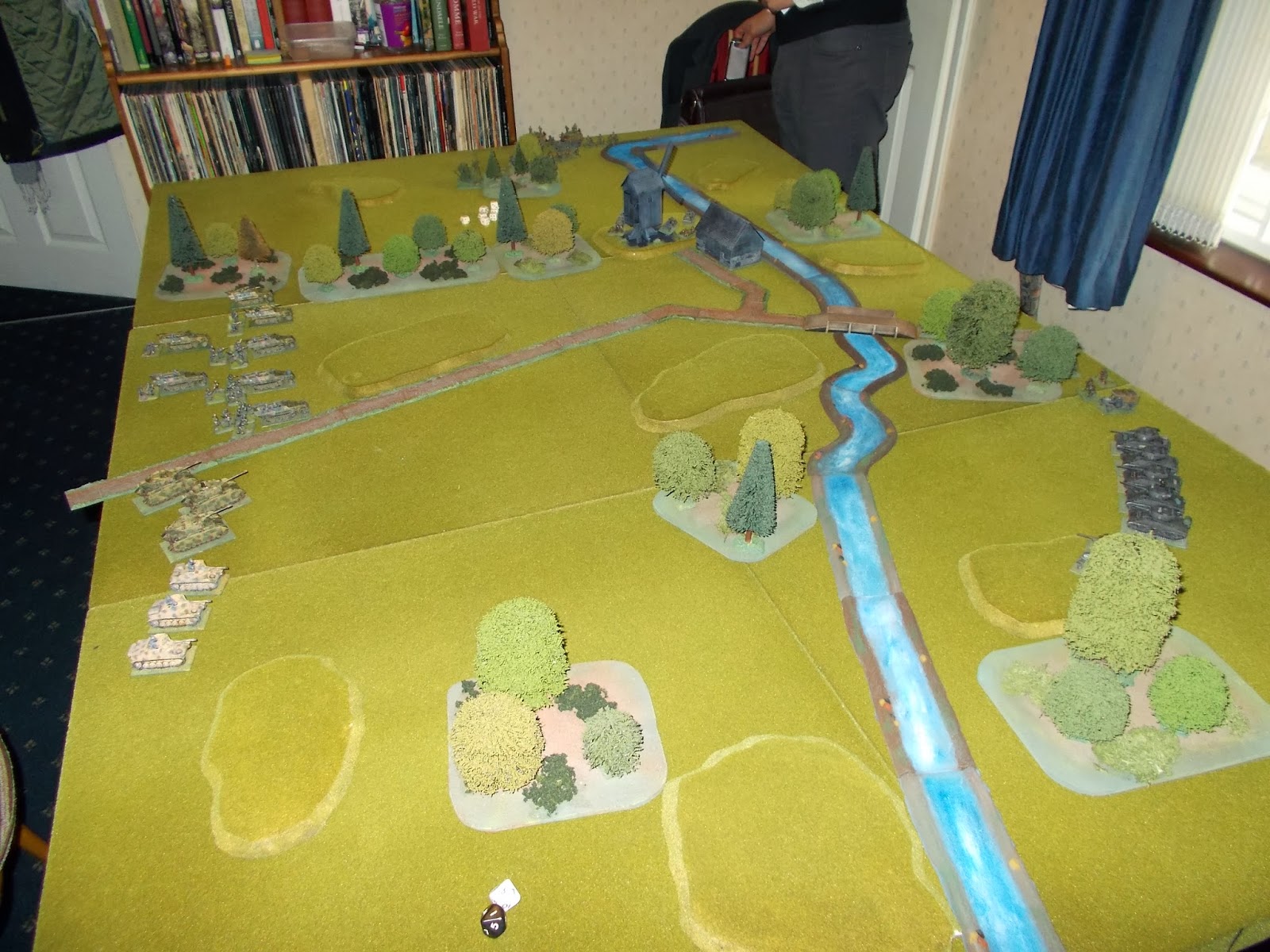 I started the game as the attacker and drove my half-tracks by the central hills to cover them from the American Shermans and a 57mm gun placed on his left flank. However, they immediately came under fire from his emplaced .50 Cal sat by the windmill, but fortunately for me with no effect. 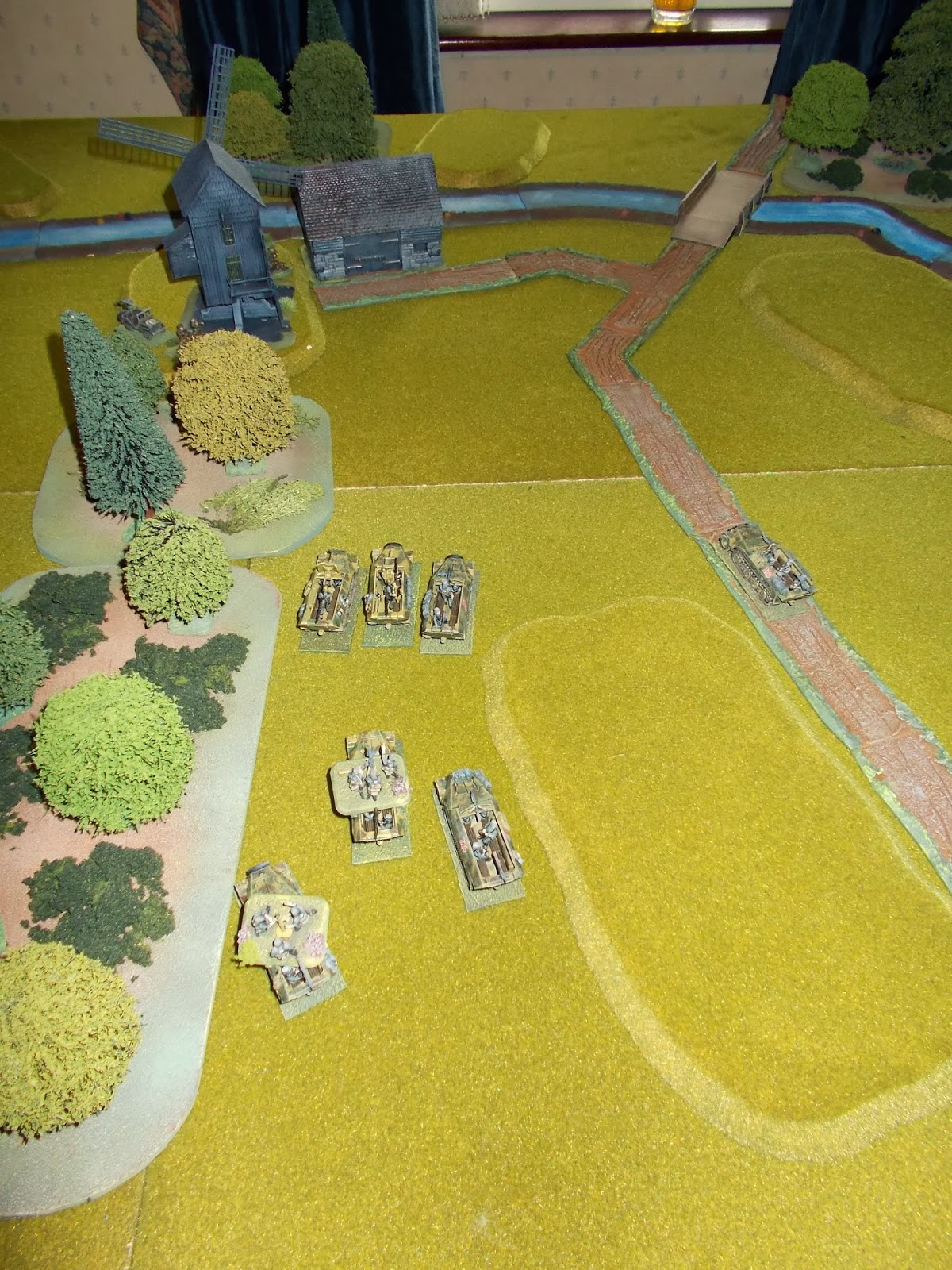 However, on my right flank the Marders exchanged fire with his 57mm AT gun, I came off worse, losing one Marder immediately to accurate American fire! 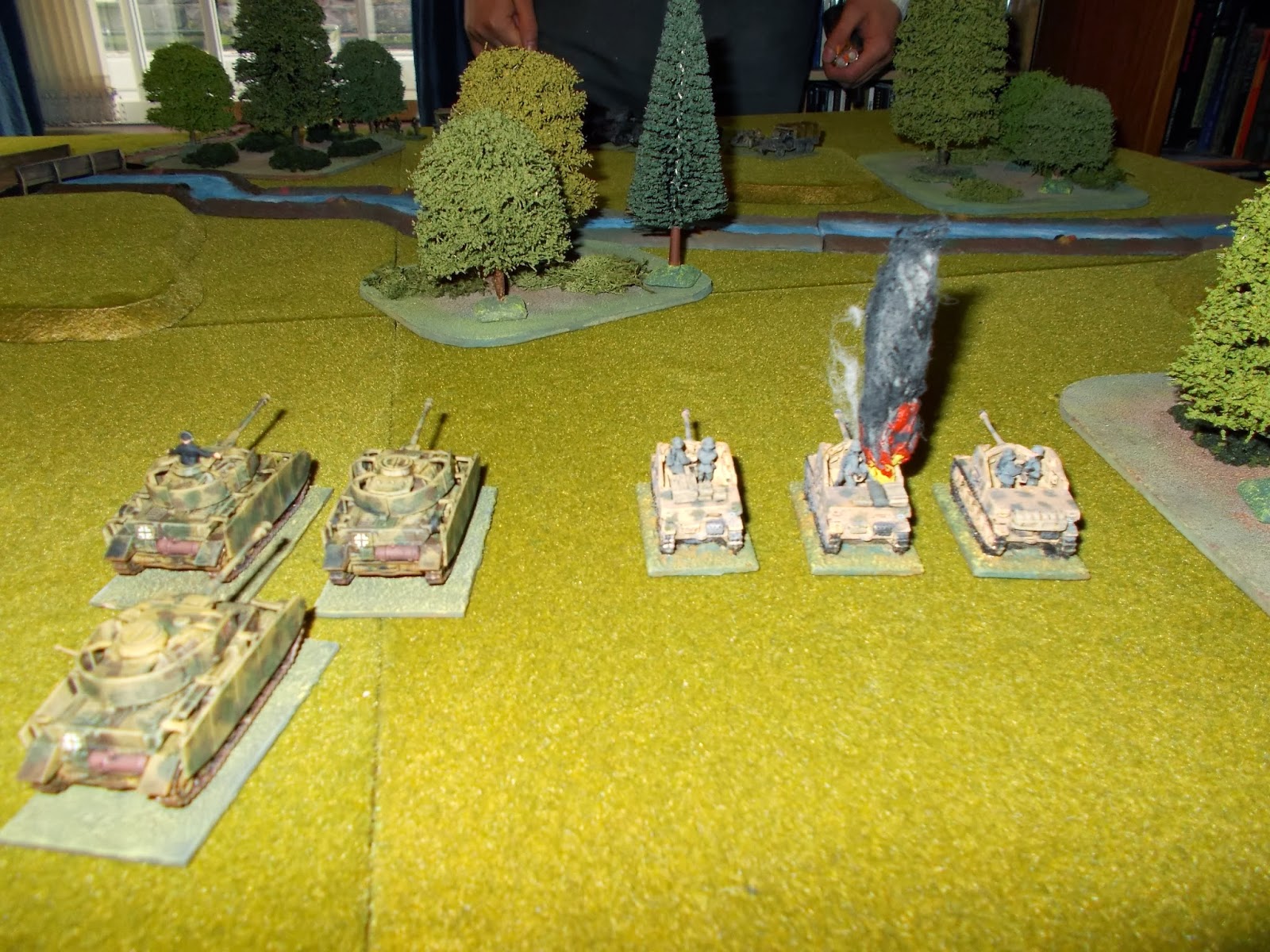 The view down his barrel: 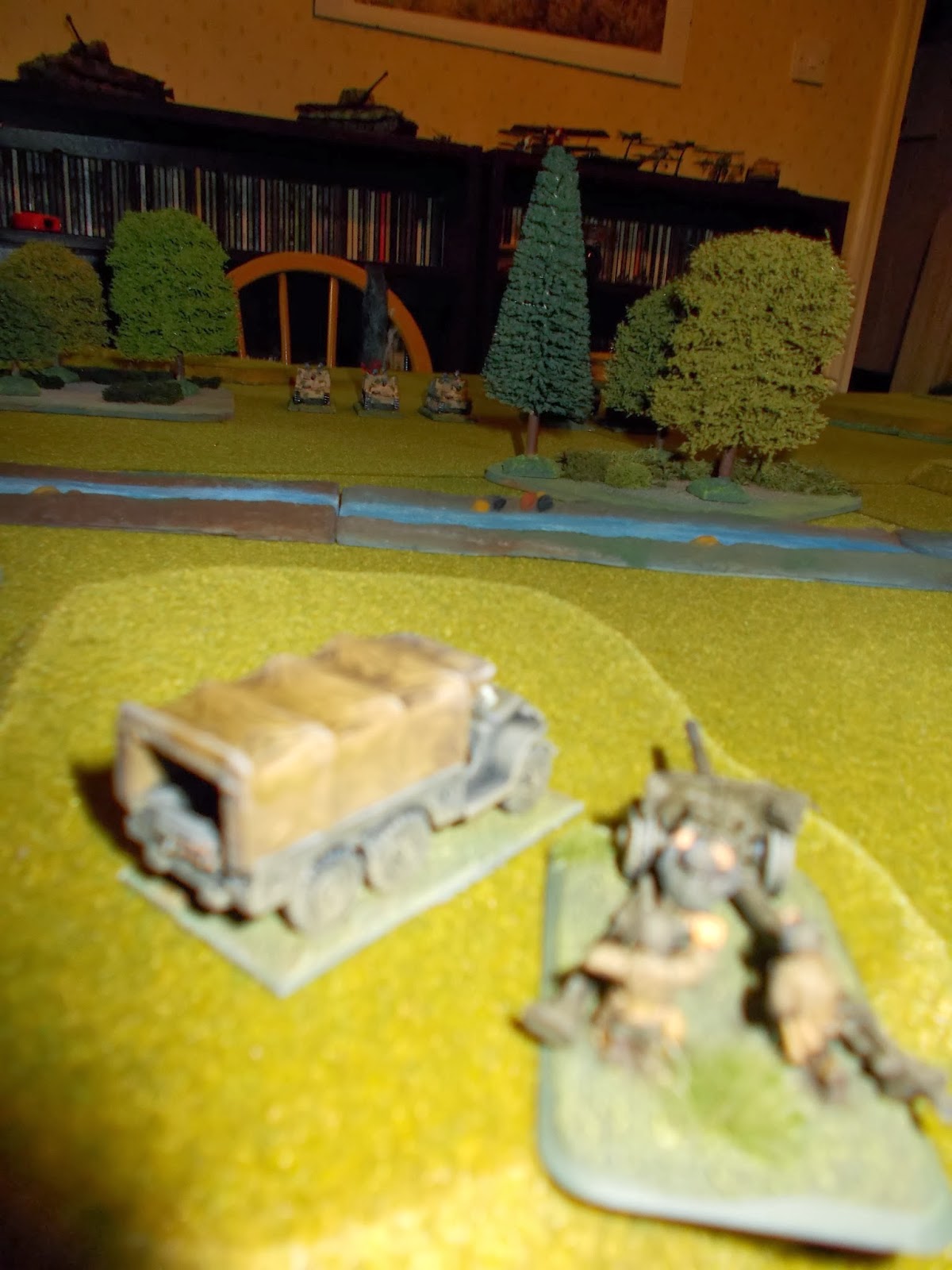 Dean's overall plan was to use his Shermans as the hammer with his soldiers playing the part of the anvil, they swept around his right flank behind the woods and used their truck's speed to get them into position quickly. 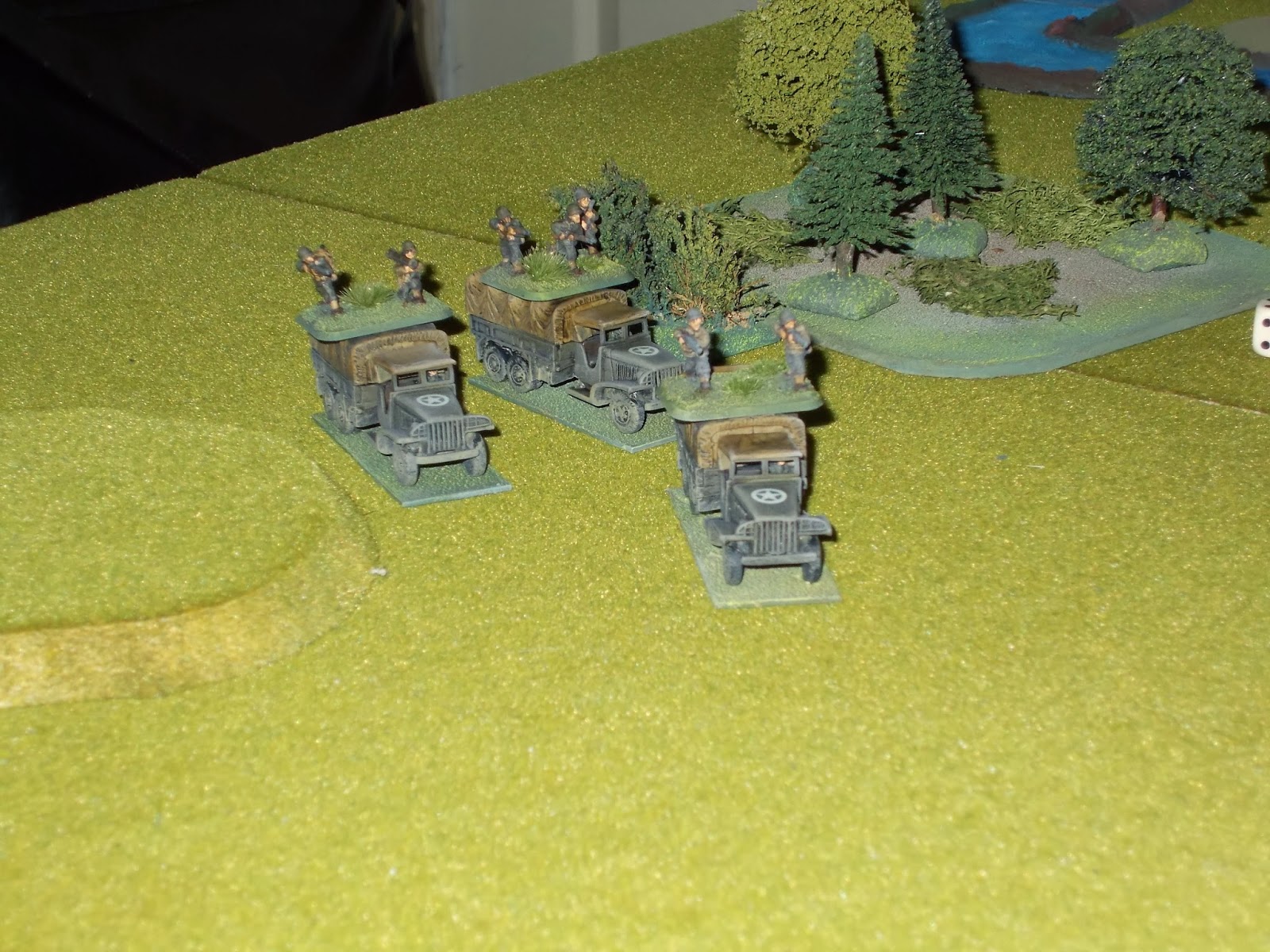 His Shermans advanced slowly towards the river and exchanged fire with my Panzer IVs, I scored two hits but only caused damage to one of his tanks. Meanwhile another Marder brewed up under more intense fire from the 57mm. Things were not looking so good for me on my right... 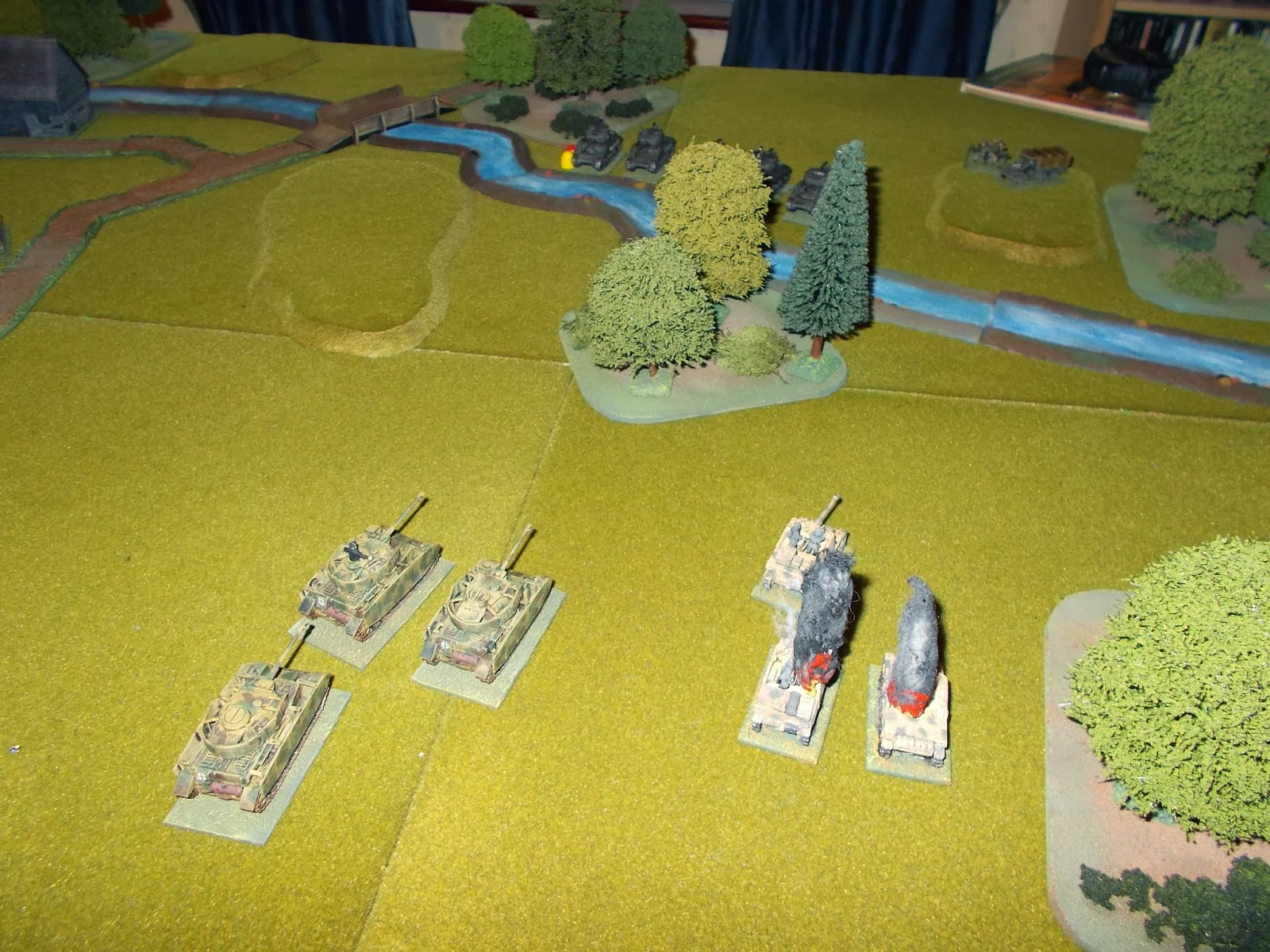 My attack in the centre was proving to be better going, however, I was laying down fire on his .50 Cal, .30 Cal and 81mm Mortar and inched forward to the objective. 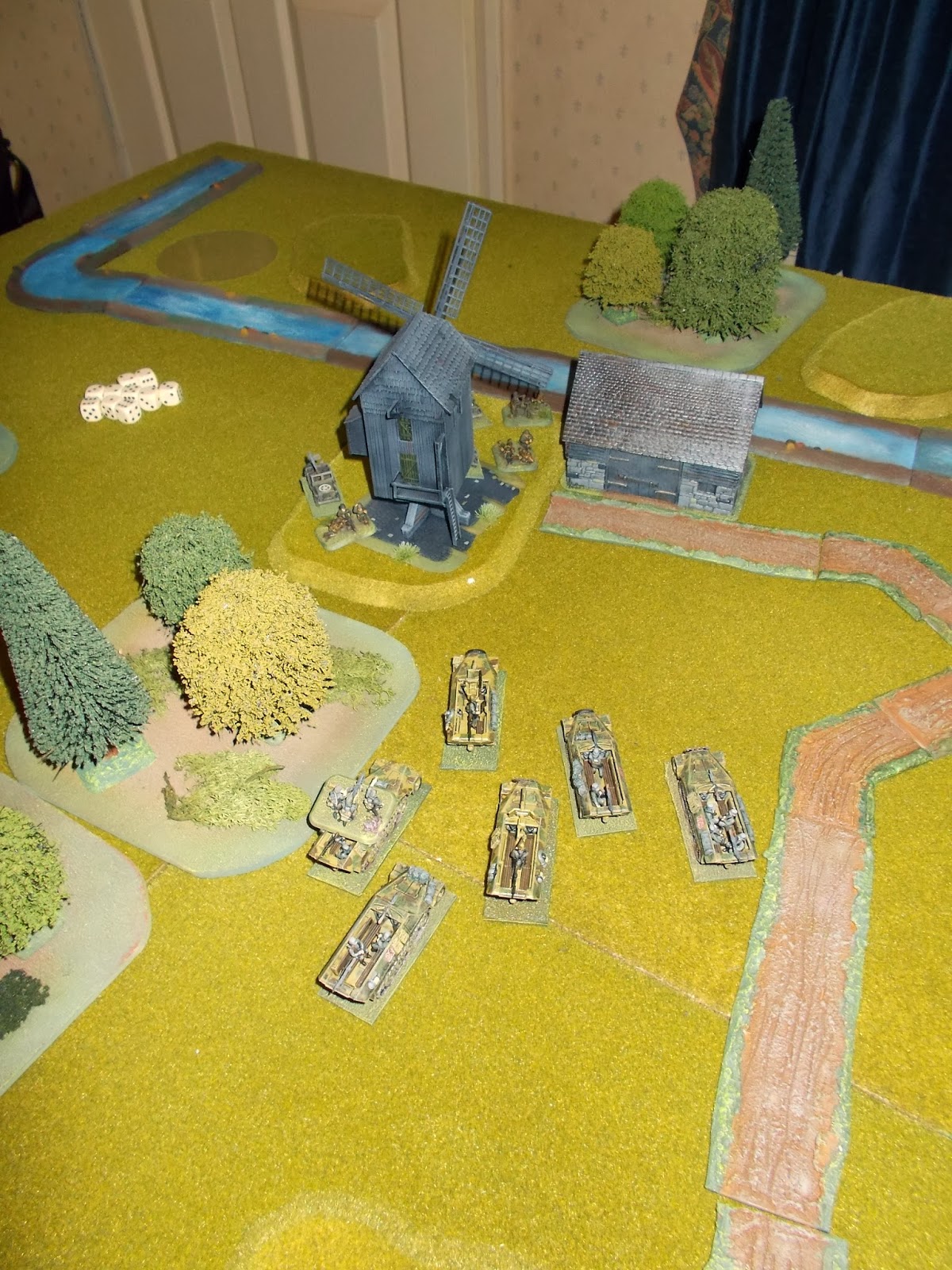 YANKS ON THE FLANKS! His troops dismounted from their trucks and started working their way towards the cover of the woods. It seemed like I was being outflanked! 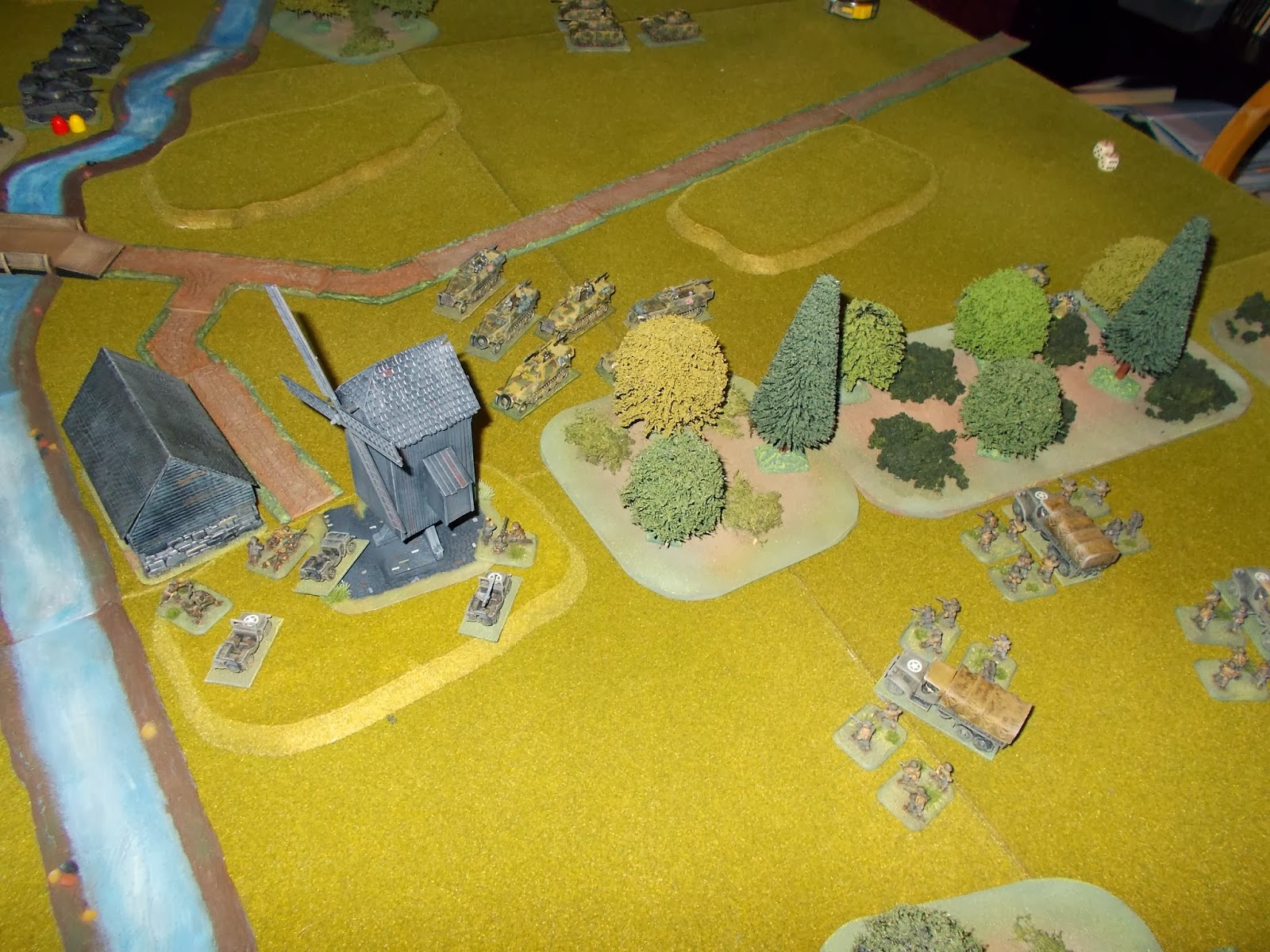 I immediately debussed my 81mm mortar, ready to give supporting fire to the central attack. I thought it would be better to use the cover of the woods for this, even though it was close to the Americans coming through the woods on the other side. 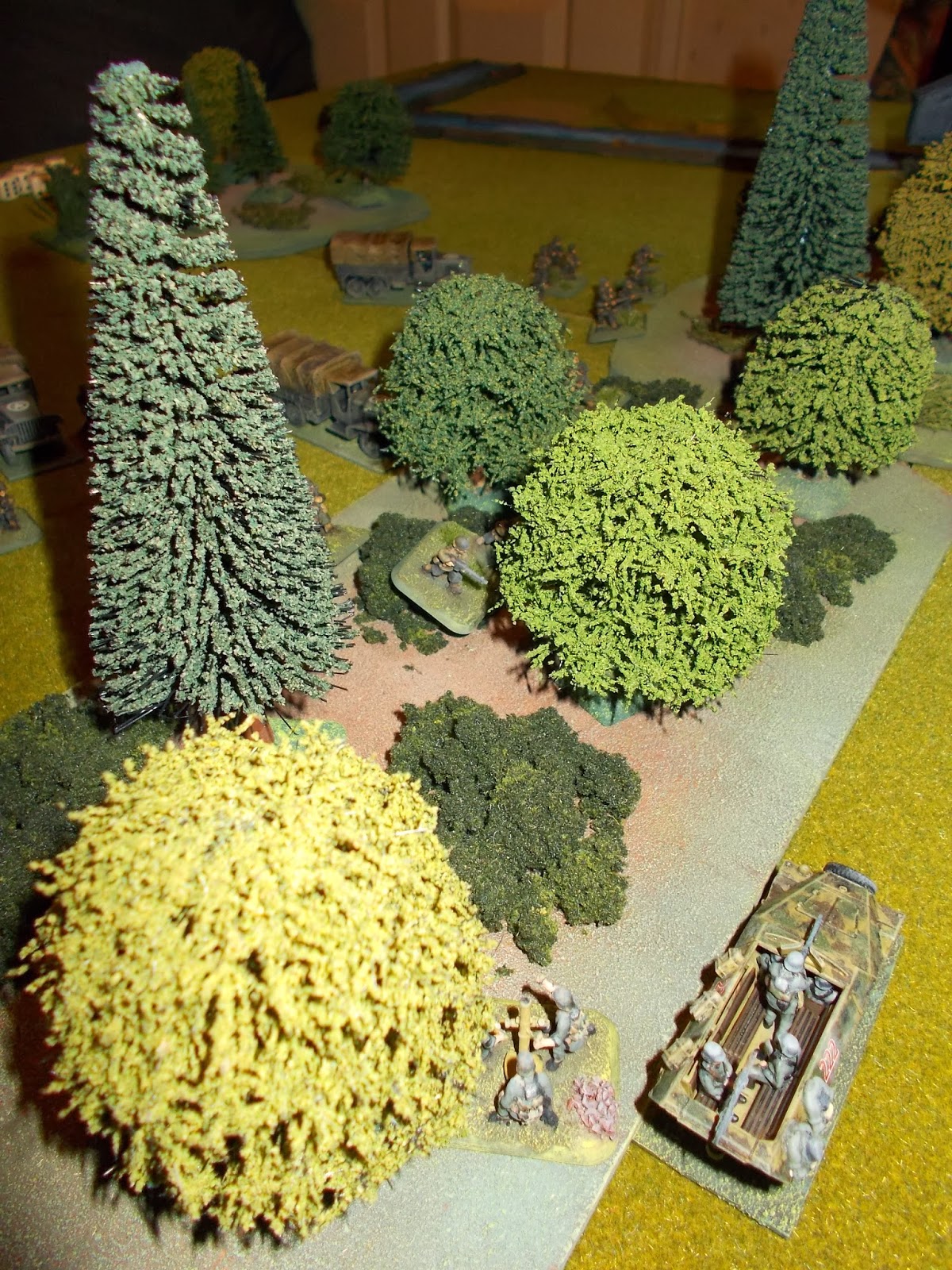 Speaking of which, the Americans were making their way into the trees, this was a great use of cover on their part and was quite alarming from my point of view. 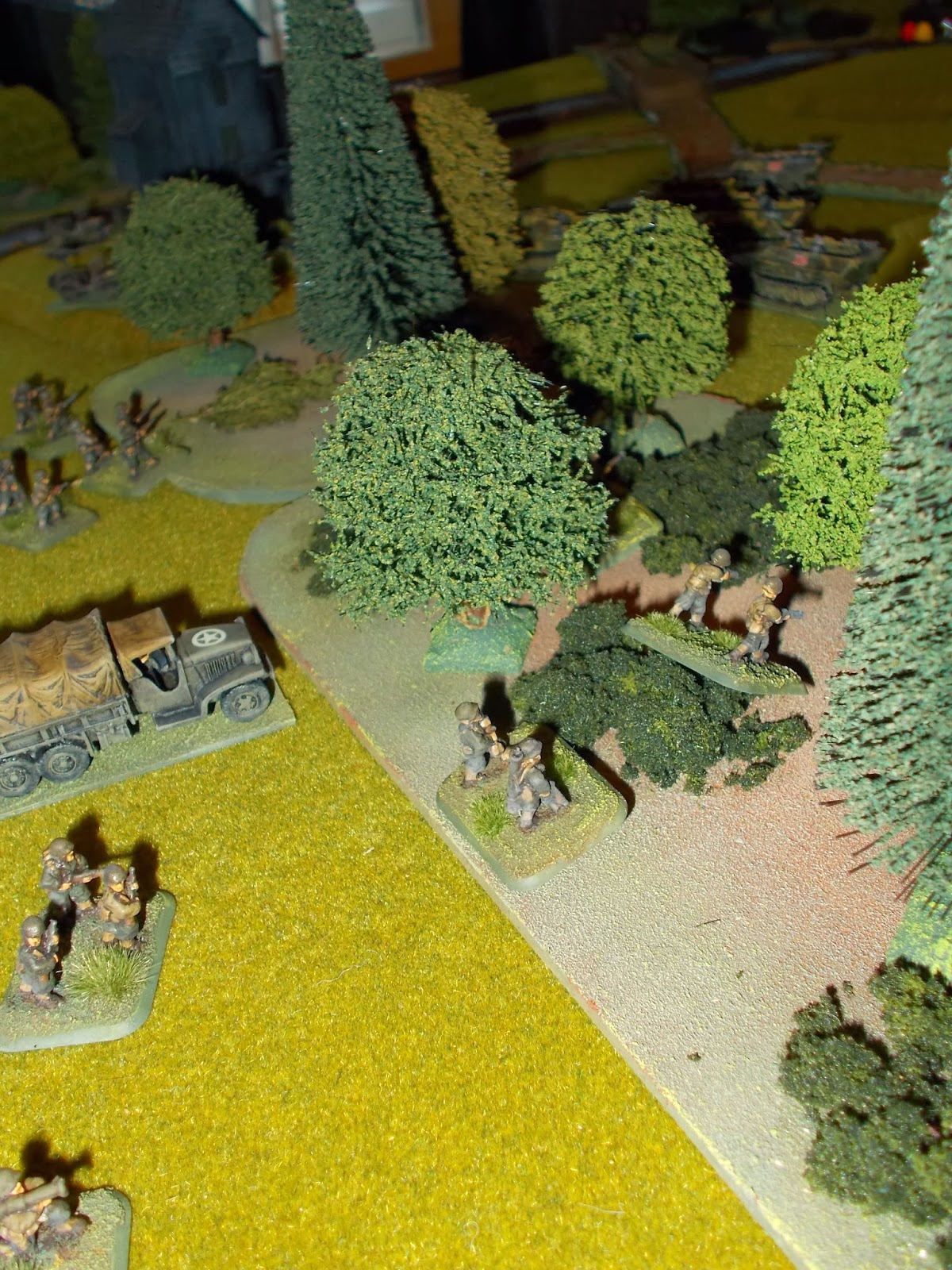 YANK TANKS ON THE FLANKS!! The Shermans crossed the river, but hugged the woods as cover. 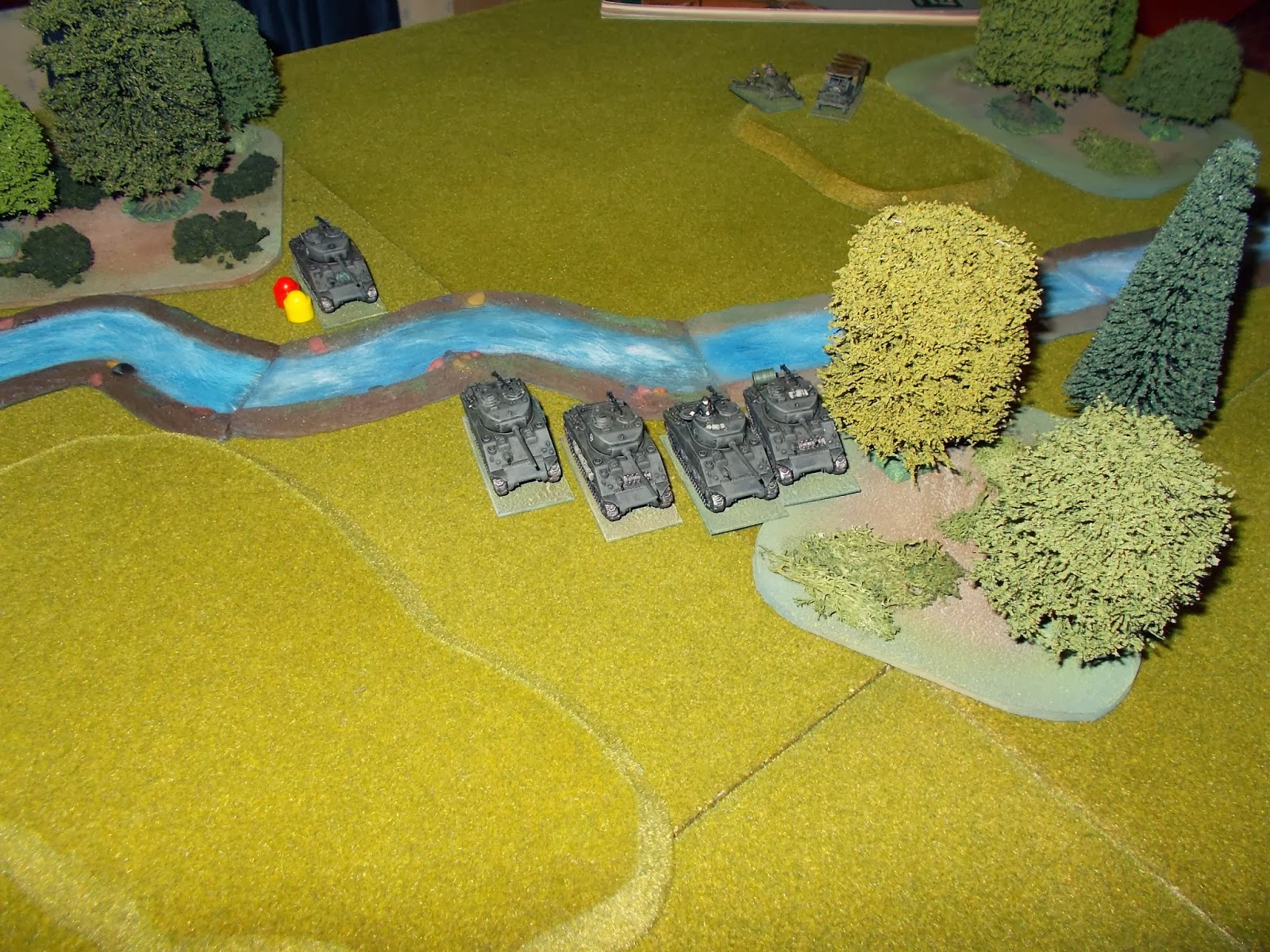 At the same time, my remaining Marder failed his morale test and routed off table, a Panzer IV took heavy damage in an exchange of fire with the Shermans and things were looking bad for me on this flank. 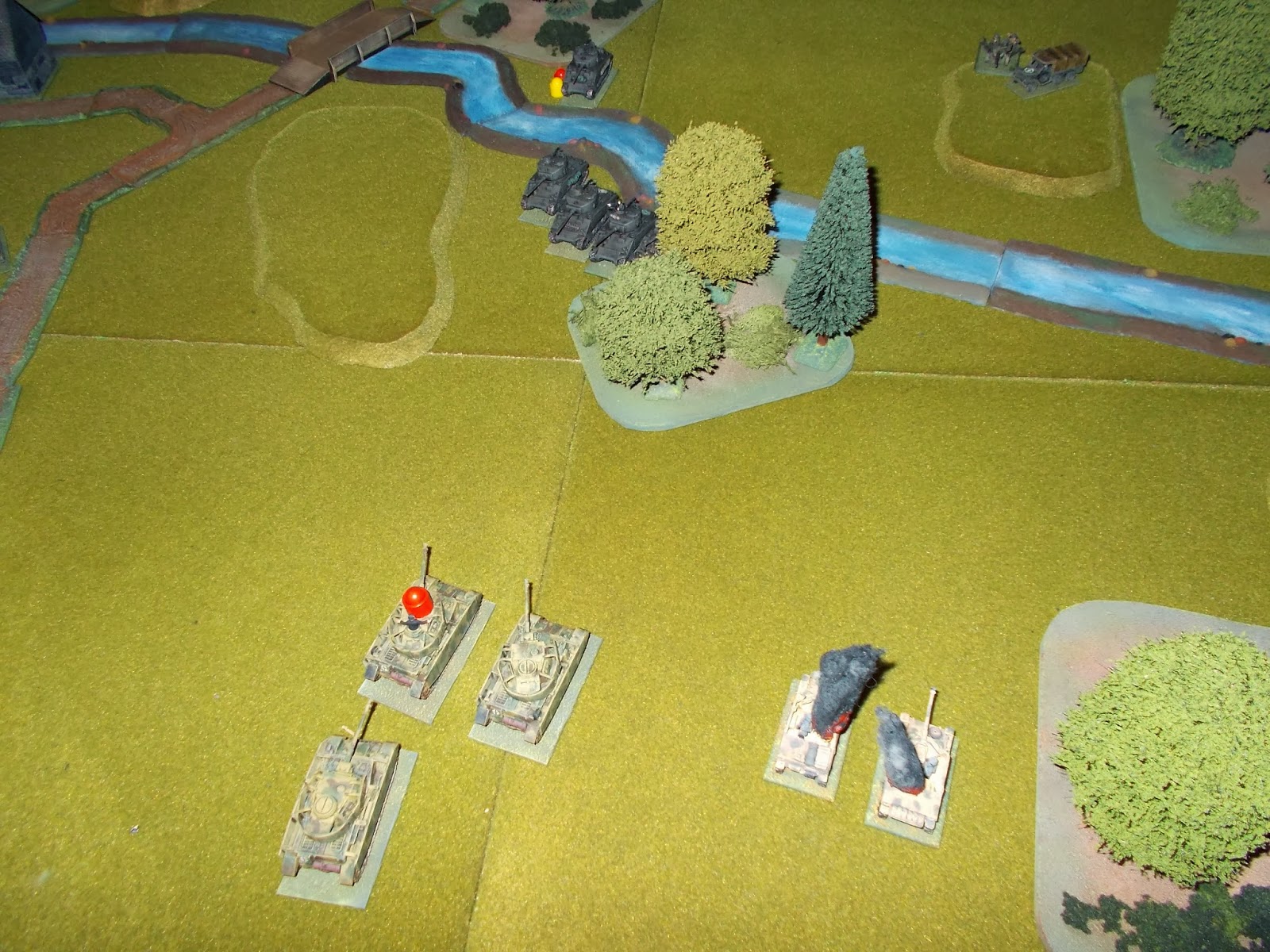 Pressing forward my attack on the windmill I was causing casualties on the American heavy weapons. I debussed a company of Grenadiers into the barn for cover and they were joined by the HQ. I knew it was going to be difficult for him to shift these defenders out of the buildings now. 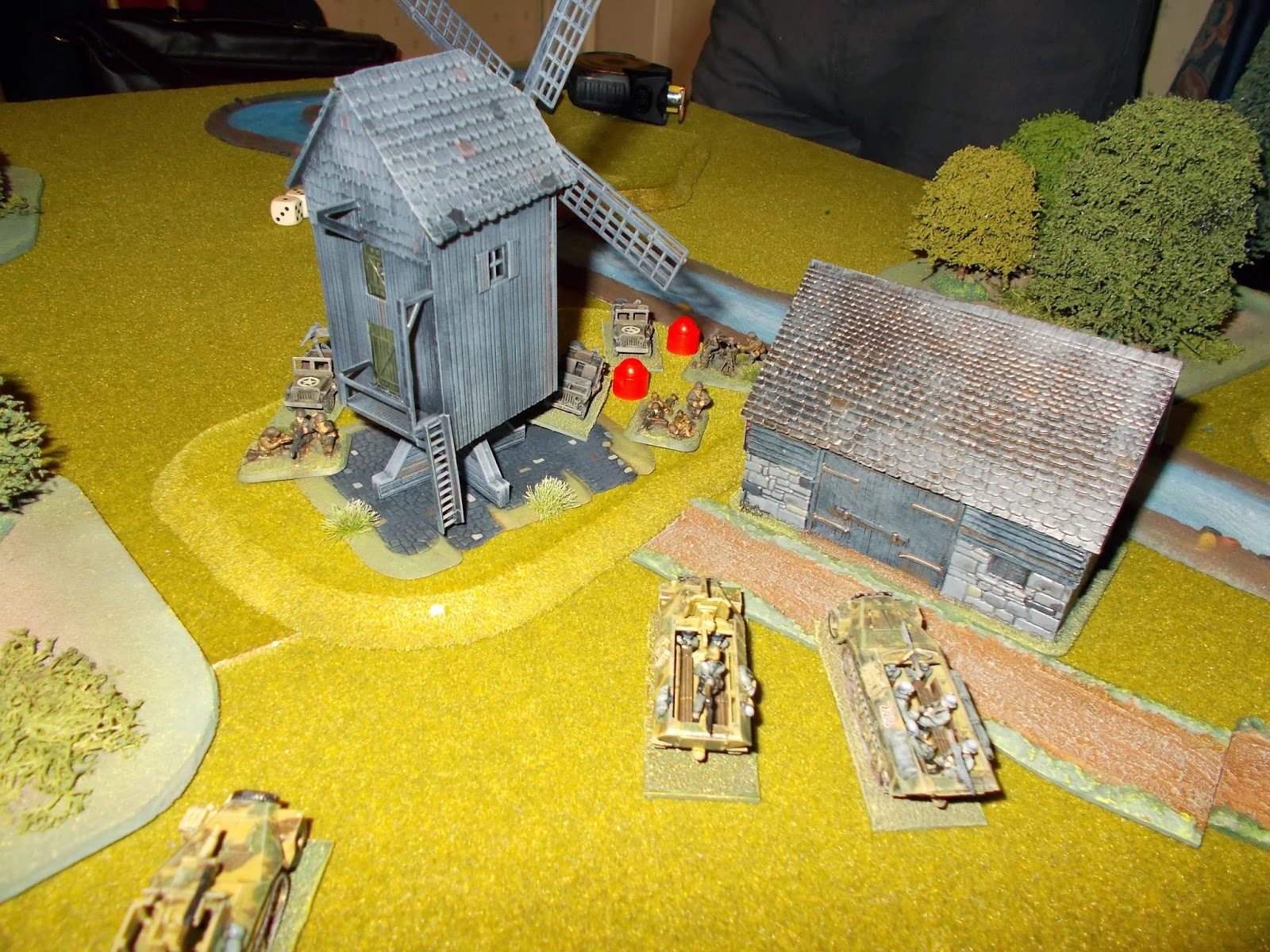 The game switched on a penny, his formerly brave Shermans failed their morale test thanks to one of my Panzer IVs damaging another of his tanks. They turned tail and routed off table and his left flank was wide open for exploitation! 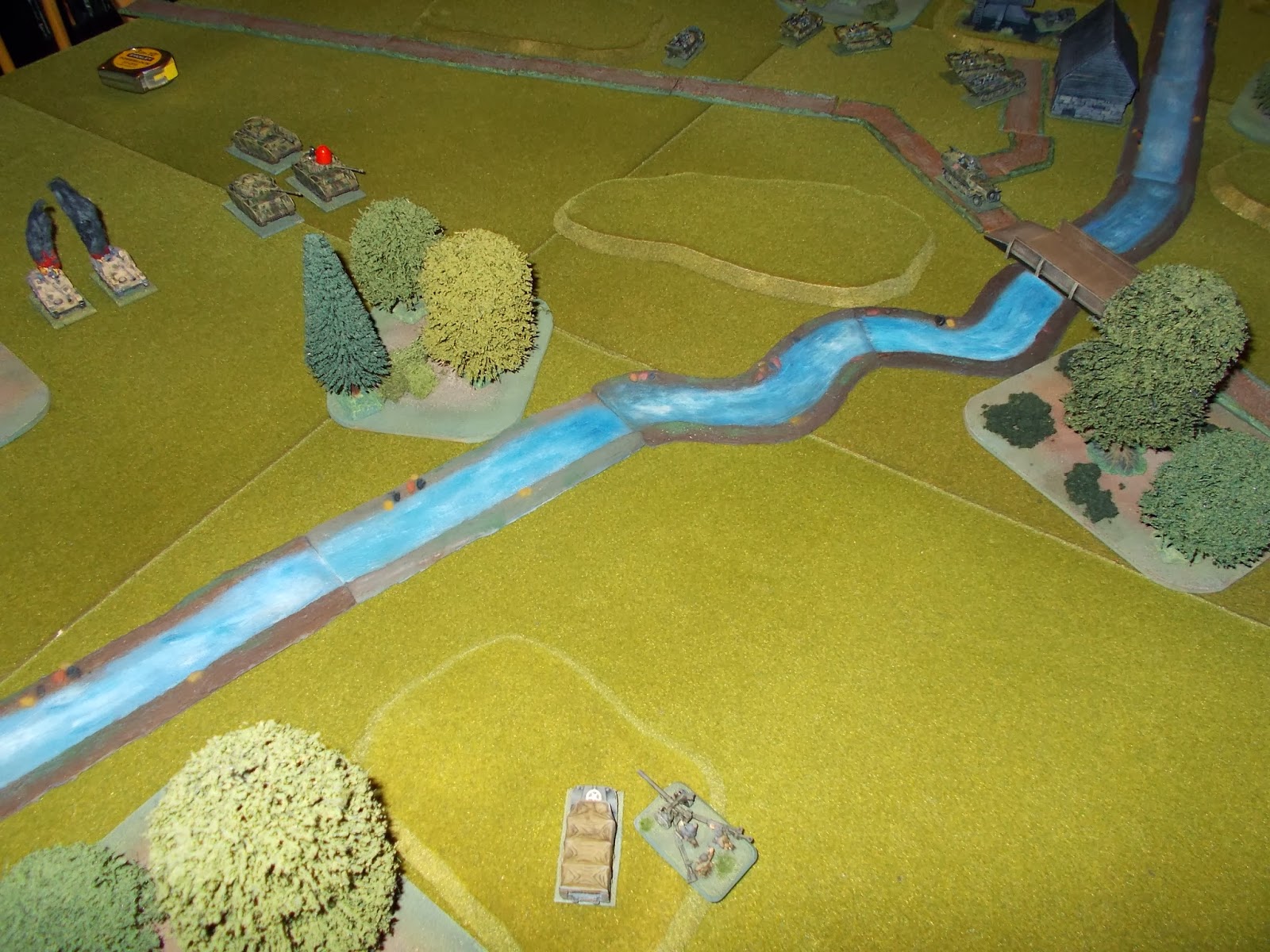 The 57mm was watching the approach to the bridge now and fired a shot at one of my halftracks. Fortunately for me this shot was unsuccessful and I was able to harass his HQ, who were positioned over the bridge behind the woods. 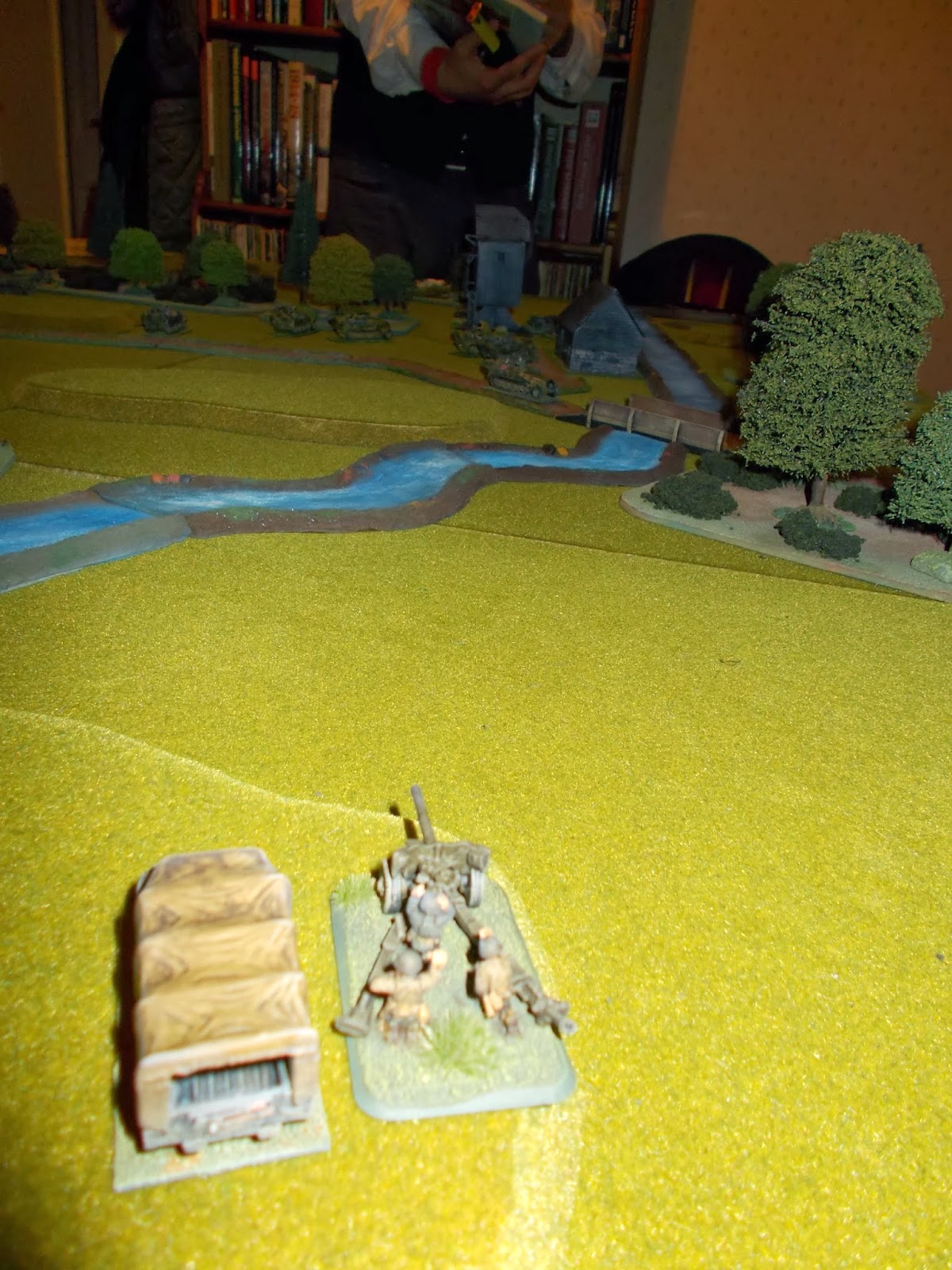 The firefight around the woods and windmill was intensifying but the Americans were losing more men, yet inflicting very few casualties on my attackers. 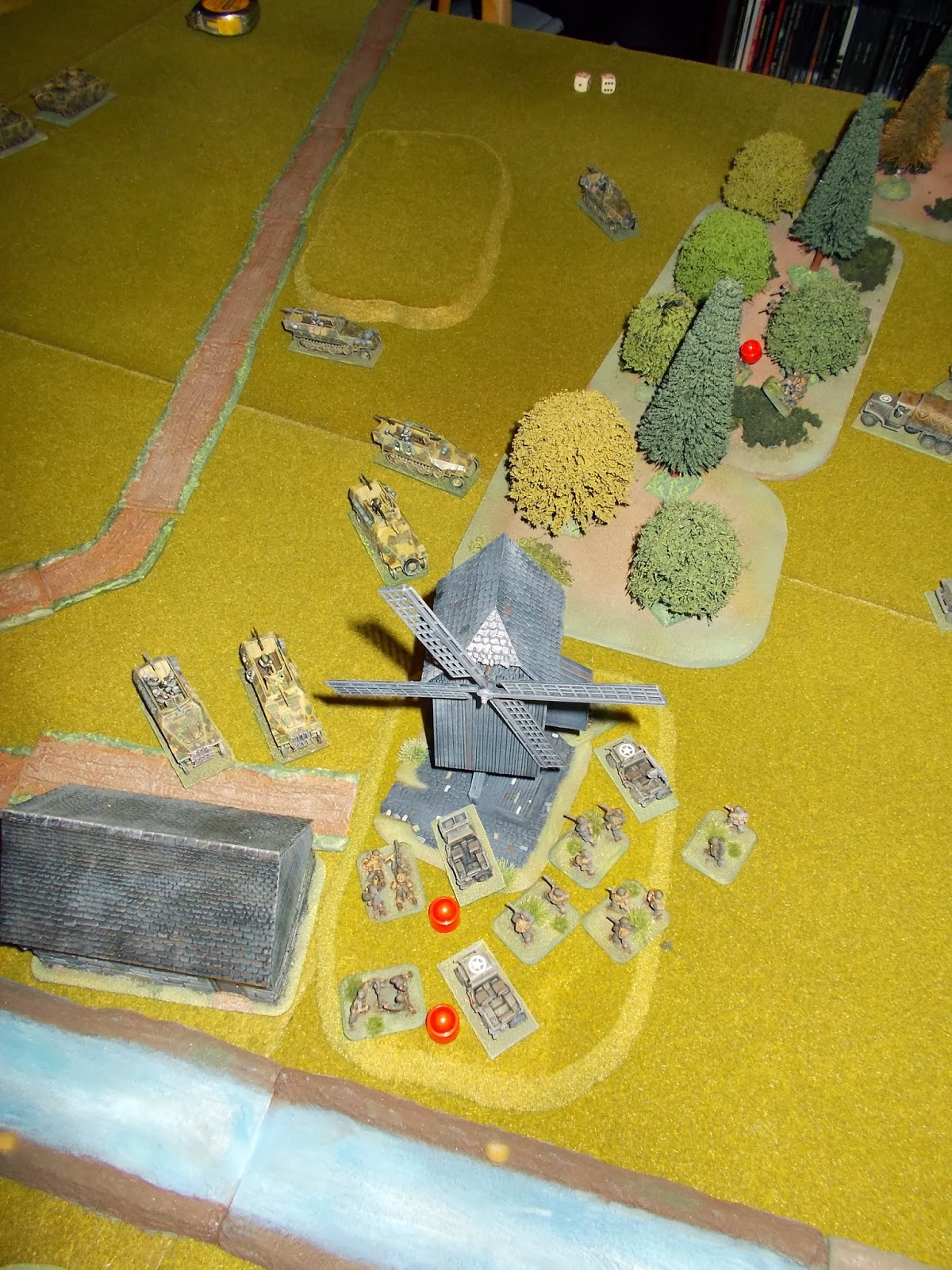 A bazooka team emerged from the woods to take a shot at one of my halftracks. Unfortunately for them the shot missed and I was able to lay down some machine gun fire from the vehicle. 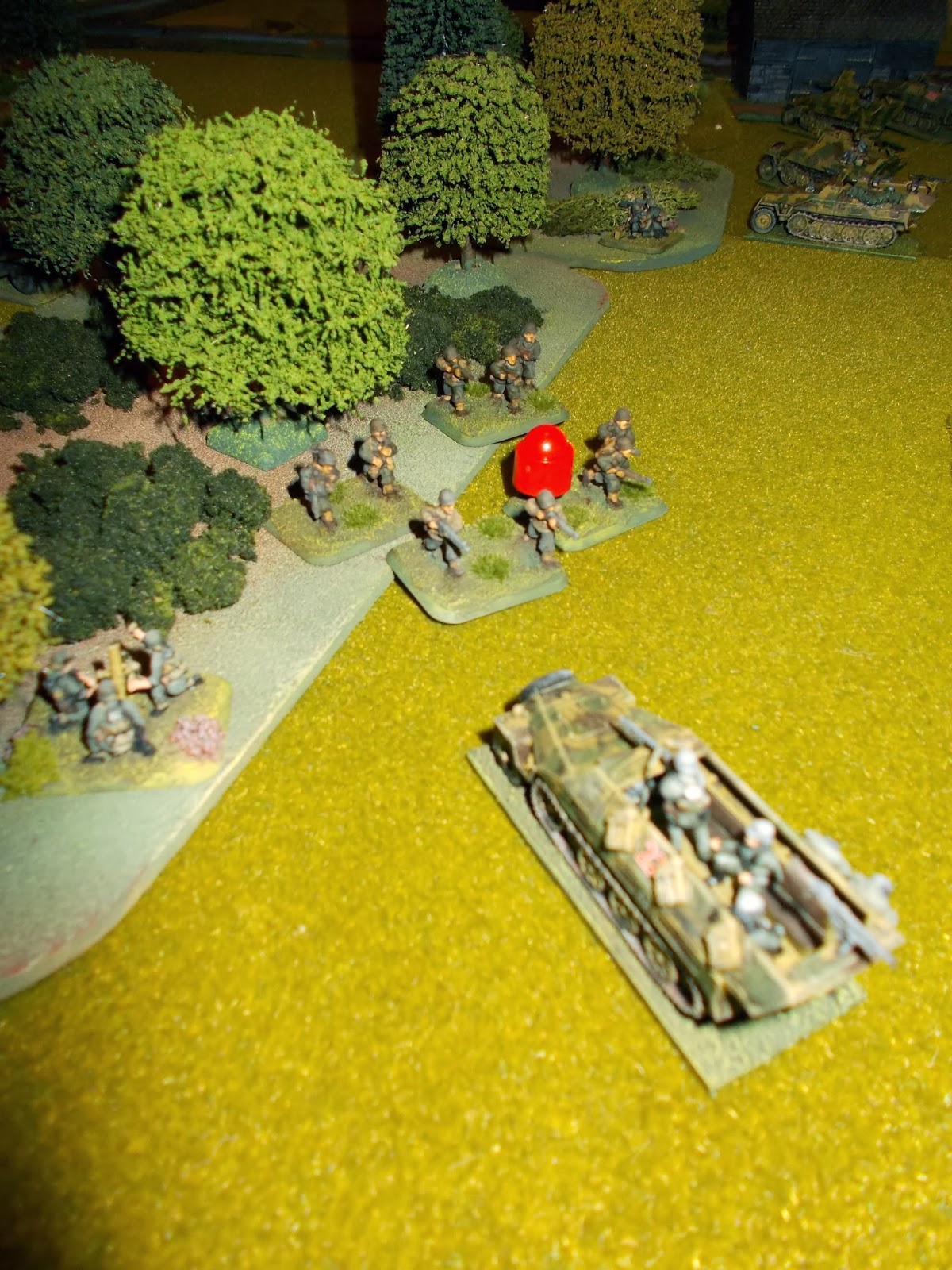 The 57mm took another shot at the halftrack on the bridge, which had been firing at the American HQ, this time the shot brewed up the vehicle and caused three casualties on the passengers. 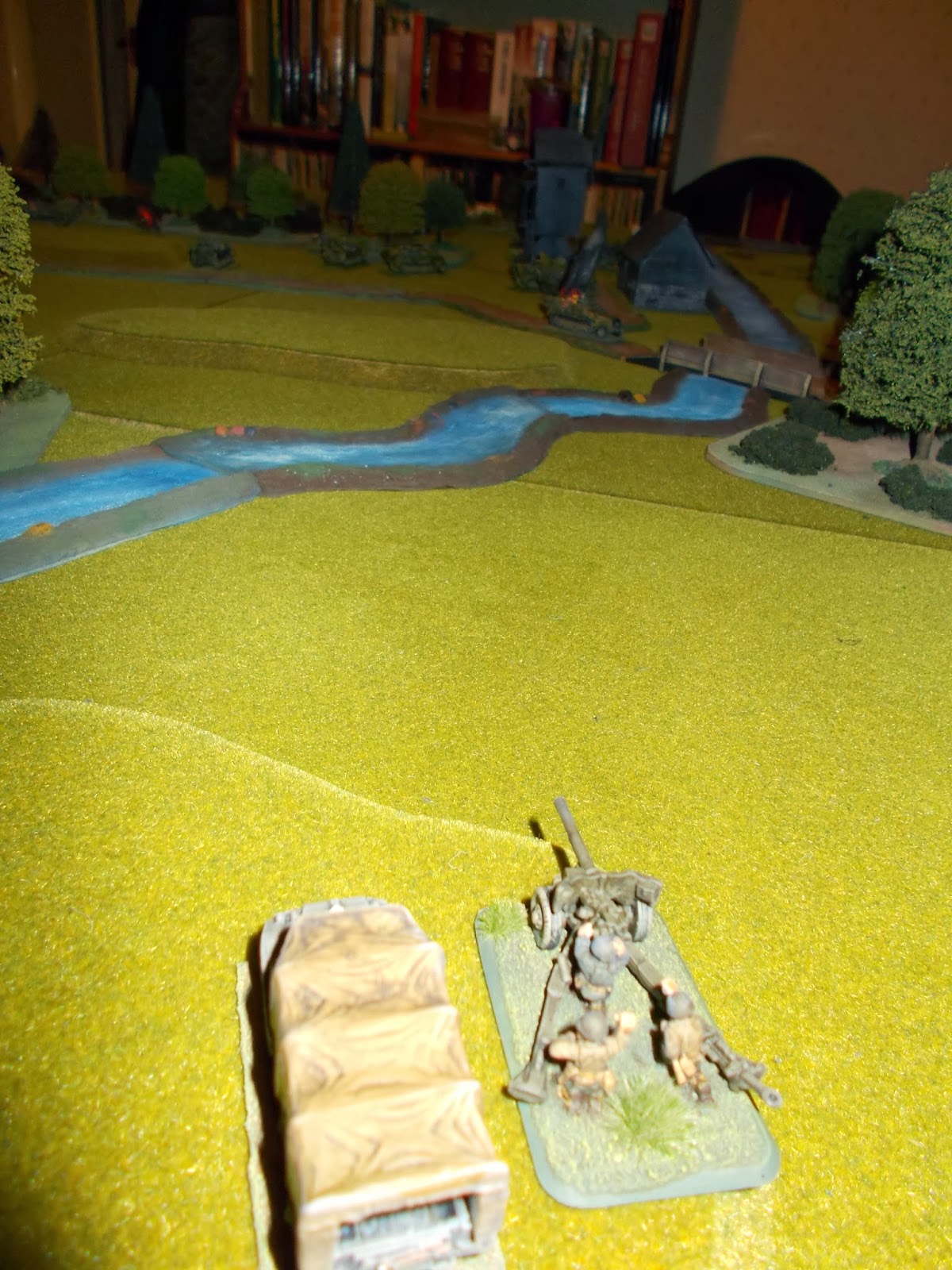 The remaining soldiers quickly debussed from the burning wreck. 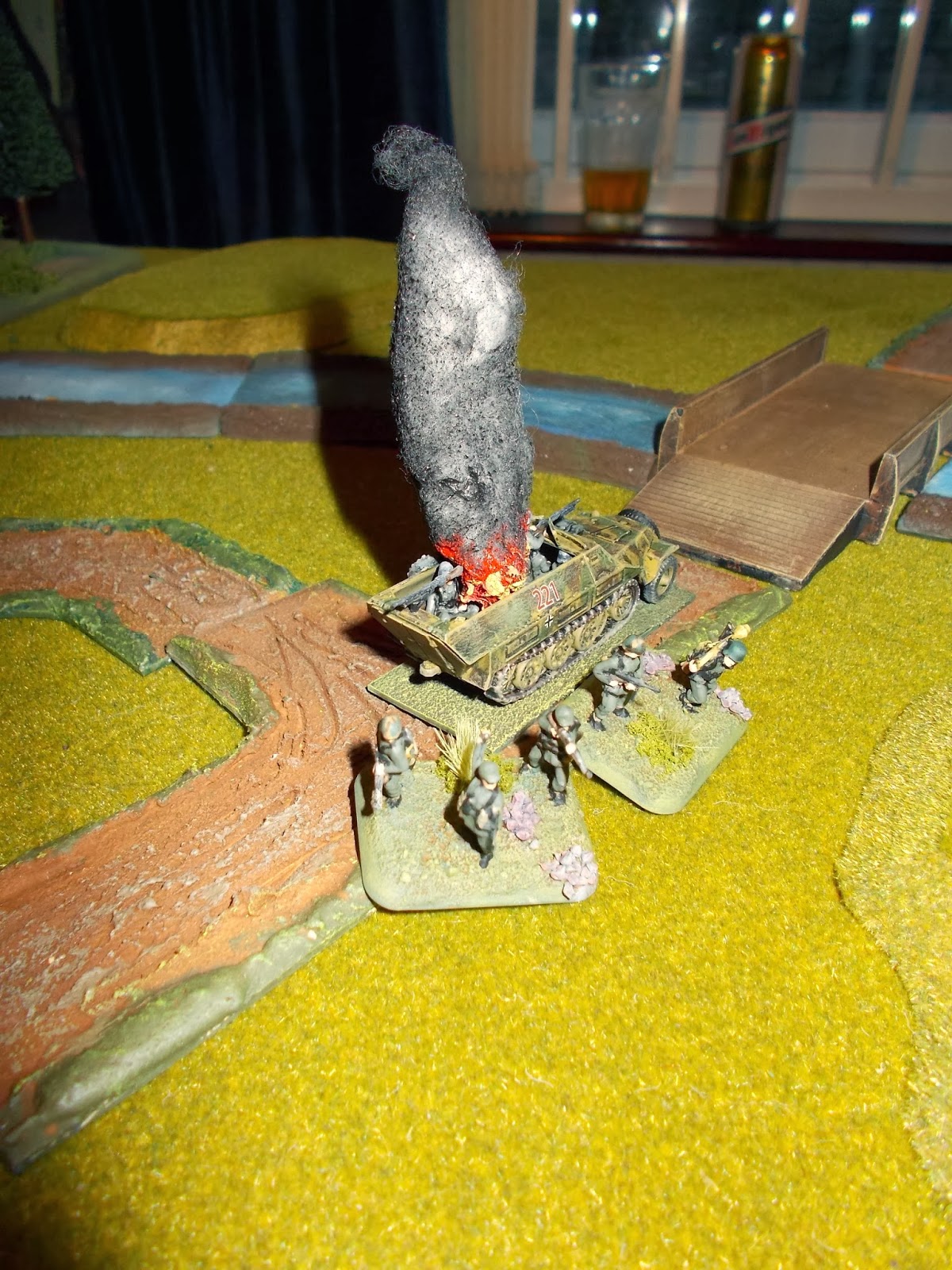 More and more Americans were getting chewed up by my machine guns, they were caught in crossfires from infantry and vehicles. On top of this I started to steer my Panzer IVs towards their defensive positions. 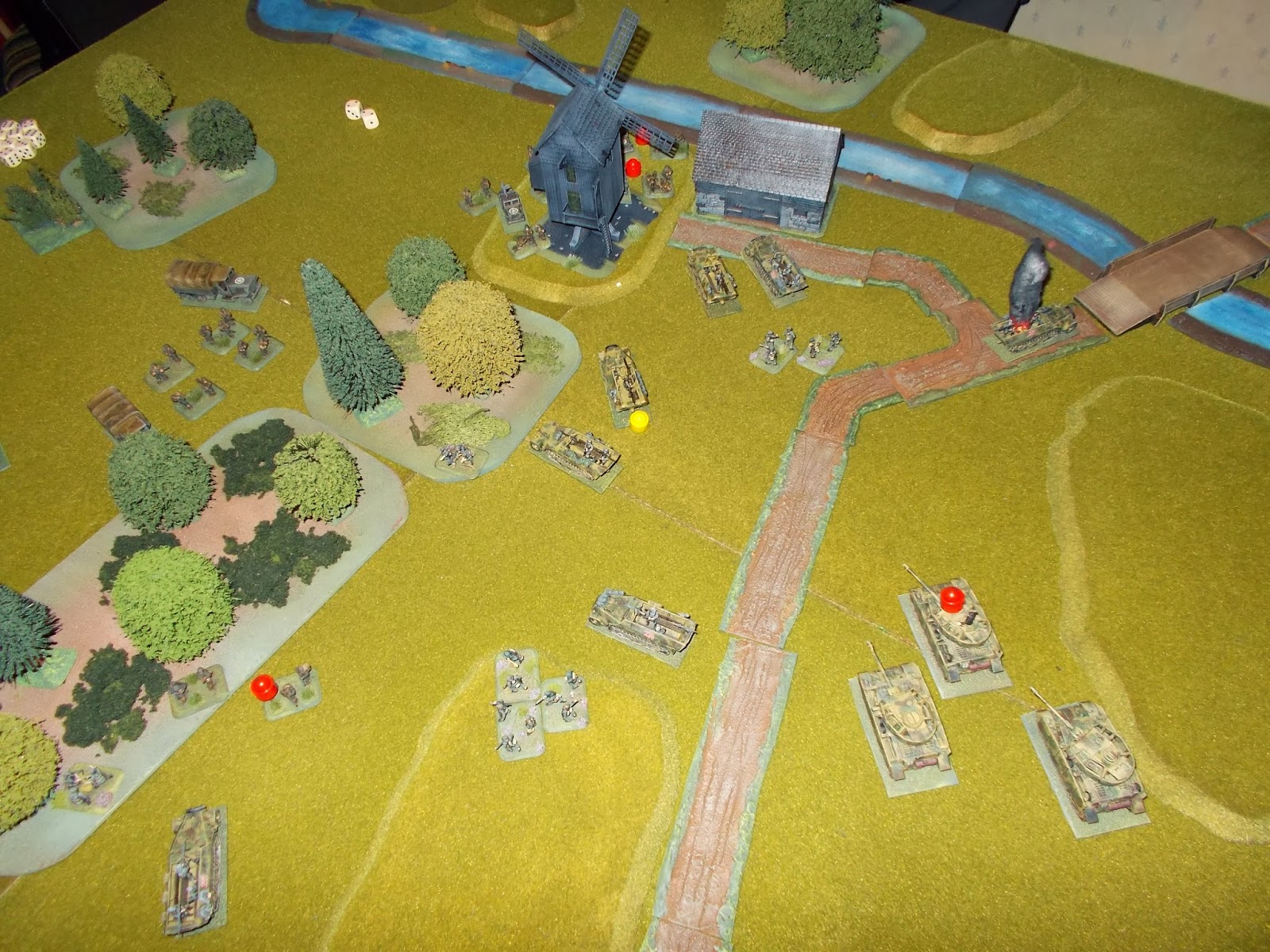 The unfortunate bazooka team were cut down by fire from three directions. 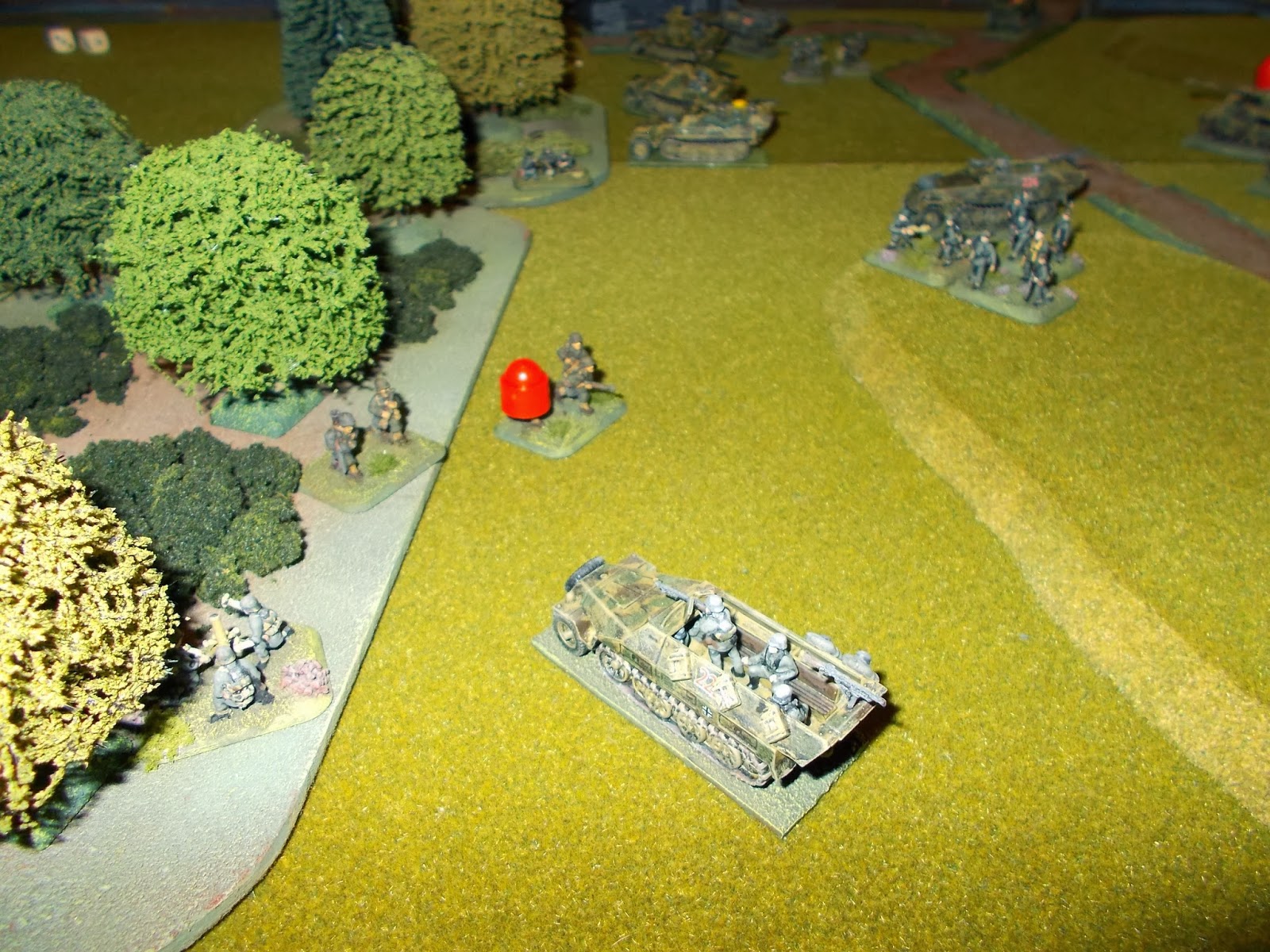 And accurate German fire from the halftracks, infantry and tanks destroyed most of the soldiers holding the windmill. 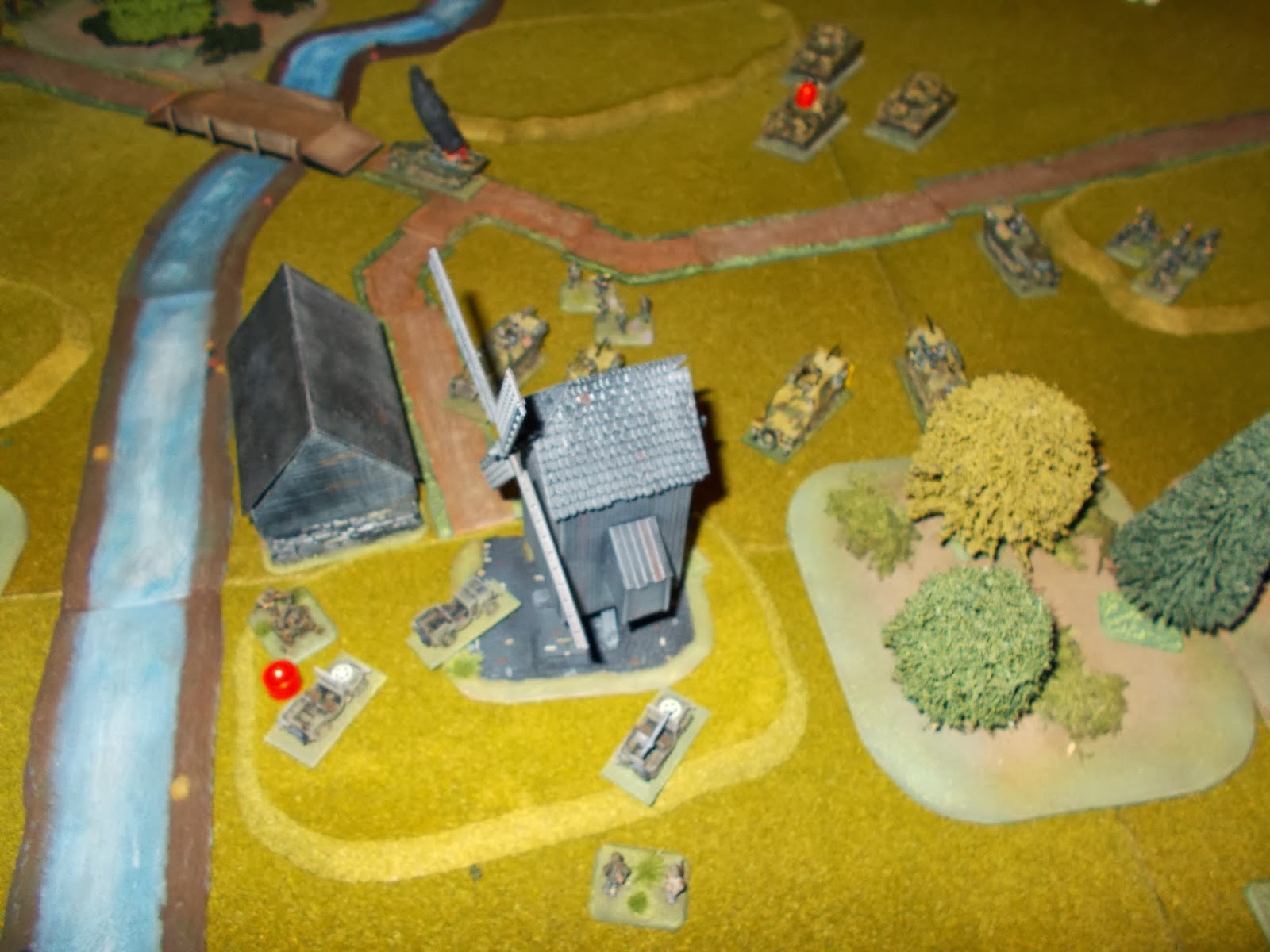 With this, Dean conceded the game, I had control of the table and he was rapidly losing men left, right and centre. The amount of casualties he had sustained had taken him above the amount to start testing for his morale so the defence was starting to look tenuous anyway. 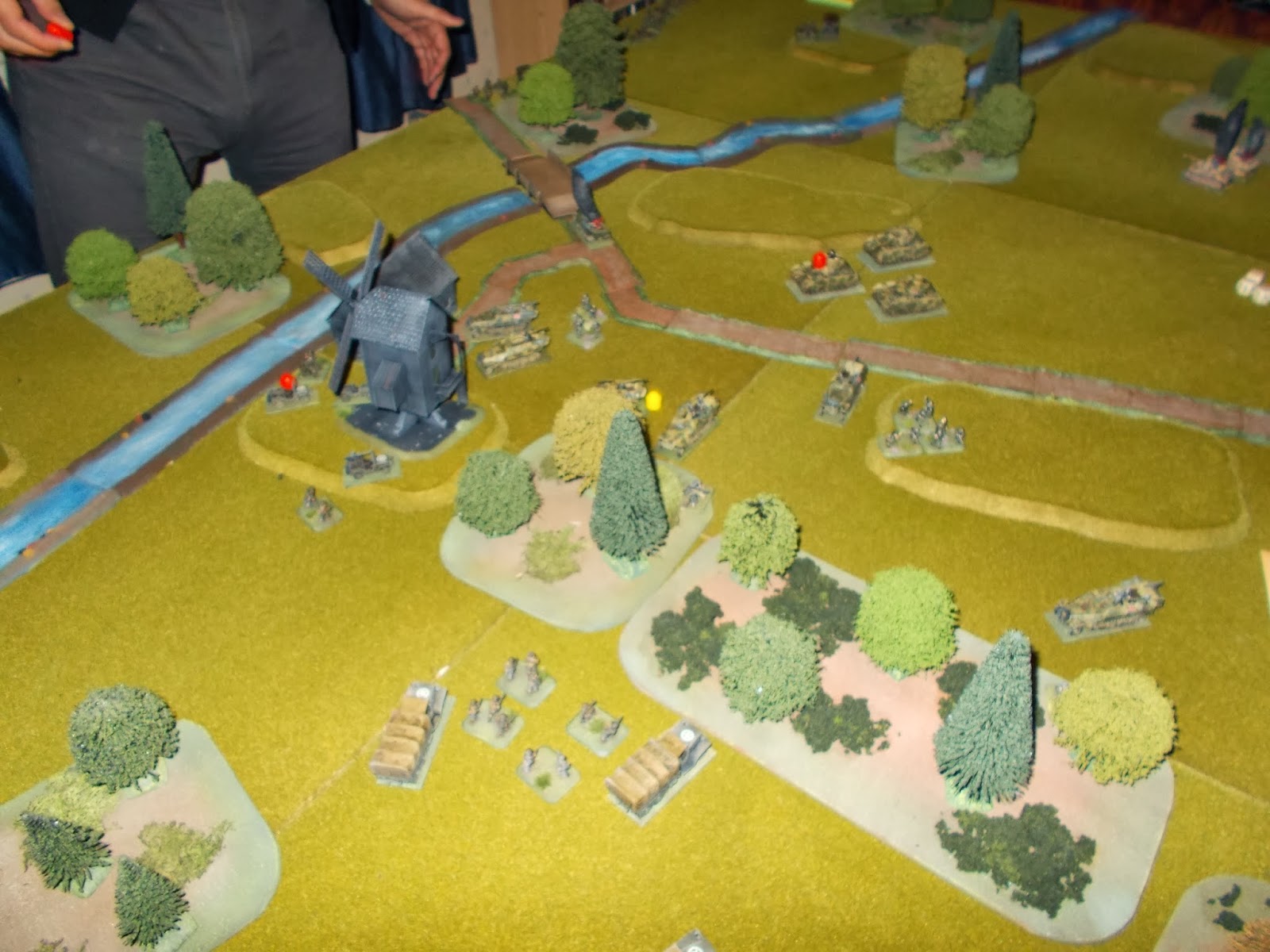 The final stage from the German lines, I had lost very little overall, about six infantry and a half track. This didn't include the three Marders that I lost earlier. 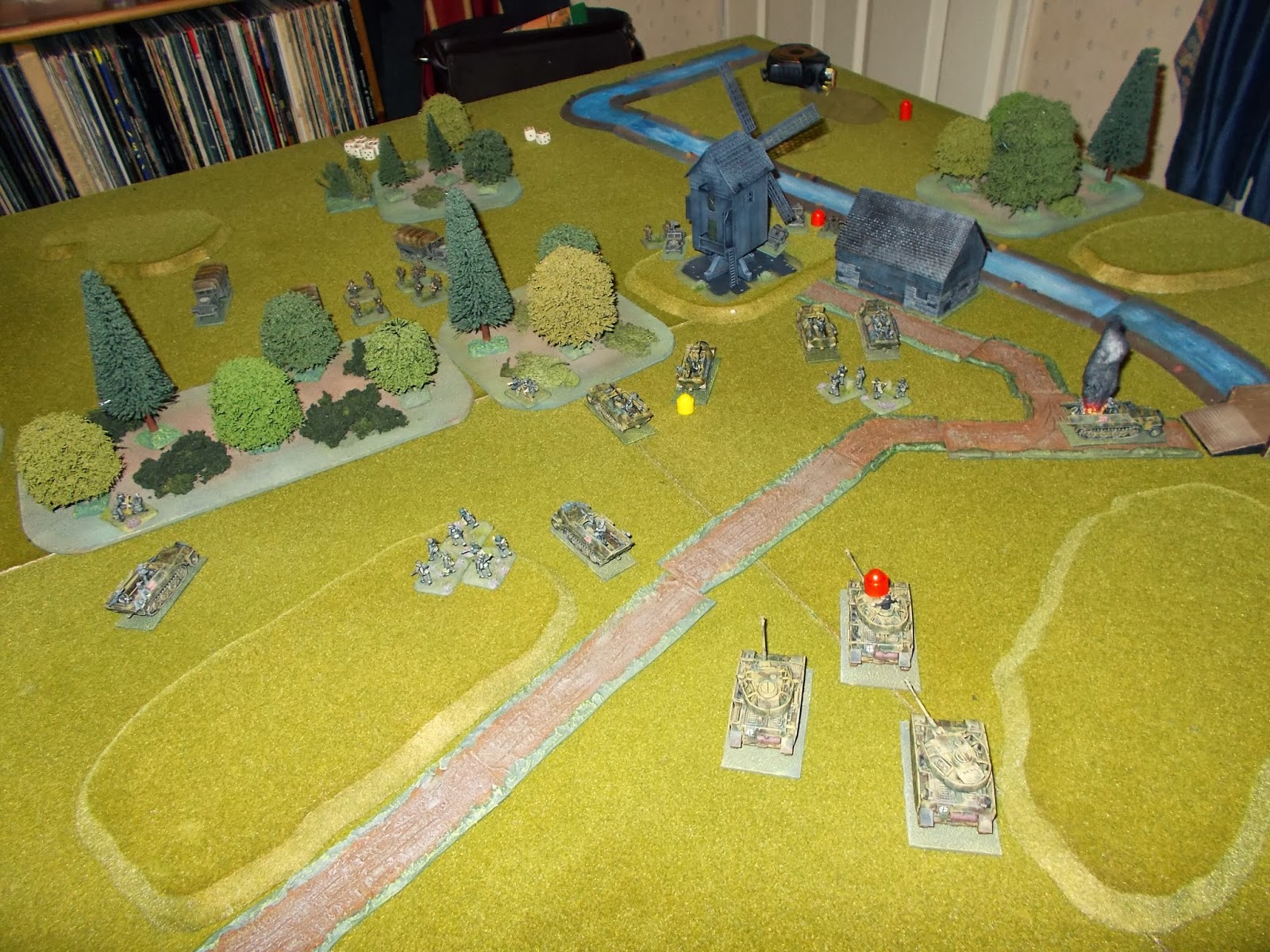 It was a good game, I thought I was going to be a loss for me when the Marders ran from the field, but the Shermans disappearing seemed to be the swinging point that went in my favour. Dean's initial plan involved a pincer attack as a defence, which would have probably worked if his Shermans had been more successful and remained on the field.

The man of the match, however, was the American 57mm AT gun which destroyed a halftrack and two Marders, forcing the final one to flee.
Labels: 15mm AAR American Germans Rapid Fire WW2