Squadron Leader Dean called over on Sunday for a game of Wings of Glory, the scenario was based around the destruction of a Rumpler two-seater observation aircraft. This was to be accomplished by three Spad XIIs, with the Rumpler being protected by a Fokker Dr1 and two Albatross DVa. Dean took the Spads and I took the German forces.


The Rumpler was set up alone in the centre of the board with the German scouts on the edge of the board. If the Spads succeeded in destroying the Rumpler, they would win outright despite any losses of their own aircraft. 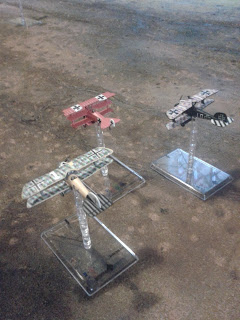 Dean was given a free hand to set up his attack and decided that two of the Spads would keep the German scouts busy whilst one took on the target Rumpler. 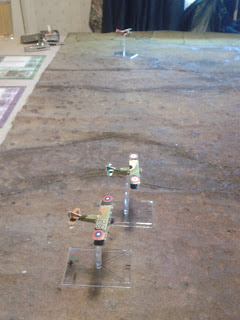 As the Spads began their attack run, I veered the Rumpler starboard with the aim of circling it until my scouts could get close enough for protection. 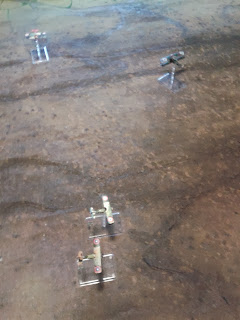 On my left flank I also aimed my scouts at the two Spads, this was to outnumber them and try to take down as many as possible before turning to protect the Rumpler. 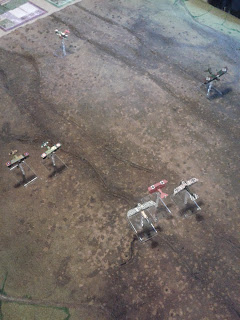 The initial clash was indecisive except for a lot of jammed guns on both sides. 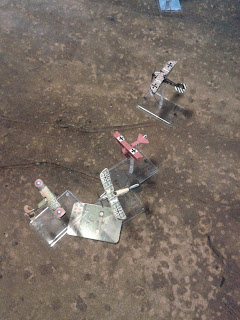 And then the two parties split apart, with the Rumpler still circling and keeping an eye out for potential attacks. 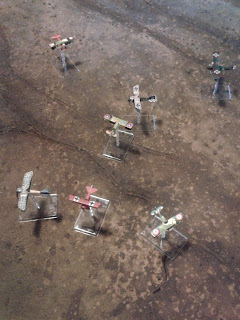 I'd split my forces too much and one Albatross burst into flames under the guns of one of Dean's crates, whilst another Spad was having a pop at the Rumpler. 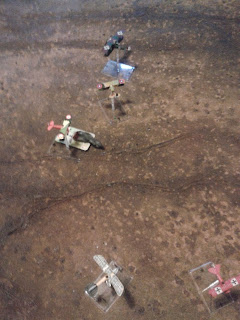 However, the other Albatross and the Fokker flipped over to return to the fight, whilst the Rumpler's rear guns blazed away at the attacking Spad! 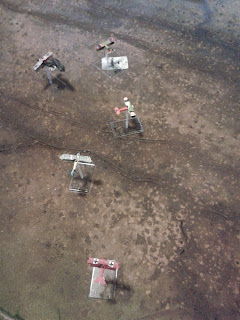 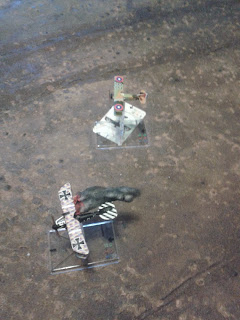 And blaze away he did, as Dean drew the explosion card and the unfortunate Spad went tumbling to the ground. 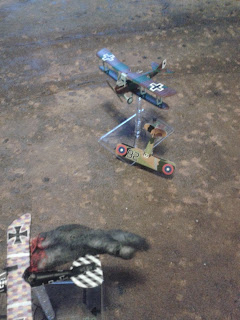 The Rumpler sought safety behind his protective scouts and made a getaway. 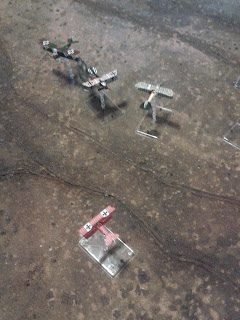 Luckily for me, the two Spads were both facing the wrong way to attack the two-seater and my scouts got shots at them. 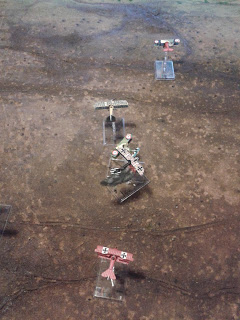 One Spad broke away and gave chase to the lumbering Rumpler, a lucky shot putting the observer out of action. 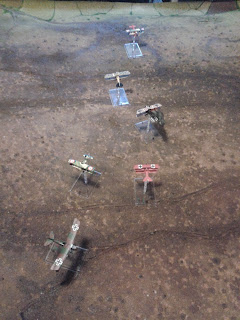 But my wolf-pack of scouts made mincemeat of the other Spad with some help of another explosion card. Two down, one to go. 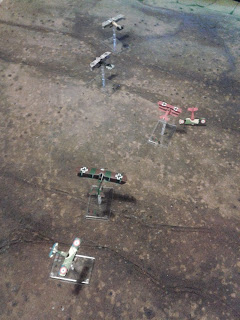 The Rumpler flew in tight turns as the pursuing Spad over shot his target, but frustratingly I couldn't shoot at him with no rear gunner. 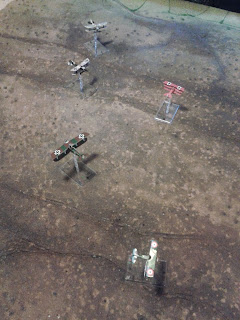 I tightened the formation of the scouts... 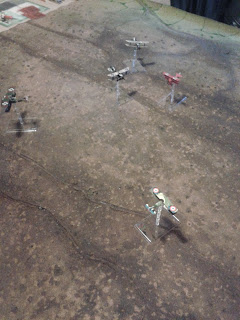 And the wolf-pack drew together again... 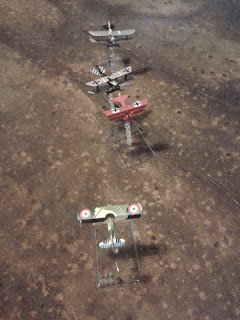 All guns blazing they bore down on the remaining Spad... 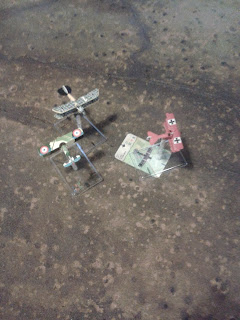 Which burst into flame then tumbled from the sky leaving a smokey trail. 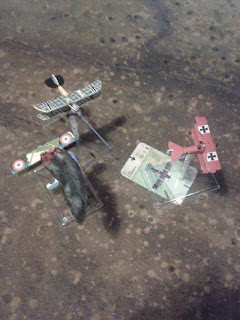 All of my pilots lived to tell of the day, except the observer of the Rumpler, of course. Maybe it was a game slightly weighted in my favour, but I think if Dean had ganged up on the Rumpler without splitting his forces initially, he would have stood a better chance than going for two separate targets. I find that the tactic of ganging up works pretty well in Wings of Glory, it ain't pretty, it ain't clever, but it works...
Labels: 1/144th AAR Aircraft Wings of Glory Wings of War WW1