As we have hit the onset of winter here in the UK, a familiar terror has recently raised its head... The varnish frost horror! We all know it, you have spent hours on some figures and they look amazing. Then comes the time for varnish and within minutes your soldiers have turned into a battalion of frosty the snowmen!
Ironically, varnish frosting always happens in winter and I have recently had to Dettol strip four Japanese tanks due to varnish frost damage. I have also found to my horror that frosting even occurs with hand painted matt varnish from a pot and not just with the spray varnish which is what I normally use.

I did some research on the internet machine and found that the reason for frosting (here comes the science...) is something to do with the molecules in the varnish reacting with, either, not fully dry paint or moisture in the air. No one can really seem to agree on the causes and the solutions are equally numerous. I have seen solutions involving re-spraying the figures (which I've tried with very mixed results, usually bad ones...), using olive oil to draw the frosting out and even praying to the moon thrice nightly dressed in a straw dress whilst beating a rhythm on a human skull fashioned into a drum.

However, I also came across some mention of using satin varnish as an undercoat before spraying and I thought I'd give that a go. I think it is something to do with the molecules of satin varnish are less likely to react with the paint or even the moisture in the air and the matt overcoat will not penetrate the satin and therefore not frost. So, I took a spare figure which I was experimenting with ink washes with recently and hand painted him in satin varnish, allowed that to dry then sprayed it matt in my normal way and let it dry it the same way that I did with the tanks. Here is how he turned out: 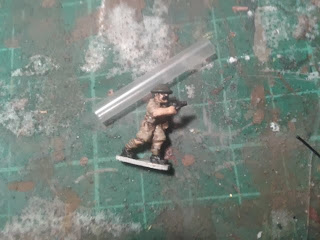 It worked! Against all the odds, not a spot of frost on the little fella! Not only that, but the matt varnish worked a treat and the shine of the satin has gone. With this new found confidence I thought I'd try out a bigger batch of figures. I have just finished painting another battalion of Japanese soldiers for Malaya, so I grabbed one base of them (three figures, I didn't want the entire battalion to get wrecked) and sprayed them with some enamel Plasti-Kote satin varnish that I found I had secreted away in a box. These were then left to dry and after that had occurred they were sprayed with Humbrol's Matt varnish. It worked again! So I sprayed the entire battalion in the Plasti-Kote and left them to dry until morning, when I sprayed them again with the Humbrol Matt. And here's the result: 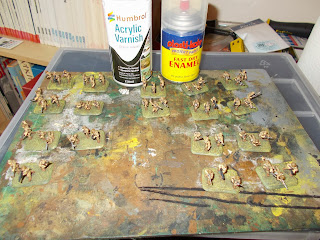 They came out perfect again! Which just goes to prove this method works and works much better than respraying frosted figures. I couldn't comment on the Olive Oil or barking at the moon as I haven't tried either...

OK, there is the issue of spraying twice and I think it's better to leave the figures to dry overnight, thereby extending the time taken to finish off, but it's well worth it for the result and confidence that there will be no frosting. Plus the satin varnish is stronger than the matt and protects your figures when being handled in games.

Thanks for reading and I hope this helps someone else!
Labels: Painting Tutorial