In this post I will demonstrate how I went about building a small trench to use in games of Rapid Fire! The  trench needed to be big enough to hold at least three Flames of War small bases, which I use to base my figures and is about the usual size of most of my companies.
So the first step was to measure this area out roughly on a piece of plasticard which was also roughly marked and then cut out: 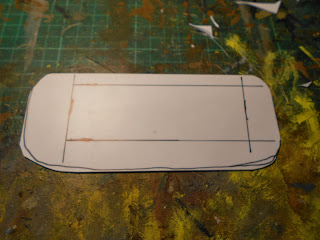 Then I cut the four internal walls of the trench from plasticard, these were measured against the figures so they would still stand above the top of the fox holes. They ended up about 15mm high, which also accounts for the bases on the figures. 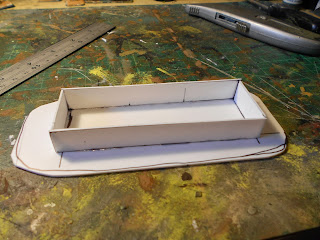 I then cut more strips of plasticard to form the slope of the trenches, using small triangles to plug in the gaps on the corners.None of these need to be perfectly straight when cut, as this adds to the shape of the earth parapets anyway. 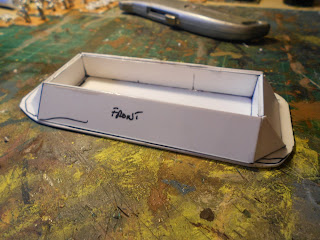 Next step was to cover this in pollyfilla to create a basic texture: 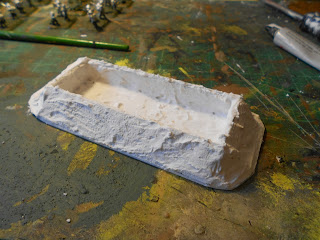 The next stage after the pollyfilla had dried was to add sand stuck on with PVA as more texture. 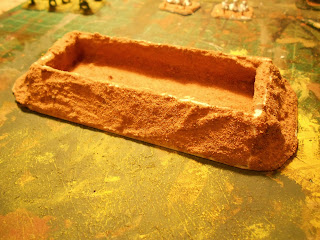 And that was it apart from the painting. This was a simple process, I started with a base coat of Burnt Umber, which was then heavily dry-brushed with Flat Earth and then Khaki. Finally I then went around the base edge with Humbrol Dark Green, which was dry-brushed with Yellow. This is an effort to try to merge the trench into the board a little. 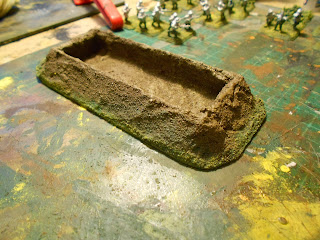 So here it is on the board with some Indian soldiers manning the parapets. 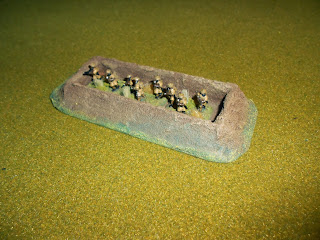 It easily fits three bases of figures and the footprint isn't too big. 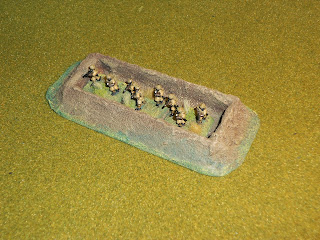 This was an experiment to see how high the trench would sit on the board. I'm not very happy with the high silhouette, but the problem is balancing a low looking silhouette against a large footprint. If I was to have the front and back more sloped to make it look more natural then I would be increasing the footprint of the piece.

I want to make some trenches for my Square Bashing games, so this was a good learning process to see how it could be done. On the positive side, it was easy to make and if I bash out a couple more at least I have some trenches for World War Two games. If you have any thoughts, please leave me a comment and thanks for looking!
Labels: 15mm scratch-building Terrain Tutorial WW2