Another Sunday, another game of Square Bashing. This time I wanted to introduce Dean and Dane to the game, so I set up another Quick Game, with the Germans attacking a British defence line during the Kaiser Schlacht of 1918. The Quick Game has 620 points for the attacker and 450 points for the defender with no assets or pre-game preparation. This translated to a German attacking force of 2 x professional battalions, 10 x regular battalions, 4 x field artillery, 2 x heavy tanks. These were pitted against 6 x regular battalions, 6 x MGs and 6 x field guns for the defending British.
Dean arrived in a quasi-British trench coat, so his role was predetermined... 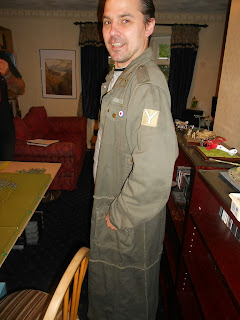 Dane and I took the attacking Germans, I controlled the ones on the left flank up to the road, he took the ones on the right flank and they amounted to five battalions for him and seven for me, each with a tank and two gun artillery support. This was the initial set up, Dean placed his line forward with a heavy MG defence on his left flank in the ruined buildings and a lighter defence on his right. His idea was to mount an aggressive defence, which is why he wasn't taking much use of the terrain. Oh well, that's his loss... The yellow dots designate the objectives. 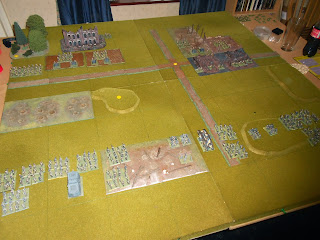 First moves for the Germans saw an advance across the entire field, the tanks were lagging behind, but both Dane and I were itching to have a crack at the defence so the infantry outpaced them. 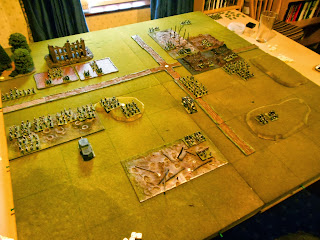 Dane's forces got in front of the dug in MGs pretty sharpish and readied for the assault: 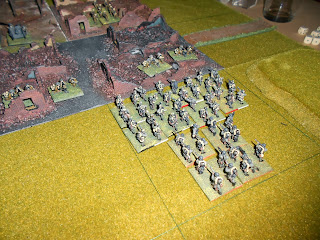 On my flank I formed up ready to push into the strung out British defence: 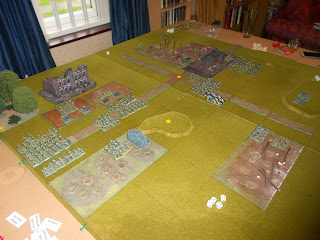 I rolled for my first assault, what a result! The Stormtroopers must have been training for this to give out damage like that (5 or 6 indicates a hit!): 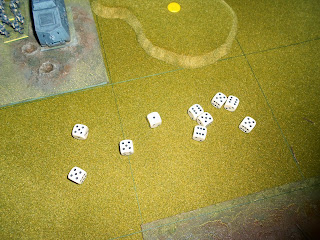 Dean's defence roll was not as good... 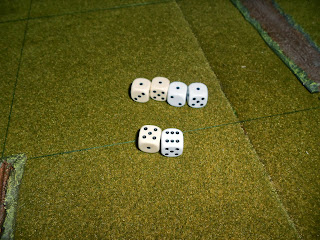 The result was a massive push through his defence in front of the ruined houses where his Higher Command were issuing their orders. 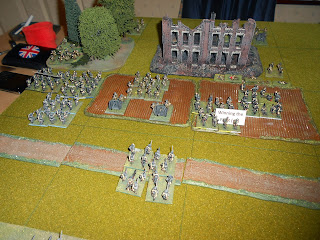 Meanwhile on the German right flank Dane's assault against the dug in MGs had the inevitable results; many casualties and no progress. It just demonstrates the need for support squares in effective assaults. 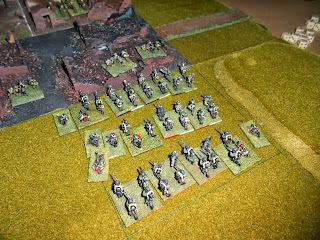 However, the crossroads objective fell into German hands with little problem, the British defence being pushed back towards their own lines: 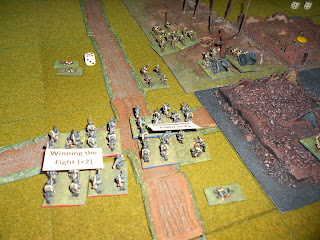 On my flank victory followed victory, the woods objective was captured, with most of the line collapsing against the German pressure. A lot of this was from the support that squares give one another in the assault. Short fronted assaults are punished by failure in the rules. 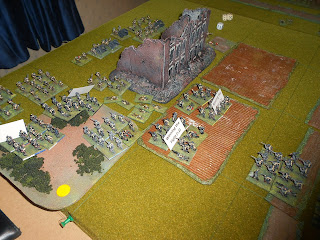 As demonstrated with another assault from Dane against the MGs which had similar results as the previous ones; more dead Germans, more jubilant British defenders being issued Winning the Fight markers! 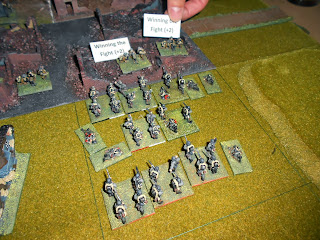 However, the last of the British right flank was surrounded in the shattered ruins, including the British Higher Command (the guns at the bottom of the picture have already been removed from the game). 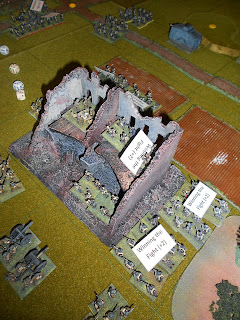 Things were looking bad for the British as the Germans started the assault: 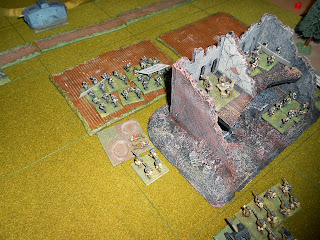 With our left flank secure and only in need of mopping up, I started to turn my attention to the right flank and began feeding troops in that direction to help Dane's faltering assaults. 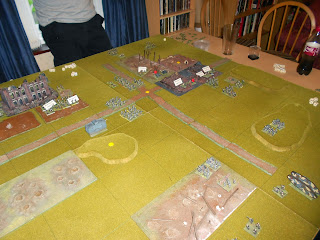 Dane was held up by the MGs in the ruins along with the field guns and Indian soldiers in the woods, it wasn't looking good here at all. 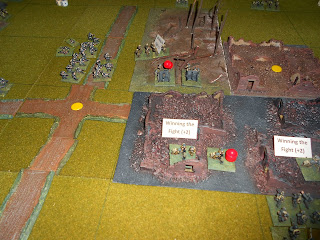 However, my fresh soldiers arrived a turn later and began their assault on the flank of the emplaced MGs: 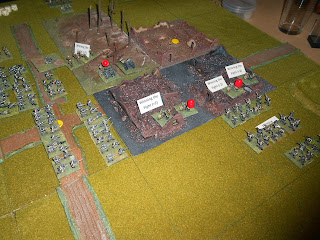 And achieved in one assault what Dane had failed to do in three... The first part of the ruins were now in German hands. 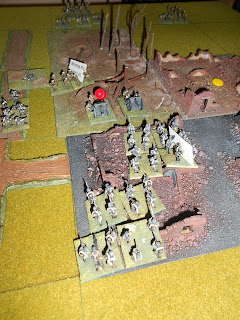 With my victory Dane was able to finally punch a hole in the remaining MGs and the objective was in sight! 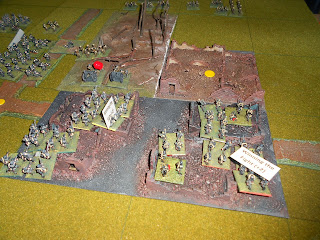 In the final game turn the last British defenders in the woods were surrounded on all sides and were destroyed to a man. 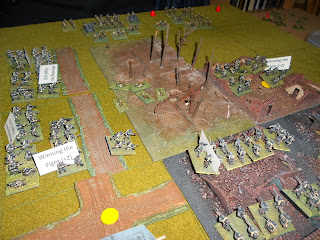 The game was over, the countdown timer hadn't even reached the end, the Germans had captured all the objectives and broken the British line completely. There wasn't even any point in counting the victory point difference as it was a clear victory. Despite losing, Dean enjoyed the game and I am now getting more used to the rules themselves so the game flows quicker with less flicking through the rule book to clarify matters. I will start adding the extra layers of rules, like the assets, in the next game and see how that goes
Labels: AAR British Germans Square Bashing WW1