I Don't Want Nobody To Shoot Me In The Foxhole, 1st Birthday post!

It's been exactly a year since I started this blog, so I guess this is our Cotton anniversary. How do you feel about it?

I'm ambivalent to be honest, so I'll tell you about some foxholes I've been experimenting with for my Rapid Fire! Malaya campaign, although the general principle can be used for any theatre or period.

For a while now, I have been wondering how to go about making some foxholes that look right without being a massive lump on the table. I saw that Command Decision make infantry sets in foxholes, which are basically just figures cut in half. So, I thought, if they can do it, why can't I? So I gathered some spare Peter Pig figures; six Indian 8th Army figures, chosen on the basis that their poses made them look like they were firing over a parapet. Then I performed some heavy duty surgery: 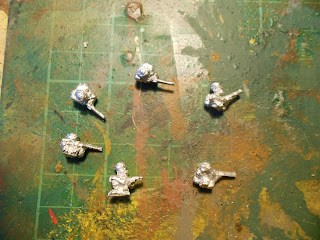 The next stage was to super-glue them to a couple of Flames of War small bases. I packed them in close as though they were stood in a three man slit trench. 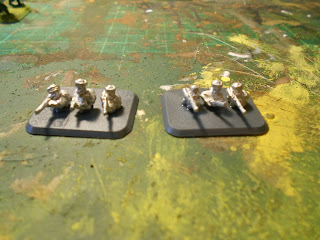 Next up, I grabbed some Polyfilla and spread some around the figures to indicate the parapet of heaped earth. This was just high enough so their rifles would be just above it. 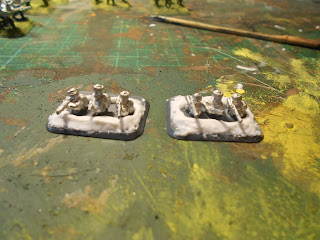 After the Polyfilla had dried, the base was then covered with PVA and sand, to add some texture to the upcast earth. 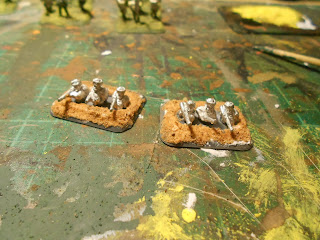 That was the last stage of preparation and it was just a case of painting them after the PVA had dried. There was no difference from the Indians I have painted recently, except that the parapet of the foxhole needed dry-brushing with various browns. I started with Vallejo Chocolate Brown, then Flat Earth and finally a highlight of Khaki. 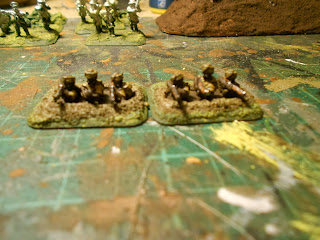 And here they are in position in front of a jungle. 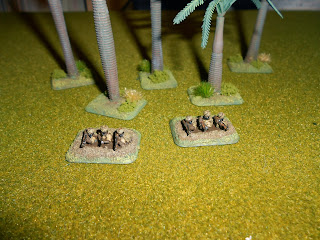 I think they fit the board pretty well, they don't stand too proudly from the surface and are quite dainty! 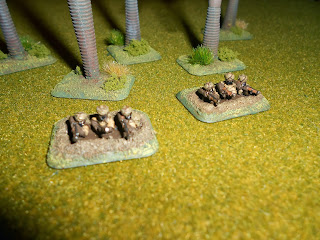 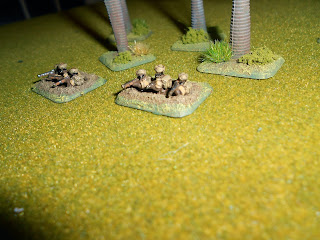 In the source book I am working from (A. Michael Sayce's Japanese World War II Scenarios Vol. Two: Malaya) it informs me that most of the British forces facing the Japanese were dug into hasty defences, just like these. What this means, of course, is that I need to buy more figures to make into these foxhole positions... Oh well, just when my lead pile was getting low...
Labels: 15mm Terrain Tutorial WW2